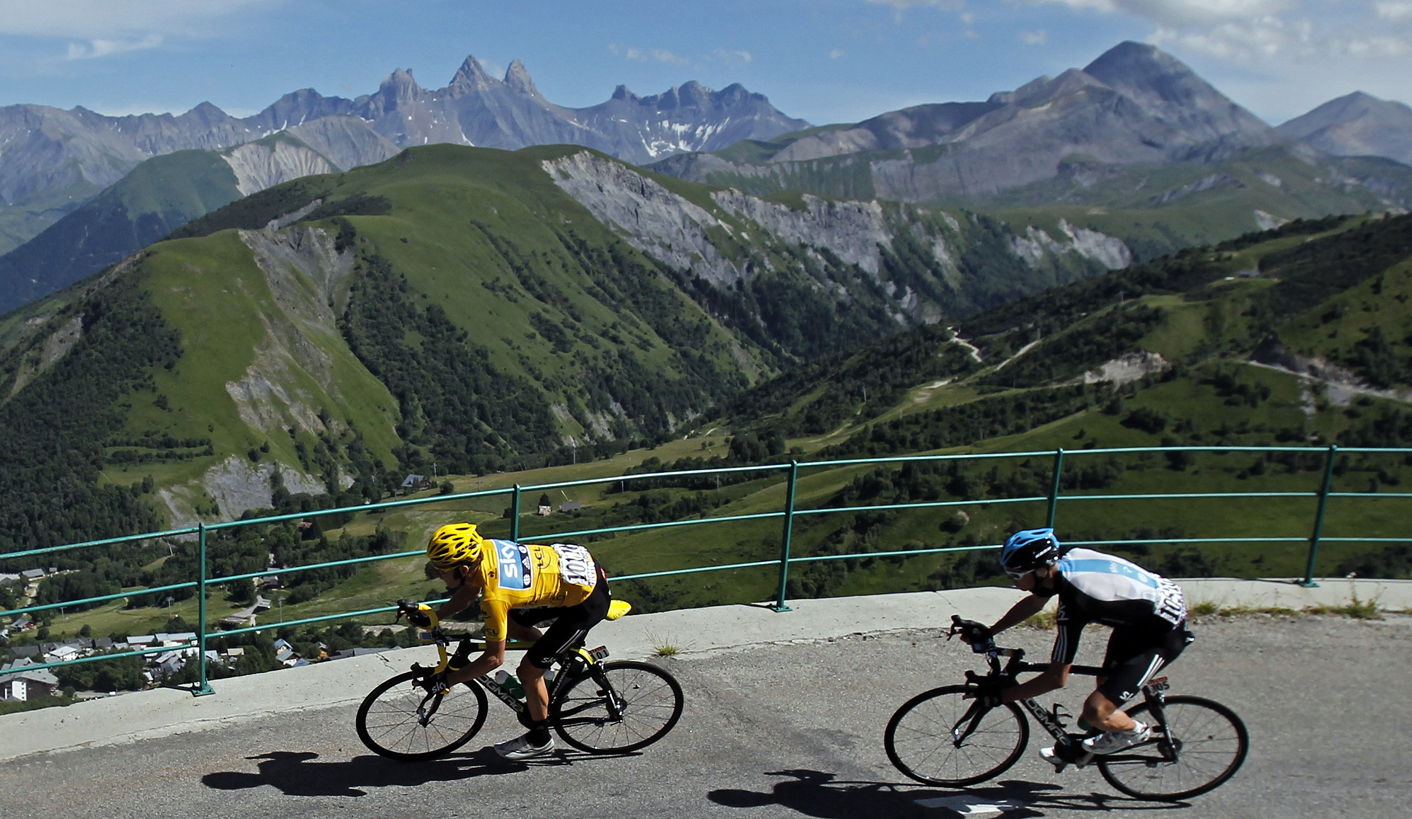 It’s that time of year, which means that men in tights are clambering up very steep mountains on bicycles. You really should be watching. An update, by RICHARD POPLAK.

Bradley Wiggins thinks you’re a cunt, and can you blame him? There you are, sucking back Windhoeks while the Team Sky train steams through another French town, over another French col, in front of another French chateau. It’s all executed with such ruthless efficiency, with such US Postal Service style… oh, wait, maybe that’s the problem? Team Sky reminds you of cycling’s dark side of the Force, and Darth, um, Bradley Wiggins—their team leader, if not their best rider—tends to channel Lance Armstrong after a taco binge. But offer the merest of hints that Wiggo and company could be juicing?

“I cannot be dealing with people like that,” said Wiggins to a press scrum. “It justifies their own bone-idleness because they can’t ever imagine applying themselves to anything in their lives. And it’s easy for them to sit under a pseudonym on Twitter and write that.” Then he dropped the C-bomb and stormed off.

Yes, it’s that time of year again. Two weeks into the 99th Tour de France, and the indignities, along with the bodies, are piling up. As always, there has been some thrilling cycling, but the Tour is so good at providing soap operatic Sturm und Drang that the racing can seem like a sideshow. Here are the basic facts: Team Sky has outspent and outmanoeuvred their rivals to get Bradley Wiggins—long their anointed general classification, or GC—into yellow, and to keep him there. In order to do this, they have sacrificed the sprinter’s crown, the green jersey usually owned by Mark Cavendish. Cavendish has won a stage, but he won it on his own, considering the fact that all of the team’s resources have been pumped into Wiggins winning it.

By “all of the team’s resources”, I’m referring mostly to the inimitable Chris Froome, who has been the best rider on the tarmac and, were life fair, would be wearing yellow. Froome was born in Kenya before relocating to South Africa, which makes him the best African cyclist to have yet squeezed into Lycra. “I could win this tour,” Froome recently said. “But not at Sky. I cannot lie to you, it’s difficult, but it’s my job. It’s a very, very great sacrifice. But we have a strategy around Wiggins, and everyone respects it.”

The past week in the Alps revealed Froome’s climbing genius – his attack on stage 11 to the summit of La Toussuire was aborted because Wiggins was not on his wheel. Froome sheathed his prowess, but there is no doubt that he will demand the full support of his team for the next Tour, and that he will stand beside Wiggins on the podium come Paris, an unsmiling and taciturn number 2.

Ah, but we’re getting ahead of ourselves. There are absolutely no guarantees in life, and even fewer in cycling. With the Pyrenees looming, anything can happen, and Wiggins could falter. Team Sky will have no choice but to let Froome loose, because Vincenzo Nabali and Cadel Evans—both several minutes back but still threatening—could make a play. It’s very easy to drop five minutes on a mountain stage, and while Wiggins is a time-trial dynamo, he will need a cushion leading into the penultimate day’s solo ride.

Team Sky’s dominance has threatened to overshadow a breakout performance by Peter Sagan, the 22-year-old Slovakian who belongs to Liquigas-Cannondale. Sagan has won three stages, sprinting on uphill finishes to slaughter the pack. He hasn’t exactly come out of nowhere—he threw down the gauntlet at Tour of Spain, the Tour of Switzerland and Tour of California—but this was his debut at the Big Show. Cycling’s stodgy powers that be have sniffed at his antics—a wheelie, a couple of dance moves as he crossed the line—but Sagan is here to stay. Those were not his last Tour stage wins – he’ll be a presence in France for years to come.

There have, of course, been the wipeouts—one of which all but eliminated Team Garmin-Sharp, who were victorious last month at the Giro d’Italia, and felt they could make a play with Ryder Hesjedal for a top-five finish. Not to be, after both Hesjedal and South African Robbie Hunter hit the decks on stage 6. It seems obvious to those who have followed Hesjedal’s career that he could have done some damage, but the formerly disgraced English rider David Millar won stage 13 for that team, by sheer force of will and personality.

That said, the truce won’t hold. Nor do we want it to. The stage winner on Sunday, Luis Leon Sanchez, is a member of Rabobank—also decimated by foul luck and bad crashes. It was a huge win on a tough stage, a stage that proved cycling is a sport that defies simple narratives.

This final week will be a corker. The smart money is on Wiggins, but, in truth, there is no such thing as smart money. We’ll see you in Paris next Sunday. The only guarantee is that the Tour will end there, then. Probably. DM