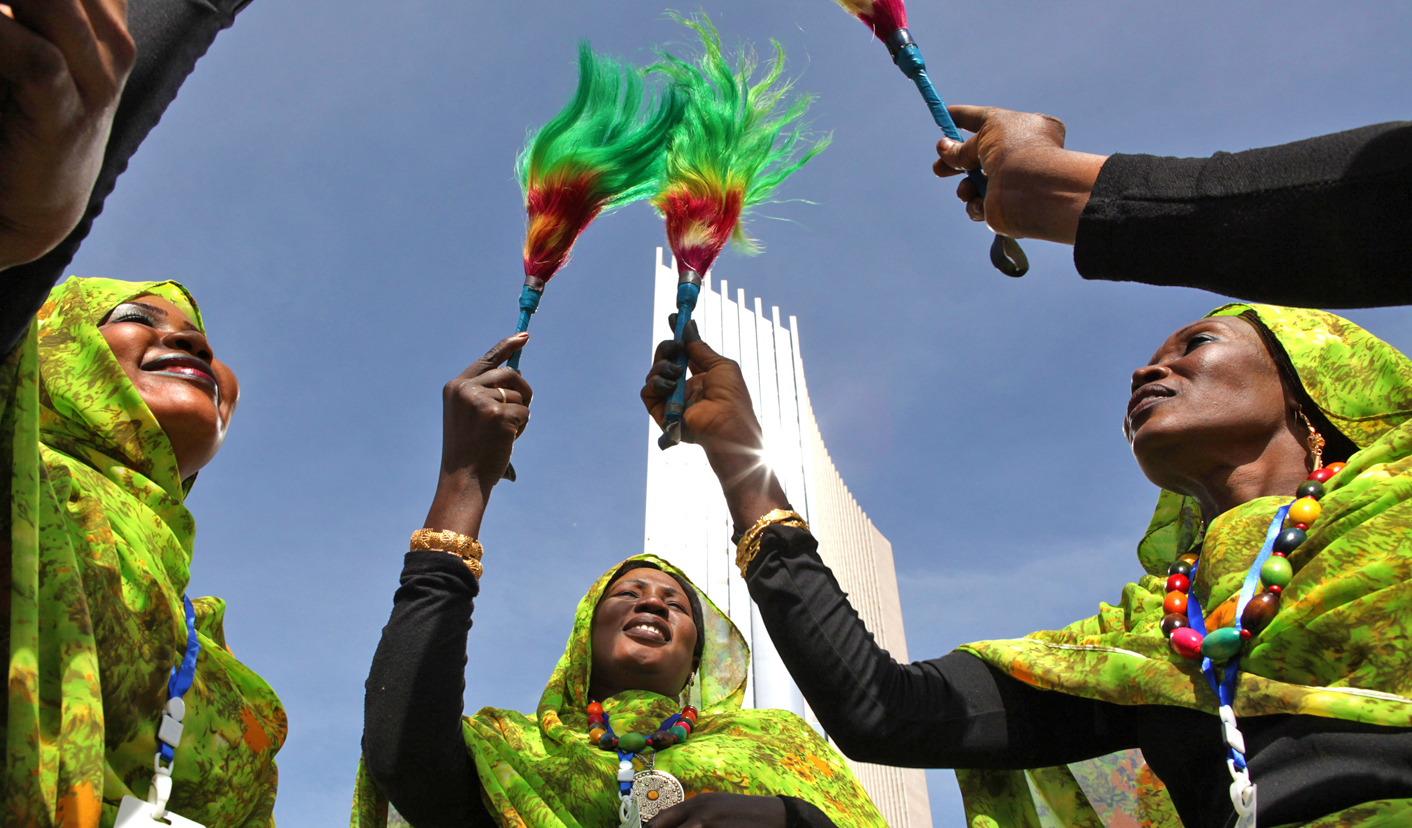 As the dust settles in Addis, Dr. Nkosazana Dlamini-Zuma won’t have much time to celebrate. There’s a continent to fix, after all. SIMON ALLISON runs through the issues that need the most urgent attention.

For better or worse – and the policy has always had its critics – the African Union, and the Organisation of African Unity which came before it, were both always based on the idea of consensus. Votes were for people who couldn’t talk things through and reach a mutually beneficial agreement. While often completely impractical, this utopian vision helped forge those warm and fuzzy feelings of pan-Africanism and unity; sentiments which characterise much of the body’s rhetoric.

But Dlamini-Zuma can forget about consensus for the time being. This toxic leadership battle has laid bare the continent’s divisions. No, it’s nothing to do with Francophone v. Anglophone; South Africa’s key opponents were Kenya, Nigeria, and Ethiopia, all of whom are nominally in the Anglophone camp. Instead, it’s geographic – and all about proximity to South Africa. We have a sphere of influence across the continent, one that extends over our borders as far up as Angola and Tanzania; beyond that, however, South Africa has now lost almost all of its political capital. And the hostility generated by the aggressive approach of both sides means that arguments over the continent’s future are likely to be contested, probably with a bitterness rarely seen in Addis Ababa before this year. Someone is going to have to calm tensions and bridge these divisions. Unfortunately, that someone was part of the problem to begin with, and it will take all of Dlamini-Zuma’s diplomatic powers to restore some semblance of unity to the continental body.

The major stain against Jean Ping’s record is that while he was elected as a technocrat, and given the mandate to turn the AU into a streamlined, modern organisation, he has done anything but that. The latest reliable figures are from January, and they are a damaging indictment of his ability to manage his resources. On the personnel side, the body has 324 vacant posts; that’s some 48% of its staff complement. No wonder it struggles to get things done. And, surprisingly, money is not the issue here. On average, departments spend only 37% of their budget.

So, the challenge now is to fill these positions and get departments to spend their budgets. That’s not as easy as it sounds. Finding qualified people and persuading them to move to Addis Ababa is always difficult, and there’s a delicate balance to be struck between meeting budgets and just wasting money. But if the AU wants to be taken seriously, then it needs to happen, quickly.

The war in Somalia is reaching a climax. Over the next couple of months, two things will happen that will dictate the course of the country for decades. First, the mandate of the Transitional Federal Government, the country’s official government, which sits in Mogadishu and can’t control even that without external assistance, expires. The idea is to replace the bloated, corrupt TFG with a more streamlined and representative government that might have a better chance of popular buy-in. Second, Kenyan troops – operating now as part of the African Union Mission in Somalia – will mount an assault on Kismayo, Al Shabaab’s de facto capital and source of much of the militia’s revenue. If their previous form is anything to go by, Al Shabaab will retire without much of a fight, knowing they can’t win a conventional war, and focus instead on continuing their very effective guerilla campaign.

The best case scenario? That a lack of popular support and the creation of a new government, which is a genuine, inclusive alternative, undermines the rationale for Al Shabaab’s support, making it harder and harder for the group to operate. The worst case scenario is something we’re all familiar with from Afghanistan; an artificial, externally-supported government with little to no local support, and a rebel group able to wreak havoc at will, given legitimacy by the foreign invaders.

The position of the African Union, which by virtue of its military presence will lead negotiations around Somalia’s future, could be the difference between these two outcomes. Strong leadership is required to avoid repeating mistakes made in the past – specifically, allowing political solutions to be dominated by the disastrous ‘war on terror’ rhetoric which denies the nuances of militant groups like the Taliban or Al Shabaab. If negotiators are clever, they will welcome certain elements of Al Shabaab back into the fold, specifically the powerful nationalist faction which is more interested in land rights than a global jihad. A genuinely inclusive government must, after all, include Al Shabaab, who for better or worse (for worse, most of the time, but still) have run most of the country for nearly a decade.

Mali is not a problem of the African Union’s making. As the international effort to unseat Gaddafi gained steam last year, the AU was very clear that the Libyan intervention was a bad idea, partly because of the destabilising effect it would have on the entire region. And so it came to pass; fighters returning to Mali from Gaddafi’s service sparked long-existing tensions in the north of the country. The rebellion there led to a coup which displaced the government based in the south, oft-praised for its commitment to democracy, creating the unbelievably messy situation we have today: an illegitimate national government in Bamako, a low-intensity civil war between the Islamist and (relatively) secular factions of the northern rebels, the still shadowy presence of al-Qaeda in the Islamic Maghreb in the vast desert, threats of international military intervention, and the destruction of some of Africa’s finest heritage in Timbuktu.

The AU will have to lead efforts to clean up this mess. Already, they have lent support to the threats of West African regional body Ecowas to send troops to clean up the northern rebels. But a firmer hand might be needed: Ecowas itself is a compromised actor in Mali, trusted by neither the rebels nor the coup leaders. The other option is that the international community gets more involved, which is dangerous because the public pronouncements of the likes of the American government have made clear that it is al-Qaeda that they are really worried about – never mind that al-Qaeda has, at best, a marginal influence on the Malian quagmire, and is mostly irrelevant to the solution. Mali needs to sorted out, and quickly, because already the instability is taking on a regional dimension, with refugees flooding into neighbouring Niger, and Mauritania launching cross-border raids on the pretext of defending its own national security.
So what can the AU actually do? It’s most important role is to ensure that intervention, if it comes, is aimed at solving the political problems rather than enforcing a particular world view. This may lead to uncomfortable accommodations with rebels and coup leaders, but it’s a small price to pay for the return of some kind of stability to the Sahel. Again, strong, firm leadership is required – both to figure out a solution and to put a stop to potentially damaging solutions proposed by others.

So far, the AU has been largely content to ignore the festering conflict in the eastern DRC, knowing it has its hands full in other arenas and that the United Nations – through its stabilising mission Monusco – is leading the international involvement there, with tanks and helicopter bombardments as deemed necessary. But slowly a local conflict is morphing into something larger and far more dangerous, with fighting on the Ugandan border and repeated reports that Rwanda is supplying the rebel movements with arms and even personnel. There are unmistakeable echoes in the situation now with the events in 1998 which precipitated one of the most catastrophic wars since World War II. Known as the Great African War, the fighting centred on the eastern DRC and drew in eight African countries, leaving hundreds of thousands dead and millions more displaced.

As the current tensions in the eastern Congo grow, so the AU will need to take a more active role in mediating the conflict; particularly, it will need to prevent neighbouring countries from getting involved with all guns blazing, turning a small but serious conflict into something much worse. DM