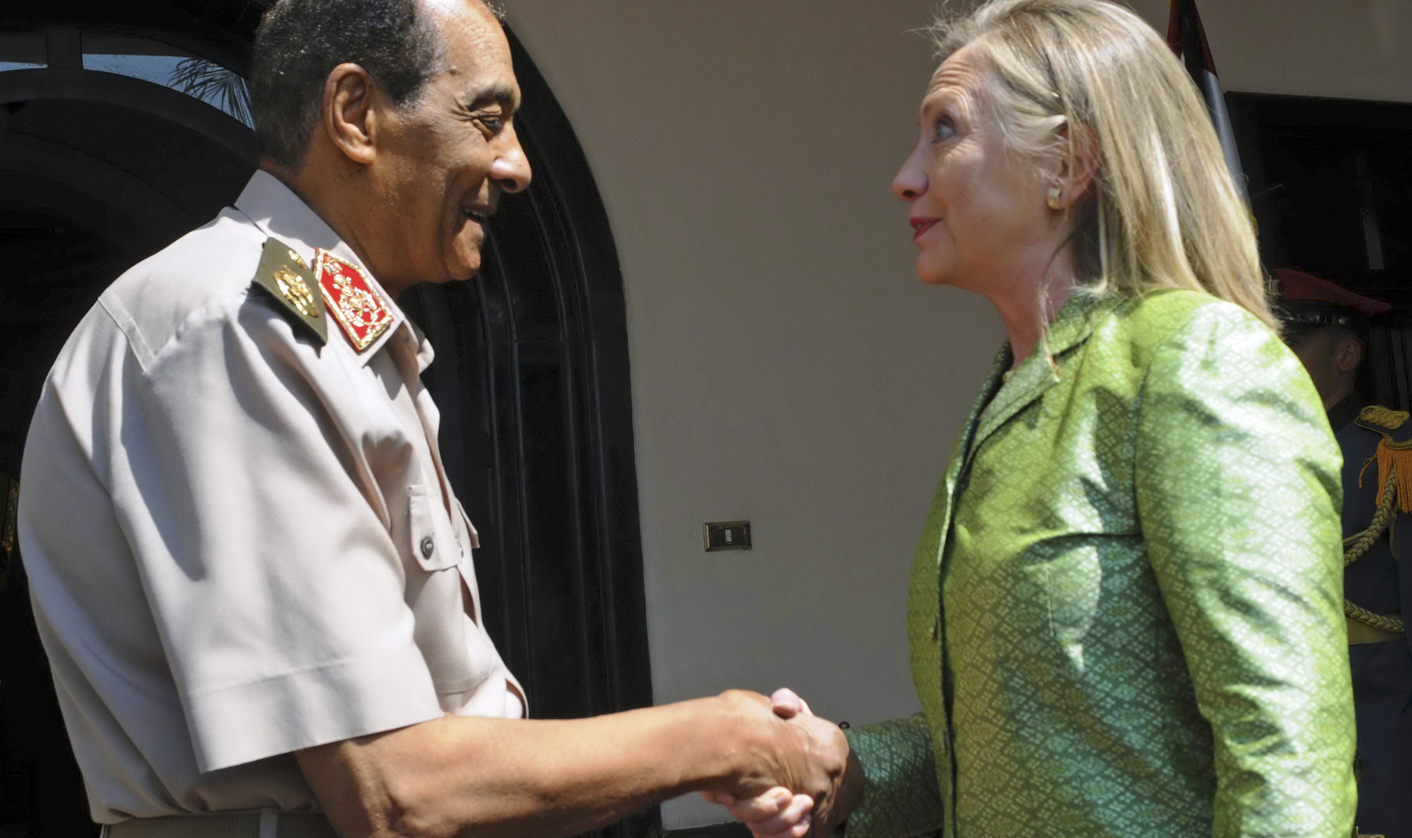 Protesters threw tomatoes and shoes at U.S. Secretary of State Hillary Clinton's motorcade on Sunday during her first visit to Egypt since the election of Islamist President Mohamed Mursi. By Arshad Mohammed.

A tomato struck an Egyptian official in the face, and shoes and a water bottle landed near the armoured cars carrying Clinton’s delegation in the port city of Alexandria after she gave a speech on democratic rights.

A senior U.S. official said neither Clinton nor her vehicle, which was around the corner from the incident, were hit by the projectiles, which were thrown as U.S. officials and reporters walked to the motorcade after her speech.

It was not clear who the protesters were or what were their political affiliations. Demonstrations have become common in Egypt since former President Hosni Mubarak, long-time U.S. ally, was brought down by mass street protests last year.

Egypt is gripped by political uncertainty as two major forces, the military and the Muslim Brotherhood, engage in a power struggle over the future of a country that remains without a permanent constitution, parliament or government.

In her speech at the newly re-opened U.S. consulate in Alexandria, Clinton rejected suggestions that the United States, which had long supported former Mubarak, was backing one faction or another in Egypt following his ouster last year.

“I want to be clear that the United States is not in the business, in Egypt, of choosing winners and losers, even if we could, which of course we cannot,” Clinton said.

“We are prepared to work with you as you chart your course, as you establish your democracy,” she added. “We want to stand for principles, for values, not for people or for parties.”

The meeting came a day after she met Mursi, whose powers were clipped by the military days before he took office.

Mursi fired back by reinstating the Islamist-dominated parliament that the army leadership had disbanded after a court declared it void, deepening the stand-off before the new leader even had time to form a government.

In their hour-long meeting, Clinton and Tantawi discussed Egypt’s political transition, the military’s “ongoing dialogue with President Mursi,” and the country’s economic troubles, a U.S. official travelling with Clinton said in an email brief.

“Tantawi stressed that this is what Egyptians need most now – help getting the economy back on track,” the official said.

The talks also touched on the increasingly lawless Sinai region and the Israeli-Palestinian peace process.

Speaking after the meeting, Tantawi said the army respected the presidency but would not be deterred from its role of “protecting” Egypt.

“The armed forces and the army council respects legislative and executive authorities,” he said in a speech to troops in the city of Ismailia. “The armed forces would not allow anyone to discourage it from its role in protecting Egypt and its people.”

Ties with the United States, which provides Egypt with an annual $1.3 billion in military aid, were strained this year when Egyptian judicial police raided the offices of several U.S.-backed non-governmental organisations on suspicion of illegal foreign funding and put several Americans on trial.

The spat ended when Egyptian authorities allowed the U.S. citizens and other foreign workers to leave the country.

Clinton said Washington wanted to support “real democracy,” in which “no group or faction or leader can impose their will, their ideology, their religion, their desires on anyone else.”

She delivered a similar message in earlier meetings with women and Christians, both groups that fear their rights may be curtailed under a Muslim Brotherhood-dominated government.

“I will be honest and say some have legitimate fears about their future,” she said. “I said to them … no Egyptian, no person anywhere, should be persecuted for their faith, or their lack of faith, for their choices about working and not working.

“Democracy is not just about reflecting the will of the majority. It is also about protecting the rights of the minority,” she said.

The United States had learned that “the hard way,” Clinton said, noting the U.S. constitution originally did not protect the rights of women or slaves. DM