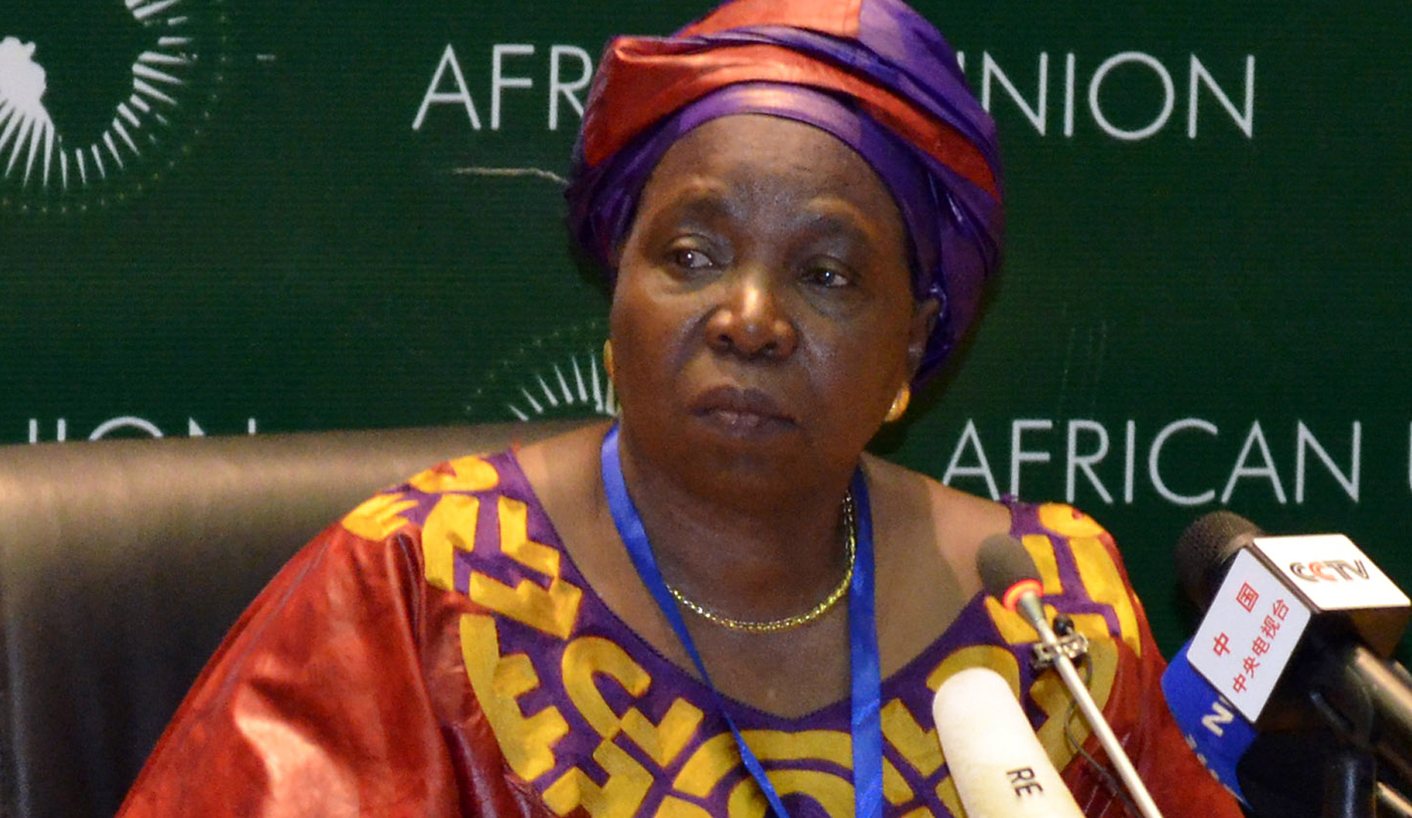 The election for the new chairperson of the African Union Commission kicked off on Sunday evening with little hope for ending the deadlock that has severely handicapped the Commission this year, but the result was astounding. South Africa succeeded in getting Dr Nkosazana Dlamini-Zuma elected to the highest office of the African Union. By KHADIJA PATEL.

“It is a victory for South African diplomacy,” Clayson Monyela, spokesperson for the Department of International Relations and Co-Operation (DIRCO), enthused from Addis Ababa late on Sunday. Against all odds, well-formed analyses and popular opinion, the Southern African Development Community (SADC) candidate, Dr Nkosazana Dlamini-Zuma, was elected chairperson of the African Union Commission. It was a result that caught even seasoned African policy wonks by surprise.

Jakkie Cilliers, Executive Director of the Institute for Security Studies (ISS) was convinced that the African Union was headed for another stalemate. “The win was not expected,” he said after the election. “What was expected was another stalemate.”

Despite the boundless optimism proffered by South African diplomats in recent weeks, various reports indicated the SADC’s campaign juggernaut, graciously funded by Angola, had achieved little except to infuriate their counterparts in the rest of the continent. “South Africa seemed to have severely damaged its Africa policy,” Cilliers observed. “I spoke to many, many of the delegates at the (AU) summit and nobody expected the SADC campaign to be successful.”

“The Nigerians are shell-shocked,” Cilliers noted with a chuckle.

Conversely, Monyela said Dlamini-Zuma’s campaign team had been encouraged by the response they had received. “The feedback we received in recent days showed us that the argument that South Africa and the SADC had put forward in favour of Dr Dlamini-Zuma had been accepted,” he said.

And yet minutes before the closed voting session on Sunday, incumbent candidate Jean Ping was still defiantly optimistic. “They will not win,” he told a journalist from Notre Afrik. “Maybe there will be a blockage.”

Monyela, however, insists Ping knew what was coming. “He realised the tide had changed,” he said. “But obviously he thought he still stood a chance.”

On Saturday, the South African government released a statement laying bare its reasoning for pursuing this position with such gusto. After all, South Africa has now sacrificed one of its most competent ministers for the greater good of the African continent.

How very noble. But does the Jacob Zuma government really hold the “Africa agenda” in such high esteem? Zuma is certainly no Mbeki, championing the African cause with Bible-thumping enthusiasm.

“This has been about empowering the AU, ensuring the AU rises above criticism to find African solutions for African problems,” Monyela said.

The campaign to deliver Dlamini-Zuma to the AU headquarters demonstrates as well South Africa’s ambition for greater political clout in multi-lateral organisations, a hunger for more power, and a deep-seated need to be recognised as a powerbroker.

Cilliers said after the election that Dlamini-Zuma’s candidacy for the AU seat was pursued with such valour in order to facilitate South Africa’s greater campaign for permanent representation on the UN Security Council. “The South African campaign for a permanent seat on the Security Council is particularly important to (DIRCO) Minister Maite Nkonae-Mashabane,” he explained.

Cilliers also acknowledged the ramifications of Dlamini-Zuma’s successful election to the AU Commission chair on domestic politics. Many analysts believe the entire campaign was the latest move in President Zuma’s highly convoluted strategy to win himself a second term in office.

“After saying that, though, we should look at the official statement and accept what it says at face value,” Cillers said, adding: “Many will struggle to accept the government’s explanation at face value simply because South African foreign policy has lacked coherence so people distrust their motives.”

What exactly has changed since January, when Ping won the majority vote in each round of the election but fell short of winning the requisite two-thirds majority after the SADC abstained from voting in the final round?

Tellingly, Monyela credited the “high-level consultations” for Dlamini-Zuma’s success in Addis Ababa. The jury is still out on how exactly the SADC strong-armed itself to present a famous victory to Dlamini-Zuma on Sunday, but according to Monyela, the campaign was above board.

“It was a clean, honest campaign,” he said.

“We deployed a massive, massive campaign,” Monyela explained. “We visited every country, spoke to people and offered them our rationale – nobody could argue with our rationale.” That rationale was designed to fight back against the African Union, presenting Dlamini-Zuma as the most able person on the continent to rescue the organisation from disarray.

Cilliers, however, remains determined to correct the perception that Ping was bad at his job.

“Ping was not a bad chairperson. He did quite well for the AU – especially compared to his predecessor,” he said, following the announcement.

The mudslinging between Ping and the SADC in recent days did, however, remove some of the shine from Dlamini-Zuma’s election. Things took a particularly ugly turn after a Sunday Times article last week alleged that Ping was considering withdrawing from the race after a trip to South Africa. Ping responded with righteous indignation, attacking South Africa with venom – and that, too, while using official AU infrastructure.

“Like all elections, come at the end of the day, it becomes personal,” Cilliers noted. “South Africa was first to personalise their campaign against Ping. They goaded him into retaliating.” South Africa, then, was wily enough to play to Ping’s weakness.

“You can sense his anger in the letter he wrote rejecting the media reports but he went too far and South Africa was able to exploit his weakness.”

Unlike in January, this time around Dlamini-Zuma was able to win a majority in the first round of voting, building on that majority in three successive voting rounds until she eventually won the requisite two-thirds majority. Cilliers, however, emphasised that this was a closely-run fight and could just as easily have descended into another stalemate. He noted that as much as South Africa and the SADC may have played their cards perfectly, there was a certain element of luck that delivered the victory as well.

“Luck played a great role during the election,” he said. “The absence of two key figures from the Summit, Ethiopian prime minister Meles Zenawi (who is reportedly receiving treatment for an illness in Brussels) and Nigerian president Goodluck Jonathan, was crucial. They could have lobbied for further resistance to the SADC campaign.”

Cilliers also added that Ecowas was stymied by the suspension to two member states. Both Mali and Guinea-Bissau have been suspended by the AU for coups in their countries – leaving Ecowas with two fewer votes than they had in January – two votes that may well have proved a difference in the first round of voting.

Speaking to journalists afterwards, President Jacob Zuma, said to have been visibly battling to contain his emotion, is reported to have hailed Dlamini-Zuma’s election as an example of the empowerment of women, a sentiment echoed by Cilliers.

“The fact that South Africa could pull this off is a feather in its cap,” Cilliers admitted. “It is certainly the best possible outcome.”

African diplomats blame the stagnation in the African Union on the late Muammar Gaddafi’s grand schemes for hampering progress in AU summit. Gaddafi’s many pipe dreams used up too much time and resources for the AU to actually work, or the AU summits to be anything more than a careful management of a gargantuan ego.

And yet, since Gaddafi’s demise, the AU’s summits have focused largely on leadership. The work of the African Union has this year been overwhelmed by the battle for control.

The challenge, then, for Dlamini-Zuma – after she is confirmed Chairperson of the AU Commission on Monday – is to steer the AU away from the ugly remnants of this fight. DM