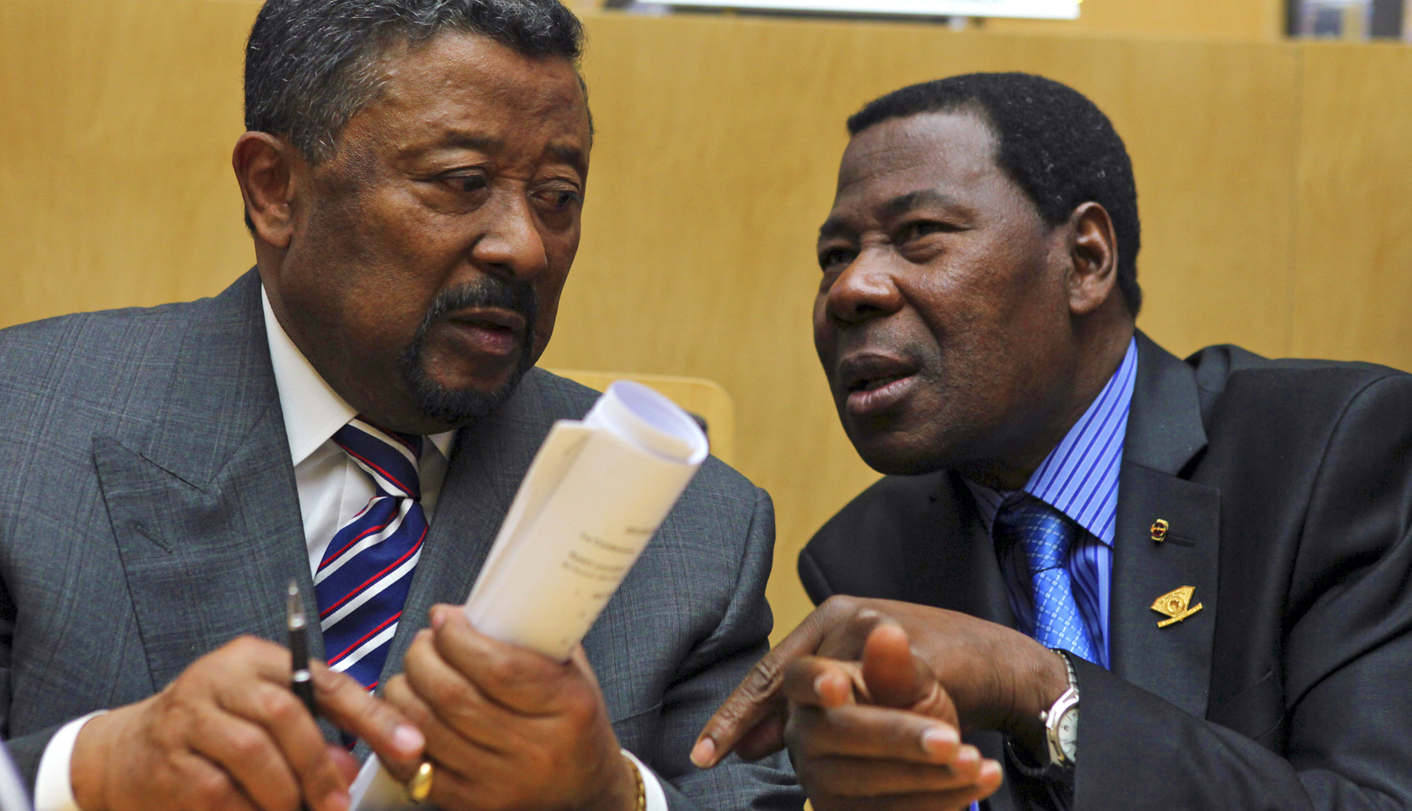 Here we go again. Six months after the first botched AU leadership contest, the same candidates will compete for the same position in the same venue. Why, SIMON ALLISON wonders, do South Africa’s diplomats expect a different outcome?

An air of optimism preceded the last African Union summit in January. The much-maligned continental body was meeting in its own glitzy new headquarters, the first time it hadn’t had to borrow floor space from the United Nations Economic Commission for Africa, also based in Addis Ababa. The dust kicked up by the Arab Spring had not yet turned into a quagmire, and the air was thick with talk of change and opportunity.

Best of all, as far as seasoned summit-goers were concerned, there was no chance of Muammar Gaddafi disrupting proceedings with his interminable speeches or customary disregard for protocol and regulations. Without the Libyan dictator walking around like he owned the place (to be fair, he did; or at least was the major shareholder), things were bound to proceed with unprecedented efficiency.

And so they did, for the most part. Some sessions even ran on time. Until the last day, and the most important session, where the African Union revealed that while it may have lost Gaddafi, it retained his fondness for farce.

South Africa got the ball rolling on this one a few months before the summit, when we unilaterally announced – after cursory consultations with SADC countries – that we would nominate home affairs minister Nkosazana Dlamini-Zuma for the position of Chairperson of the AU Commission, the top job in the body’s secretariat. Dlamini-Zuma was up against the incumbent Jean Ping, a Gabonese diplomat with a nondescript record in the role. Not too bad, but not very good, he was known as a technocrat that kept things ticking over without making any waves.

In South Africa, Dlamini-Zuma’s nomination was greeted with joy by a pliable press that knew little about African politics (the consequences of outsourcing almost all African coverage to wires). Her reputation is fantastic, after all, both as home affairs minister and at the department of foreign affairs before that, with rescuing sinking ships being a special skill. And what ship needs rescuing more than the rudderless AU? She’s also a woman, and her appointment would be a strong symbol of gender equality in the male-dominated world of African politics. Moreover, southern Africa felt it was due a turn to lead (this last being a dubious argument; Salim Ahmed Salim was the longest-serving leader of the former Organisation of African Unity, and he’s from Tanzania, which is a SADC country).

Very pleased with their decision, South African diplomats and top-level government officials fanned out across Africa to secure support for their chosen candidate, fuelled by an almost missionary zeal that she could could reform the AU’s stagnant institutions and turn it into a genuine force for development, as well as a firm belief that Africa was ready to let South Africa – the economic and political superpower of the continent – take its rightful place at the top of the table.

Most of Africa, with the exception of the SADC region, had other ideas. In the capitals that really matter – Abuja, Addis Ababa, Cairo, Nairobi – Dlamini-Zuma’s candidacy was seen as a blatant South African attempt to seize control of the African Union, taking over where Gaddafi left off. This feeling was compounded by South Africa’s biggest strategic mistake in this whole mess: not consulting with the major powers beforehand, and presenting Dlamini-Zuma as a fait accompli. Especially as an unwritten agreement between the major powers decreed that the chairperson position should be left for candidates from smaller countries, giving these countries a chance for some continental influence and preventing petty squabbles between Africa’s powerhouses.

And the candidate herself was a problem. Not on a personal or professional level, for she is widely respected and well-known after her tenure at foreign affairs, but on a symbolic level. She is, after all, Jacob Zuma’s ex-wife; could she really maintain her independence, or would she be under Pretoria’s thumb?

The showdown came at that African Union summit in January. Only heads of state are allowed to vote in this particular election, and the ballot is secret. To win, either candidate needed more than two-thirds of the vote. Neither got it – but South Africa was the biggest loser, unable to unseat the relatively unpopular incumbent and only receiving support from a handful of countries outside of its southern African stronghold.

As Khadija Patel and I wrote at the time: “The ugly truth is [that] Dlamini-Zuma failed to win even a simple majority in any of the four rounds of voting. It was a stunning defeat, an absolute rejection of South Africa’s attempt to make Africa in its own image, and a humbling dose of reality for those in our government who had overestimated our influence on the continent.  What makes it sting all the more is that the betrayal was personal. The votes were cast by the assembled heads of state themselves, most of whom Jacob Zuma had taken much time and trouble to lobby on his ex-wife’s behalf.”

Again, South Africa appeared hopelessly out of touch with reality; singing and dancing their way out of the conference hall, celebrating their Pyrrhic “victory” in preventing another term for Ping; scenes reminiscent of Bafana Bafana’s infamous victory lap that wasn’t.

And so the continent was left headless, with Jean Ping allowed to continue his lame-duck tenure until the vote could be held again at the next AU summit. The thinking was that the six months between January and July would be plenty of time to fashion some kind of compromise and find the consensus which is so important in African politics.

With just two days left until Sunday’s vote, no compromise has been reached. Instead, both sides have redoubled their campaigns, with Jean Ping receiving particularly enthusiastic backing from Nigeria. Officials at South Africa’s department of international relations and cooperation are confident, however, that the situation has changed. Although they readily admit that Dlamini-Zuma has no chance of achieving that elusive two-thirds majority, they think that she will win by a simple majority, and that should be enough to put South Africa in the driving seat during the protracted negotiations that will follow. It’s a risky strategy, especially given the apparent lack of any plan B.

Chances are the continent is heading for another stalemate. South African arrogance, combined with a continental propensity for stubbornness, are proving that even the absence of mad Colonel Gaddafi has not made the AU any more sensible than it was before. DM