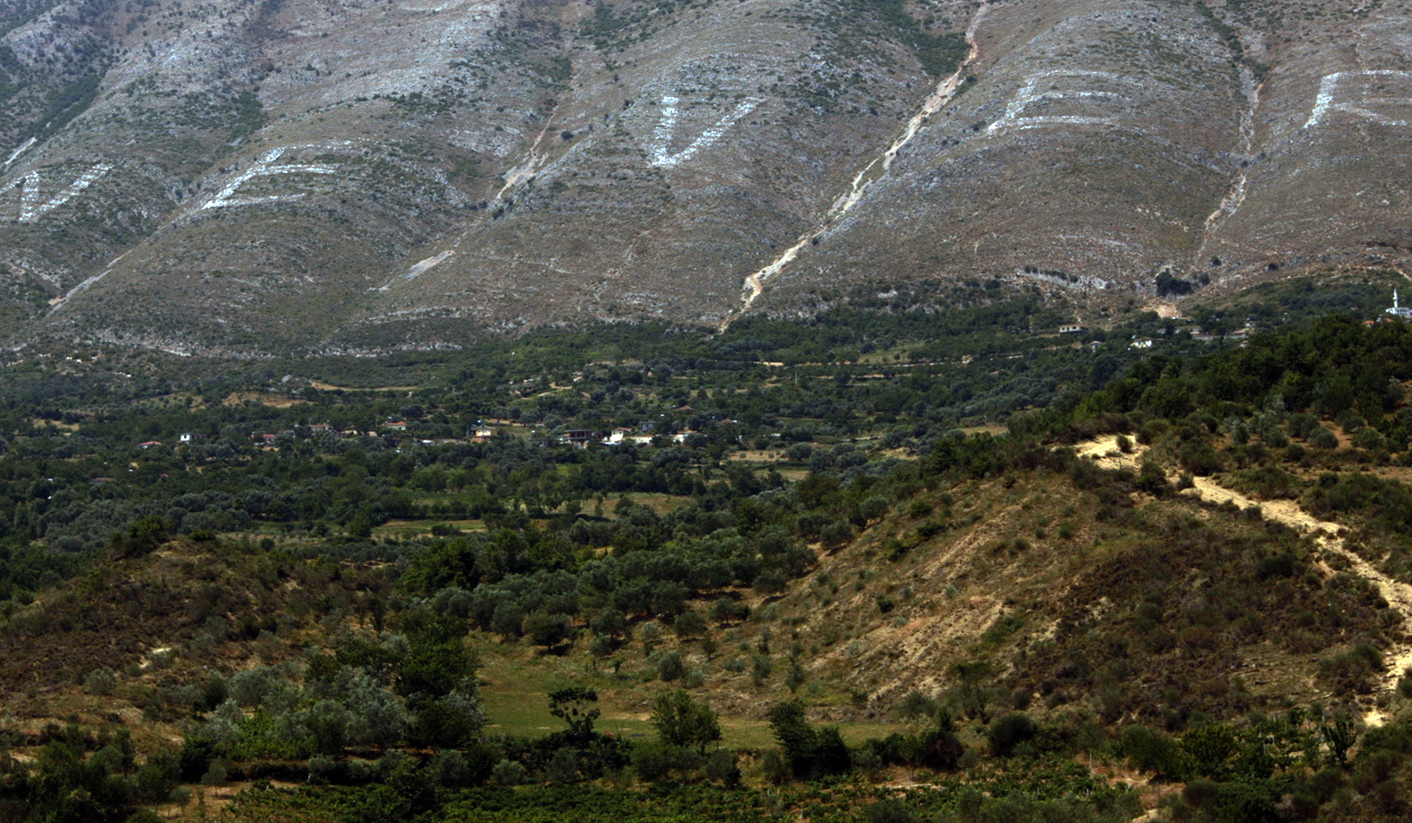 It took Sheme Filja 10 days and an army of villagers to paint the name "ENVER" on the side of Albania's Mount Shpirag in 1968, in tribute to then communist dictator Enver Hoxha. By Benet Koleka.

The 100-metre-high letters still dominated the skyline above Berat, Albania’s oldest town, when Hoxha died in 1985 and communism crumbled in 1990.

They faded under napalm attack when Albania’s first-democratically elected government deployed the army in 1994 to wipe Hoxha’s name from the mountain. But Filja restored them three years later at the behest of diehard communists.

Now, as part of a documentary project, the 58-year-old farmer has swapped the first two letters with the help of his nephew and a whitewash pump, leaving the word “NEVER” to tower over Berat for the foreseeable future.

Filmmaker Armando Lulaj says the act represents a swipe at Hoxha’s Stalinist brand of Balkan communism and the slow pace of progress under the cosy political clique that replaced him.

“At the time, the name of the dictator Enver Hoxha was written on this mountain,” said Lulaj, 32.

“Now, alone on this mountain, (Filja) wants to scream about the situation we’re living in, so he’s changed the first two letters and it has become NEVER.”

Albania is dotted with such expressions of Hoxha’s personality cult and of the odd paranoia of his isolationist regime, most famously the estimated 1 million pillbox bunkers that once guarded against invasion.

Filja, in a white Coca-Cola hat, recalled mules carrying whitewash up the mountainside back in 1968, and villagers clearing bushes and painting the bare rock before Hoxha’s birthday on Oct. 16.

Each letter was 100 metres high and 60 metres wide.

“When the army attacked them with napalm, fire and flames, the letters almost disappeared. We could still make them out, but a stranger couldn’t spot them,” Filja said.

Hired by hardline communists in Berat, Filja spent two weeks in 1997 making the letters as good as new. The painting became a tourist attraction in Berat, an ancient town in central Albania dating back 2,500 years.

The road from the capital Tirana to Berat passes an oil exploration rig run by Petromanas and Royal Dutch Shell Plc, a mark of the foreign investment that Hoxha once shunned.

Democracy opened Albania to the world, but corruption and polarised politics have stunted development and slowed the country’s progress towards membership of the European Union. Albania remains one of Europe’s poorest countries.

Lulaj’s film contains archive footage of impoverished Albanians under Hoxha, the exodus triggered when communism fell and Albania’s borders flew open, and the anarchy and gang rule of 1997 when a pyramid savings scam collapsed and more than 2,000 people died in unrest.

It also recalls a 2008 explosion at a military base in which 26 people died, including a number of children, sparking an outcry over the failure of authorities to secure the munitions.

“The new generations, represented by (Filja’s) nephew, must fight to change the corrupt Albanian system,” Lulaj told Reuters. “With the kind of people who govern us, this country will never prosper.” DM

Photo: The word “NEVER” is seen painted on the slopes of Mount Shpirag in Berat, some 120 km (75 miles) southeast of the capital Tirana, July 5, 2012. It took Sheme Filja, 10 days and an army of villagers to paint the name “ENVER” on the side of Albania’s Mount Shpirag in 1968, in tribute to then communist dictator Enver Hoxha. Now, as part of a documentary project, Filja has swapped the first two letters with the help of his nephew and a whitewash pump, leaving the word “NEVER” to tower over Berat for the foreseeable future. Picture taken July 5, 2012. To match story ALBANIA-HOXHA REUTERS/Arben Celi