Whose war was it anyway? 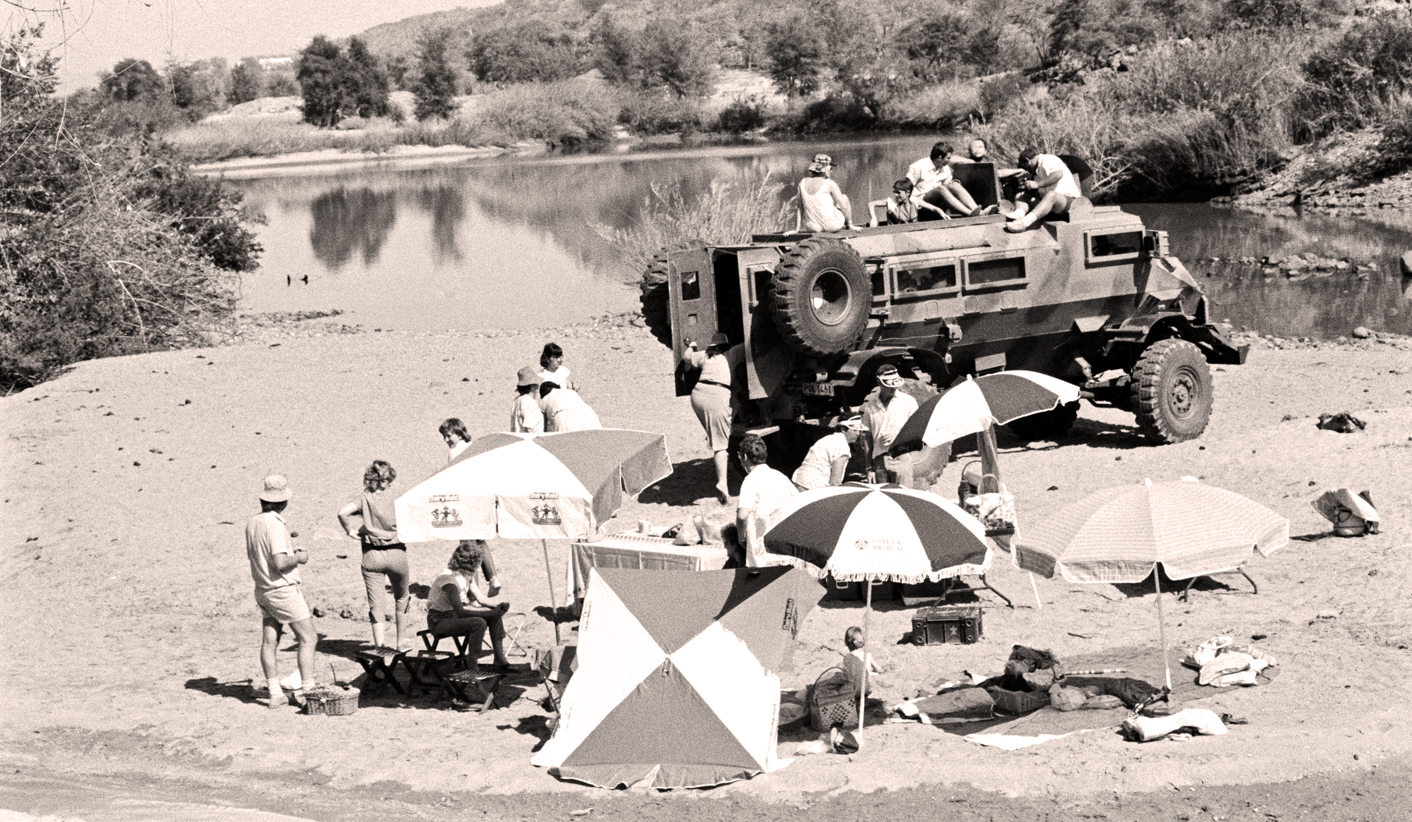 “Not My War”, an exhibition featuring art by prominent South African artists inspired by the Border War, is currently on display at Cape Town’s Michaelis Gallery. The picture that emerges is of a conflict which is still a source of angst, ambiguity and shame for many South Africans – even those who didn’t fight in it. By REBECCA DAVIS.

There are few wars in history which have attracted as many competing names as the armed conflict which took place in Namibia and Angola between the 1960s and 80s. “The Border War. The War of Liberation. The Bush War. The Angolan War. The War in the North. The very naming of this war denotes the conflict of ideologies inherent in its opposing forces,” writes Natasha Norman, who prepared the catalogue text for “Not My War”.

The fact that the “Border War” – as we’ll call it here for simplicity’s sake – is still a massively fraught topic for the generations of South African men who fought in it was clearly demonstrated last month when the Daily Maverick’s Mandy de Waal wrote the account of an incident in one soldier’s war – and received a flurry of furious responses from ex-servicemen disputing her right to comment on it at all.

Even more recently, a letter to the Weekend Argus on Saturday took issue with that newspaper’s representation, in a previous edition, of the battle at Cuito Cuanavale – one of the major skirmishes between Angolan, Cuban and South African forces towards the end of the war.

“I see that your newspaper resurrected the memory of the “victory” at Cuito Cuanavale. Can we not lay this myth to final rest?” wrote the author. “At the end of the day, all the wars in southern Africa were surrogate functions of the Cold War struggle for control of the Indian Ocean (which is not to say, of course, that some genuine principles were not involved). But the Cold War is far in the past now, many of the broader issues have been resolved, and we need to concentrate our minds on more important and in many ways more dangerous matters.”

Commentary like this is revealing of the way in which interpretations of the war’s function and narrative are still being contested, decades later. It is largely only within the past 10 years that memoirs from former conscripts have begun to be produced, challenging a silence on the topic which prevailed for some time among white ex-soldiers.

The reasons for this silence are complex but seem to owe something to the difficulty of carving out a truthful space on the topic in a post-Apartheid time. In a brilliant feature for the Sunday Independent last year, Mary Corrigall took a stab at explaining:

“Most of the conscripts were broken down and remodelled into unthinking killing machines. But the paradoxical position of the white conscript as a victim of a system that was designed to benefit those of his race made it difficult for border veterans’ stories to enter the public discourse because they contradicted the dominant nationalist narrative that the ANC had established, where those who fought on behalf of the apartheid state were the perpetrators, while those who battled against them undeniably occupied the position of victims. In other words, it had become politically incorrect for whites to articulate their ambivalent roles. And so it was that for almost a decade after democracy, the silence around the border wars remained undisturbed, unchallenged.”

The motivation behind the “Not My War” exhibition – timed to coincide with the 25th anniversary of Cuito Cuanavale – is described by Norman as the “desire to open up the history of the event rather than to close it in official readings”. Nonetheless, the title of the exhibition makes the particular political perspective which informs it quite clear: anyone hoping for bravado-filled war nostalgia will leave unsatisfied.

The exhibition was curated by David Brits, whose father served in the war, and the artists it features had varying levels of personal involvement in the conflict. Some were former conscripts – photographer John Liebenberg was conscripted to Namibia in 1976, where he describes himself as being “18 years old and full of shit”. Others, like Penny Siopis, had relatives or partners that served in the war. Yet others made visits to the former conflict areas years later in order to produce art on the subject.

Artist Gavin Younge did not participate in the war, but went to the site of Cuito Cuanavale in 1997 to make Forces Favourites, video footage filmed on the back of a bicycle that addresses the question: what happens to battle sites years after battle? The looping film shows the way in which the discarded artefacts of conflict have been re-appropriated for civilian life in the war’s aftermath: rusting, abandoned tanks have become normalised as the playground for children’s games. There is footage, too, of other lasting mementos: the wounds of landmine amputees.

Another work by Younge on display also deals with the issue of post-conflict environments, but from another angle. Bird Paintings focuses on an often-neglected issue: the destructive impact of war on eco-systems. The sequence of paintings, made on fragments of parquet flooring in a ruined home, captures birds that appear in an old bird book, The Birds of Angola, but which can no longer be found in the blighted area. While making the paintings, Norman notes, Younge “was interrupted periodically by villagers who would gesture excitedly at the images, saying the names of the missing birds in various local dialects”.

Other exhibits are more personal. Wayne Barker’s SADF Discharge Certificate (1985) amounts to just that: the certificate testifying to the artist’s release from the army by virtue of mental unfitness. Barker achieved his discharge – thereby bucking a trend which had seen three generations of men in his family serve in the military – by means of a form of pantomime-esque performance art: he marched like Charlie Chaplin for two weeks.

Photographer John Liebenberg worked for The Namibian after his military service, “informed by a radicalised political awareness”, and proceeded to capture images of the more informal, quotidian side of military service. His Picnic on the Cunene River (1987) is particularly striking: a photograph depicting permanent-force military families relaxing by the side of a river, chatting under beach umbrellas and, most incongruously, sprawling on an armoured Casspir in swimming costumes. Ordinary life goes on, it seems, even in the midst of brutal conflict.

Christo Doherty takes an image much like Liebenberg’s and has professional military model-makers recreate it, in Koevoet Picnic. There is a double-distancing effect: the Koevoet Picnic series are photographs of the model recreations of actual photographs, so the art itself may be seen as an attempt to mimic the desire of former conscripts to remove themselves from the events of war.

One photograph features a close-up of the other side of the Casspir, the side that Liebenberg’s original photo obscures. Here, Doherty has placed the bloodied body of a black war victim sprawling on the vehicle: an attempt to reveal an aspect of the war which the original image of domestic relaxation elides.

One of the most unexpectedly affecting features of the exhibition is Paul Emmanuel’s film A Rite Of Passage, 2008, which is a word-less record of new army recruits having their heads shaved at the 3rd South African Infantry Battalion in Kimberley. There is something extraordinarily brutal in the close-up images of head-shaving: a metaphor for the shearing of innocence. A black barber’s hands massage a white skull. The white T-shirts of army recruits flap in a field like a row of tombstones. It’s a film without any explicit commentary or critique, but an evocative meditation on the moment at which young men offer themselves up to the military.

“Not My War” may attract controversy from certain quarters for the perspective expressed by its title – there are undoubtedly some ex-SADF servicemen who are happy to express ownership of the war in a way the title does not allow. But the art it displays is as personal as it is political, and it reveals that Border War battles continue to be fought – in memory, imagination and interpretation – long after the dust has settled on Cuito Cuanavale. DM