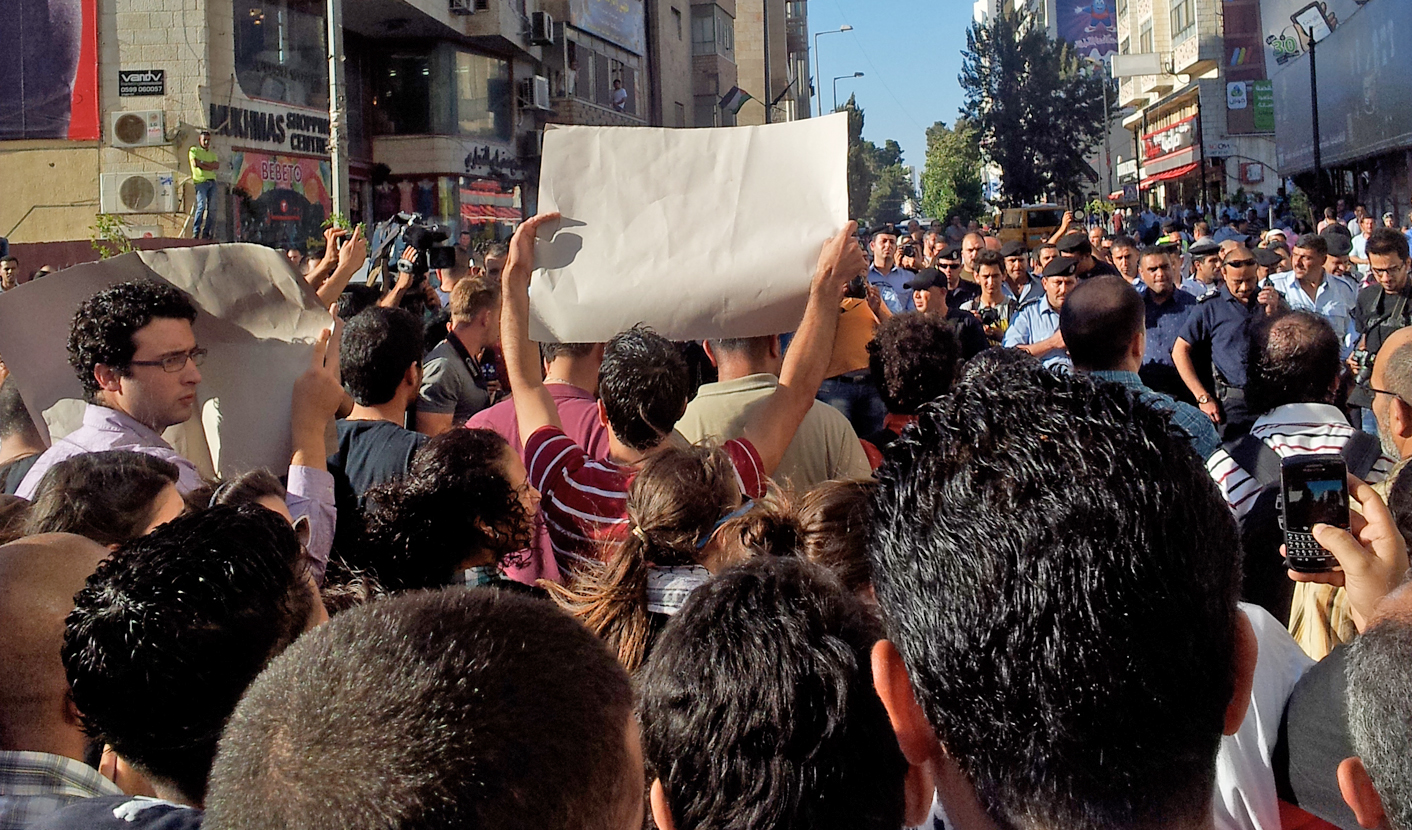 The Palestinian Authority, which exercises limited self-rule in the West Bank under interim peace deals with Israel, is on the verge of collapse. Facing imminent financial ruin and rising discontent in the streets, President Mahmoud Abbas and company will struggle to maintain the status quo in the West Bank. By KHADIJA PATEL.

Back when the “peace process” was an actual living effort towards peace, the Oslo Accords between the Palestine Liberation Organisation (PLO) and the government of Israel saw the creation of the Palestinian Authority (PA) or, as they later dubbed themselves, the Palestinian National Authority. Originally designated to be an interim body operating for just five years, the PA was accorded control over both security-related and civilian issues in Palestinian urban areas, and civilian control in Palestinian rural areas.

The plan was that during these five years, the final status negotiations between Israel and the PLO would work out exactly what the PA stood for, what it was and what it was set to become. But seventeen years later, none of that has been worked out. The PA continues to wield the control it won in Oslo, but pressures are rising from within the West Bank that could prove its undoing.

In conversation with Agence France-Presse last Sunday, Palestinian labour minister Ahmed Majdalani made no bones about the severity of the pressure against the PA. “It is the worst financial crisis experienced by the Palestinian Authority since its founding,” he said. “What is available to the Palestinian Authority at the moment in terms of funds is not enough to pay government employee salaries this month, with Ramadan approaching.”

For his part, Finance Minister Nabil Kassis called the crisis “the worst” in three years. He said on Tuesday that paychecks would be issued when the government could afford it.

The PA has frequently warned that it faces a massive financial shortfall that threatens its ability to pay thousands of government employees. A delay in salary payments would be particularly sensitive this month, as Ramadan begins on July 20, meaning many will be stocking up on food ahead of the fast-breaking Iftar meal. And in addition to salaries, the PA is also unable to pay off its many debts to private companies.

It is the PA’s “government spending” and its dependence on credit – now endemic to life in the West Bank – that may prove to be the economy’s undoing. The economic growth that triggered a great wave of conspicuous consumption in the West Bank in recent years has come to a grinding halt. “Life in the West Bank is difficult and expensive. Growth has slowed, unemployment is growing, prices continue to rise and more and more people are living on credit,” says Na’eem Jeenah, Director of the Afro-Middle East Centre.

A brief report by the International Monetary Fund (IMF) on the economic situation in the West Bank in May described the PA’s fiscal crisis as “very challenging” and said foreign aid to the PA was “far less than needed to finance the deficit” of around $1.3 billion in 2012.

Bank lending for personal consumption in the Palestinian territories has risen five-fold in the last two years to reach $417 million. According to figures from the Palestinian Monetary Authority, quoted by Reuters, total credit for cars alone accounts for a further $119 million. The PA accounts for almost a third of the $3.5 billion in credit given by banks, and with little donor money flowing in to prop up the economy, it’s unclear how much longer the PA can survive.

“The PA is on the verge of collapse because of the economic situation,” Omar Rahman, a Palestinian journalist, explains.  “The entire economic system is based on money coming from abroad. It is a donor economy, a fake economy. Nothing can save the economy now except more money from outside coming in.”

Halimeh blames Israel for aggravating the financial crisis by periodically withholding Palestinian tax revenue as political leverage, but tellingly reserves his sternest criticism for Arab donors. “Pledges to the PA have not been fulfilled, particularly from Arab countries,” he says.

The dearth of aid is blamed firstly on global economic conditions, but analysts point out that many donors were left bemused by Mahmoud Abbas’ excursion to New York last year. The grand plan to win the PA recognition as a state at the United Nations may actually have backfired.

Moreover, earlier this week it was revealed that a Palestinian request for a $1 billion loan from the IMF was turned down. According to the Israeli newspaper Haaretz, Palestinian Prime Minister Salam Fayyad and Bank of Israel chief Stanley Fischer, both former IMF officials, decided Israel would ask for the bridge loan because the PA is not a member state and cannot receive financial support from the IMF. Rahman is disbelieving of the PA’s move to approach the Israeli government to negotiate a loan from the IMF on its behalf. He describes the move as the occupied begging the occupier to help. “They are asking for further handcuffs. They are asking to be further tied to the occupation,” he says.

“The state of the economy shows the lack of vision and leadership in the PA,” Rahman adds. “It signals the inevitable collapse of the status quo.”

And the PA’s challenges don’t end with the economy. Last Saturday, a demonstration called by youth activists to protest against a planned meeting between Abbas and Israeli vice prime minister Shaul Mofaz, who they accused of “crimes” against the Palestinians, prevented protesters from approaching Abbas’s Ramallah headquarters – and clashes between security forces and protesters ensued. At least three activists were hospitalised, and security forces also attacked journalists covering the rally. At least seven people were arrested.

Even as Abbas promised an enquiry into the violence, reassuring Palestinians of their freedom to assemble and their right to protest, human rights group Amnesty International released a statement exhorting Abbas to make sure the enquiry was both independent and transparent. “The police violence our delegates witnessed in Ramallah is shocking and completely unacceptable. The committee formed to investigate the incidents must be given the resources and authority to conduct a credible, independent, prompt and effective investigation,” Ann Harrison, Amnesty’s Deputy Middle East and North Africa Programme Director, said in a statement this week.

The brutality with which Palestinian security forces cracked down on these protests was alarming, and apparently the interaction between protesters and security forces was also very personal. “The perception,” Jeenah says, “is that the PA is an arm of the Israeli Defence Forces. Palestinians are saying the PA does nothing for them – [that] all the PA does is serve the security objectives of Israel.” Crucially, he points out, “People have been chanting for an end to the Oslo accords, which of course signals the end of the PA.”

Rahman, however, believes that these calls to end the Oslo accords are not so much a call to dismantle the PA as a call to cease security co-operation with Israel. “The people getting out on the street may be small, but the sentiments expressed are not,” he says. “This is not a fringe opinion. It is widely felt, especially outside of the bubble that is Ramallah.”

The PA, then, appears to have reached the end of its initially stated course, and where it will go from here is unclear. “There is a lack of open, public debate on the future of the PA,” Rahman says, and Jeenah agrees. He believes that in order for Abbas and his allies from the Fatah party to continue enjoying the privileges inherent to being members of the PA, they must open themselves to public opinion.

“In reality, for Fatah and the PA to redeem themselves, it would be best to hold a referendum on whether the PA should continue,” Jeenah says. And if indeed the PA does survive its economic woes to face the full thrust of public opinion, they may find that their time is up. “People are saying that Abbas and his friends have had their time, but now they need to stand aside and allow the people to resist the occupation.”

However, in telling of the disconnect between the PA and ordinary Palestinians, Halimeh believes the Palestinian people will not be put off by worsening economic conditions. “Our people are prepared to starve and die. It will not deter us from our struggle,” he says.

But even as he acknowledges ordinary Palestinians will be affected by the economic crisis most acutely, he appears aloof – betraying no discontent with the architects of this crisis. DM

Photo: Scenes from the protests against the Palestinian Authority in Ramallah in the last week. (Ahmed Nimer)