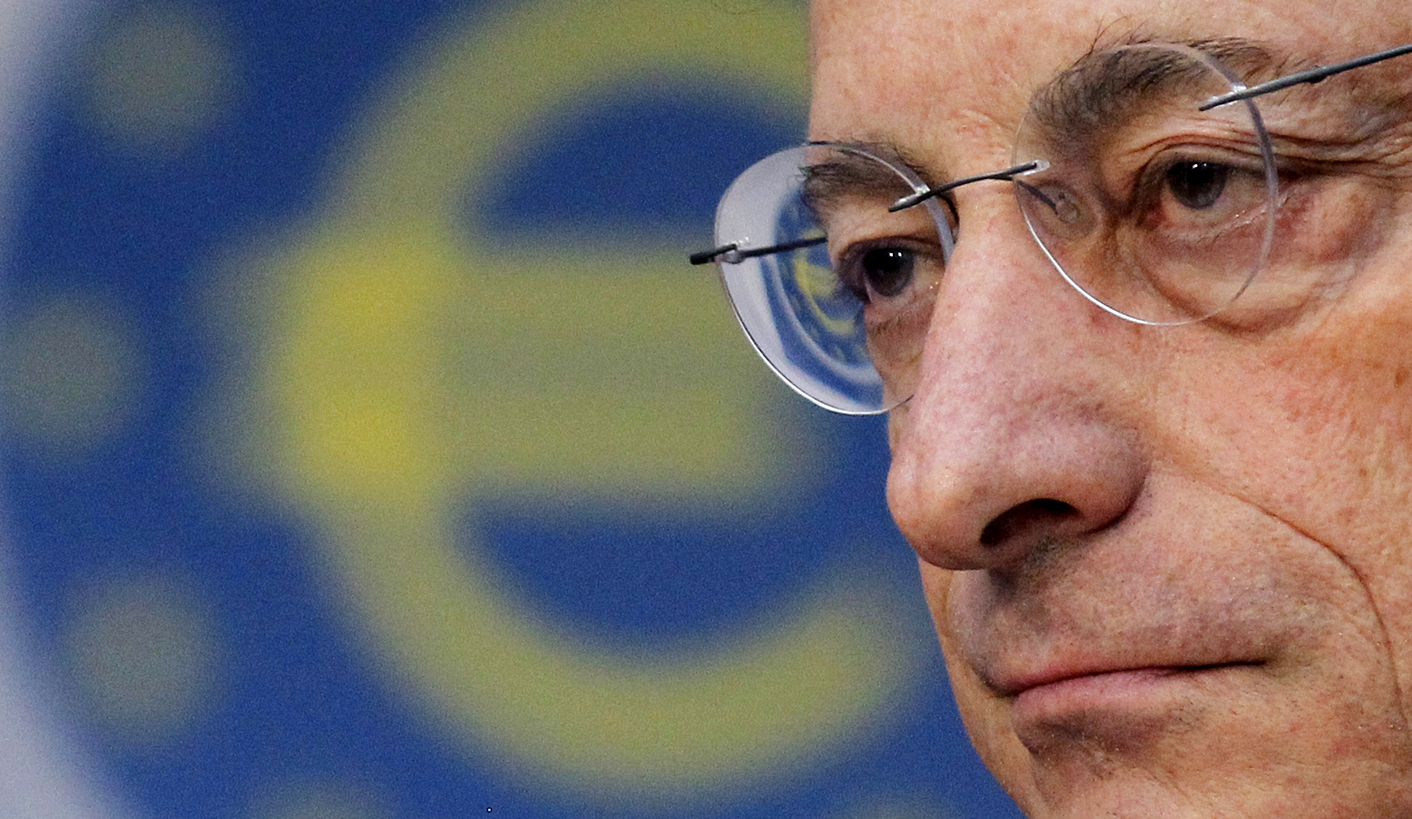 The European Central Bank cut interest rates to a record low on Thursday to breathe life into a deteriorating euro zone economy but steered clear of more dramatic measures such as buying government bonds or flooding banks with fresh liquidity. By Sakari Suoninen.

The quarter-point cut in the ECB’s main refinancing rate to 0.75 percent was in line with market expectations and followed a dire batch of economic data that show even euro zone powerhouse Germany is entering a modest downturn.

European shares extended gains on the news and the euro fell. Of 71 economists polled by Reuters, 48 had expected the bank to cut, most of them by 25 basis points, though some others forecast a larger decrease.

But stock gains were relinquished after ECB President Mario Draghi said the euro zone economy would recover only gradually, threatened by the debt problems of several of the bloc’s members and banks’ unwillingness to lend.

“The risks surrounding the economic outlook for the euro area continue to be on the downside,” Draghi told a news conference. “Beyond the short term, we expect the euro area economy to recover gradually, although with momentum dampened by a number of factors. In particular, tensions in some euro area sovereign debt markets and their impact on credit conditions.”

The ECB’s loosening of policy followed shortly after China and Britain did similar.

Draghi said there was no coordination between the three.

In addition to cutting the main refinancing rate, the ECB also reduced its deposit rate, which acts as a floor for the money market, to zero from 0.25 percent.

This move could encourage banks to lend to each other rather than simply parking funds of up to 800 billion euros back at the ECB every night, for which they will now get no return.

It will also be welcomed by the southern European banks that have tapped the ECB heavily for loans. A 25-basis-point cut would decrease annual interest payments from the 1 trillion euros in 3-year loans by about 2.5 billion euros.

The interest rate cut is not seen as a panacea for the euro zone’s problems, which stem from a loss of confidence in state and bank finances, but the reduction in borrowing costs shows the ECB is ready to support the flagging economy.

Draghi said the decision was unanimous. “This carries a special strength,” he said.

The central bank had faced pressure from investors and the International Monetary Fund to take bolder measures, with IMF Managing Director Christine Lagarde urging the bank to resume its purchases of government bonds.

The ECB did not heed that advice. A core of its policymakers feel the bank’s bond buying programme — dormant for four months now — amounts to monetary financing of governments, which is beyond the bank’s mandate.

Draghi also gave no strong signal that the ECB was poised to offer a repeat of the twin 3-year ultra-cheap loans, or LTROs, with which it funnelled over 1 trillion euros to banks in December and February.

But neither did he rule it out.

“We always said that our non-standard measures are temporary, and we don’t want to pre-commit about future decisions,” Draghi said. “But certainly now a few months have passed (since the first LTROs), and we see that credit flows are actually weak and remain weak.”

While the ECB is not ready to announce that the bond programme is officially over, it has become clear that the purchases would be restarted only in an absolute emergency.

While inflation remains above the ECB’s target of just below 2 percent, it has been sliding recently and ECB staff expect it to average 1.6 percent next year, giving room for a rate cut.

Business surveys released on Wednesday strengthened the case for a cut, showing the euro zone’s private sector downturn eased only slightly in June and that it remains in recessionary territory.

“We continue to believe that the ECB is reluctant to restart its sovereign debt purchases,” said Ken Wattret, economist at BNP Paribas. “Another extra long-maturity LTRO is a more palatable option. However, how much appetite there is even for that is unclear, as the high use of the deposit facility suggests that there is no aggregate shortage of liquidity in the euro zone.” DM