You want to Supersize it? 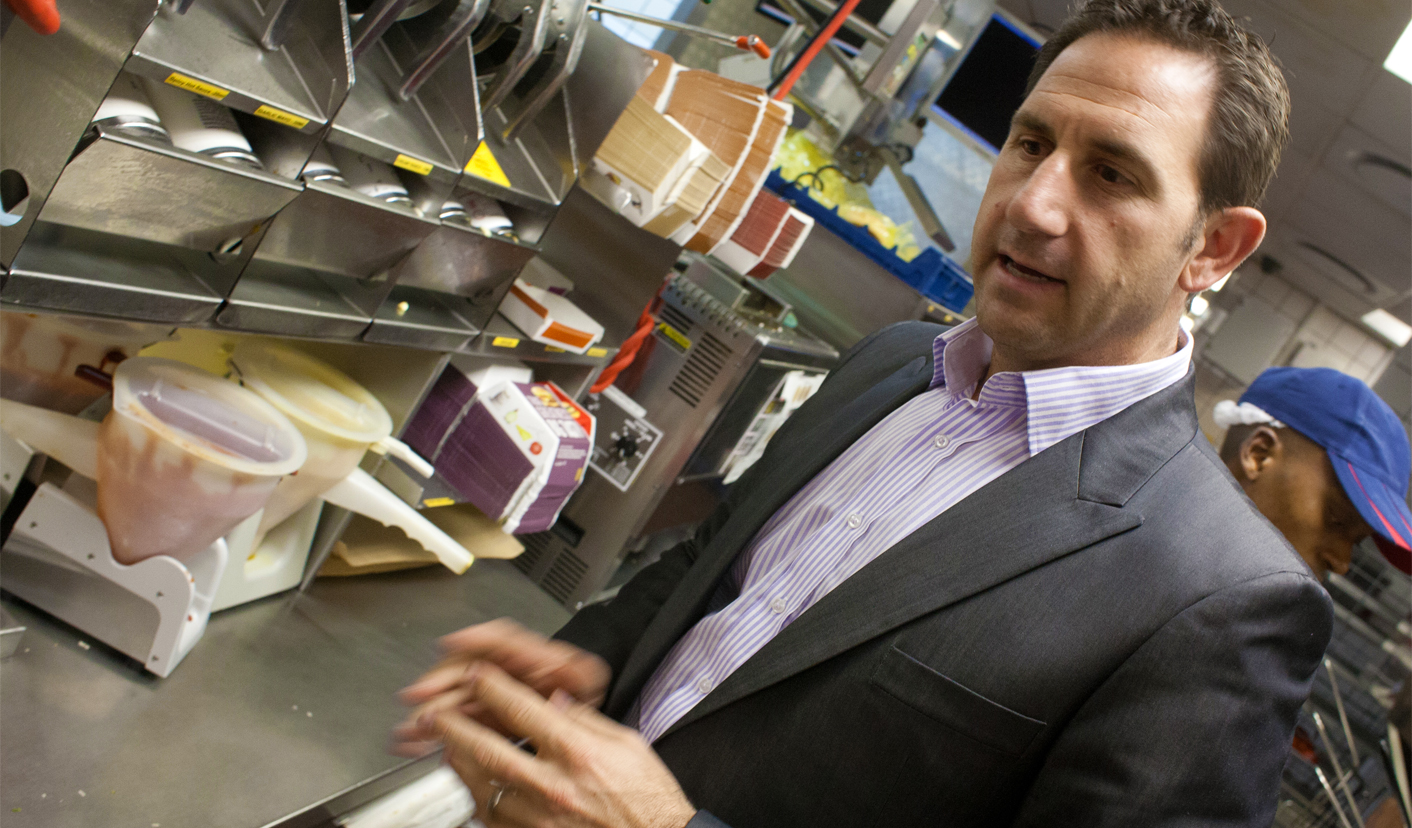 Compared to its worldwide expansion, McDonald’s has had a slow start in South Africa. But under the ownership of Cyril Ramaphosa, it wants to double in the next four years. GREG NICOLSON took a spin through one of its outlets.

Greg Solomon orders a strawberry juice before our interview in the Woodmead McDonald’s. I admit it’s the first time I’ve seen strawberries under the golden arches.

“You didn’t know? Wow! You don’t eat here enough.” He probably just likes the juice, but the routine seems rehearsed, an advertisement for the fast-food chain’s healthy eating menu.

If you like its salads, or burgers that reportedly never decompose, then you’re in luck. Since Cyril Ramaphosa took over McDonald’s SA last year, the company has been expanding to increase its share of the fast-food retail market.

It wants to double its South African business in the next four years. Currently, it has over 6,000 employees and 165 restaurants across the country. Ramaphosa wants to double those figures, along with revenue.

Even with the expansion, McDonald’s will still be smaller than its American counterpart, KFC. The latter came to the country in 1971, whereas McDonald’s only opened in 1995. KFC holds about 40% of the fast-food market compared to the 5% secured by McDonald’s.

“Is success more restaurants?” asks Solomon, enjoying his strawberry juice. “For us, clearly no. We’ve never wanted to be the biggest. We want to be the best and I can positively boast that I sit now in front of you in some quite trying times, that we have 165 restaurants that serve 6.7-million customers every month and that each independent unit is highly profitable.”

Solomon comes across as a capable manager. He must be, since he’s entrusted with part of Ramaphosa’s fortune. But his speech has an air of performance, delivered like a businessman tentatively using the media.

A public relations consultant listens in as he explains his philosophy of management. He grounds himself in the “three Es” – education, experience and exposure, he says.

An engineer by training, he is happy with structures. Think of a person in your life, he tells me. On a scale of one to 10 – 10 being outstanding – rank how much you trust that person. Then, out of 10, rank your respect for him or her. Multiply the answers and you know how much influence the person has on you.

“As a manager, can you imagine if you had a whole bunch of people with nine and nine in your life – how powerful you’d be as a manager?”

Solomon walks behind the counter and explains the restaurant’s processes. He points at the buttons, timers and computer screens like a pilot showing a child through the cockpit.

Before he became managing director of McDonald’s SA, the executive, who’s been with the company for 15 years, learned the operational side of the business by working in a restaurant for a year, he says.

“What this has allowed is for me to build a very strong base.”

But the leadership lessons, PR adviser, interview in the restaurant and measured cadence make Solomon, with the body of a businessman who appears to work out and might have been an athlete, seem like he’s in costume.

As things are, he must feel the pressure. Though Ramaphosa has set ambitious targets to expand, health minister Aaron Motsoaledi has declared a war on lifestyle diseases and the trans (unsaturated) fats contained in fast food.

“Human beings love trans fats because they are convenient. Ask the Americans. The food industry also loves them as they bring in more money. But our bodies will never love them – until the end of time.

“Our fear is that when America pushes something out, it comes to Africa. When they pushed out skin-lightening creams, they came to Africa. We must save ourselves or we will die in large numbers,” said Motsoaledi, speaking to journalists in February.

Along with the tobacco and alcohol markets, the health minister wants to regulate the food industry. “We are not going to have many friends in this country, unfortunately.”

If Motsoaledi has American fast food retailers in his sights, there’s no better target than McDonald’s, which Solomon says will stick to what it does best, the good old-fashioned hamburger.

But while the golden arches are coming to a street corner near you, South Africa is “eating itself slowly to death”, according to a 2010 study.

McDonald’s will focus on establishing restaurants in urban areas, where, coincidentally, the highest number of overweight people live. Cape Town, Pretoria, Johannesburg and Durban are the worst affected by obesity.

“We’re shooting for double the number of restaurants because of our people matrixes, our customer matrixes and where we are with our franchisees. We now have the maturity and the respect to be able to get there. It happens to be double, it might even be triple.”

Good news if you’re after a salad and strawberry juice, probably better if you want to be Supersized. DM