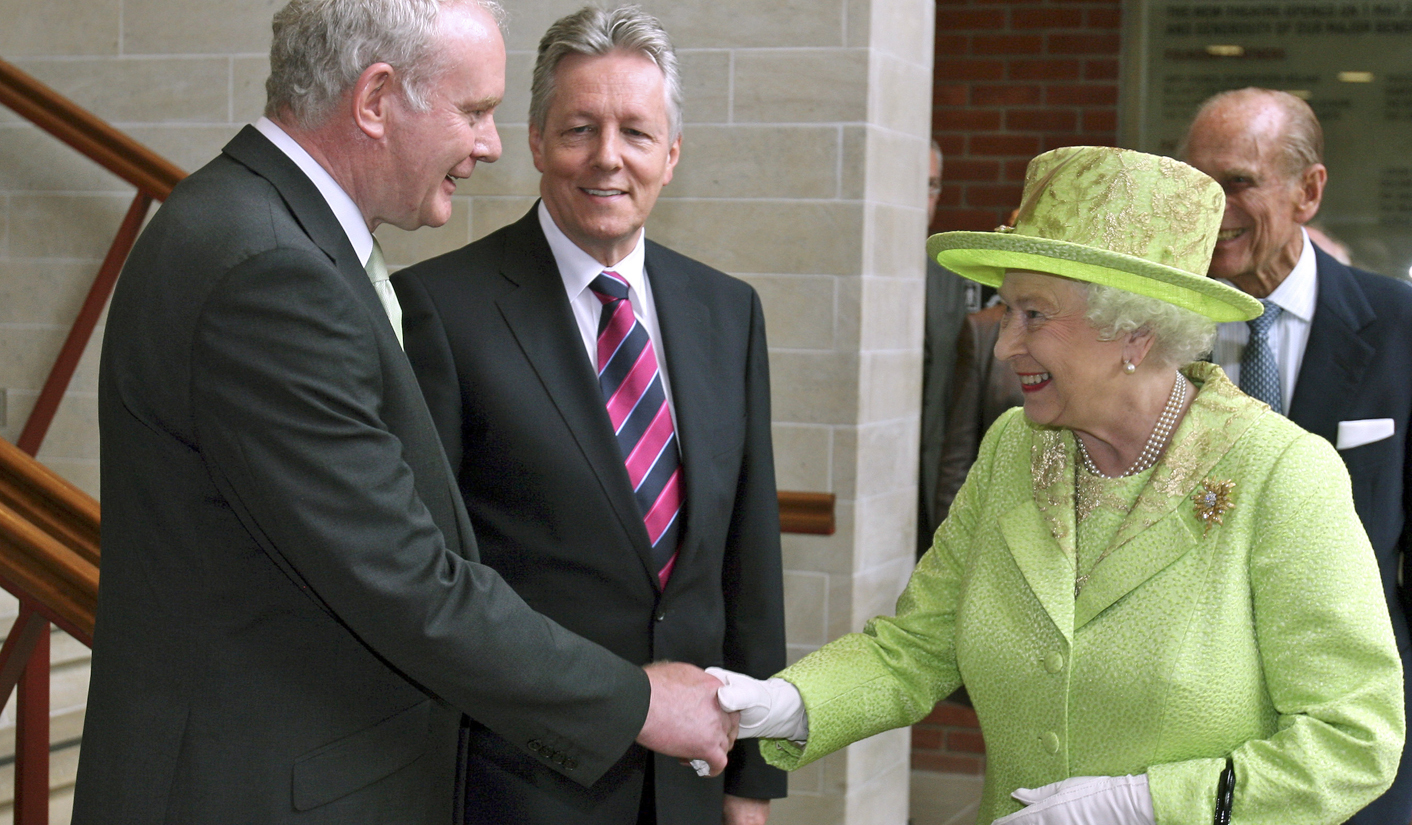 Britain's Queen Elizabeth shook the hand of former IRA guerrilla commander Martin McGuinness for the first time on Wednesday, drawing a line under a conflict that cost the lives of thousands of soldiers and civilians, including that of her cousin. By Conor Humphries and Ivan Little

Britain’s Queen Elizabeth shook the hand of former IRA guerrilla commander Martin McGuinness for the first time on Wednesday, drawing a line under a conflict that cost the lives of thousands of soldiers and civilians, including that of her cousin.

The meeting with McGuinness, who is now the deputy first minister of Northern Ireland, comes 14 years after the Irish Republican Army ended its war against British rule in the province, and is one of the last big milestones in a peace process whose success has been studied around the world.

The queen met McGuinness, Northern Ireland’s Unionist first minister Peter Robinson and Irish President Michael D.Higgins for just under 10 minutes behind closed doors in a theatre in a leafy suburb of Belfast cordoned off by hundreds of police.

McGuinness shook the gloved hand of the queen a second time as she left the theatre, this time in front of television cameras, but unlike other guests chose not to bow his head.

The queen’s bright green outfit appeared to have been chosen with Ireland’s national colour in mind, and McGuinness wished a smiling monarch well in Irish, saying “Slan agus beannacht”, which he told her means “Goodbye and God speed”.

There has been scattered opposition to the gesture of reconciliation from dissident Irish militants and from some of the IRA’s victims. But the vast majority of the province’s politicians backed the meeting, the first between the queen and a top member of the IRA or its former political wing, Sinn Fein.

“Today is a huge event and it is, in a sense, the ultimate handshake,” John Reid, British Secretary of State for Northern Ireland from 2001 to 2002, told the BBC.

“On all sorts of levels this is a hugely significant step but it is only one more step in a long process. This may take generations – to get back to absolute reconciliation in Northern Ireland and the island of Ireland.”

Ireland’s president said the handshake was “something that had to be done” to remove an obstacle to reconciliation. Sinn Fein president Gerry Adams said the gesture was symbolic but added that “the journey isn’t near completion”.

A few hours later, the queen waved to crowds from an open-topped car at a celebration of her Diamond Jubilee attended by over 20,000 people – a stark contrast to the armoured limousines that have been a mandatory precaution on previous visits.

The queen regularly meets senior Unionist politicians, Protestants who want Northern Ireland to stay inside the United Kingdom, but not Sinn Fein – the largest party representing Catholic nationalists who want a united Ireland.

McGuinness is a hero to Republican hardliners, but has long been a hate figure to Unionists, many of whom harbour deep suspicions about his past.

He admits he was on the front line in the war with British forces, including on Bloody Sunday in 1972, when troops shot dead 13 unarmed protesters, but says he never killed anyone.

A British report said that McGuinness probably was armed with a submachinegun on Bloody Sunday, but did nothing to provoke the massacre. He has said he left the IRA in 1974, but most historians believe he was active for most of its campaign.

For the queen and her consort Prince Philip, who shook McGuinness’s hand more cursorily, the conflict had a personal edge.

The queen’s cousin Lord Louis Mountbatten, who was also Philip’s uncle, was killed by the IRA in 1979 with three others, including his 14-year-old grandson, when his boat was blown up while he was on holiday in Ireland.

More than 1,000 members of the British security forces were among 3,600 people killed during the 30 years of the “Troubles”.

McGuinness told the queen that he agreed with comments she made last year that all victims of the conflict should be remembered, according to a source who was at the meeting.

McGuinness said on Tuesday that, while he represented people who had been badly hurt by British state violence, he was also big enough to understand that the queen and other families in Britain had also lost loved ones.

Asked by reporters after the meeting if his convictions had changed, he said he was “still a Republican”.

Sinn Fein, which has become increasingly popular south of the Irish border as the main party opposing an EU/IMF bailout, is keen to bolster its image as a mainstream party and distance itself from a violent past that alienates many southern voters.

It still wants a referendum on whether Northern Ireland should remain part of Britain, but in the short term its aim is to be in government in the north and south simultaneously.

Only last year, Sinn Fein rejected invitations to attend events during the queen’s landmark visit to the Irish capital Dublin, the first by a British monarch since the republic won independence from Britain in 1921.

Some Republicans branded McGuinness a traitor for meeting a queen who is also commander-in-chief of Britain’s armed forces.

“People are not unhappy that someone is shaking her hand, just not him. He’s a hypocrite,” said Martin, a 42-year-old unemployed man who said he and his friends had got criminal records defending their neighbourhood in working-class Belfast.

“He sent people out to fight. To die. And now he’s putting on a suit and shaking her hand? I don’t want war (but) this shouldn’t have happened till the next generation.”

With splinter groups continuing to attack British targets, security forces say the risk of an attack is at its highest level since the Good Friday peace agreement was signed in 1998.

Nine police suffered minor injuries on Tuesday night when they were pelted with petrol bombs and other missiles. DM

Photo: Britain’s Queen Elizabeth shakes hands with Northern Ireland deputy first minister Martin McGuinness, watched by first minister Peter Robinson (C) at the Lyric Theatre in Belfast June 27, 2012. Queen Elizabeth shook the hand of former Irish Republican Army (IRA) commander McGuinness for the first time on Wednesday, drawing a line under a conflict that cost the lives of thousands of soldiers and civilians, including that of her cousin. REUTERS/Paul Faith