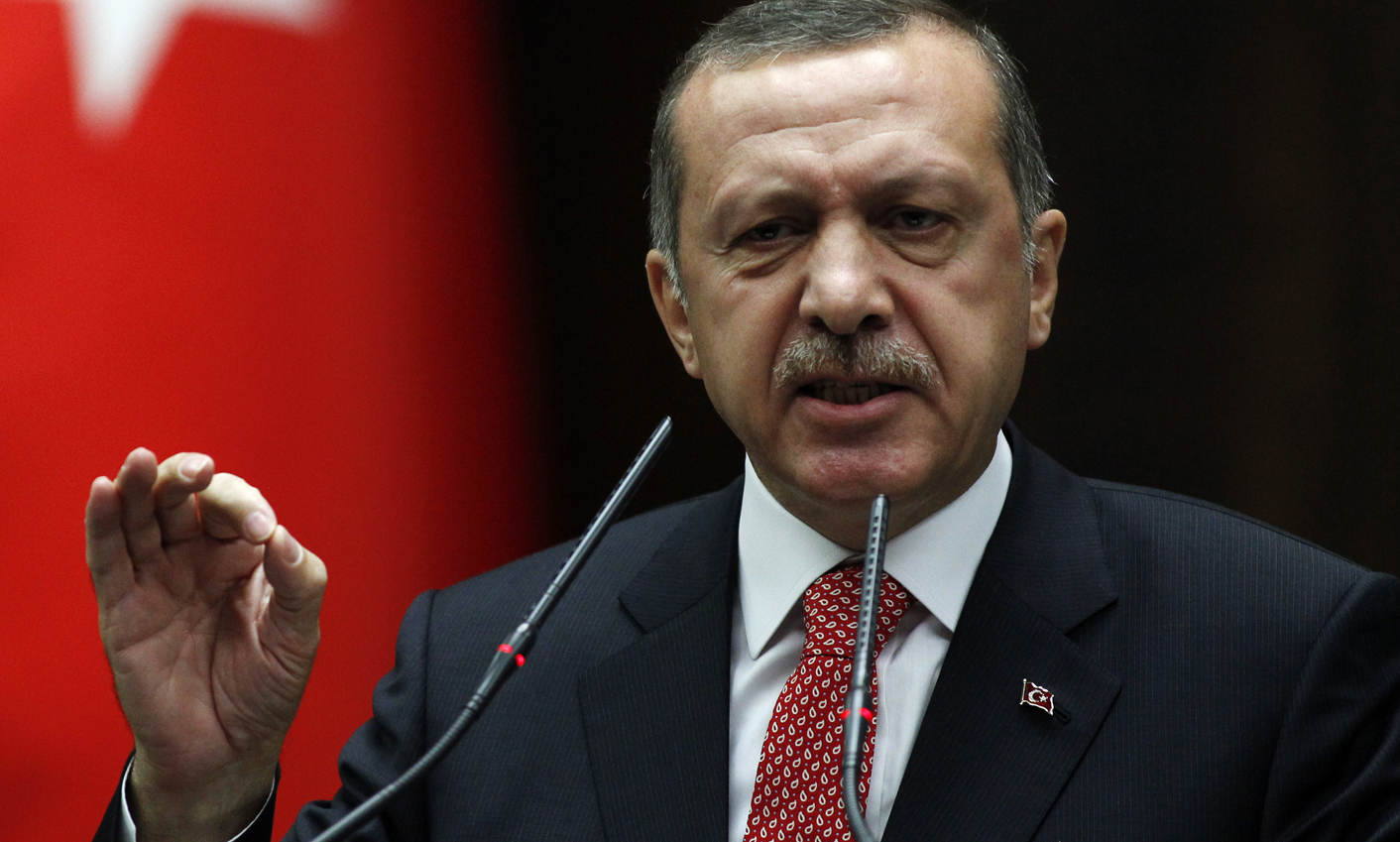 Prime Minister Tayyip Erdogan told Syria to beware the wrath of Turkey after Friday's shooting down of a warplane and said he had given orders to the armed forces to react to any threat approaching Turkish borders from Syria. By Oliver Holmes and Jon Hemming

Erdogan’s warning to Syria reflected increased tensions not only on the Mediterranean coast, where the aircraft was shot down, but on a long common land border criss-crossed by rebels fighting President Bashar al-Assad. Syria said on Sunday it had killed several “terrorists” infiltrating from Turkey.

In Syria itself, Damascus suburbs were gripped by the worst fighting the capital has seen since the uprising against Assad began 16 months ago. The city had long been seen as a bastion of support for the president.

Prime Minister Erdogan, who fell out bitterly with Assad after he dismissed his advice to allow democratic reform, said Turkey was no warmonger.

“Our rational response should not be perceived as weakness, our mild manners do not mean we are a tame lamb,” he told a meeting of his parliamentary party. “Everybody should know that Turkey’s wrath is just as strong and devastating as its friendship is valuable.”

NATO member states, summoned by Turkey to an urgent meeting in Brussels, condemned Syria over the incident that has resulted in the loss of two airmen. The cautious wording of a statement demonstrated the fear of Western powers as well as Turkey that armed intervention in Syria could stir a sectarian conflict, already simmering in Syria, across the region.

“Those who want war may be disappointed by the prime minister’s speech,” veteran Turkish journalist Mehmet Ali Birand wrote on Twitter.

“But a big part of society breathed a sigh of relief.”

Erdogan said armed forces’ rules of engagement had been changed as a result of the attack which Turkey says took place without warning in international air space.

“Every military element approaching Turkey from the Syrian border and representing a security risk and danger will be assessed as a military threat and will be treated as a military target,” he said.

Turkey hosts the rebel Free Syrian Army (FSA) on its soil, across the border from Syria, and accommodates over 30,000 refugees – a number Erdogan fears could rise sharply as fighting spreads. Rebel soldiers move regularly across the border and defectors muster on Turkish soil.

Fighting has often moved very close to the frontier and could under the new rules of engagement draw Turkish military reaction, especially if Syrian forces pursue rebels.

Clashes between rebels and pro-Assad forces are now occurring daily across Syria. Violence gripped the suburbs of Damascus on Tuesday, activists said.

Video published by activists recorded heavy gunfire and explosions. Blood pooled on a sidewalk in the suburb of Qudsiya and a thick blood trail led into a building where one casualty had been dragged. A naked man writhed, his body pierced by shrapnel.

“The clashes led to the killing of tens of terrorists, wounding a large number of them, arresting others and seizing their weapons which included RPG launchers, sniper rifles, machineguns and a huge amount of ammunition,” the agency said.

The private Turkish Dogan news agency said a convoy of tanks loaded on transporters and armoured vehicles headed from the southeastern city of Mardin on Tuesday towards the town of Nusaybin on Syria’s northeastern border. It did not say how many tanks and armoured vehicles were in the convoy, but there are frequent movements of troops and armour in the region where Turkish troops are fighting Kurdish separatist rebels.

The Turkish general staff denied reports its forces had been placed on high alert and all leave cancelled. A customs minister said none of Turkey’s borders with Syria would be closed.

Erdogan said Syrian military helicopters had violated Turkish airspace on many occasions without Turkey reacting. He saw Friday’s attack as a deliberate blow against Turkey.

“Our plane was targeted on purpose, and in a hostile way, and not as a result of a mistake. The attitude of the Syrian officials following the incident is the most concrete evidence that our jet was attacked on purpose.”

“The harassing fire on our Casa type plane during the search and rescue operations is the most palpable evidence of this intent.”

According to Turkey, the Phantom jet was testing Turkish air defences near the countries’ common maritime border when it was shot down. Some analysts say it might also have been probing Syria’s Russian-supplied radar and air defences that would be an obstacle to any form of Western military involvement in Syria.

Russia, which has opposed Western calls for the removal of Assad, maintains close relations with Damascus and keeps a naval base close to the spot where the Turkish jet was shot down.

Moscow-based defence think-tank CAST said Russia was expected to deliver nearly half a billion dollars worth of air defence systems, repaired helicopters and fighter jets to Syria this year despite international pressure to halt arms sales to Damascus.

Friday’s incident is unlikely to increase Turkey’s appetite for an intervention it fears would have unpredictable consequences for Turkey and for a region riven by sectarian division. But it has in the past spoken of the possibility of creating humanitarian corridors inside Syria.

“For Turkey there are two bad scenarios: one, a mass influx of refugees and two, large-scale massacres in Syria,” a Turkish official said.

“Ankara has not taken a decision for military intervention or a humanitarian corridor at the moment. But if these are needed, everybody would prefer that they will be done with international legitimacy. However, if things go really badly we have to be ready for any kind of eventuality,” he added.

“Turkey has said that if 50,000 Syrian refugees come, then it becomes a very dangerous situation here. We could soon see those numbers,” Alpay said.

“Foreign policy cannot be conducted through bluffing or bravado,” he said. “Nobody can play poker with Turkey’s national interests.

“Whatever the prime minister said at the time of the Mavi Marmara incident, he said the same thing today. If you bluff, you lose your deterrence internationally,” he said.

Erdogan demanded an apology from Israel after Israeli commandos stormed a Gaza-bound Turkish ship in 2010 killing nine pro-Palestinian activists. No apology has been forthcoming and Turkey’s once close ties to Israel have remained cool.  DM

Photo: Turkey’s Prime Minister Tayyip Erdogan addresses members of parliament from his ruling AK Party (AKP) during a meeting at the Turkish parliament in Ankara June 26, 2012. The Turkish Armed Forces’ rules of engagement have changed as a result of Syria shooting down a Turkish warplane and they will respond to any violation on the Syrian border, Erdogan said on Tuesday. Turkey would not engage in war-mongering, but the attack on the reconnaissance jet, which was deliberately targeted, would not be left unanswered, he said in a speech to his ruling AK Party deputies in parliament. REUTERS/Umit Bektas