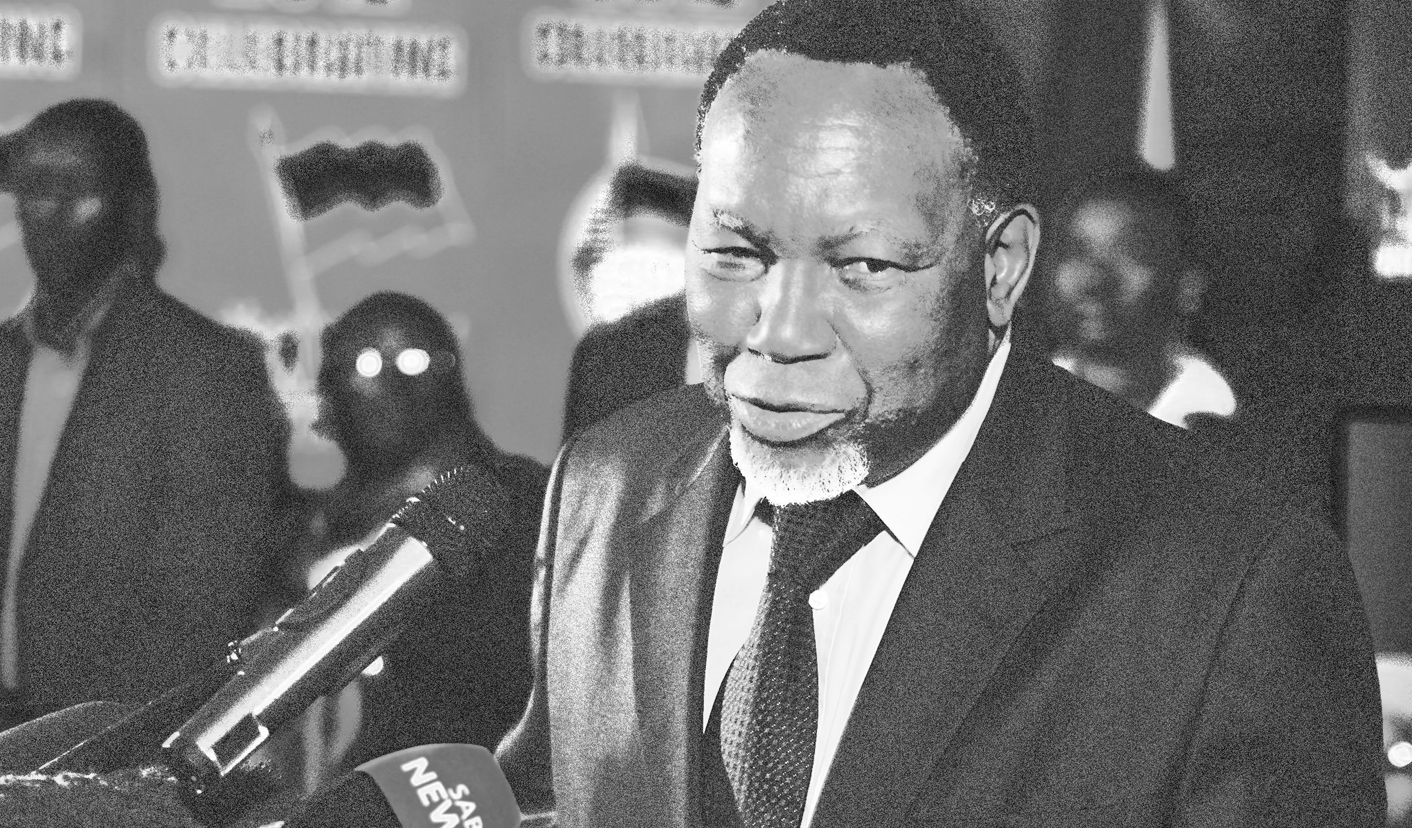 Deputy president Kgalema Motlanthe appears to be unnerving President Jacob Zuma by simply standing still. It’s downhill towards the ANC’s elective conference in Mangaung in December, but Motlanthe has not said or done anything to categorically indicate that he wants Zuma’s job. Yet, ahead of the ANC policy conference starting today, where the leadership battle will be the great stomping neon elephant in the room, Zuma has shown that he is very much spooked. By RANJENI MUNUSAMY.

Before he became active in politics, deputy president Kgalema Motlanthe apparently considered becoming a priest in the Anglican Church. He certainly has the demeanour and gentle temperament of a priest, even when expressing disapproval about something or someone.

His perceived “attack” on the ANC’s “Second Transition” document, which forms the centrepiece to all the policy issues up for debate this week, is anything but that – considering the fiery exchanges between ANC leaders that have signposted the road to Mangaung.

“Now we are preparing for a policy conference (but)  if you pick up ANC policy discussion documents now and read them, the language, the vocabulary in certain instances does not convey what the ANC wants to convey because it is language which is inherited.

“For example, this second transition – from what or from where to where? What constituted the first transition? What were the tasks of that phase? Have all of those tasks been accomplished or not? But the language used is of that nature, a smattering of Marxist jargon,” Motlanthe said at a recent address in honour of the Harold Wolpe Trust.

Despite this refreshingly honest admission by a senior ANC leader, Zuma reacted as if Motlanthe had attacked him personally.

Speaking the day after Motlanthe made the comments, Zuma veered off his prepared speech to mock critics of the Second Transition as being similar to opposition politicians.

“They will never agree with us because we don’t come from the same place, from the same town, from the same street. In fact, if they were not worried, we should be worried that we are doing something wrong,” Zuma said.

Then, speaking in the Free State on Sunday, Zuma again questioned the motives behind Motlanthe’s criticism.

“The ANC produces documents first and they are discussed by working committees. Once they (the documents) are looked at by the national executive committee (NEC), they are sent to branches.

“This is what we did. Comrades at leadership level had the opportunity to see them and the time to look at it, not once but three times. The NEC discussed it three times. It is inconceivable for a member of the NEC to say he is not aware of it,” Zuma said.

Zuma is evidently worried that Motlanthe could pose a formidable challenge to him in December and wants to beat him and his supporters into submission. Whereas the ANC Youth League has long ago stated its intention to nominate Motlanthe for the presidency, and nameless “aides” told some newspapers in March that he would attempt to unseat Zuma, the deputy president has been diplomatic and coy about his future.

In a rare one-on-one interview on SABC’s Interface on Sunday night, Motlanthe neatly navigated a range of contentious questions about the succession battle and the build-up to Mangaung, batting away suggestions that he was gearing for a faceoff against Zuma.

He said he had “no illusion whatsoever” about contesting the presidency and that speculation in this regard was “baseless” and “not helpful”. He bemoaned the premature commencement of the succession debate in the public domain: “Our names are being thrown into this pot,” he said.

Motlanthe distanced himself from the nomination of the Youth League, saying it “didn’t count”. Only when the nominations process opened in October could branches formally make nominations, he said. The ANC’s electoral committee would then collate the nominations and ask the candidates if they were prepared to stand.

“I will respond to the question once it is posed by the electoral committee,” he said.

With regard to the Second Transition document, which had caused him and Zuma to cross swords, Motlanthe said it was not yet a policy of the ANC and was meant to generate debate.

He said he was worried by the language the ANC employs as it should not “be subject to a multiplicity of interpretation”. “The essence should be understood,” Motlanthe said, maintaining there should be more clarity in the messages put out by the ANC.

It would be difficult for anyone to maintain the argument that Motlanthe is campaigning against Zuma after this. It was a brilliant manoeuvre by Motlanthe to clear the air and to head into the policy conference smelling of roses while Zuma will be on the defensive. When they stand on stage side by side today, it will be Zuma and his leadership which will be under scrutiny. The heat is completely off Motlanthe.

It is difficult to find two people more dissimilar in the ANC than Zuma and his deputy. Zuma is gregarious, enjoys being the centre of attention, is a showman with his song and dance, laughs uproariously and of course has a colourful lifestyle on full public display. Motlanthe tries to blend into the crowd, is unassuming and soft-spoken, chooses his words carefully and goes out of his way to keep his personal life private.

In his book Eight Days in September, former presidency director-general Frank Chikane gives an account of the tense days after Thabo Mbeki’s recall as president and the installation of Motlanthe as stand-in president for the seven months until the 2009 elections. With regard to Motlanthe’s swearing-in ceremony, Chikane says:

“I also had to find out whether members of his family would attend so that we could make the necessary arrangements to take care of them and whether he wished to invite any guests. The answer to both questions was no.”

Chikane also describes the malicious attacks on Motlanthe from within the ANC and the alliance during his short term as president, both against his political decisions and on his personal life.

“My respect for Motlanthe grew as I observed that he refused to allow himself to be distracted by the vicious and personalised attacks against him. He held his head high and focused on the tasks at hand to ensure stability in government, continuity, improved service delivery and an orderly transition through to the coming election.”

When the time came for Motlanthe to hand over the reins to Zuma, Chikane says:

“One other unique thing that happened during the transition from one president to another is the fact that a president who was in power for seven months was ready peacefully to hand over power to another and then become his deputy president. President Motlanthe knew as he was sworn in as president in September 2008 that he was going to be a caretaker president until the elections in April the following year. He also recognised the seniority of the president of the ruling party, as he was his deputy.”

“This may look ordinary but it is almost unheard of that a president of a country accepts so easily a change of roles, where he or she becomes the deputy to the new president.”

It is perhaps the security of receiving a presidential salary for the rest of his life that keeps Motlanthe unfazed by whatever happens in the succession battle. Or perhaps he wishes to marry his fiancé, Gugu Mtshali, and stay out of the line of fire from now on. Whatever the reason, Motlanthe appears unflappable and collected while everyone else in his party is immersed in scrappy factional battles.

As a result, he has not made a single misstep so far that can be used against him.

“If a leadership engages in horse racing and doodling and so on and doesn’t analyse a situation, that leadership will get somewhere but it may not be in the right direction,” he said during the Harold Wolpe lecture.

Ahead of the ANC’s Polokwane conference, Motlanthe, then the party’s secretary- general, was in favour of both the Zuma and Mbeki camps. Until the conference started, people in the Mbeki camp were still considering him for a position on their slate. He played his cards at the last minute and the gamble paid off for him. It appears he is employing a similar strategy now and wants to reveal his hand as close to the conference as possible.

It’s no wonder, then, that Zuma is rattled. DM