The Endgame: Assange running low on support – and options 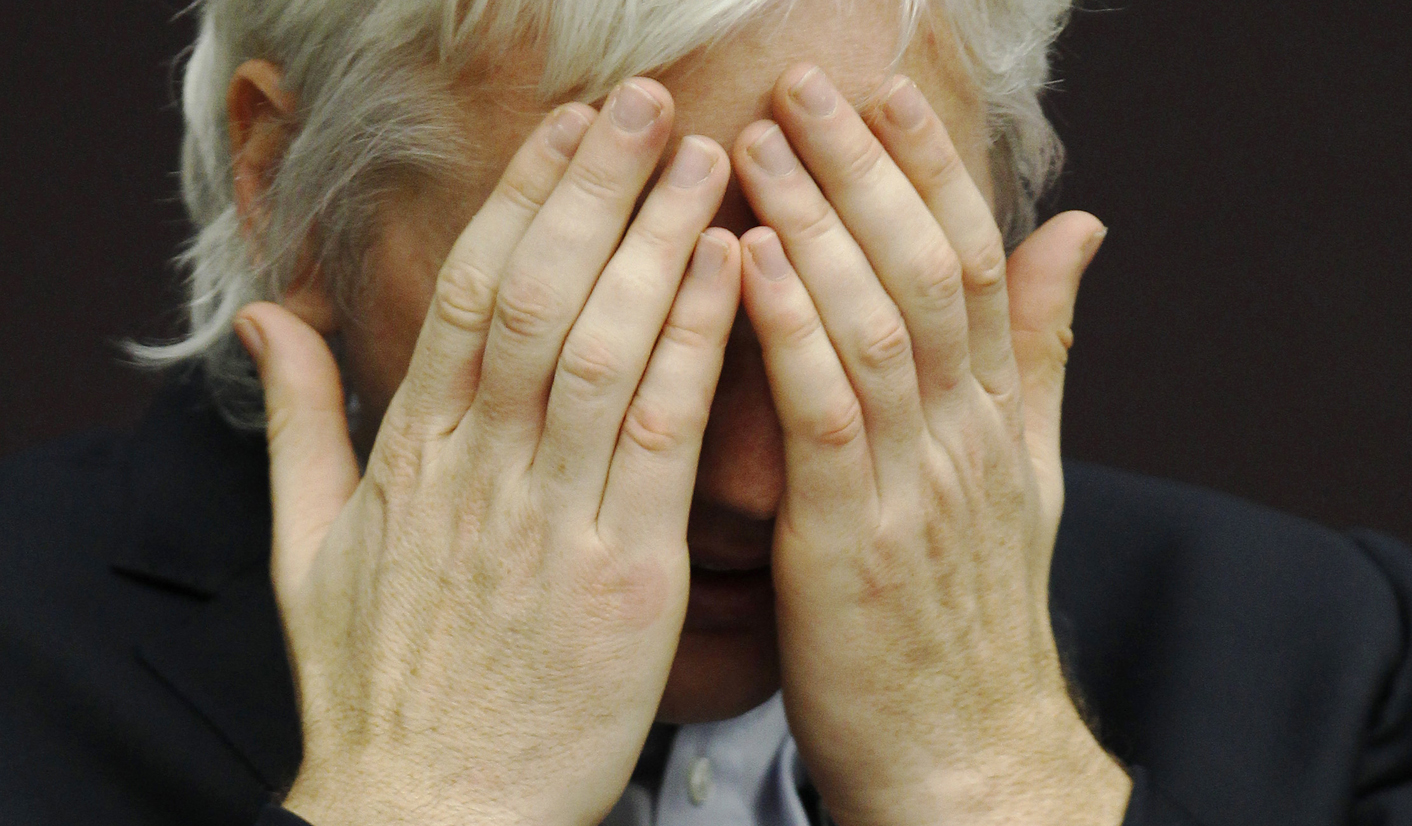 If Ecuadorian president Rafael Correa grants Julian Assange his asylum plea, the Wikileaks founder may escape prosecution in the United States indefinitely. But by holing up in Ecuador’s embassy in the United Kingdom, Assange has already sacrificed the one thing that’s made him a household name — his credibility. By KEVIN BLOOM.

In late May, on The World Tomorrow, his controversial show on the Kremlin-approved news network Russia Today, Julian Assange interviewed Ecuadorian president Rafael Correa. To his critics on the right, this latest guest came as no surprise—Assange had, after all, kicked off his television career by throwing softball questions at Hassan Nasrallah, leader of Hezbollah.

Had there been in any doubt before — and they weren’t, of course, because Assange has always terrified people who fail to appreciate the virtues of anarchy — with Nasrallah the verdict was in: the man was now using terrorist organisations to even the odds in his personal vendetta against the United States.

But the rightists and the conservative mainstream were one thing, what about Assange’s critics in the media? Here the Australian-born rebel faced a more nuanced battle, and, like the master tactician that he is, he pre-empted the moves of his enemy. Before the Nasrallah interview aired, he put out a press release entitled “Smear and Enjoy,” where he quite accurately predicted what the haters would say about him.

“I have decided to hold out an olive-branch to our overworked detractors,” Assange stated in the release, “by writing higher quality smears for them.” Requesting that each journalist take one smear per article, and that they each tweet their chosen favourite alongside the hashtag #smearandenjoy, he provided, amongst others, the following:

Item 2.2: “Putin is a WikiLeaks patsy, allowing his television channel to be manipulated by Julian Assange to become a propaganda network for WikiLeaks!”

Item 2.3: “Nasrallah was interviewed as part of a Russian diplomatic game with Syria. Assange is a pathetic patsy, and a dictator-supporting hypocrite. We all know Russia supports Syria and RT is its uncritical propaganda vehicle. Why else would they interview Nasrallah?!”

Again, that’s exactly what the mainstream Western media said about Assange and Wikileaks in the days following the show’s debut, although in slightly less blatant terms. While Assange, as he did in the press release, would no doubt have boiled the comparatively restrained language down to a journalistic “lack of imagination,” he was still dead-on: the big media organisations called him out for being a hypocrite.

Nevertheless, given what’s happened in the last week, the question must once more be asked—if Assange is able to confidently and correctly predict a media backlash that labels him one thing or another, does this mean he isn’t what the label says he is?

Let’s go back to the interview that aired on The World Tomorrow in late May, the one where he spoke to Rafael Correa. In the show’s opening minutes, Assange introduced the Ecuadorian president as a left-wing populist who’s brought change to his country, noting that unlike his predecessors he holds a PhD in economics. US embassy cables, said Assange—and he would know—painted Correa as the most popular president in Ecuador’s democratic history, a man who in 2010 was taken hostage in an attempted coup.

Continued Assange: “He blames the coup attempt on corrupt media and launched a controversial counter-offensive. Correa says the media defines what reforms are possible. I want to know, is he justified? And what are his visions for Latin America?”

If it was Assange’s intent to find out whether Correa was “justified” in his clampdown on Ecuadorian media, the questions he put fell slightly short of the mark. There seemed to be no sustained effort to follow a specific line, and when the president was asked why he’d recently booted the United States ambassador, the answer seemed tailor-made to fit the Wikileaks founder’s agenda.

“The last straw was Wikileaks,” said Correa, “where she wrote that her own Ecuadorian contacts told her that the chief of the national police was corrupt, and that surely I had given him that post knowing he was corrupt, so that I could control him.

“The lady ambassador was called, and asked to give an explanation. With all her loftiness, insolence, grandeur, imperial airs she puts on, she said she had nothing to account for. And as we here respect our country, we threw her out.”

At the end of the interview, after Assange clapped, smiled victoriously and thanked his guest, Correa signed off with this: “It’s been a pleasure to meet you, Julian, at least in this way. And cheer up! Welcome to the club of the persecuted.”

Not to come down too heavily on the side of the name-callers in the Western media, but this is the same president who in February changed his country’s electoral laws to prohibit journalists from directly or indirectly promoting candidates, proposals or “political theses” during the campaign for the 2013 presidential elections.

Correa has approval ratings in Ecuador close to 80%, thanks in the main to social programmes that benefit the poor and disabled, so it is on the face of it unclear why he would want to ban his country’s media from making political statements. Until, that is, you start to look at which journalists he’s been hunting down.

Juan Carlos Calderon, for example, who in 2010 wrote a book entitled El Gran Hermano (Big Brother), wherein government contracts that benefited the president’s older brother Fabricio were detailed (Calderon is facing a libel suit of $10 million). Or a former editor and three directors of the newspaper El Universo, who face $40 million in collective fines and may soon be jailed, because in 2010 the editor wrote in a column that Correa was a “dictator”.

To be fair, Correa, since he came to power in 2007, has repeatedly claimed that private media in Ecuador is there to serve the interests of its owners—invariably, groups linked to the country’s economic elite. But while he may well have a point, it doesn’t change the fact—as per the Washington Post— that his strategy for dealing with the perceived injustice is “the most comprehensive and ruthless assault on free media under way in the Western Hemisphere.”

Neither does it change what Assange said about Wikileaks back in the days when he wasn’t on the run from sexual assault charges in Sweden: “We are free press activists. It’s about giving people the information they need. That is the raw ingredient that is needed to make a just and civil society. Without that you are just sailing in the dark.”

There are still defenders of Assange out there who claim that the only reason the man is holing up with a repressive populist is because the United States will, if Correa rejects his asylum plea, enforce a “temporary surrender” mechanism in the US/Sweden bilateral treaty, which allows for Assange’s onward rendition to the US to face potential espionage charges. (In case you haven’t been following developments, Assange lost his legal battle with the British courts regarding extradition to Sweden, and last week took refuge in Ecuador’s UK embassy).

The argument seems valid; no man would willingly face charges under the US’s Espionage Act of 1917, mainly because capital punishment is an applicable sentence. Further, as the experiences in US federal prison of Bradley Manning—the soldier who provided the diplomatic cables to Wikileaks—has shown, in this matter there may be fates worse than death.

Yet it’s undeniable by now that Assange is scraping the bottom of the sympathy barrel. The world’s most powerful English-medium newspaper brands, former supporters of his including the New York Times and the Guardian, have turned on him for good reason—the values that he once held dear, the principles of openness and transparency that he once espoused, have been rendered empty by his latest choice of ally.  DM