Pakistan: Was it a coup? And who controls the nukes? 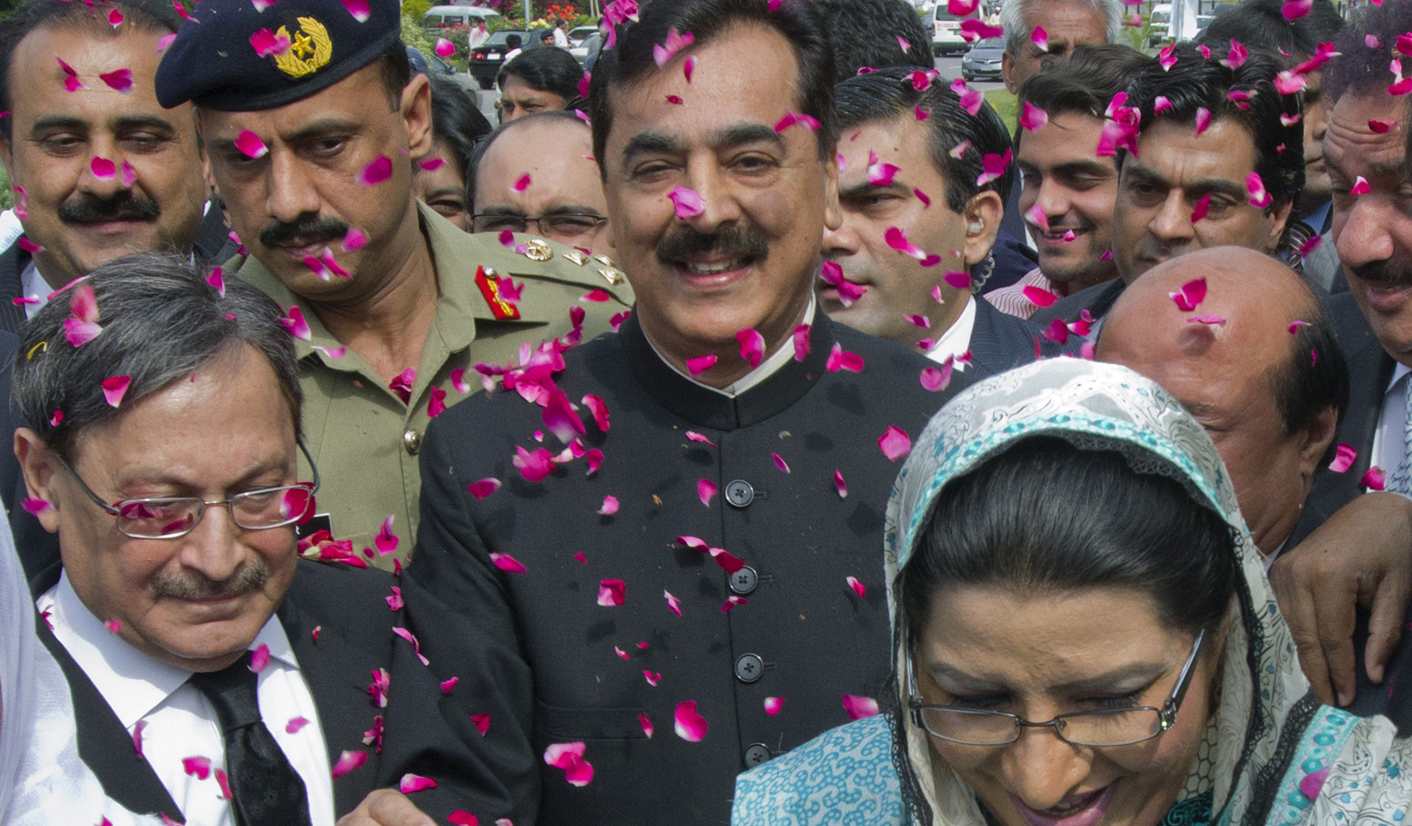 There is an insidious war for power raging among Pakistan’s political elite. A war that, on Tuesday, saw the Supreme Court disqualify Prime Minister Yousuf Raza Gilani from office. But was it a coup? By KHADIJA PATEL

Things seemed to be going so well in Pakistan. Sure, there’s that nasty business of Obama’s drones running amok in Waziristan, and then that other business of frequent bouts of load shedding crippling the country’s urban centres. But the current government was set to be the first government in Pakistan’s history to actually complete a five-year term in the office. Then, on Tuesday, the Pakistani Supreme Court delivered a blow to this glorious “political stability” Pakistan has been enjoying.

On Tuesday the chief justice, Iftikhar Muhammad Chaudhry, ruled Prime Minister Gilani was effectively disqualified as a member of parliament on 26 April. “He has also ceased to be the prime minister of Pakistan, with effect from the same date, and office of the prime minister shall be deemed to be vacant accordingly,” he said. As soon as Pakistanis recovered from the shock, allegations of a judicial coup were levelled against the Chief Justice. This is Pakistan all, after all –where conspiracy theory dances dangerously close with political paranoia.

There is good reason to read more into the court’s ruling.  The judiciary and the executive have been at loggerheads for some time now, each digging into the other while the military and the religious elite, for now at least, seem content to just look on. But on Tuesday it was the judiciary who won the upper hand in this battle, when the Supreme Court disqualified Gilani from office.  This was not a spur of the moment decision. The court’s decision follows Gilani’s conviction in April for contempt of court after he refused to accept a court order to reopen a long-dormant corruption investigation against the president, Asif Ali Zardari, the widower of Benazir Bhutto.

Gilani served a symbolic 30-second period of detention in the court in April, but it was unclear whether he would lose his position as head of the government. To the fury of opposition parties, the speaker of parliament – a member of Gilani’s Pakistan People’s party (PPP) – ruled it was unnecessary for him to stand down.

Gilani decided not to appeal his conviction, in what appeared to be bid to avert further action by the court, but on Tuesday the Chief Justice disqualified him “from membership of parliament” anyway, adding that he “had also ceased to be the prime minister of Pakistan.”

Gareth Price, from the British think tank Chatham House, believes that Gilani’s ouster is telling of the chequered reality of Pakistani politics, where the greater good is being sacrificed in an insidious battle for power among Pakistan’s political elite. “While it is likely to trigger a shuffling of deckchairs amongst the elite, perhaps its greatest significance is in demonstrating the continued inability of Pakistan’s leaders to put differences to one side and tackle the country’s myriad problems,” he says.

Pakistan’s cricketer-turned-politician Imran Khan, who, along with Nawaz Sharif, the main opposition leader, asked the Supreme Court to disqualify Gilani, said the judgement struck a blow for ordinary people against the governing “kleptocracy”.

Arif Rafiq, a Washington DC-based consultant on Middle East and South Asian political and security issues, calls the battle between the Pakistani executive and the judiciary a “grudge match”. While he acknowledges that the judiciary now have the upper hand in this match, he points out the length of time it’s taken the judiciary to assert itself on this matter. When Gilani refused to re-open the corruption case against Zardari the judiary, he says ended up looking like a “paper tiger” – entirely unable to challenge Gilani’s contempt with consequences outside the courtroom.

The judiciary, then, has bided its time well, striking Gilani out of his complacency and entirely out of the government. Rafiq is confident Gilani will go quietly. “The party called an emergency meeting soon after the judgement was announced, they are already looking to appoint a successor,” he said. “Previously the PPP have had no qualms about playing the victim card, but this time it seems they are concerned with holding on to power.”

The PPP, then, have been triggered into survival mode. “The matrix through which the PPP determine their success is not on how well their policies are faring, but rather on their political survival,” Rafiq said. “For Zardari and the PPP, they should be able to bounce back from this set back quickly, installing a new government and crucially Zardari, the subject of so much political animosity, is left unscathed.” Rafiq succinctly observes that Gilani ultimately fell for protecting Zardari, “for being his bodyguard”.

Zardari, meanwhile, after receiving the backing of his party and its coalition partners to select a successor for Gilani, has called an emergency session of the National Assembly on Thursday. Zardari cancelled a trip to Russia to weather the growing political storm, but his own role in the abrupt end of Gilani’s career not above scrutiny. Some analysts believe the next prime minister, whoever he is, will also face pressure from the judiciary to reopen the corruption probe into Zardari. Gilani consistently stood by Zardari’s claim that the president could not be prosecuted while in office, going as far as saying he would be willing to go to jail on a contempt conviction rather than pursue a reopening of the case.

The corruption allegations stem from a 2003 Swiss court conviction of Zardari and his late wife, Benazir Bhutto, in absentia, for laundering millions of dollars in bribes from Swiss firms while Bhutto was in power. Bhutto was assassinated in 2007, and Zardari assumed leadership of her party and the presidency a year later. Swiss authorities dropped the case at the request of the Pakistani government in 2008, a year after military ruler Pervez Musharraf granted an amnesty for politicians and bureaucrats accused in corruption cases. The Supreme Court in 2009 ruled that the amnesty was unconstitutional and ordered the reopening of the cases that had been set aside, including the Swiss case. Three years later, the Supreme Court has still not backed down.

Does the upper hand gained by the judiciary translate into a judicial coup, though? Rafiq is hesitant to pronounce on whether it was really the judicial coup mentioned by so many analysts. “The judiciary is definitely partisan,” he says, “It is a hyperactive judiciary, but Gilani did ignore the orders of the court by refusing to reopen the investigation – it demonstrates a unique case of the executive being held accountable to the judiciary.”

As a “hyperactive” judiciary, the Pakistani judiciary is currently embroiled in its own sorry saga of corruption. Some analysts believe the entire spectacle of disqualifying Gilani from office was actually orchestrated to draw attention away from corruption allegations involving millions of dollars that have been levelled against the chief justice’s son – allegations that may impact on the chief justice’s own integrity.

Just this week, Foreign Policy magazine rated Pakistan among the world’s failed states – a moniker that rankles with many Pakistanis. But the latest political upheaval will not help remedy the perception of Pakistan as a kind of Somalia with nukes.

The control of Pakistan’s nuclear weapons is a charged issue. In theory, the prime minister should be in control, as chairman of the Nuclear Command Authority (NCA) that handles the command and control of strategic nuclear forces and organisations. But it is the army leaders who have the final say in the use of nuclear weapons if ever they are needed. Many then believe it is the military that has encouraged the Supreme Court to undermine the government, in the hope of ensuring a non-PPP government in the next general election.

Beneath the political power play lies a maze of problems, but one of them – the mismanagement of the country’s power supply – is fast becoming the greatest gripe Pakistanis have against their government. A murky culture of corruption allows politicians and power companies to shift the blame without getting anything fixed. And yet this one problem may well be fixed in a matter of months – if only Pakistan could find itself leaders with enough time and ambition to actually help the lot of ordinary Pakistanis. DM

Photo: Supporters of Pakistan’s Prime Minister Yusuf Raza Gilani shower him with rose petals as he arrives at the Supreme Court in Islamabad April 26, 2012. (REUTERS/Faisal Mahmood)