The passing of the ‘Mt Kenya mafia’ 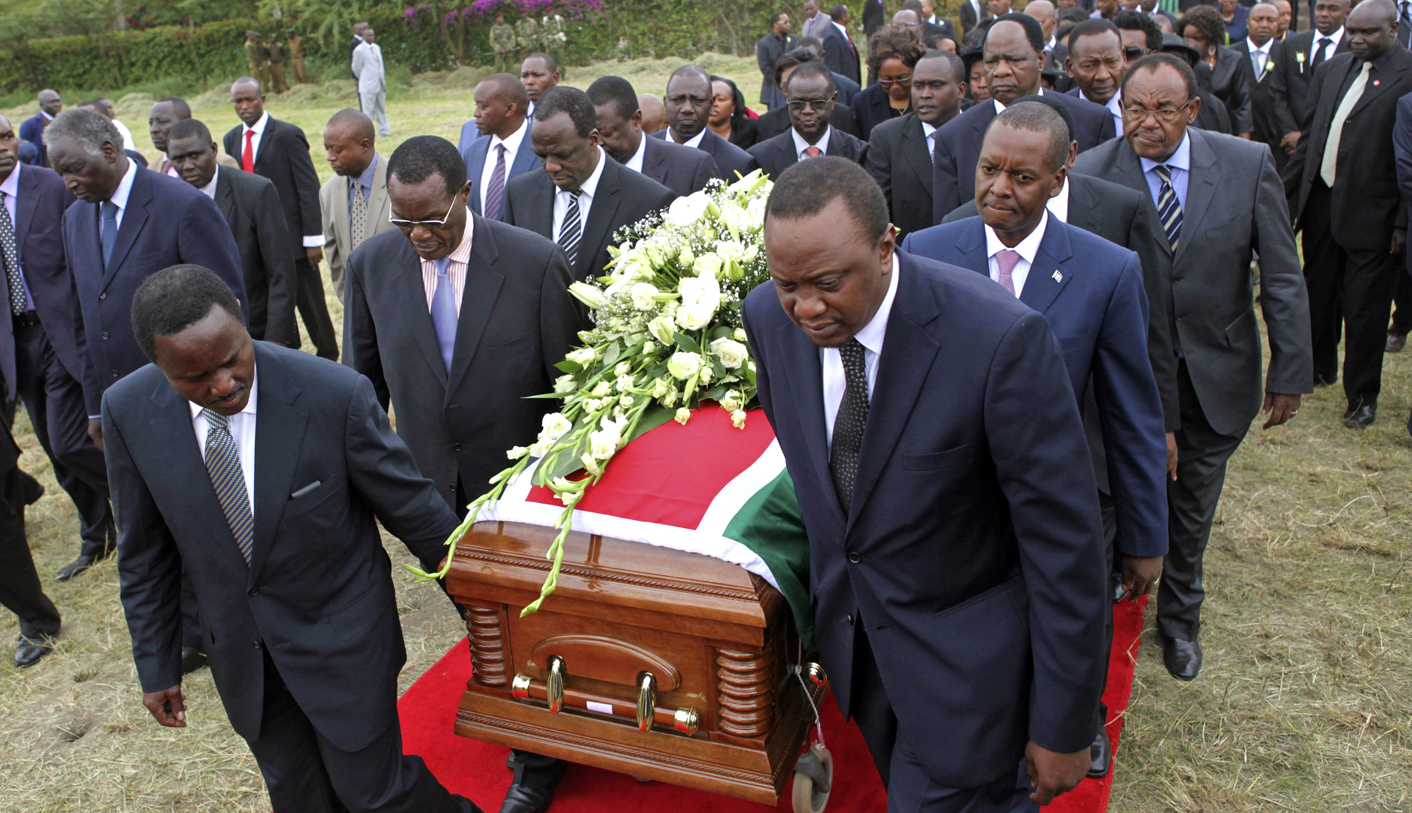 Kenya’s political elite have needed their funeral wear in 2012. They’ve said goodbye to three of the country’s most powerful men, the untouchable gentlemen of post-colonial power. Now, a pall hangs over the country as it approaches its challenges without its godfathers. By GREG NICOLSON

As mourners gathered to farewell John Njoroge Michuki in February, one of his colleagues proudly admitted the billionaire politician had taught him the art of public speaking.

President Mwai Kibaki, sadly, looked to have got an oration lesson from Jacob Zuma. He said he’d relied on the 80-year-old’s opinion throughout his career and “most importantly he was a man who kept his word”. Prime Minister Raila Odinga called on every Kenyan to plant a tree for the late environment minister.

“He symbolised that crop of leaders, ever so rare in our society, who rationalised a policy direction and dedicated their energies to measurable goals without consideration of focus group and popular sentiment, like many of his colleagues do,” wrote Dr Mukhisa Kituyi, director of the Kenyan Institute of Governance.

But Michuki was one of a wealthy ruling clique that influenced politicians behind fences of entitlement. He was a part of the old guard from Central Province, a group of Kikuyus who monopolised political power.

After serving the British as a district officer, Michuki was quick to join the nationalists in independence. The spoils rolled in, writes Jandi Kisero in the Nation. “State- controlled institutions extended cheap credit to top civil servants and the political elite of the day to buy property left behind by Kenya Asians leaving the country after being given quit notices.

“The regime of President Jomo Kenyatta presided over an extensive spoils system, allocating land and coffee farms formerly belonging to white settlers to top civil servants and cronies of the President, excising public forests and giving it away on the basis of loyalty.”

Famously, he was said to be behind the raid on The Standard newspaper’s offices in 2006. Internal security minister at the time, Michuki was accused of using Armenian brothers as mercenaries to lead a team into The Standard. In parliament he said it was “necessary action to avert a threat to national security” and was famously unapologetic when hounded by journalists. “When you rattle a snake, you must expect to be bitten by it,” he warned.

Only days after Michuki’s death, Kenyan politicians were at the gravesite of 83-year-old former cabinet minister Njenga Karume, who was born into poverty but became one of Kenya’s richest men. Again the country heard the man had been an example to the nation.

“Despite Karume’s immense wealth and high social status, he remained humble, affable and generous,” former president Daniel arap Moi said at his funeral. “He was always in touch with ordinary people.”

But Karume was a billionaire businessman who controlled Kenya’s beer distribution and had an uncanny knack of surviving and influencing different governments.

Both Kikuyus lived in an era where leaders were accused of enforcing one law for the public and another for the powerful. While their eulogies were glowing, they’re remembered with the mystery surrounding gangsters, rumours of outrageous puppeteering that only a select group of country club elite can confirm or deny.

But that group continues to dwindle. President Kibaki was again at the funeral of one of his ministers on the weekend. Head of internal security George Saitoti died in a helicopter crash and the president urged all Kenyans to follow his devotion to non-tribalism and national unity.

“Let us say with one voice that we are going to follow those steps he (Saitoti) wanted us to follow,” said Kibaki at his burial ceremony. Former Ghana President Jerry Rawlings said: “If we could imbibe the good manners it would reduce the animosity that is transmitted downwards.”

Under Arap Moi, Saitoti was Kenya’s longest-serving vice president. Being both Kikuyu and Maasai he wasn’t able to draw the regional support of some rivals, yet he was a fixture in parliament. Whether his constituents liked him or not, he was always there and tipped as a strong presidential candidate in 2013.

Although younger than Michuki and Karume, Saitoti sat in the same echelon and his story wouldn’t be complete without an attempted assassination. His life was reportedly in danger after his food was once poisoned. Until his death, it’s said, he wore a bulletproof vest and would eat only at familiar restaurants, still looking over his shoulder. Good thing too – he was the driving force behind Kenya’s current war with Al-Shabaab in Somalia.

It’s said the men were typical of their age – resolute in their commitment to Kenya despite the contradictions arising from their work as shadow powers. If so, it’s the end of an era, the end of the “Mt Kenya mafia”.

Their deaths symbolise more than the passing of the extremely wealthy and powerful. It’s now clear that Kenya’s near the end of a generation. The old guard were tried in the crucible of colonialism, tested in a nascent state, and flourished, like their colonial predecessors, in exclusive country clubs.

There’s no shortage of new patrons lining up for the exclusive Windsor Golf & Country Club, but the Young Turks haven’t the craft of their mentors. Heavyweights like the country’s richest man, Uhuru Kenyatta, and William Ruto face charges at the International Criminal Court relating to the post-election violence. Others are still trying to figure out the country’s new constitution and convince the world there won’t be a repeat of the violence.

After taking office in 2002, President Mwai Kibaki ensconced himself within an influential group of well-connected, elder statesmen. He was criticised for being aloof, but that was because his key constituents, said his opposition, were the old guard from Central Province who supported him at election time and were advantaged in business when Kibaki was the country’s finance minister.

Kibaki’s not running in next year’s election. The men who defined Kenya’s post-colonial politics are on their way out, and before Kenyans can predict what will happen next, they’re just trying to get used to the fact that the new generation will take over. DM

Photo: Cabinet officials wheel the coffin of Kenya’s internal security minister George Saitoti during his burial ceremony at his farm in Kitengela, south of capital Nairobi June 16, 2012. Saitoti, who was closely involved in the fight against Somali militant group al Shabaab, was killed when the police helicopter he was travelling in crashed into a forest on Sunday. (REUTERS/Noor Khamis)