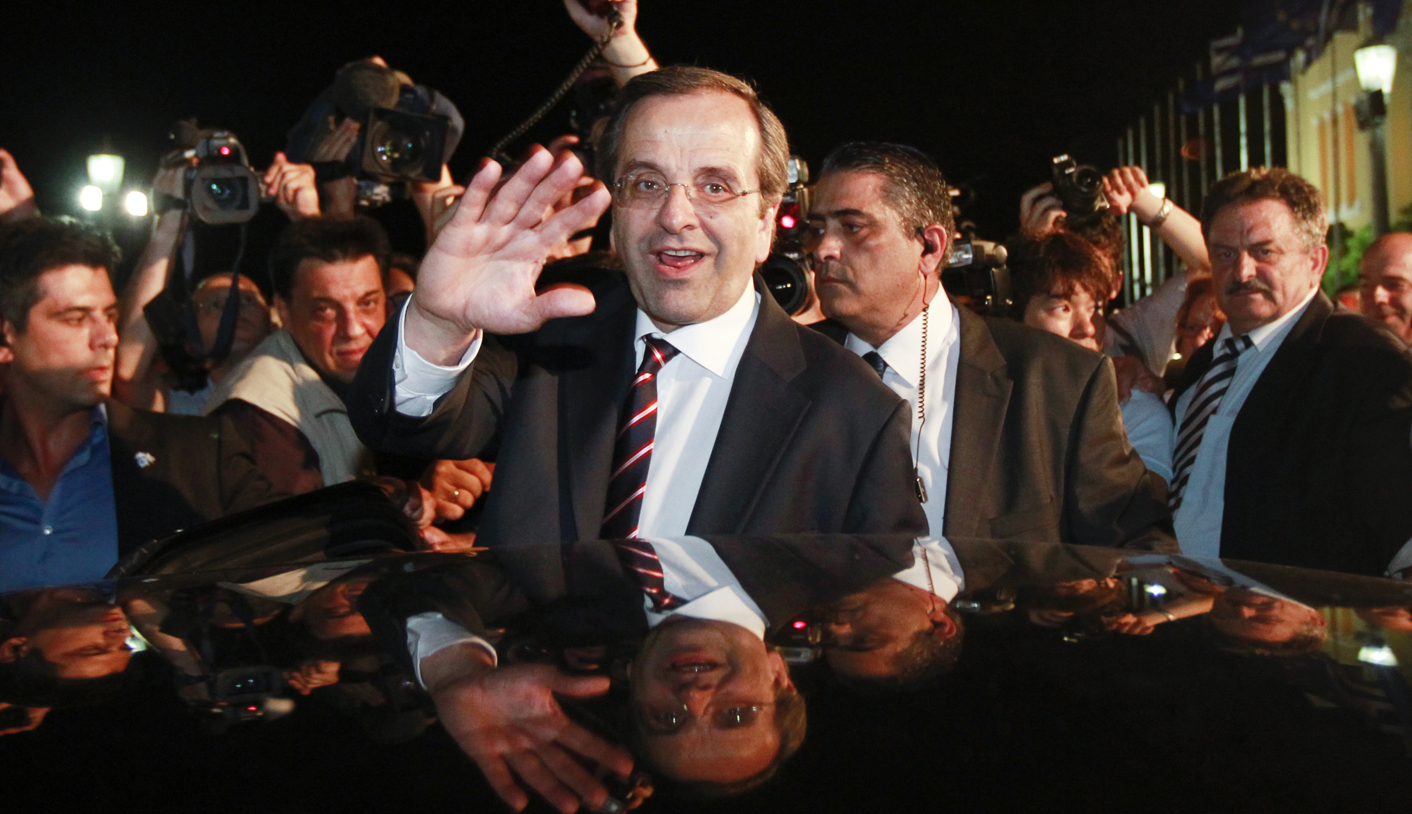 Greek parties promised on Tuesday to form a coalition government soon which will seek concessions from the country's EU and IMF lenders on its punishing austerity programme, and the euro zone signalled it was ready to renegotiate the bailout deal. By Renee Maltezou and Lefteris Papadimas

Representatives of the conservative and socialist parties, along with another centre-left group, were due to discuss a programme for the coalition following elections on Sunday and possibly the make-up of a new cabinet.

Germany, the biggest contributor to the rescue which is keeping Greece from bankruptcy, opposes major changes to an austerity drive that has worsened its economic depression.

However, a senior euro zone official said that trying to enforce the original terms of the 130 billion euro bailout as the Greek economy slides deeper into trouble would mean “signing off on an illusion”.

“We’re heading to a meeting now to discuss the programme and the possible faces in the new government,” an official from one of the parties said, requesting anonymity.

“Greece must and will have a government as soon as possible,” Venizelos said after a meeting with Fotis Kouvelis, head of the small Democratic Left party. “There is a need to form a national negotiating team that will deal with revision of harsh terms of the bailout deal.”

European partners, notably from the bloc’s biggest economy Germany, have held out the prospect of extending some payment deadlines but they have repeatedly insisted that the basic conditions of the deal cannot be renegotiated.

“The new government must stick to its commitments, which the country has agreed on,” German Chancellor Angela Merkel said at a meeting of leaders from the Group of 20 major economic powers.

However, the euro zone official said the Memorandum of Understanding (MoU) with Athens had to be renegotiated.

The official said circumstances had changed in Greece, which lapsed into political paralysis when elections in May produced a stalemate, forcing Sunday’s re-run.

“Anybody who would say that we need not, and cannot renegotiate the MoU is delusional, because he – or she – would be under the understanding that the whole programme, the whole process, has remained completely on track ever since the weeks before the Greek first election,” the official said.

With austerity and privatisation programmes hit by the paralysis, and tax receipts dwindling as the economy shrinks further, the official dismissed the idea of not revising the deal.

Hopes that the government may be in place by the end of Tuesday earlier suffered a setback when Kouvelis, whose party opposed the bailout deal in the election campaign, said several points remained open and agreement might take longer.

“There will be a government, but I don’t know if it will be formed by tonight. I believe we will have reached an agreement by the end of the week,” he told reporters.

Earlier, a senior New Democracy official said he expected a deal with PASOK would be reached by Tuesday. Samaras has three days to form a coalition before his mandate from the Greek president runs out.

New Democracy and PASOK alternated in power from the fall of military rule in 1974 until last year, when Greece’s economic crisis forced the arch rivals to share power in a pro-bailout national unity government.

But PASOK’s support has plunged this year, leaving it a distant third behind New Democracy and the leftist SYRIZA party, which wants to cancel the austerity measures in the bailout package and negotiate a new “national recovery plan”. Its strong performance has cast doubt on Greece’s future in the euro zone.

There has been a marked shift of tone since the election as leaders of the parties that had previously broadly supported the bailout have talked openly about easing the tough conditions demanded by the European Union and International Monetary Fund.

In a sign that Greeks themselves have taken some confidence that the danger of immediate leaving the euro zone had lifted, banks reported that some deposits withdrawn in the run-up to the vote appeared to be trickling back.

“We didn’t have any deposit outflows yesterday, and we are expecting a similar picture today,” said one banker, speaking on condition of anonymity. “The election result helped. On the contrary, we had small inflows of up to 10,000 euros from people who kept cash at home.”

New Democracy took a 50-seat bonus under Greek electoral law for coming first, and a New Democracy-PASOK alliance would have 162 seats, a majority in the 300-seat parliament. Adding the Democratic Left would give it 179 seats.

A new government still faces the daunting prospect of imposing further austerity cuts on a nation deeply divided over the price for bailout funds and facing an emboldened SYRIZA, lifted by a wave of public anger against the old parties.

With Greece just weeks away from running out of cash and a new government needed to negotiate the next instalment of funds from lenders, Greek political leaders are under heavy pressure to avoid a repeat of the deadlock seen after a first and inconclusive election on May 6. DM