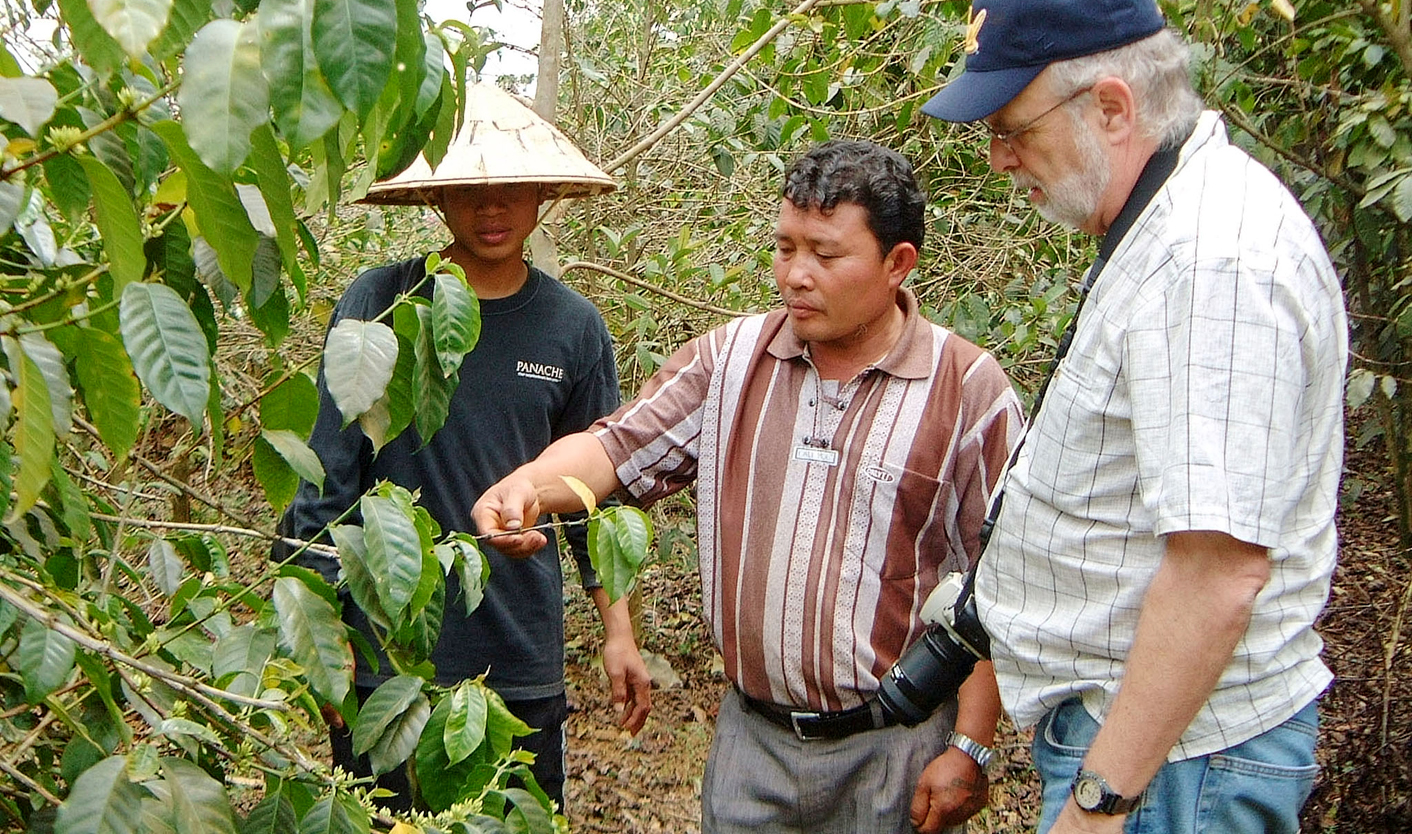 It is an increasingly familiar tale in Laos: poor farmers are pushed off their ancestral lands by corrupt local officials to make way for capital-rich, foreign-invested plantation agriculture. But the tenacity of one small group of agrarians who are fighting back has revealed the abuse of power that attends many Lao land dealings, representing a landmark case in the country's often opaque and obscure authoritarian politics. By BEAUMONT SMITH.

In a classic David versus Goliath struggle, farmers in Paksong, southern Laos find themselves pitted against Singaporean coffee company Outspan Boloven, a subsidiary of agribusiness giant Olam International. The company won a government concession to plant coffee on what the protesting agrarians claim were illegally seized lands.

The farmers have staged rare protests in communist-run Laos, bringing national attention to their grass roots plight and perceived high level corruption in the land deal. Puan, a thin, angular-faced man involved in the fight, said during a recent trip to the national capital to air grievances, “We will die for our land.”

A Vientiane-based Lao lawyer, who declined to be named because he is providing informal legal advice to the group, agrees that violence is often the only recourse for farmers victimized by state-backed land-grabbing. “Maybe some have to die so that the world takes notice of what is happening in this country – the misuse of power, the suppression of protest,” he said.

A delegation of the aggrieved farmers first came to Vientiane in late February and by several accounts were heavily harassed by officials, forcing them to move between safe houses. An interview on national radio with the group’s members is believed to have triggered one popular call-in program’s cancellation (see Off the air in Laos, Asia Times Online, February 22, ’12).

Apart from protests, the group has twice pleaded for intervention with the legal department of Laos’ National Assembly, each time presenting detailed dossiers of their claims to the land to the Petitions Office. Both times officials’ have made empty promises to investigate the situation, they claim.

The Vientiane-based Land Issues Working Group (LIWG), a nongovernmental organization that has supported the case, is known to have mediated with Outspan Boloven representatives and on behalf of the group approached the local Singapore Embassy.

Those efforts, however, have so far failed to cool grass roots passions. “We don’t want an agreement; we want our land back. They [company representatives] came to the area last week but no one talked to us. They should leave,” Puan insisted, the rest of his group nodding in agreement.

The organic coffee grown by smallholder farmers on the Boloven Plateau commands premium prices in global markets, and has fueled a surge of trendy coffee shops in Lao cities. The rich volcanic soils and conducive climate of the country’s southern plateau has recently attracted foreign investors to the organic growing region.

In 2010, Sonexay Siphandone, Governor of Champasak province and former Communist Party Secretary, granted Outspan Boloven the use of 150 hectares of prime agricultural land on a 30 year concession basis. Siphandone hails from one of the country’s most powerful political families, with known commercial interests spanning hydropower, hotels and land holdings.

The concession represented the maximum amount of land that could be legally granted by a provincial authority; larger concession land areas require national level approval.

LIWG noted in a report that under such concessions companies often start clearing land after receiving the maximum plots allowed by the provincial government while their request for more land is pending in Vientiane. In the case of Outspan Boloven, LIWG notes, the clearing had been ongoing while national approval was still pending.

Over the protests of local farmers, the company expanded its original 150-hectare plantation to more than 1,100 hectares, impinging on over 140 hectares of productive village lands, burning high value trees such as rosewoods and teak, and desecrating graveyards and ancestral shrines in the clearing process, according to aggrieved farmers.

Already 1,460 hectares have been planted with coffee, and the company has announced plans to expand its holdings to 3,000 hectares.

Video shot in the contested area in Paksong a week before the delegation arrived in Vientiane showed piles of burnt and smoking timber and bamboo clumps. Bare earth exposed by company bulldozers is ringed by openly distraught villagers.

“Outspan gave the villagers 20 tons of rice three years ago. That was for over 1,000 people. But in the long run how can the families of Nong Mek, Nong Tua Nong Hin and Nong Tiem [villages] live?” asked the filmmaker who declined to be named for reasons of security. “We will have to send emergency food aid down to the families that are starving.”

His accounting shows that some 52 families have lost all of their land and income sources, including the uprooting of their own coffee trees. None of the affected families were compensated for the land or their loss of livelihoods, nor were any formal agreements or contracts signed with village leaders, he says.

Soon after the agreement with the governor’s office came into force, Outspan Boloven brought in tractors and leveled the ground without any local consultations. “They worked day and night. The noise and light did not allow us to sleep,” Puan grumbled. “We went out and tried to stop them, but they told us we had no rights anymore as the land had been granted by the governor.”

Soumpheng, a village head in the area settled by the ethnic Nya Hitun/Yahern minority, takes issue with that interpretation. He says attempts to get an explanation from the local district and provincial offices were met variously with obfuscation, lies and threats.

“The land was granted to us by the (former) Royal Lao Government in 1901…The French colonials brought coffee in 1954 [and] later we fought to make them leave our land, just like we fought against the Americans. So we are veterans of fighting and are unafraid,” he said.

“After the socialist government forbade shifting cultivation, we had no trouble diversifying. We planted lots of commercial trees and other subsistence crops. The money we got enabled us to pay our land tax. We have been awarded certificates of appreciation because we always paid our taxes on time,” he added.

LIWG’s analysis supports the basis of these complaints. “Clearance of crops appears to have taken place before permission was given by village leaders in regard of private and crop-cultivated communal land, although the survey report said that Outspan [Boloven] should obtain permission from village leaders first before clearing.”

The company claims to be among the world’s largest suppliers of coffee, sesame, cocoa, rice, spices, peanuts, cotton and tropical hardwood products, supplying over 11,000 different customers. Coffee from the first harvested Outspan Boloven crop has already been exported to California, according to the company.

The company’s local office could not be reached for comment, but its central office in Singapore responded to queries about the controversy through Gong Communications, a London-based public relations company.

Sara Firouzyar, a Gong Communications representative, said Olam International was concerned about the local protests against the plantation. “We believed in good faith that we had followed national laws and relevant processes,” she said.

Firouzyar said the company first learned about the protests from LIWG, rather than the subsidiary’s representatives, and that an independent three-person team – comprised of one Lao and two Dutch nationals – had since been engaged to investigate and perform an audit on the situation.

Firouzyar said that Olam also promised to hold 12 stakeholder meetings, which, if they happen, “may cast unwanted light on government corruption and ineptitude.”

At the same time, she maintained that the project was consistent with “Olam’s Livelihood Charter”, which states the company aims “to bring prosperity to our farming and rural communities. We build long-term relationships based on fairness and trust. We seek to transfer skills and knowledge through partnerships.”

Olam International declined to respond to how the company would meet the demands of protesting farmers who are fighting for a return of their seized ancestral lands.

“We are also actively recruiting a qualified, local community specialist to be based in Laos to ensure that we are able to build strong local relationships going forward,” said Firouzyar. At the time of this writing, the composition of those committees was still being negotiated.

Some hope that Olam International’s apparent willingness to negotiate might provide Lao civil society with a much needed fillip, as well as provide a lightning rod for land rights reform. Laos ranks 158th out of 180 countries surveyed on Transparency International’s global corruption perception index, a ranking influenced by a recent surge in official land grabbing.

Although not reported in the state-controlled press, land grabbing is fueling rising rural unrest across the country, according to NGOs monitoring the situation. They feel that Governor Siphandone’s role in granting the controversial Outspan Boloven concession, as well as similar land concessions he has given in the area to Vietnamese agribusiness investors, should be opened to public scrutiny.

Farmers like Puan, however, have lost all faith in official channels for transparency and justice. “This is our dignity and our lives” he said. “We are not afraid to die.” DM

Beaumont Smith is a freelance journalist.