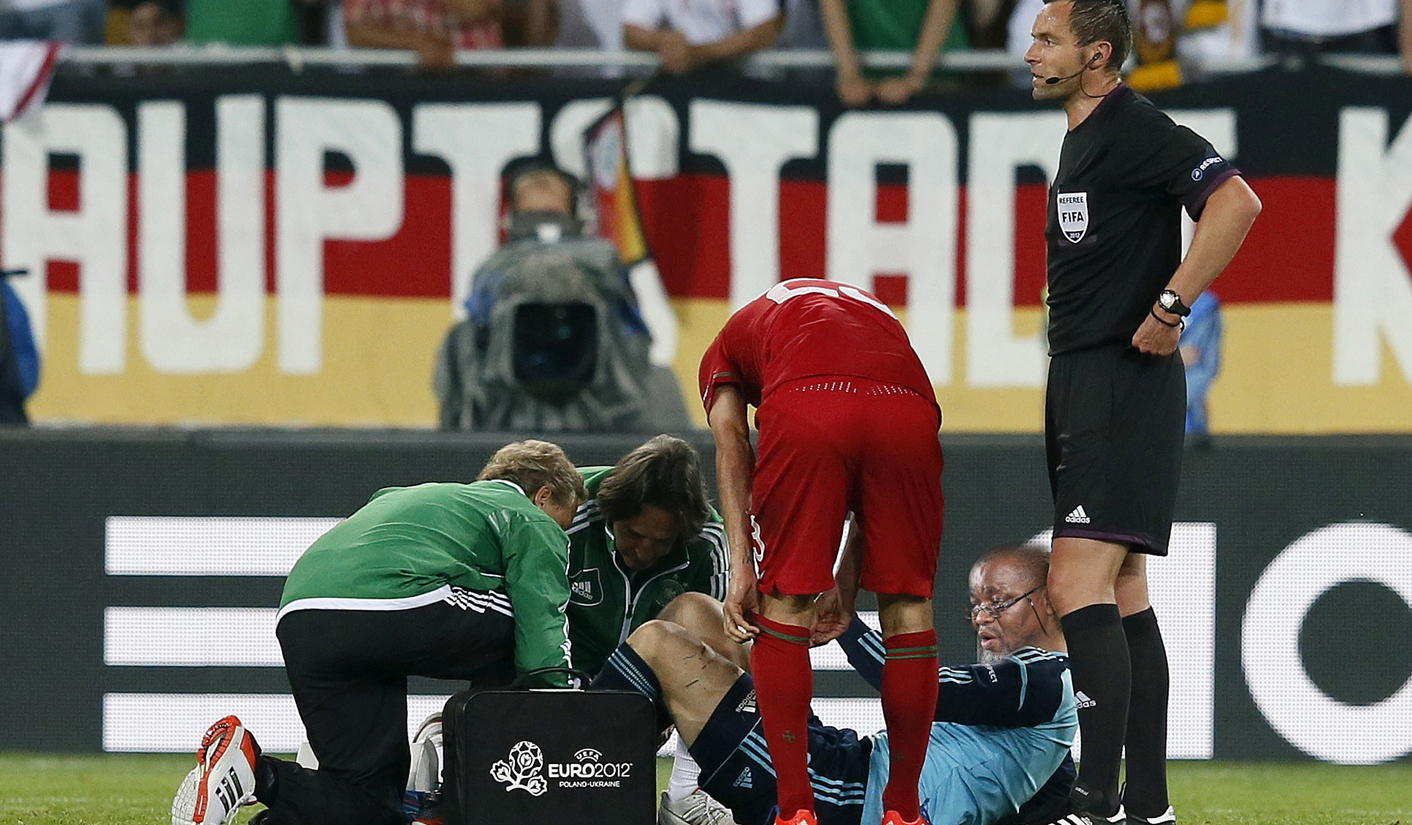 Soccer and the ANC government have much in common. They’re great at theatrics, but it’s just a smokescreen to win favours and score points. The real dirty business is happening off the pitch, whether it’s match-fixing or tender-rigging. By CHRIS GIBBONS

Turn on your TV at any point during the Euro 2012 soccer and you’ll see players collapse to the ground, faces contorted in agony, writhing in anguish. To the uninitiated, such grimaces clearly mean nothing less than a broken leg. Or two. Perhaps even life as a paraplegic.

Again and again it happens. Were you to freeze the action, count up the maimed and broken limbs, the destroyed and shattered bodies, you would surely conclude that there could not be enough hospital beds in all of Poland and Ukraine to cater for the carnage. But no, hold on – a moment or two later, the same players are back up on their feet and merrily chasing the ball as if nothing had happened.

The initiated know that in fact nothing did happen. The strident histrionics are there purely for the benefit of the referee’s decision coming their way. Perhaps he’ll award a free kick? An Oscar-winning performance could scoop a penalty, maybe? An opponent might even be sent off?

Such antics are against Fifa’s rules, which state that a “dive” – a deliberate piece of theatrics staged as a bid to gain an advantage – should be penalised with at least a yellow card. Can you recall the last time in these, or any other championships, when you saw a diving player yellow-carded? Again and again it happens. It’s blatantly obvious, but the referees ignore it. The result? It gets worse.

Meanwhile, back in the European leagues, Fifa also appears powerless to stop the scourge of match-fixing. Just this last season, a number of senior Italian players and officials were suspended amid allegations of match-fixing. How many times has this happened in Italy, let alone elsewhere? We’re still none the wiser about the match fixing that went on here in South Africa in the run-up to World Cup 2010. We know it happened – we think we know how – but no one has yet been sanctioned apart from a lone Pakistani – or he may be Indian – who is already in jail.

You may therefore conclude that soccer is a sport spoiled by administrators who can’t enforce their own rules, either on the pitch or off. The public sees the diving, but there is no doubt that the match-fixing behind the scenes has the greater potential to destroy the “beautiful game”.

The ANC’s display during the recent Spear controversy was blatant political diving.

Hundreds, if not thousands, of angry Jacob Zuma supporters hurled themselves to the ground, writhing as they clutched their wounded dignity. They rolled back and forth in anguish, hands dragged agonisingly across their faces, but, like many a Euro 2012 player, we could see they were peeping between their fingers, keeping a close eye on the referee. Would he book the Goodman Gallery? Would Brett the Artist be sent off?

A blatant dive by the Film and Publication Board was ruled offside, when one of the match officials explained that they weren’t even allowed to officiate this league. And then, as soon as it looked as though the fixture would go into extra time at the Constitutional Court, the Goodman Gallery conceded the match and the ANC scooped the points. Which is the point of diving, after all.

Like the hospitals of Poland and Ukraine, if the affront to the ANC’s dignity had been real, South Africa’s psychologists would be working overtime and the psychiatric wards overflowing. Once the full-time whistle was blown, everyone stood up, dusted themselves down and got on with the bigger political match. No harm done, in fact.

But like match-fixing in soccer, off the political pitch in South Africa, tender-rigging goes unabated. Protest marches here and there are dramatic, they catch the spectators’ attention, but they are – perhaps like diving – only part of the hurly-burly of the modern political game. It’s the tender-rigging and defrauding of the public purse that have the potential to really destroy this “beautiful state”.

Part of the problem in both international football and South African politics is that the real villains can be very hard to detect. There is no doubt that amidst all the histrionics in Poland and Ukraine, there have been some nasty professional fouls. Earlier this week, in the game against Russia, a young Polish player was left with blood streaming down his leg from a gashed shin. TV viewers could see the stud mark very clearly: the Russian had gone in late, with studs raised. The rule book says he ought to have been sent off. The referee disagreed. Perhaps he saw something different. The Russian played on.

Soccer aficionados may also recall Wimbledon defender, Vinnie Jones, now a perma-tanned actor in Hollywood. In the days when the Dons were the dirtiest side in the English League, Vinnie’s speciality was to back up to an opponent while waiting for a corner or free kick. With his body shielding the crime, he would then reach behind him and crush the other man’s testicles. Brutally effective, highly illegal but extremely hard for the referee to spot.

We’ve seen similar examples here over the past couple of years. An equivalent would be the brutal 2010 attempt at intimidation of the Sunday Times journalist, Mzilikazi wa Afrika, by then national police commissioner “Vinnie” Cele, who called Wa Afrika “a very shady journalist”. With the help of lawyers and some public outrage, Wa Afrika managed to dislodge Cele’s hand from his nether regions. It’s fitting that Cele himself has just been red-carded.

The ultimate parallel between the two spheres – soccer and South African politics, that is, not the orbs Vinnie Jones was searching for – is that both Fifa and the ANC government talk a great deal about their high-mindedness and adherence to principles. For Fifa, it’s the endless promises to stamp out corruption and to impose discipline on the players. Team captains wear armbands marked “Respect” and the same word is emblazoned around the grounds. How much “Respect” do the fans see down on the pitch?

The ANC’s equivalent of “Respect” is the continuous invocation of the Constitution and its key components, like the separation of powers and freedom of speech. The team captains – Jacob Zuma and his lieutenants – wear their adherence to the Constitution like armbands. But down on the pitch, the fans can see that Team Zuma would be a lot happier if things changed. After all, why did it take so long for them to blow the whistle against Cele? Or the late Sicelo Shiceka? Or Gwen Mahlangu-Nkabinde? Or any of the other crop of current players who strut around the pitch, yet deserve a red card, an appearance before a disciplinary panel and a possible life ban?

Despite all protests to the contrary, the fans know that the diving will continue, as will the political marches and protests. Off the pitch, it will be match-fixing and tender-rigging. In both soccer and the government of South Africa, it’s business as usual. DM