Russians protest against Putin despite pressure 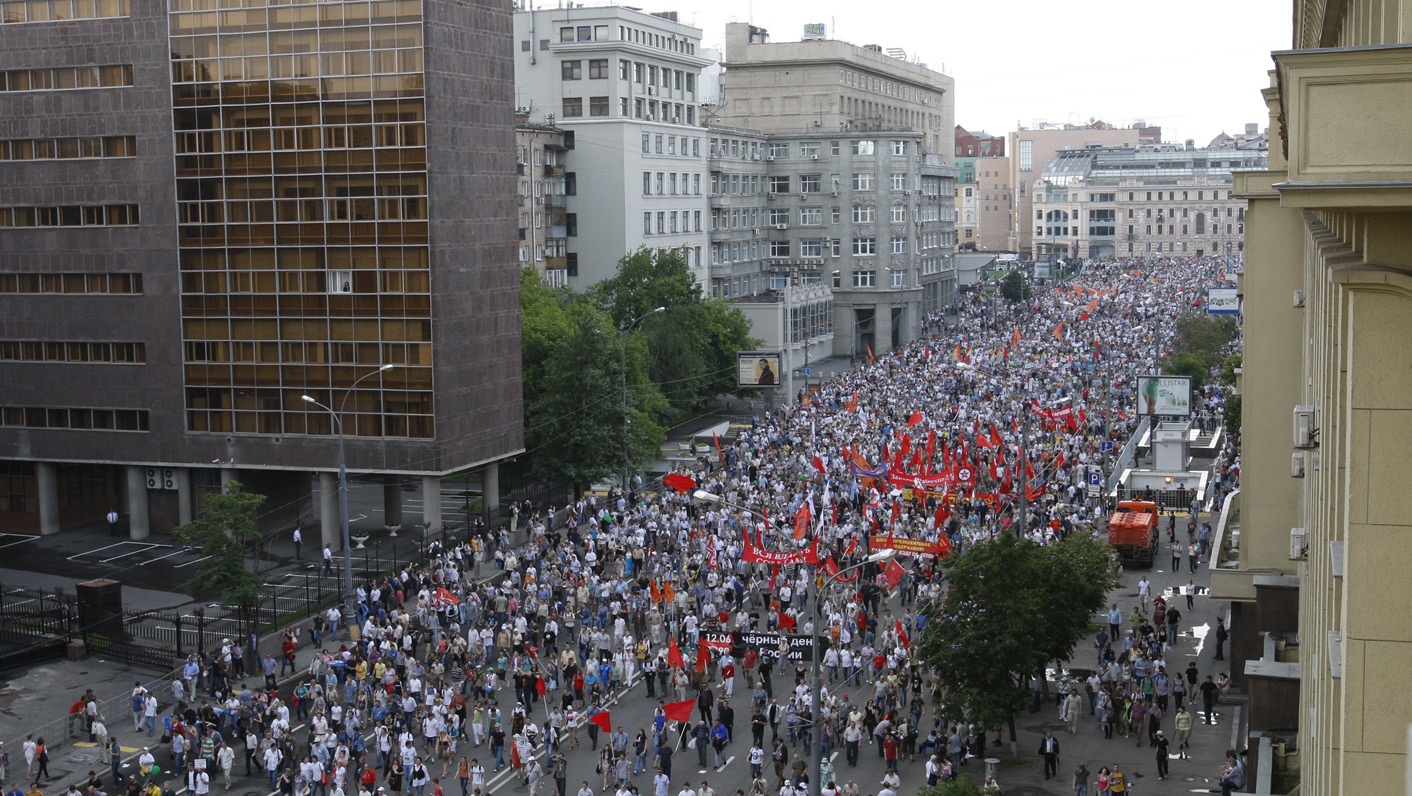 Tens of thousands of Russians marched through Moscow amid a stream of banners demanding President Vladimir Putin step down and challenging new laws designed to curb protest against his strongly centralised rule. By Alissa de Carbonnel and Nastassia Astrasheuskaya (Reuters)

Protesters chanting “Russia without Putin!” and “Putin is a thief!” moved in pouring rain down a central boulevard and packed a square in the first big opposition rally since the former KGB officer’s return to the Kremlin for a six-year term on May 7.
“We propose to rid the country of this usurper who wants to rob us and rule for life,” former deputy premier Boris Nemtsov told the crowd, repeating accusations that Putin, still unrivalled in popularity by any opposition figure, had ‘stolen’ March presidential elections by fraud.
On Monday, police searched the homes of several opposition leaders and summoned them for questioning an hour before Tuesday’s march, a tactic Kremlin critics said smacked of the days of Soviet dictator Josef Stalin.
Putin, 59, who built wide popularity by restoring strong central rule in Russia from the chaos of the immediate post-Soviet era, made no direct reference to the protest during a national day ceremony in the Kremlin. But he said those who rocked the boat were out to undermine Russia.
“For us, anything that weakens the country or divides society is unacceptable,” he said. “Any decisions and steps that can cause social and economic shocks are impermissible.”
The web sites of at least two media outlets critical of the Kremlin, including a television station trying to stream the demonstration live, were taken down in actions reminiscent of December parliamentary election that critics say were, like the later presidential poll, rigged.
Police, who had beaten protesters at a rally on May 6, the eve of Putin’s inauguration, stood along the route of Tuesday’s march. Helmeted riot units lined one short stretch, but the security was lighter than at previous protests dating back to the December polls and no arrests were reported.
However, the arm of the judiciary was on display, albeit subtly.
At one point in the rally, a police officer mounted the protest stage and discreetly handed summonses to Nemtsov and leftist leader Sergei Udaltsov to report for questioning by federal investigators.
One of the weaknesses of Russia’s opposition is its failure to produce a clear popular leader. K senia Sobchak, a socialite who has become a Putin critic despite her late father’s close ties to the president, is perhaps one of the best known through appearances on television and in the pages of glossy magazines.
“I never thought we would return to such repression in this country,” she said on Twitter after police searched her home on Monday, e n tering a t 8 a.m. and seizing what they said was more than 1 million euros in cash.
Sobchak, anti-corruption blogger Alexei Navalny and another opposition leader, Ilya Yashin, were questioned for hours on Tuesday by federal investigators as witnesses in a criminal case over violence at the rally on the eve of Putin’s inauguration.
After his questioning, Navalny was taken to an office he uses by police who spent several more hours searching there. Nemtsov’s home was searched by investigators after the rally.
Yashin, who came to the protest after, he said, refusing to answer all 56 questions investigators posed to him in a six-hour session, said he was summoned to return on Friday. Ud altsov was told to report to the Investigative Committee on Wednesday.
‘DENIAL OF SERVICE’
A spokeswoman for internet-satellite TV channel Dozhd (Rain), which was broadcasting live from the rally, s aid its site faced a “denial of service” attack by unidentified hackers, and the Novaya Gazeta newspaper’s site was inaccessible.
“We have got used to things like this – it seems every time there is a mass demonstration against the government our site is taken down,” No vaya Gazeta de puty editor Vitaly Yaroshevsky said. “The hackers play to the benefit of the authorities.”
The site of liberal Ekho Moskvy radio, was inaccessible intermittently, including during an interview with Sobchak.
Udaltsov ignored the summons he was issued when investigators entered his apartment o n Monday a nd led a group of marchers carrying red flags and chanting “Putin to jail!” and “All power to the people!”
“More than 100,000 people have come out today in a rebuke to this repression,” Udaltsov told the crowd from a stage where speakers denounced Putin. “This is our answer to the crooks and thieves – we are not afraid.”
Police put the crowd size at less than 20,000 but that was clearly far below the real number, which opposition lawmaker Ilya Ponomaryov estimated at more than 70,000.
Authorities gave permission for Tuesday’s rally and many demonstrators said they would not let the new protest law, under which they could face crippling fines if order is deemed to have been violated, keep them at home. The law passed despite reservations expressed by constitutional advisers.
RED TOOTHED WALLS
“Those who fought are beyond being scared,” said Valery Zagovny, 50, who served for the Soviet army in Afghanistan and was wearing the medals to prove it. “Let those behind the red-toothed walls of the Kremlin be scared.”
Putin initially tolerated the protests, which began in December after a disputed parliamentary election. He has taken a tougher line since returning to the Kremlin after four years as premier, a post he took on to remain Russia’s paramount leader because of constitutional term limits.
His promises of stability finds deep support among the elderly and many outside the cities, as have his strong measures against the protesters, accused by some of his backers of being spoilt urbanites financed by foreign powers.
But opposition leaders say Putin’s heavy-handed tactics show that he is worried by the protests that have undermined his once iron-clad authority.
Many protesters are middle-class city dwellers who have benefited from the oil-fuelled boom Russia has experienced during Putin’s years in power but want more of a say in politics and fear his prolonged rule will bring economic stagnation.  DM

Photo: Participants attend an anti-government protest in Moscow June 12, 2012. Thousands of Russians chanted “Russia will be free” in a march through Moscow on Tuesday to protest against President Vladimir Putin, shrugging off his tough new tactics intended to quash any challenge to his rule. REUTERS/Tatyana Makeyeva