Shlain on the job: Life before – and after – creating the Webbys 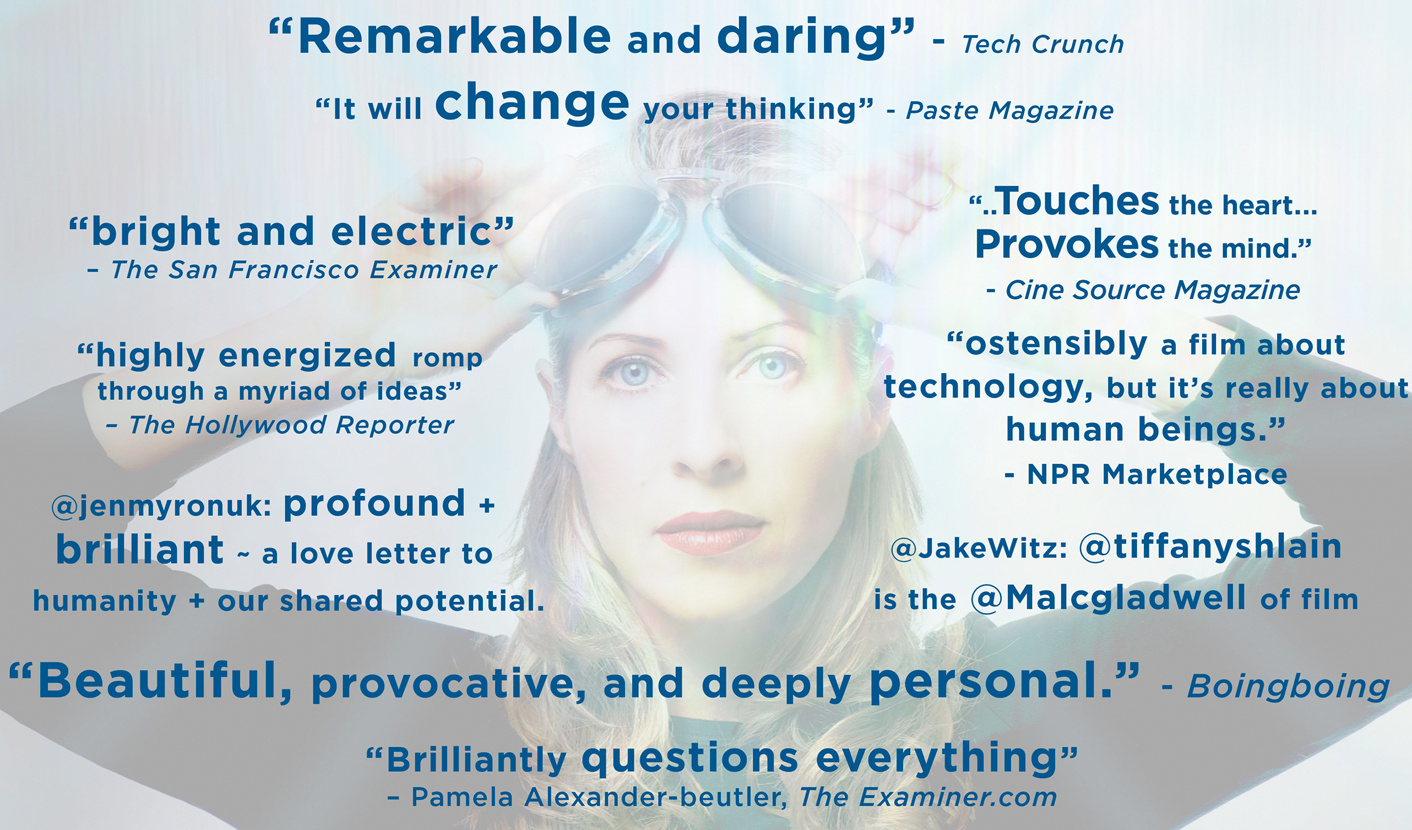 Tiffany Shlain, best known for creating the “Webbys” – the internet’s answer to the Oscars – is in town. REBECCA DAVIS spoke to her about filmmaking, the internet, and the fact that, for better or worse, we’re growing ever more interconnected as a species.

Tiffany Shlain is an internet evangelist. It comes through in everything she says. She is a true believer in the internet as a force for good, a force for social progress, a force for creativity, a force, even, for making us simply better as members of the human race. It’s uplifting stuff, though I’m tempted to ask her if she’s been on any News24 comment boards lately.

Shlain’s investment in these ideas came early. As an 18-year-old, in 1987, she co-authored a proposal with an Iranian friend calling for the founding of an organisation called UNITAS, Uniting Nations in Telecommunications & Software. On the back of this, she was invited to discuss these ideas as a student ambassador to the Soviet Union, where she sketched out her ideas about how computers might be able to be used to “link us together”. It wasn’t until 1994, when she was working on a CD-Rom for the musician Sting, that a friend told her she should really check out something called the internet.

“I looked at it and said: this is going to change everything,” Shlain says now.

This is not to say that she doesn’t acknowledge that many of us are ridiculously over-dependent on technology. Her documentary, Connected, opens with her admission that at a recent lunch with an old friend, she found herself making an excuse to go to the toilet in order to check her phone – despite the fact that she was experiencing the lunch as highly enjoyable and engrossing. It was at that moment, she says, that she realised she was just a little too “connected”.

Now Shlain and her family engage in weekly “technology Shabbats”, where they completely unplug from all devices from Friday evening until Saturday evening. She says this allows her to focus more completely on quality family time, although she adds that it also means that she falls on her devices with renewed enthusiasm come Saturday night.

Shlain has an impressive CV. She’s worked as a tech consultant (to, among others, Hillary Clinton), an internet activist, an artist and a filmmaker. Newsweek listed her as “one of the women shaping the 21st century”. She is still probably best known for having founded the Webby Awards, though in an interview setting she seems keen to focus more on her recent filmmaking activities. Shlain ran the Webbys from 1996 to 2004, a period she now describes as a “crazy time”.

She built the awards into the undisputed barometer of website excellence, and the Webbys have since also attracted a cult following for the fact that the recipients of the awards are permitted to give acceptance speeches consisting of only five words. When satirical website The Onion won the Humour category in 2009, they went with: “Free all attractive political prisoners”. Al Gore, taking home a lifetime achievement award in 2005, used his five words for a political joke: “Please don’t recount this vote”.

These days, however, Shlain is all about the filmmaking – or, more precisely, “the intersection of film combined with the web for social change”. She is pioneering a kind of collaborative filmmaking she calls “cloud filmmaking”, where people from all over the world are invited to send her images and video material, which she then edits together into a film. Shlain wants to make 15 collaborative cloud films over the next four years, which will each tackle different aspects of what it means to be human – money, power, happiness, greed, death, love and so on. These will form the basis for her next feature film.

Does working in that collaborative way present any problems to do with authorship or copyright? “The cloud films are non profit. We credit everyone involved on our site – we’re into the part about how everyone made it with us. One of the things I love about humans is that they want to make things together,” she says.

The idea of cloud filmmaking grew out of the film that brought Shlain to South Africa – Connected: An Autoblogography About Love, Death & Technology, which is currently showing at the Encounters documentary festival. The film ends with a clarion call to humanity to “stop declaring our independence and start declaring our interdependence”, an exhortation which states the theme of the film pretty well.

In the course of the film, she suggests that the internet may be “rewiring our brains to think interdependently”, in terms of allowing us to see and make connections we might never have before. Shlain believes that our internet use is serving to synthesise our left and right brain hemispheres in an unprecedented way – an idea premised on the notion that the left hemisphere is responsible for more logical functions and the right hemisphere for more creative thinking.

While there is certainly evidence for the lateralisation of brain function, it’s likely not quite as concrete or clear-cut as Shlain makes out. In her thinking on these issues she draws on the work of her father, surgeon Leonard Shlain, who authored a number of best-selling books about the brain, art and science. In The Alphabet Versus the Goddess, the work which his daughter seems predominantly to lean on, Shlain senior advances the theory that “the process of learning alphabetic literacy rewired the human brain, with profound consequences for culture”.

When the alphabet was developed in ancient societies, Shlain posits, this “reinforced the brain’s linear, abstract, predominantly masculine left hemisphere at the expense of the holistic, iconic feminine right one. This shift upset the balance between men and women, initiating the disappearance of goddesses, the abhorrence of images, and, in literacy’s early stages, the decline of women’s political status. Patriarchy and misogyny followed.”

That blurb makes the book sound crazier than it actually is, in fairness. While its thesis is certainly pretty out-there, it’s a thoroughly good read. The fact was, however, that Leonard Shlain was not a neurologist, or an anthropologist, or really anything that would have technically qualified him to make these claims – he was an interested (and interesting) amateur in these fields. The Guardian described his book as “barking” (as in “barking mad”) although they did note that it contained “infrequent acute insights”.

As a basis on which to build a whole theory about internet brain re-wiring, then, Shlain’s father’s theories about brain hemispheres may not be the most solid of foundations. And indeed, Tiffany Shlain’s belief that the internet is re-wiring our brains for the better is certainly open to question. In Nicholas Carr’s The Shallows (2010), for instance, Carr argues the exact opposite – that prolonged internet usage is “remapping the neural circuitry” of the brain to, in essence, make us stupider; less capable of immersing ourselves in a lengthy article, for instance. Carr’s book has in turn been debunked – but the point certainly seems to be that nobody can be quite sure, at this early stage, exactly what the internet is doing to our brains.

Shlain says she has read The Shallows, and she’s happy to admit that she now consumes information in a more ADD way than previously. “I used to be a voracious reader, and I don’t read in that way any more. I have ten books by my bed that I’ll kinda dip into now instead. But actually we’re all reading more than ever now, we’re just doing it online,” she says. “Also, these days, I’m all about the idea. Most 300-page books could be 20 pages long.”

This is a sentiment that comes through clearly in Connected, which leaps with dizzying rapidity from one idea to the next in a way that ultimately feels scattergun and un-focused – in fact, precisely like someone consuming small sound bites of information all over the internet. From this perspective, Shlain’s own film may be the best illustration of the way in which the internet is re-wiring our brains.

Considering she is a self-confessed web addict, what are Shlain’s favourite websites? Pinterest and Twitter, she says. Pinterest appeals to her as a visual person – “I do this all the time anyway. If you go to my studio I have pictures and ideas stuck up everywhere”. She’s also a big Facebook fan. “As a filmmaker, the fact that I can have an ongoing Q&A on there – I feel very connected through it. People I’ve never met, who have seen my films, they’re on there, and we’re having interesting relationships.” She says one of her upcoming short films is a parody called The Friendship, which addresses the question of what the world will be like when everybody is Facebook friends.

Her film may be satirical, but there’s a sense that Shlain does expect this outcome – total interconnectedness – to be forthcoming sooner rather than later. She says she believes that within seven to 10 years, everyone in the world will be online.

I tell her that in South Africa, the latest figures relating to internet access, released by Arthur Goldstuck’s World Wide Worx in May, confirmed 8,5 million South African internet users at the end of 2011. That’s an impressive growth of 25% in a year, but it still amounts to only about 17% of the total population of the country. How do we go about getting more people online, in the face of structural poverty?

“I’m part of an organisation called A Human Right, which holds that participation in the information society should be a human right,” she says. “There’s all this unused bandwidth available that we’re trying to get access to. So I’m pretty involved in how to solve that problem.” She believes the internet holds unprecedented power to solve social problems, owing to the fact that governments can’t hope ever to control it completely.

At one point Shlain says that she’s “not Pollyanna” in her thinking about the internet. Despite this profession, her vision of what the interconnected 21st century is going to look like does seem distinctly Utopian. “I just believe in humanity, and that openness will win,” she sums up.

Tiffany Shlain’s Connected is currently showing at the Encounters Festival