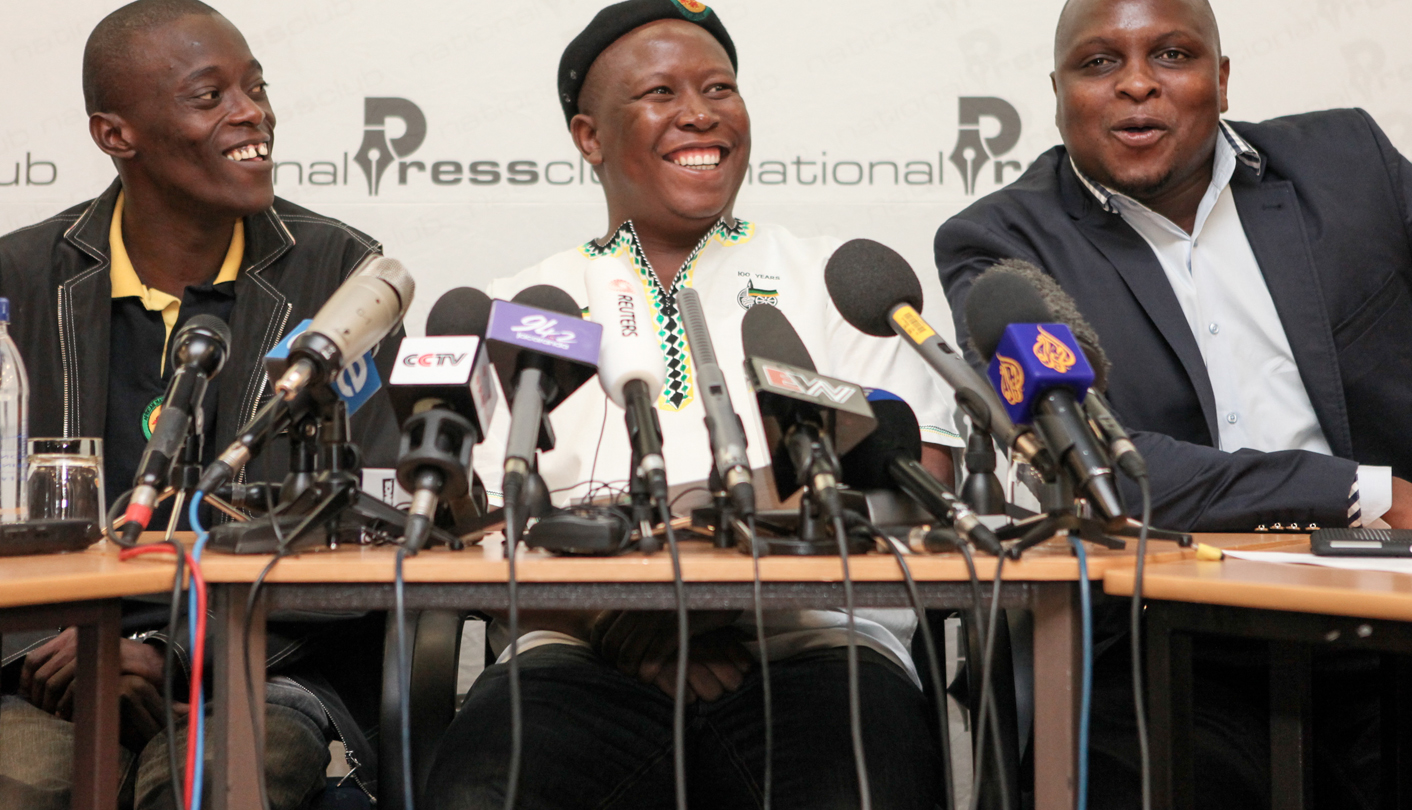 The ANC Youth League has always relished its role as the most radical element of the ANC. Now it faces something of an existential crisis after its wings were severely clipped by the mother body: how radical can it be, knowing that its leader, Julius Malema, and his closest allies were flung out? The ANC policy conference will be a good opportunity for the league to test the waters once more. By SIPHO HLONGWANE.

The ANC Youth League faces its biggest existential crisis in 20 years. For the first time in a very long time, it has to take a long, hard look inward to explain why it exists at all. Since the days when a certain Nelson Mandela and his pal Walter Sisulu ran it, the league has been the vanguard of all the pent-up rage in the party.

It has pushed the envelope on certain topics with far greater alacrity than the leaders of the ANC – who sometimes need to be diplomatic and circumspect of differing views – might have. Many times, it has been the radical nature of the youth league that has prompted the ANC to take on a more urgent stance on certain issues. The league likes to remind everyone of this.

However, under the leadership of Julius Malema, the league turned on its parent. It started to point its sulphuric rhetoric at the ANC, and the Luthuli House leadership eventually grew anxious. It took two years, but in the end Malema and his close allies Sindiso Magaqa and Floyd Shivambu were tossed out of the organisation.

But because Malema took on the ANC in the name of the league, and lost badly, it has tainted the entire organisation. No league member will feel that they are safe from the grasp of the ANC’s disciplinary committees. And since some of the charges that were levelled at the league leadership seemed politically motivated and cynical, the idea that the mother body will overstep its authority to have its own way has also been planted.

The question is, where does this leave the league as far as its independence and radicalism is concerned?

The league itself seemed to anticipate this problem long before Malema’s future was finalised, and began banging on the autonomy drum. The issue was only tested at the Malema trial, and the ANC ruled that it had full disciplinary jurisdiction over it. Just to make sure that the league got the message about any of them being vulnerable, it promised to investigate the tampering of its constitution. That could have ramifications for the league’s entire national executive committee. If it feels like it has been castrated, it is not without reason.

Still, the ANCYL has not given up on its radical stance just yet. It has a wonderful opportunity to reassert itself via two vehicles: the ANC cannot actually force it to elect a new president (and the leaders enjoy calling Malema ‘the commander-in-chief of the economic freedom fighters’ – quite a mouthful, but one that amounts to a raspberry blown in Luthuli House’s general direction), and it would be extremely dictatorial of the ANC to punish the league for lobbying for a certain policy. So there is a little bit of wiggle room.

As far the election of a new president is concerned, the league’s national executive committee is in no hurry to replace Malema. There was a movement within the league to do so, but it was quickly defeated and the leader of that movement, the former treasurer Pule Mabe, was sacked. The NEC will call a national general council soon, but the point of it will be to get the whole Youth League to agree with whatever stance it takes to the ANC’s national congress in December to ensure that the singling out of anyone for punishment will be difficult.

It is at the ANC’s policy conference where things will get interesting. Remember we spoke about the League’s job being radicalism? This is a perfect opportunity for it to regain the face it lost with the Malema debacle without inviting punishment from the very top.

It is now the job of deputy president Ronald Lamola to test the waters. He has roped in deputy secretary-general Kenetswe Mosenogi, spokeswoman Magdalene Moonsamy, national working committee member Abner Mosaase and communications convenor Khusela Sangoni to be the public faces of this new front.

Over the weekend, they prepared the policy positions for the end-of-month policy conference. To be blunt, there is absolutely nothing new about it. It wants expropriation of land without compensation. It thinks that vast swathes of the minerals and energy sector should be nationalised.

“It is our understanding that economic freedom in our lifetime will and must characterize this period of radical transformation. The national democratic revolution, particularly the resolution of the national and class questions, continues to drive our outlook,” the league says in its policy documents.

“Now is the time for the ANC to return to these fundamental questions and move away from the permanent detours that were taken during the Codesa negotiations. Accordingly, the ANCYL maintains that 1994 was a political breakthrough and its attainment has not yet delivered the freedom that we envisaged – freedom whose content should have been both political and economic,” it says.

This is the sort of talk that would perhaps get a few foreign correspondents excited (because the ANC would dutifully file the ANCYL’s contributions alongside all the others for discussion), and perhaps cause our minerals and energy minister to remind wary investors overseas that nationalisation is not government policy. But other than that, the ANC has managed to largely ignore the league.

You would think it would be even easier to shush the league now that Malema is gone. But don’t be so certain of that. Lamola is really warming to his role as the new chief rabble-rouser. On Tuesday, he was on fire. After some gentle probing from the press on the land redistribution question, he finally relented and let white land owners have it with both barrels. He blames the slow pace of land redistribution on “unpatriotic whites”.

“There must be willingness from white people to volunteer land,” Lamola said. “Why must we always fight against these people when we want to expropriate land? Willing-buyer,willing-seller has failed for this reason. In China, if a certain piece of land is needed to build a hospital or a school, the government expropriates it without compensation (because) it is in the national interest (to do so). Yes, I also think that government must step up its redistribution programme, but the problem is with unpatriotic whites who don’t want to volunteer land.”

Lamola also took a vague stab at ANC president Jacob Zuma. “The ANC Youth League is going to influence the policy conference and the national congress. Change is inevitable at Mangaung. We want leaders who will implement these radical policies. Leaders who are at national level must know that they don’t lead a ward, or a tribe. They must lead for everyone.”

And just in case you missed the message on the ANCYL being determined to be as radical as ever, Lamola took a swipe at the government’s dithering over the vastly controversial former crime intelligence boss Richard Mdluli. Lamola said: “Mr Mdluli must go. He has created an environment of paranoia. He’s one of these apartheid police. You can see the genes of Eugene de Kock run through him.”

Right. Let’s see how impressed the ANC will be by all this posturing. If the lessons of the Malema years are anything to go by, Lamola will not have as much rope as his former boss once had. DM

Photo: Yeah, we didn’t manage to take any photos at the presser. Anyway, it was very much like Malema and lieutenants were there. (Jordi Matas)