Calligraffiti: eL Seed of an idea

Calligraffiti: eL Seed of an idea 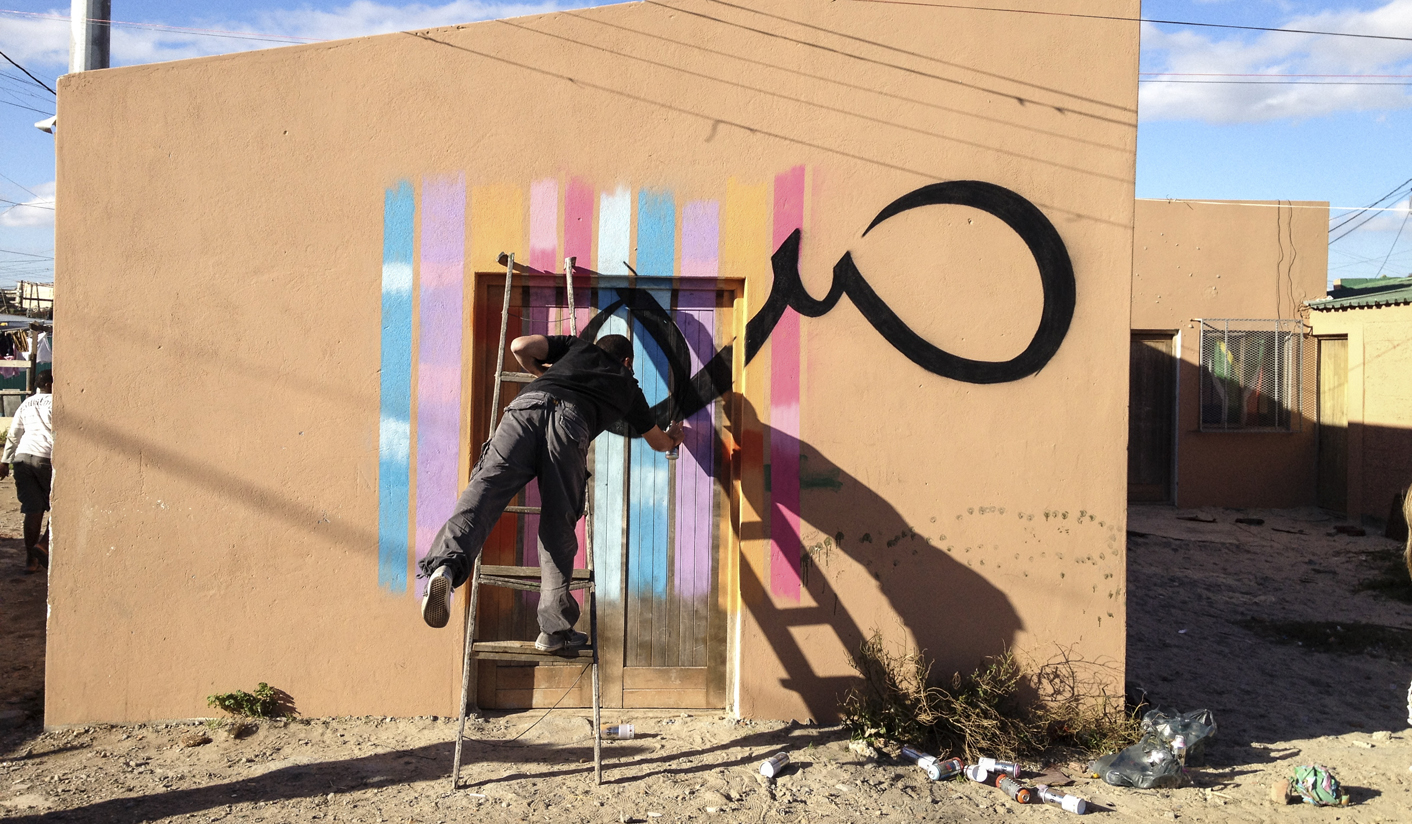 One of the Arab Spring’s manifestations was radical new graffiti that appeared on walls from Tunisia to Yemen, and one of the street artists whose work has made an impact in this tumultuous battle for ideas is eL Seed. GREG MARINOVICH spent a day with him between Cape Town and the Cape Flats.

eL Seed’s work has appeared in museums and collections throughout the world. Born in France of Tunisian parents, he began doing graffiti in 1998, using the Latin alphabet, the only one with which he was familiar. As with many immigrants, he was preoccupied with assimilating into (French) society, and the only Arabic he was familiar with was a Tunisian dialect he spoke with his parents, but he never learnt to read or write his mother tongue.

In the aftermath of 9/11 and the wars of Iraq and Afghanistan, there was a great questioning of culture, origin and the nature of Arab society, especially for those living in the West. eL Seed decided to learn classic written Arabic, and then wanted to learn Arabic calligraphy under one of the masters.

That did not work out too well because calligraphy has extremely strict rules about form, and the young graffiti artist would not be bound by them: the fluid beauty of Arabic drew him to experiment and play with fonts and styles.

It is easy to understand his conservative teachers’ annoyance – Arabic script is sublimely beautiful without further adornment, yet eL Seed wanted to invoke a message through style as well as content. He developed his own style, which he calls calligraffiti.

His soaring, elegant works range from a stylised calligraphy to very modern incarnations of an ancient text. All contain messages that are important to their geography and their political context.

Invited to show his work and speak at the Open Forum’s “Money, Sex & Power” conference, eL Seed spoke about making street art and graffiti in public spaces that encouraged the Arab Spring, which began in Tunisia.

In Cape Town, a group of graffiti aficionados happened to have been contacted by a mosque with connections to Tunis to take eL Seed around the city a bit. Rizqua Barnes was approached by the imam and when she was asked to take a guy called eL Seed around, she was delirious – she had been following his work throughout his career. Soon they were heading into the bewildering sameness of the Cape Flats, to “the ghetto” as eL Seed described his destination.

Philippi is certainly the ghetto. We stopped outside a mosque constructed primarily of prefabricated concrete fencing, the “stop nonsense” in shack-dwellers’ slang. That green painted wall itself had graffiti on it. Walking through the maze of corrugated and wood shelters, under a matrix of illegal electricity connections, eL Seed came to a dull olive- green building that the imam had okayed for him to paint.

eL Seed likes to work with local community members who show an interest, as in Tunisia, where he felt art for the revolution should be a community effort, and he had lots of willing hands. But besides a few curious kids, only one man wanted to participate.

The graffito that eL-Seed had devised “for the slum, must be appropriate to the place”. He chose a quote from Nelson Mandela “It is impossible, until it is done.” He translated this into Arabic and then began a process of transforming it into his stylised calligraffiti.

As with most of his work, he hopes to encourage, challenge and inspire viewers for the future. eL Seed does not sign his work any longer. “It is narcissistic,” he says. Nor does he provide a translation of the work: he prefers that the message be passed on by word of mouth. He also feels that a translation would draw the viewer’s eye, and not let the beauty and form of the calligraphy, of the graffito, speak to the soul. DM

eL-Seed’s work may be seen online here, and in a book featuring contemporary graffiti artists from across the Arab world Arabic Graffiti.

All photos by Greg Marinovich