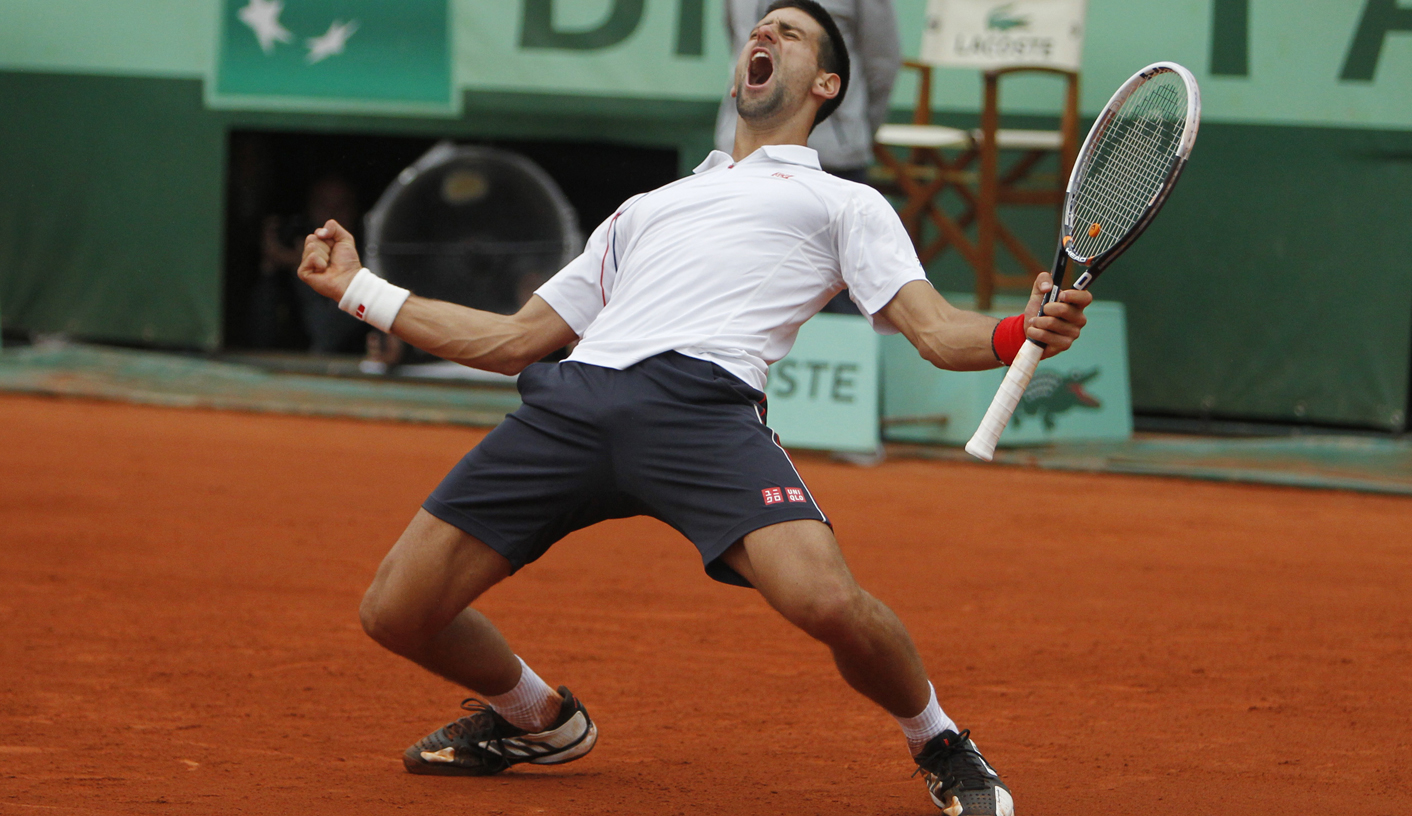 Novak Djokovic came within one false step of losing his chance to hold all four grand slam titles as he saved not one, not two, not three but four match points before downing Jo-Wilfried Tsonga 6-1 5-7 5-7 7-6 6-1 in the French Open quarter-finals on Tuesday. By Julien Pretot (Reuters)

Serbian world number one Djokovic, looking to become the first man in 43 years to win the four majors consecutively, kept cool under tremendous pressure to save the match points on his serve in the fourth set, forcing a tiebreak he won 8-6 before breaking decisively early in the fifth.

Djokovic, who will join American Don Budge and Australian Rod Laver as the only men to have held all four major titles at once if he lifts the Musketeers Cup, will now take on third seed Roger Federer in a re-match of last year’s epic semi-final won by the Swiss.

“Unfortunately there had to be a winner and a loser,” Djokovic, who applauded Tsonga as the distraught Frenchman left Court Philippe Chatrier, told a courtside interviewer.

“He was the better player for most of the match. I was fortunate to come back from four match points. I don’t know how I came back from that.”

Tsonga, who was playing in his first French Open quarter-final, had pledged to fight and he duly delivered, only after being caught cold by a brilliant Djokovic.

A red-faced Tsonga ended an 11-point streak by Djokovic in the third game of the second set before eventually finding his stride to stay in the match.

He broke back in the eighth game when Djokovic netted a backhand and, spurred on by a loud crowd, the Frenchman started to pound the ball to all corners of the court to bag the second set on Djokovic’s serve when the Serbian misfired a forehand.

The world number one, however, continued to force Tsonga to hit the extra shot and broke for 2-1, only for his opponent to break straight back as Djokovic looked up to his box with a disbelieving look on his face.

Another netted backhand earned Tsonga a set point and he had the hollering fans leaping out of their seats when he hit a running crosscourt forehand winner to go two-sets-to-one up.

Tsonga roared, too, his fists clenched, staring at the clay for a few seconds.

The 2008 Australian Open runner-up came a step closer in the fourth set when a Djokovic forehand clipped the net and bounced out to earn the Frenchman two match points at 5-4.

Djokovic saved the first one with a volley and on the second one, he stepped into the court to follow up on a big first serve to fire a forehand winner.

There was more to come.

At 6-5, Tsonga had two further match points. He netted a forehand on the first one while Djokovic outplayed him on the second to finish off the exchange with a smash.

The Serbian went 4-2 down in the resulting tiebreak but once again kept his composure to take it 8-6 and, as Tsonga ran out of steam, opened a 3-0 lead in the decider.

Djokovic ended the contest after four hours and nine minutes with a backhand winner down the line.

“As I said before the match I gave everything,” Tsonga told a courtside interviewer.

“I would have loved to win this match but I had nothing left in my legs, I’m sorry for that,” he added with a stifled sob.

For Djokovic, who had also played five sets to see off Italian Andreas Seppi in the fourth round, the toughest part is yet to come as he will take on Federer before a potential final against the ultimate claycourt machine, six-times Roland Garros champion Rafael Nadal.

“The good thing is that we both have two days off to rest,” he said, referring to Federer’s five-set victory against Argentine Juan Martin del Potro in the day’s other quarter-final.

“And I hope to have another great match like we had in 2011. It’s always a big challenge to play Roger.” DM

Photo: Novak Djokovic of Serbia reacts after winning his quarter-final match against Jo-Wilfried Tsonga of France at the French Open tennis tournament at the Roland Garros stadium in Paris June 5, 2012. REUTERS/Nir Elias