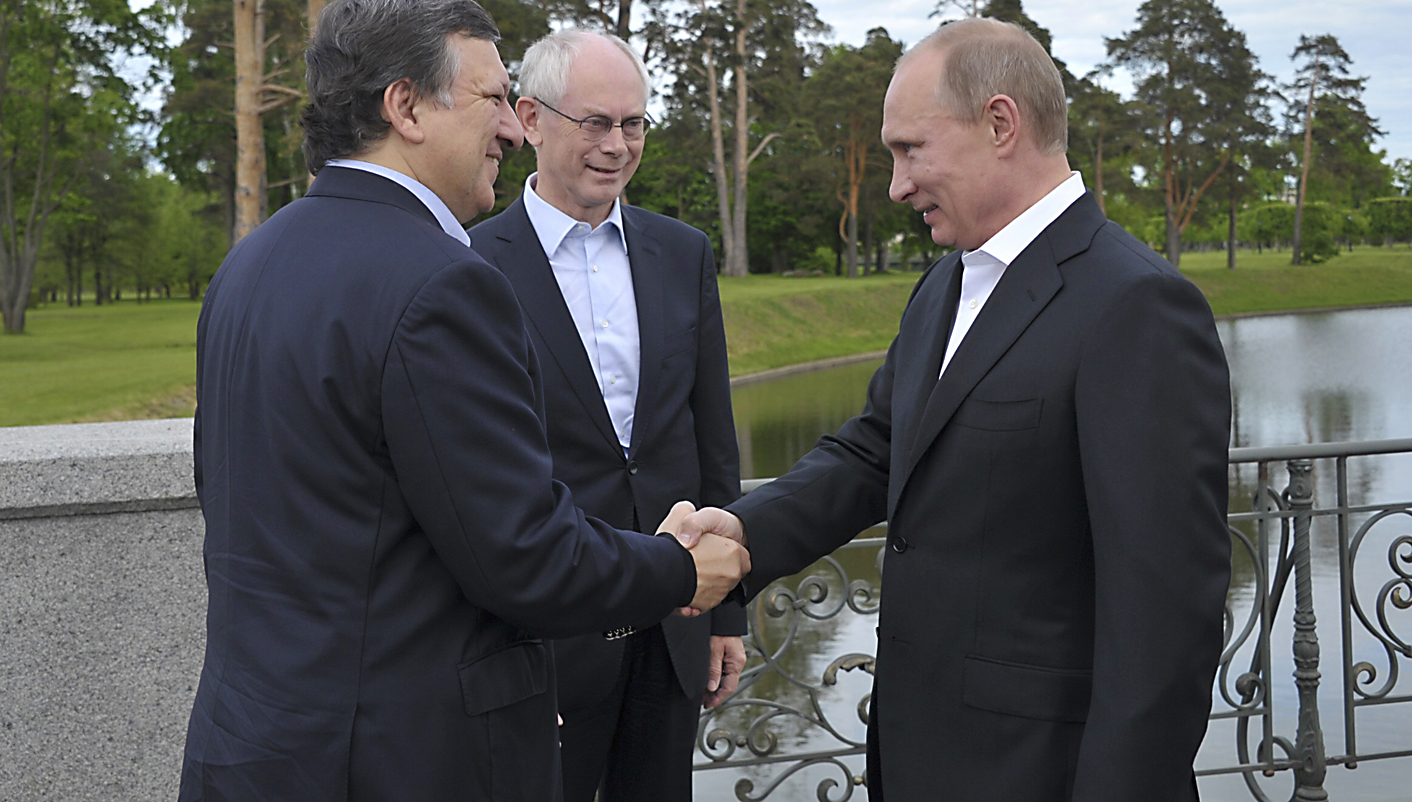 Russian President Vladimir Putin pressed the European Union on Monday for faster progress toward visa-free travel and said the EU will have to deal with an economic alliance among ex-Soviet states, while skirting the issue of Syria in public comments. By Denis Dyomkin (Reuters)

At his first summit with EU leaders since his return to the Kremlin last month following the biggest opposition protests of his 12-year rule, Putin also made clear he would not welcome Western criticism on human rights or democracy.
He signalled support for legislation meant to discourage street protests by increasing fines for violations and defended the jailing of former oil tycoon Mikhail Khodorkovsky, for many a symbol of Putin’s treatment of his foes.
Putin sought to assure sceptical EU leaders he is determined to seek closer ties with Russia’s biggest trade partner, calling for robust movement toward an elusive new pact governing ties between wary neighbours that share a continent.
“We have a good opportunity to set out our strategic goals in this document and lay out a long-term plan for cooperation,” he said at the talks in the ornate imperial-era Constantine Palace on the outskirts of his home town, St. Petersburg.
But he called for a “pragmatic, businesslike approach without any ideological or other stereotypes”, a veiled demand that the EU treat Russia as an equal and steer clear of preaching to it on issues such as human rights.
The summit was clouded by the crisis in Syria, where Moscow has blunted Western efforts to condemn President Bashar al-Assad and push him from power during 15 months of bloodshed in which his forces have killed more than 9,000 people.
Putin said he had discussed Syria with the EU leaders but made no further comment.
Russia and the EU are deeply intertwined, with Europe relying heavily on Russian energy exports and Russians hungry for EU products. But they wrangle over issues ranging from energy supplies, trade and market access to human rights, all of which complicate efforts to agree a new framework pact.
Putin tried to blunt years of criticism over Khodorkovsky, once Russia’s richest man, who was jailed in 2003 and is due for release in 2016 after two convictions for financial crimes in trials Kremlin foes said were punishment for perceived challenges to Putin.
“Wherever I go, there is always one primary question being raised – about Mr. Khodorkovsky’s fate,” Putin told a joint news conference with European Council President Herman Van Rompuy and European Commission President Jose Manuel Barroso.
“The European Court of Human Rights said the criminal case against Khodorkovsky and conviction was not politically motivated,” Putin said, referring to a May 2011 ruling in which the court said it found no firm proof the first case against the former Yukos oil company chief was politically motivated.
Putin has faced Western criticism over police violence against protesters on the eve of his inauguration and the mostly brief detention of hundreds of people trying to demonstrate in the following weeks. He suggested Russia was more lenient toward demonstrators than EU nations.
Russia must “bring into our legislation such norms as are applied in many European countries to regulate such activities” Putin said of legislation to increase fines for protest organisers and demonstrators deemed to have violated city rules.
Van Rompuy prodded Putin diplomatically on democracy and human rights, suggesting a looser grip would help the 59-year-old leader develop his own country and forge closer EU ties.
Recent Russian parliament hearings on human rights were “a recognition that human rights … are a matter of direct concern, and that is why these issues, together with the rule of law and preservation of political rights, do need to be addressed,” he said.
“Greater engagement of civil society opens opportunities for the further development of political institutions and pluralism in Russia which should not be missed,” Van Rompuy said. “Civil society was a force of progress in our own history and it can be one in yours, in Russia’s.”
Putin, keen to shed an image of Russia as an unwelcome neighbour, seemed more interested in swifter progress toward visa-free travel, saying that “a true partnership is impossible when there is a visa barrier.”
“Fears of a wave of labour migrants from Russia seem strongly exaggerated to me. The same goes for criminal elements,” he said. “I hope we will move along this path faster.”
Putin also reiterated Russian criticism of EU regulations designed to liberalise its gas market by barring suppliers including Russian giant Gazprom from controlling transit pipelines.
The criticism over market access cuts both ways.
Russia is set to join the World Trade Organization this year, binding it to global rules, but the EU wants the Kremlin to lower barriers for Western companies and investment by curbing corruption and improving the rule of law.
Putin returned to the presidency pledging to make closer integration among former Soviet republics a chief priority, and he emphasised that effort by travelling to Uzbekistan, an authoritarian Central Asian state, after the summit.
After talks with Uzbek President Islam Karimov, Putin brought up Moscow’s need for strong ties with Tashkent in light of the 2014 pullout of ISAF forces from Afghanistan, which borders Uzbekistan.
“Our cooperation with Uzbekistan, especially in the light of the future troop withdrawal from Afghanistan, has a very serious significance. It has a direct link to the security of the Russian Federation.”
Any instability in Afghanistan after the troop pullout would affect the countries of predominantly Muslim central Asia, which have porous borders and largely secular leaders. DM