Witch-hunts: The darkness that won’t go away 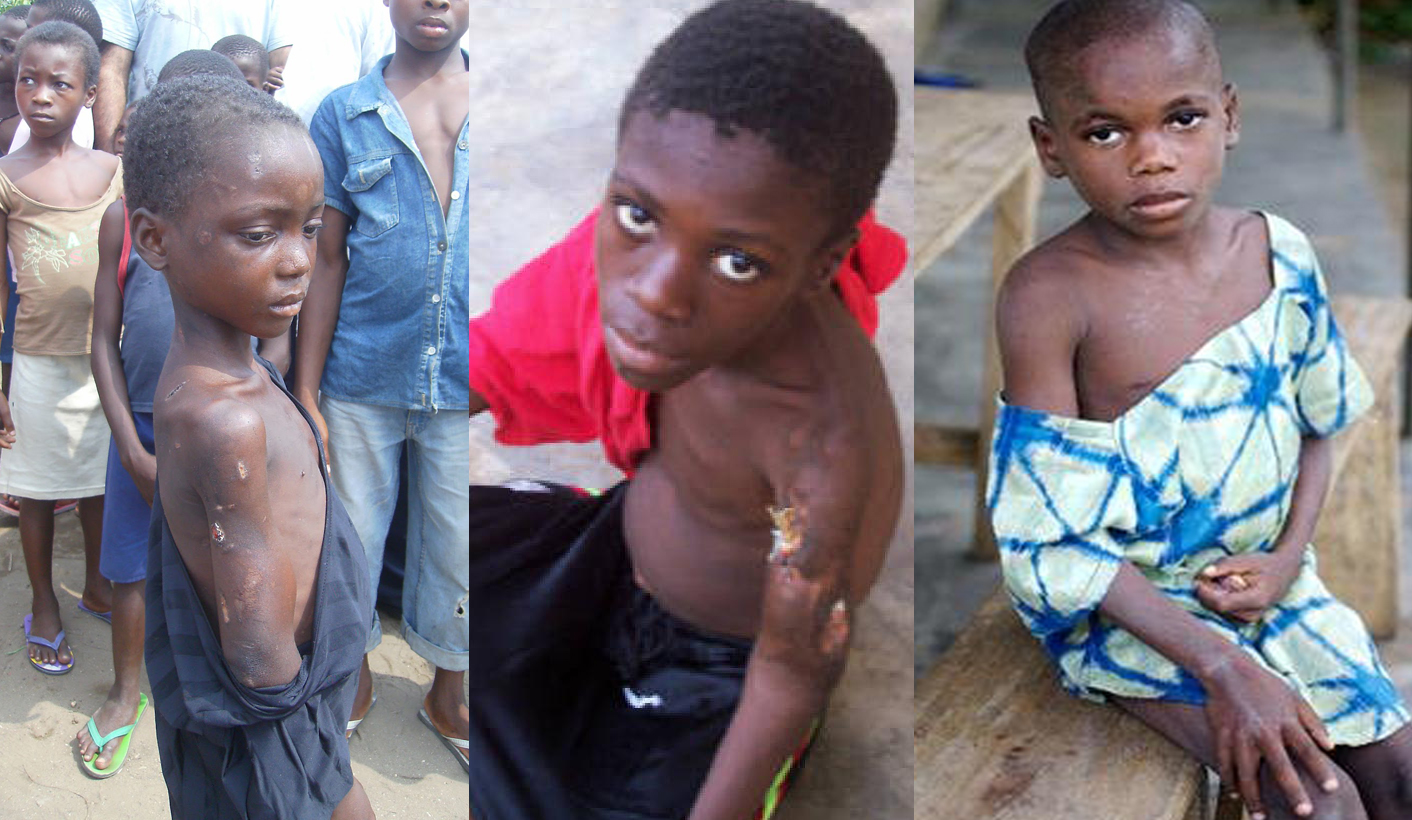 It is a poison that annihilates relationships, breaks down family bonds and destroys communities. Despite the social damage, witch-hunts are still commonplace in Nigeria, Ghana, Tanzania and here in South Africa. MANDY DE WAAL speaks to Nigerian humanist and witchcraft researcher, Leo Igwe, and explores Africa's witchscape.

Esther was still a child when her mother died. Barely five years old. Born in the southern region of Nigeria, Esther’s home state of Akwa Ibom is often referred to as “the Land of Promise”. But this divinely inspired moniker has a darker side. In this world death, illness and accidents aren’t perceived as random and unforeseen events.

On the contrary, instead of ascribing misfortune to a factual root cause or circumstance, personal adversity is often attributed to witchcraft. An illness can said to be instigated by the curse of a neighbour or, more tragically, a death in the family could be blamed on a young child.

“Witchcraft accusation is a poison: the minute it gets into a family, the family bond breaks down. Automatically it contaminates relationships no matter how strong they are. It automatically turns a child into an enemy. Not just an ordinary enemy, an enemy of the most vicious kind,” says Leo Igwe, a Nigerian sceptic who is the founder of the Nigerian Humanist Movement. At the beginning of this year Igwe started a three-year research programme on “Witchcraft accusations in Africa” at the University of Bayreuth, in Germany.

“I rescued (Esther) twice when she was about five years old, after she was accused of killing her mother. She was driven out and went to live in the local market,” says Igwe, speaking to Daily Maverick from Germany.

Igwe says children who are accused of being witches by their families are often chased out of their homes. These abandoned children can fall prey to child trafficking and abuse. Other children and infants charged with sorcery are tortured or even murdered.

Nigeria is a country divided by religion. The north is dominated by Islam while the south consists of Protestants, Catholics and other syncretic theists who meld old superstitions and mythologies with Christianity.

Since the 1970s the oil-rich African country has experienced an upsurge in Pentecostal religiosity, a more charismatic branch of Christianity that has colonised much of Akwa Ibom. This has given birth to a radical evangelism where “faith healers” identify and cure people thought to be bedevilled by demonic possession.

“In Nigeria, a faith in witchcraft has existed for centuries. The cause in part is a lack of common sense,” says Igwe, adding that centuries ago people lived close to Mother Nature and saw the natural environment as something controlled by spiritual forces.

“There is this belief that when something happens there is a spiritual entity behind it. It is believed that this spiritual realm can be manipulated by people who have spiritual powers. This is what lies behind the idea of witchcraft,” Igwe says. “If you get sick you don’t think you ate something that caused problems with your biological system. Instead you spiritualise the problem. You think that somebody somewhere is manipulating your physiology and that is why you are sick.” Nigeria isn’t the only African country plagued by the persecution of “witches”, a superstitious practice that wreaks suffering and harm on women and children in particular. The 2011 Human Rights Report prepared by Tanzanian NGO the Legal and Human Rights Centre states that “Between 2005 and 2011 around 3,000 people were lynched by frightened neighbours who thought they were witches. On average 500 people – particularly old women with red eyes – are killed every year in Tanzania because they are suspected of being witches.”

The rights group explains that people with red eyes are targeted because it is perceived to be a sign of being involved in witchcraft. Locals believe witchcraft is behind misfortunes like infertility, poverty, failure in business, famine and earthquakes.

Back in South Africa the victimisation of people identified as witches is an ongoing problem that frequently makes headlines. Earlier this month, two cousins were sentenced to a decade behind bars after murdering their 86-year-old grandmother in Grahamstown. The elderly woman was brutalised and killed by the pair after they suspected she was a witch.

Bulelani Latha, 29, sought advice from a local sangoma after there was a death in the family. The sangoma told Latha that he had been bewitched. Latha and his cousin believed that witch to be their grandmother, and attacked her. She died later in hospital. A post mortem revealed she suffered head wounds, a fractured skull, bleeding on the brain, fractured ribs and a lacerated liver.

Across the country, in Limpopo a 79-year-old man was burnt to death after his house was set alight in Giyani by an angry mob that accused him of practising witchcraft. Tarazeta Mathebula was inside the house when it was torched, but his 55-year-old sister-in-law managed to escape. As she did the mob assaulted her.

South Africa is governed by the Witchcraft Suppression Act of 1957, a law that (in part) makes it illegal to accuse someone of being a witch. However, the law does little, if anything, to discourage violence against people accused of being witches, particularly in rural areas where attacks prejudice women. The law further undermines the rights of people who practise paganism or self-identify as being witches.

A fact sheet on witch-hunts by Yaseen Ally of the SA Medical Research Council indicates that, in this country, accusers are more likely to be neighbours, members of the immediate community or family members.

A study of newspaper reports by the council revealed that witch-hunts were concentrated in rural areas, and that this predominated in communities in Limpopo, Mpumalanga and KwaZulu-Natal. The fact sheet indicates that economic elements can factor in witch-hunts when wealthier community members are targeted by others who want to use this means of ostracising and victimising people to gain their wealth.

“At the same time relatively poorer members are also accused of causing misfortune to others who lose their economic status in the community or believe they are supposed to be better off than they actually are,” writes Ally. “Relatively well-off persons may accuse poorer members of a community of practising witchcraft in an attempt to assume ownership of land, property or even livestock.”

Ally states witchcraft attacks are gender-based, with most witch-hunts directed at women. “Women who assume power positions, either financially or through a role that provides power, are more vulnerable to accusations of witchcraft from men and women,” writes Ally. “Witch hunting is thus essentially about gender-based control in that men assert and reassert their power and control over women’s independence, bodies, sexuality and individuality.”

Witchcraft researcher Igwe explains that the underlying causes of a belief in witchcraft are complex and can’t simply be ascribed to just one issue. He says in Nigeria societal conditions like poverty, a lack of social services and medical care, declining education standards and a high degree of religious indoctrination all play their part.

A difficult report to read, the case studies are haunting. In serious cases, the report reads, the accused child is killed. In other cases the child suffers significant rights abuses and violence like being burnt with acid or fire, being severely beaten, poisoned or buried alive.

The report also singled out Nollywood films for perpetuating the belief in child witches. The most famous of these Nollywood productions is a movie called End of the Wicked written, produced and starring Helen Ukpabio. The crudely made film shows child witches recruiting and indoctrinating children, flying through the air, doing the bidding of a “satan” and eating human flesh.

Watch End of the Wicked:

Ukpabio is the founder of the Liberty Foundation Gospel Ministries, whose website proudly exclaims that “the lady apostle” (Ukpabio) and her followers aren’t schooled in theology. However, this doesn’t stop Ukpabio and her flock from aggressively growing the congregation. New markets are sourced through “soul hunting”, crusades to get the attention of unbelievers, movies and music, soccer evangelism, programmes for singles as well as through Ukpabio’s pen.

A prolific writer, Ukpabio’s books include Stepping out of Demonic Contamination and Seat of Satan Exposed. Following the massive success of her first video, Ukpabio currently has 17 other titles for sale on her website. When she’s not making videos, Ukpabio focuses on her “Evangelical mission and delivering the oppressed, afflicted possessed and various bonds of wickedness”.

“There is an economy around witchcraft and that economy is not regulated,” says Igwe. “There are ways to manipulate people who have problems and these pastors have a way of manipulating and squeezing money out of people who are poor. Witchcraft accusations are a symptom of poverty, not just mental poverty but also material and financial lack.”

“As long as you are claimed to be possessed you can be maltreated in any form. Many people who die in the process are unaccounted for because when you die in the course of being delivered, there is no sympathy from society, nobody is held accountable for the death.” Igwe says.

He adds that it is one thing having a law, but policing it is another issue entirely, particularly in a country where there’s no compassion for people who are branded witches.

And these people include young children like Esther, who was living on the streets near a market until she was taken. “A man of around 40 took Esther back to his home and was having sex with her. I was told and I was so shocked. I took this girl and I handed her over to the government. Later I found out that Esther fled because the government doesn’t take proper care of these children,” says Igwe.

However, the government handed Esther straight back to the father who accused her of being a witch. “Very soon Esther returned to the ‘madman’ who was sexually abusing her,” Igwe says. Fortunately he got tipped off that Esther had returned to her abuser and rescued the young girl again.

“Esther is now about eight years old, but has been exposed to repeated trauma for the past four years. It is difficult for me to capture the scale of the trauma that she has been through,” Igwe says. Esther is now in a private home where she is being cared for.

Back in South Africa, the witch-hunt stories continue to make middle pages of some newspapers, but evoke little response outside of civic or NGO circles. Superstition and the suffering caused in rural communities by witch-hunts live beyond the periphery of the urban chattering classes. It is just another page in a newspaper that can be quickly turned over. God knows, there’s enough to be horrified about in today’s South Africa. DM

Siyabulela Fobosi for GroundUp • 1 hour ago