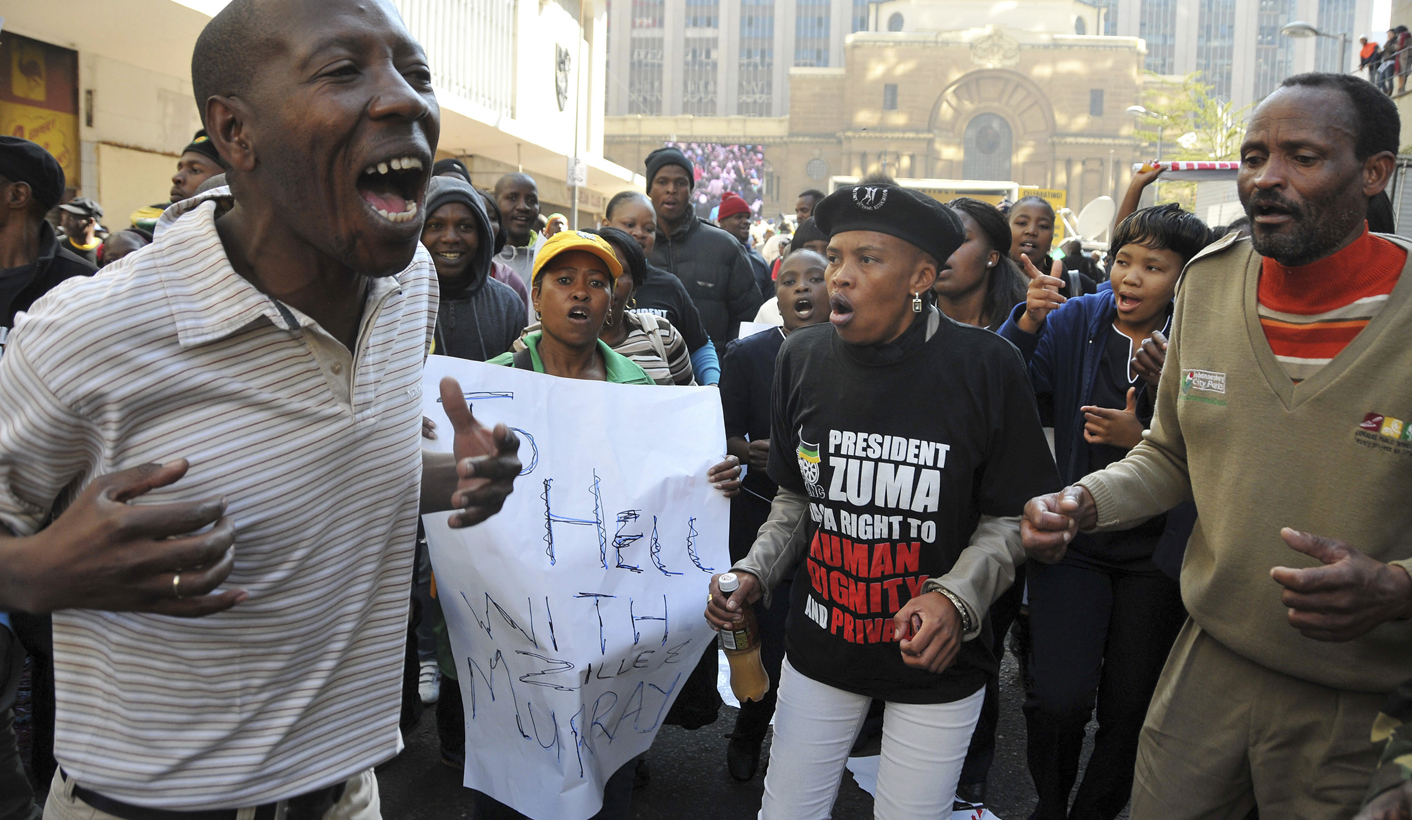 After a total onslaught by the tripartite alliance, City Press has capitulated to ANC demands to remove the image of The Spear painting from its website. Editor-in-chief Ferial Haffajee says her decision was driven by a need to bring calm and to protect her editorial team – she also experienced hurtful personal misogynist attacks. By MANDY DE WAAL

The Spear, that controversial satirical painting of President Jacob Zuma in Leninesque pose with his genitals displayed by Brett Murray has been removed from the City Press web site. This follows a week of high drama and emotion during which the tripartite alliance called for a boycott of City Press, the newspaper’s staff received death threats, newspapers were burnt in protest and a City Press journalist was evicted from an NUM conference. During the union conference, SACP’s Blade Nzimande who initiated a call for the paper’s boycott said those who defended The Spear were racist and rejected reconciliation.

“The Spear is down. Out of care and as an olive branch to play a small role in helping turn around a tough moment, I have decided to take down the image,” Haffajee wrote in a column on the City Press website this morning. “When we published an art review, which featured The Spear as one image, I could not have anticipated it would snowball into a moment of such absolute rage and pain. Have I been naïve in this? Perhaps. City Press is not and has never been an object of division; neither am I. I prefer to understand City Press as a bridge across divides, a forum for debate.”

Speaking on 702 Talk Radio, Haffajee said she had taken down the Lenin-styled portrait of Zuma with genitals exposed because she “wanted to restore calm”. In an interview with Daily Maverick on Sunday she expressed concern for the safety of her editorial team, a concern she reiterated on radio.

Haffjee said she didn’t want to be forced into the role of opposition. “My own identity is that of critical patriot, I am a great fan of my country and that is how I want to edit. Besides, there are really important stories we lost sight of like the continued investigation into Lieutenant General Richard Mdluli, unemployment and the infrastructure budget,” she wrote. “That we are now a symbol of a nation’s anger and rage is never the role of media in society. We are robust and independent, yes, but divisive and deaf, no.”

The saga of The Spear and that of the dénouement of former crime intelligence boss Richard Mdluli played out side-by-side during the past couple of weeks, with the urgent High Court action, emotional confession by Zuma, and his lawyer breaking down in court capturing the national discourse. Social networks – electronic and domestic – were consumed by the issue that divided a nation, and the matter of Mdluli was completely overshadowed by the heated and polarised discourse about that painting.

“This week society began the path of setting its mores on how we treat presidents in art and journalism; what is acceptable and what is not. I hope we will reach these conclusions decently in debates, colloquiums and plenaries rather than setting them in blood or angry red paint or in orange flames snaking up from burning pages,” Haffajee wrote.

Earlier she told Daily Maverick she’d have to restore the paper’s relationship with the ruling party, saying: “I am going to have to build some bridges after this.”

Despite aggressive ANC action on the frontline of The Spear impasse, Haffajee said “on the contrary they are reaching out (behind the scenes) to try to talk to our staff.” Haffajee refused to offer further comment on these negotiations.

Members of City Press are said to have met with the ANC on Friday, and a meeting was scheduled with the SACP on Monday.

In this Sunday’s paper Haffajee apologised to Duduzile Zuma-Sambudla who applied in the South Gauteng High Court last week on behalf of the President’s children to have the painting banned.

“I am advised that the portrait of my father with his sexual organs exposed is deeply offensive and constitutes hate speech because it displays disdain for our cultural attitudes towards the public display of sexual organs… In fact in our culture, when you wish to insult an opponent, you insult them by referring to the sexual organs of parents. Such an insult often leads to violent conflict between the parties involved,” Zuma-Sambudla is reported by IOL to have stated.

“I cannot, together with my siblings, freely mingle with the public without a deep feeling of being ostracised by the demeaning discussions about my father’s private parts… My brothers and sisters are exposed to abuse by other children in schools and colleges when their father’s sexual organs are publicly displayed and discussed on radio stations and talk shows.”

In a very personal response to Zuma-Sambudla, Haffajee expressed empathy for the President’s daughter. “I feel your pain at Brett Murray’s work. I understand that what is a work of satire to me is a portrait of pain to you. I understand the impact on your little brothers and sisters, who may face teasing at school. Playground cruelty leaves deep scars. And if they and your dad saw the work in our pages and it caused harm, then I apologise from the bottom of my heart.”

But the apology on Sunday was not enough for the ANC. “Ferial knows where we are. She must come to us and say this, not in a paper which we do not read. She knows what we want. We want the image to be removed and an apology.

Otherwise, we don’t want to hear anything else,” the ANC’s Jackson Mthembu told The Times. “That so-called apology will mean nothing because we are not marching to the City Press. We are marching to voice our outrage and anger over the insult to another human being, that human being our President Jacob Zuma,” the ANC spokesman said.

He told Mail&Guardian the boycott would extend to not granting City Press journalists interviews with ANC members until the ruling party had its way. “We are engaging with this on various platforms, in the courts and so forth. Other people, you never know what they can do when they are totally outraged. We don’t want to reach those levels where people are showing their outrage through doing things that all of us will be sorry about,” Mthembu told Mail&Guardian in a thinly veiled but unambiguous threat.

By Monday the ruling ANC had forced its way through. “It was quite shocking to watch three big men of government, the SACP general secretary Blade Nzimande, the governing party’s Gwede Mantashe and its spokesman Jackson Mthembu call City Press all manner of names and to call for a boycott. That they have failed is neither here nor there; that they did marks a moment of inflexion in our society,” Haffajee wrote.

“Of course, the image is coming down from fear too. I’d be silly not to admit that,” she admitted before talking about a personal attack on her as a female editor. “An ANC leader from my area on Twitter started a campaign of such disinformation I had to spend much of Saturday night quelling it. He knows where I live. What will he do next? The tweet that broke this camel’s back was by Patrice Motsepe, the businessman and soccer baron whom I have known since university and with whom I thought I had a congenial relationship,” she added.

“He said I probably don’t want the painting to come down as I need it for the long lonely nights. I presume he meant its phallus. He knows I am single. It must have taken great anger to get a man I know to be of elegance and wit to get to such a point. I play tough tackle and expect to get intellectually whipped when I do. But this humiliation I can well live without. It’s simply not worth it and I guess we have made our point and must move on.”

The ANC is ruthless, patriarchal and masters at manipulating public discourse. With threats, misinformation, fear and an us-versus-them invective known to have spurred violence and bloodshed, the ANC and its tripartite alliance partners humiliate, scandalise and subject to an indefensible blitzkrieg of ad hominem attacks opponents.

Facing this onslaught of terror, who can blame Haffajee and City Press for capitulating? DM

Update: City Press editor-in-chief Ferial Haffajee has apologised to mining billionaire Patrice Motsepe for mistakenly alleging he had humiliated her on Twitter in a column she wrote to explain why she did an about-turn on The Spear, and removed the image from the paper’s website. Daily Mail reports Haffajee ‘tweeted to say “Patrice, the real’ had called her to say the Twitter persona @PatriceMotsepe was a fake and his lawyers were investigating.”

Photo: Members of the ruling African National Congress (ANC) demonstrate against the showing of a painting by artist Brett Murray, outside a court in Johannesburg May 22, 2012. Two men vandalised a portrait of South Africa’s President Jacob Zuma with his genitals exposed on Tuesday, intensifying a heated debate about the picture that has enraged the ANC. REUTERS/Ihsaan Haffejee.