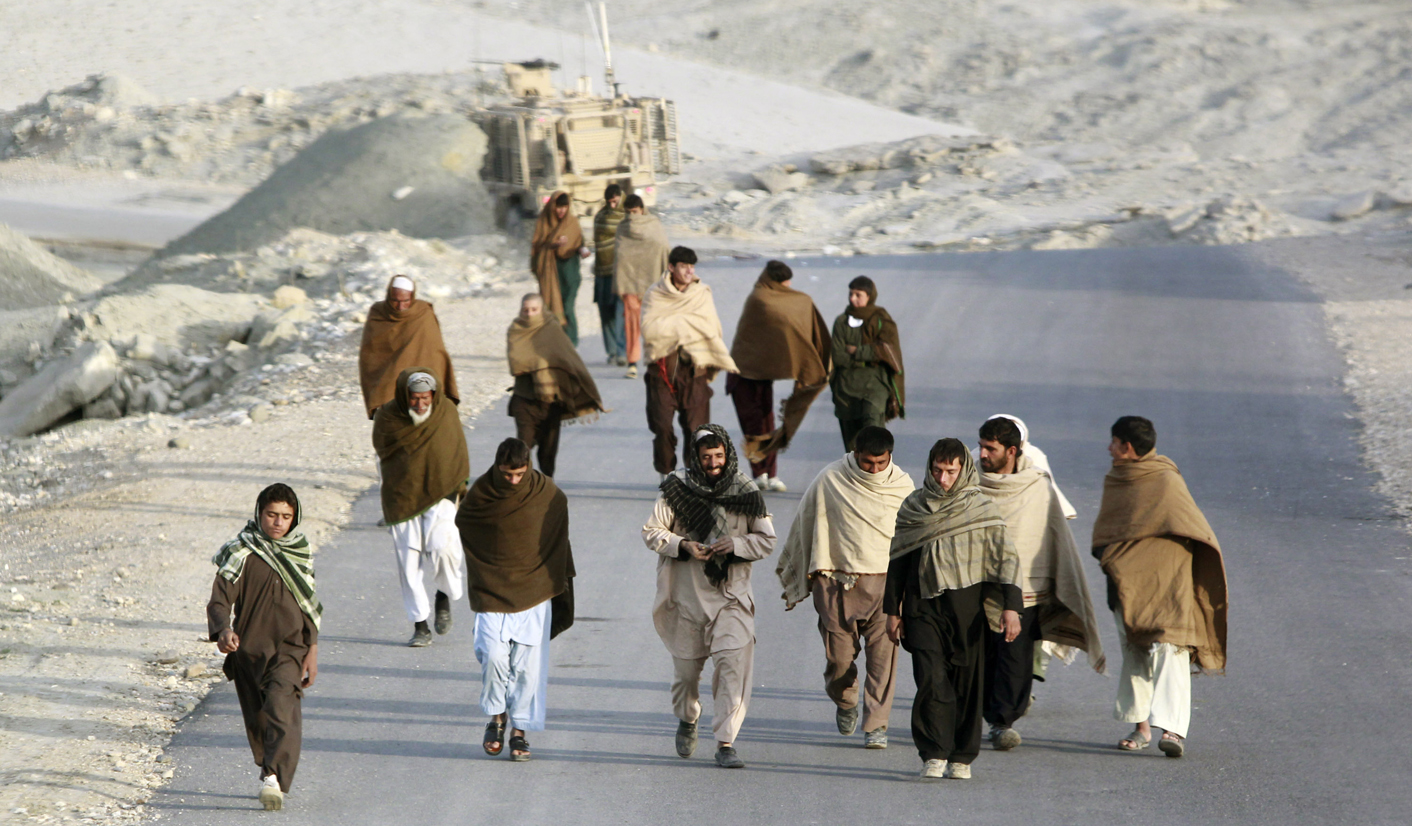 When the Afghan government unveiled plans for a road linking his small village to larger centres elsewhere, Rahmanullah was so enthusiastic he offered a section of his farm for the route, thinking it would help move his produce to larger markets. By Hamid Shalizi

He even signed up for the construction gang, earning $6 a day to help build the 28 km-long route from Gardez, the capital of east Paktia province, and Rahmanullah’s home in the mountainous Mirzaki district.

But two years on and Rahmanullah’s farming land has gone and the road has largely disintegrated, along with the hopes of local people for a less hardscrabble life in a province where the insurgency offers much-needed money for fighters.

“I gave my farming field for free to the builders to give us a road and this is the result,” Rahmanullah said, glumly pointing to a cratered and crumbling surface snaking from his village.

Like other similar projects meant to build prosperity under the counter-insurgent orthodoxy that people with jobs won’t fight, the Mirzaki road fell victim to shoddy construction and kickbacks in the award of lucrative building contracts.

More than $57 billion has been spent on Afghanistan’s reconstruction since the toppling of the former Taliban government in 2001, but critics says millions of dollars have been misspent as donor aid is parachuted on to an opaque maze of local and international contractors.

Afghanistan is regularly ranked close to the bottom of countries most affected by corruption, according to the Berlin-based graft watchdog Transparency International, with donors linking ongoing aid as the war winds down to improvement in its record.

“The village people hoped the new road would help them find good markets for their vegetables and fruit, getting them there on time before they spoiled,” said Rahmanullah, who like many Afghans has one name.

According to a Paktia provincial official, the $7 million contract for construction of the Mirzaki road was given to an Afghan company named Seven Star, but was then sold on to another local contractor for less than $6 million.

“I got only 25 percent of the contract upfront. Other instalments for the rest were delayed for months. Finally I had to hand over the project to another company for less money,” Fahim told Reuters.

Another 105-km road joining Paktia to neighbouring Khost province, to the northeast, has also been crippled by graft and kickbacks, some Afghan officials concerned about the problem say on condition of anonymity, fearing repercussions.

That contract, worth $126 million, was awarded to an Indian-based company three years ago, but it was then onsold to an Afghan contractor for $84 million. The road is still incomplete.

Visiting a half-finished part of the route, Paktia governor Juma Khan Humdard fumed at the contract skimming, which forces contractors lower on the chain to skimp on costs and build less-durable roads guaranteed to deteriorate.

“There has been corruption, kickbacks. That’s why this road can’t be built,” Humdard said.

Road-building has been a major priority for President Hamid Karzai and Western backers as his government’s popularity fades over its inability to deliver the progress sought by voters in a country where a third of the 30 million population live beneath the poverty line.

The U.S. Agency for International Development promised to build as much as 1,900 km of roads under one programme but delivered less than a tenth of that when the programme was cut last year, after U.S. taxpayers had spent almost $270 million.

USAid did not address specific accusations about the programme, but a spokesman told Reuters it had invested $2 billion in total to build and rehabilitate 1,800 km of roads.

Afghan officials said while 6,700 km of road had been asphalted across Afghanistan, around 4,000 km were quickly deteriorating due to shoddy construction and graft.

The problem even extends to the capital, where poor drainage and heavy winter rains and snow left many major roads choked with traffic jams and impassable.

Azizullah Ludin, the head of the government’s anti-graft unit in Kabul, criticised civilian/military Provincial Reconstruction Teams, or PRTs, for their method of awarding contracts, which sees kickbacks go to contracting companies.

“There is no transparency in contract letting by PRTs or other foreign military units. The contracting companies take a share for themselves and then pass contracts over to others desperate to break into potentially lucrative aid contracts.

“We have a case of a $50 million contract awarded to a foreign company with no equipment or machinery, who then passed it to an Afghan company for $30 million,” Ludin said.

“It’s not only Afghan companies, but foreigners. There are many such cases, not only in roads, but in almost every part of construction.”

Ludin said construction of many buildings had also been suspended due to poor quality of materials used, from schools to hospitals and government buildings.

“A $9 million health clinic was built in Bamiyan province. When we inspected it, it was found to be vulnerable to collapse because of winter snow and even small earthquakes,” he said.

The governor in volatile southern Helmand province, Gulab Mangal, said he had suspended construction of three major roads through the province last month after complaints from local villagers that they had been poorly built.

The roads were meant to connect the provincial capital Lashkar Gah to Giresk and Nawa districts, as well as the town of Marjah, where U.S. surge troops fought one of the fiercest battles of the Afghan war in 2010.

Mangal also blamed the bidding process and said construction companies had been awarded contracts based on their family or business connections with deciding officials in Kabul, rather than their ability to deliver or any knowledge of Helmand.

“Government officials, lawmakers and even the Taliban received a share of money from those contracts,” an official told Reuters in Kabul. “There have been amounts of money involved.” DM