Traditional leaders and the fuel that fires homophobia 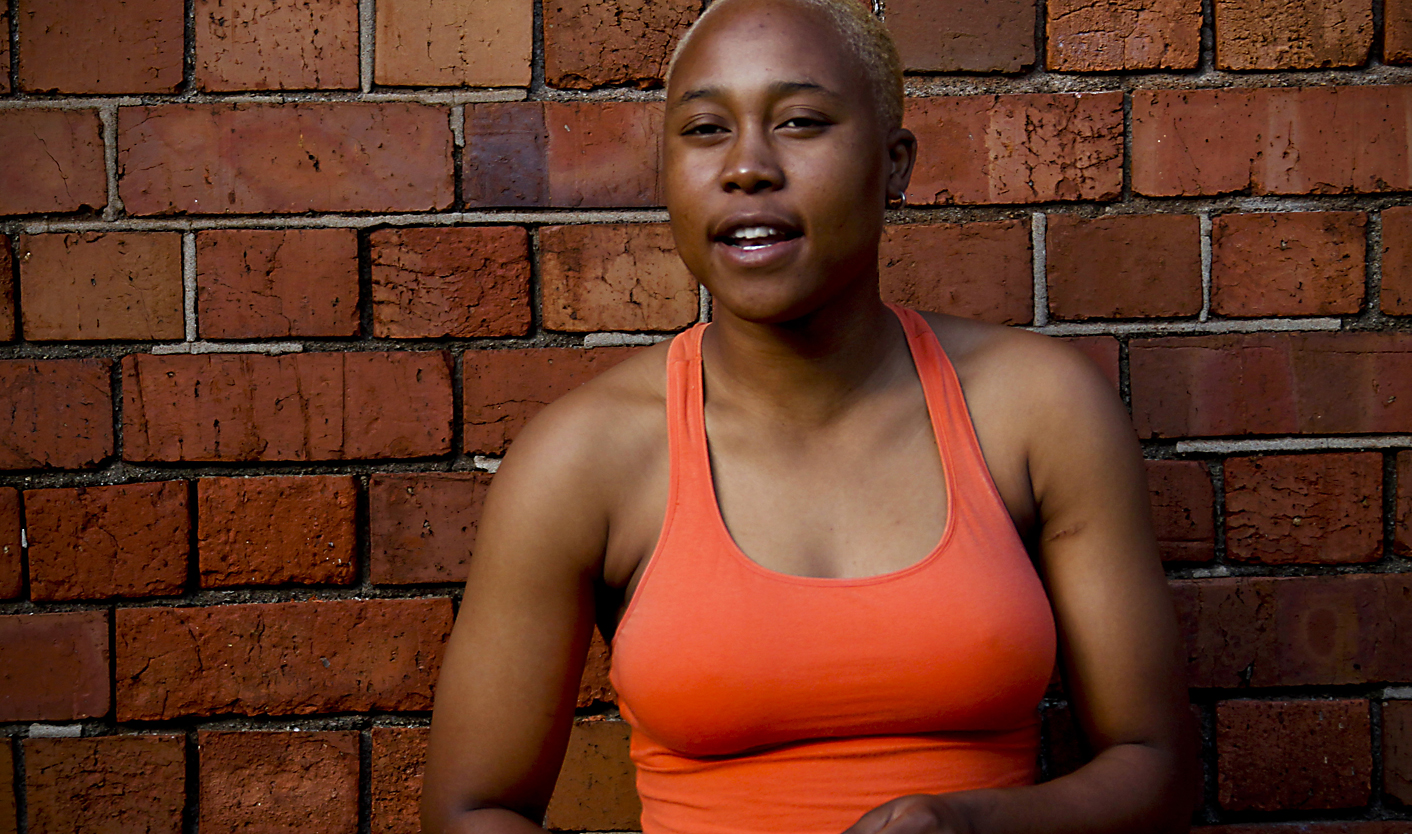 As the National House of Traditional Leaders lobbies for gay rights to be excised from the Constitution, and the chair of the Constitutional Review Committee sprouts anti-gay statements, lesbians and gays continue to be subject to violent attacks. MANDY DE WAAL speaks to constitutional law professor Pierre de Vos about human rights and irresponsible politicians who fuel homophobic hate in South Africa.

Noxolo Nogwaza was 24 when her body was found last year in an alley behind a store in KwaThema. The young mother of two was raped, stoned and stabbed in the East Rand Township that is notoriously linked to corrective rape and murder.

KwaThema is the same township where the body of celebrated female soccer star and Banana  player, Eudy Simelane, was found in April 2008. Simelane was gang-raped, beaten and stabbed 25 times before being disposed of in a ditch.

Nogwaza and Simelane were champions for gay rights. Simelane was one of the first women to live openly as a lesbian in KwaThema, while Nogwaza led a local gay rights group – the Ekurhuleni Pride Organising Committee.

The Star reports that a year after Nogwaza’s murder no progress has been made in her case.

Pierre de Vos, the Claude Leon Foundation Chair in Constitutional Governance at the University of Cape Town, says it is not uncommon for gay people’s rights to be ignored by those who execute the letter of the law.

“When I go to workshops I am shocked to hear from lesbian women and gay men that when they go to the police they are told to ‘voetsek’ because they are just lesbians or ‘moffies’ and don’t have any rights,” says De Vos, who adds that the government hasn’t educated the very people who are supposed to enforce human rights or secure a respect for diversity and difference.

De Vos believes the government is neglecting to do “a very important job” in service departments. “There should be far more diversity training to educate people in the police force not to be homophobic. It is troubling that 18 years into our democracy we haven’t actually transformed those people who are supposed to protect human rights. We speak so much of transformation, but our government hasn’t taken the steps to enable a respect for diversity.”

The result is a gap between the human rights enshrined in the Constitution and the lived reality. People are protected by the Constitution and have an awareness of their rights, De Vos says, but the problem is that it is difficult to enforce these rights in a personal sphere because of the prejudices and hatred that surround South Africans.

De Vos believes this prejudice and hatred is intensified by the irresponsible, homophobic statements made by traditional leaders in recent times, notably the National House of Traditional Leaders, which recently appealed to Parliament to have a clause removed from the Constitution that protects gay rights.

A Parliamentary report by the Constitutional Review Committee this April shows a submission by the leaders that proposed the “exclusion of ‘sexual orientation’ from Chapter 2 of the Constitution, which deals with the Bill of Rights.”

This particular section of the Constitution reads: “The state may not unfairly discriminate directly or indirectly against anyone on one or more grounds, including race, gender, sex, pregnancy, marital status, ethnic or social origin, colour, sexual orientation, age, disability, religion, conscience, belief, culture, language and birth.”

In its response, the review committee said the submission was under consideration, while City Press reported that an ANC caucus would decide whether this proposal for a constitutional amendment will be debated in Parliament.

The chairman of the Constitutional Review Committee is Patekile Holomisa, who is also president of the Congress of Traditional Leaders of SA, which has earned a degree of infamy because of its wont to rubbish gay rights. Speaking to City Press, Holomisa said most South Africans didn’t want gay rights protected, and that the ANC caucus was opposed to gay marriage in any event.

“The last time this issue was discussed was about same-sex marriages. Most of the people in the caucus were opposed to it, but then Luthuli House and the leadership instructed us to vote for it,” Holomisa told the newspaper, adding that the ANC knew the “great majority does not want to give promotion and protection to these things”.

De Vos says Holomisa’s statements come as no surprise. “Holomisa is a traditional leader and this is part of a far wider fight-back by patriarchal forces in South Africa, which we also see with the tabling of the Traditional Courts Bill and the like. These are people who, during the negotiating process (of the Constitution), were marginalised and their views were rejected in favour of more progressive views because the ANC saw itself as a progressive institution. But they are now trying to claw back some of the space that was ceded to the progressives inside the ANC. That is the context.”

“It is worrying that someone with so much influence inside the governing party would make these deeply humiliating statements,” says De Vos, who doubts that the traditional leaders’ bid to amend the Constitution will be successful. “There seem to be enough sane people in the ANC to not to want to go down that route of discrimination against a vulnerable group in society.”

Although South Africa protects discrimination against people on the basis of sexual orientation in the Constitution, the lived reality is very different, as evidenced by the deaths of Nogwaza and Simelane.

De Vos points out that wealth, class and location can buy protection from this prejudice. The impact of the homophobic leaders has little impact on the “chattering classes” or those living in cities.

“It is very worrying if you live in a community where you are not protected from the hatred of people around you by your money, class or a geographic position. Often where there is a latent prejudice or simmering hatred the pronouncement of leaders can spark action on the part of ordinary people to give effect to their hatred,” says De Vos.

“This can lead to assault and even murder, which we have seen in many cases in South Africa, especially for lesbian women who have been raped and murdered because of prejudice. It is very irresponsible for a leader to make that kind of statement because it can send a signal to other people that it is actually okay to violently attack individuals.”

A study a few years ago by gay rights group The Triangle Project showed that in the Western Cape 44% of white lesbians lived in fear of sexual assault, and that 86% of black women in the province felt the same.

“Every day you feel like it’s a time-bomb waiting to go off. You don’t have freedom of movement, you don’t have your space to do as you please, you are always scared and your life always feels restricted. As women and as lesbians we need to be very aware that it is a fact of life that we are in danger, all women are in danger,” a lesbian from Soweto, Johannesburg told ActionAid, which compiled a survey called Hate crimes: The rise of ‘corrective’ rape in South Africa.

In that same document a quote from South Africa’s National Prosecuting Authority: “Whilst we are mindful of the fact that hate crimes – especially of a sexual nature – are rife, it is not something that the South African government has prioritised as a specific project.”

Righting homophobia in South Africa will take thinking about education and the human rights regime in a much more structured and coherent manner, says De Vos, adding: “We need to think more carefully about how we can create active citizens who can demand their rights and actively participate in the enforcement of their rights, but also respect the rights of other people who don’t agree with them.”

“There should be policies in place that say: ‘what are the values we want to convey when we teach our children?’ It is not only about teaching people to read and write or to add up and subtract. There are always values involved when we educate people, so we need to think about our value system, and the starting point of that system should surely be the constitutional values – respect for human dignity, for equality, for freedom, and the notion of respect for diversity,” he says.

De Vos says that South Africa has been “transformed on paper” but hasn’t been transformed in practice. He says teachers, police officers and people who work in Home Affairs and other branches of government need to be trained to embrace diversity.

But as traditional leaders volley to reclaim the power they’ve lost and to exert their influence, the lack of sanctions against politicians who openly threaten gay rights – or call for the Constitution to limit or ignore gay rights – is telling.

“Political leadership is important, and this isn’t something that’s always present in this country from various political parties,” say De Vos, talking about what it will take to change homophobic attitudes in South Africa.

“By the very nature of politicians they want easy popularity, and exploit situations and prejudices. But real leadership means that one has to sometimes take unpopular stances in the protection of one’s principles. Our politicians are not prepared to do this and are more shameless than politicians in some other parts of the world.”

Back in KwaThema, The Star tells how township residents gathered to honour Nogwaza and other people whose lives were lost to homophobic violence. During the ritual of remembrance people wore T-shirts bearing the names of those who lost their lives to hate.

“They sang and swayed, sporting matching purple shirts that read ‘Struggle continues’ and ‘In memory of Noxolo Nogwaza, Eudy Simelane, Girly Nkosi, Xolani Dlomo’,” the report reads. Nkosi was murdered in 2009 and Dlomo is said to be a gay man murdered in KwaThema in 2004.

The gay rights organisation Nogwaza belonged to is planning to protest at the local police station because there is no progress on her murder case, but has yet to receive approval for the demonstration. “We have to do something,” the chair of the rights group told The Star. “Up to today, nothing has been done, which is so unacceptable.”

Similarly nothing is done to those politicians whose anti-gay pronouncement only serve to fuel homophobic hatred. DM

Photo: A member of the “Chosen Few” soccer team is pictured before a training session in Johannesburg April 29, 2010. The Chosen Few, launched in 2004 by the Forum for the Empowerment of Women (FEW), is South Africa’s only lesbian soccer team, which is fighting not just for the ball but to overturn brutal prejudice and discrimination. REUTERS/Peter Andrews.