Love, sex and the fear of a small woman, Zanele Muholi 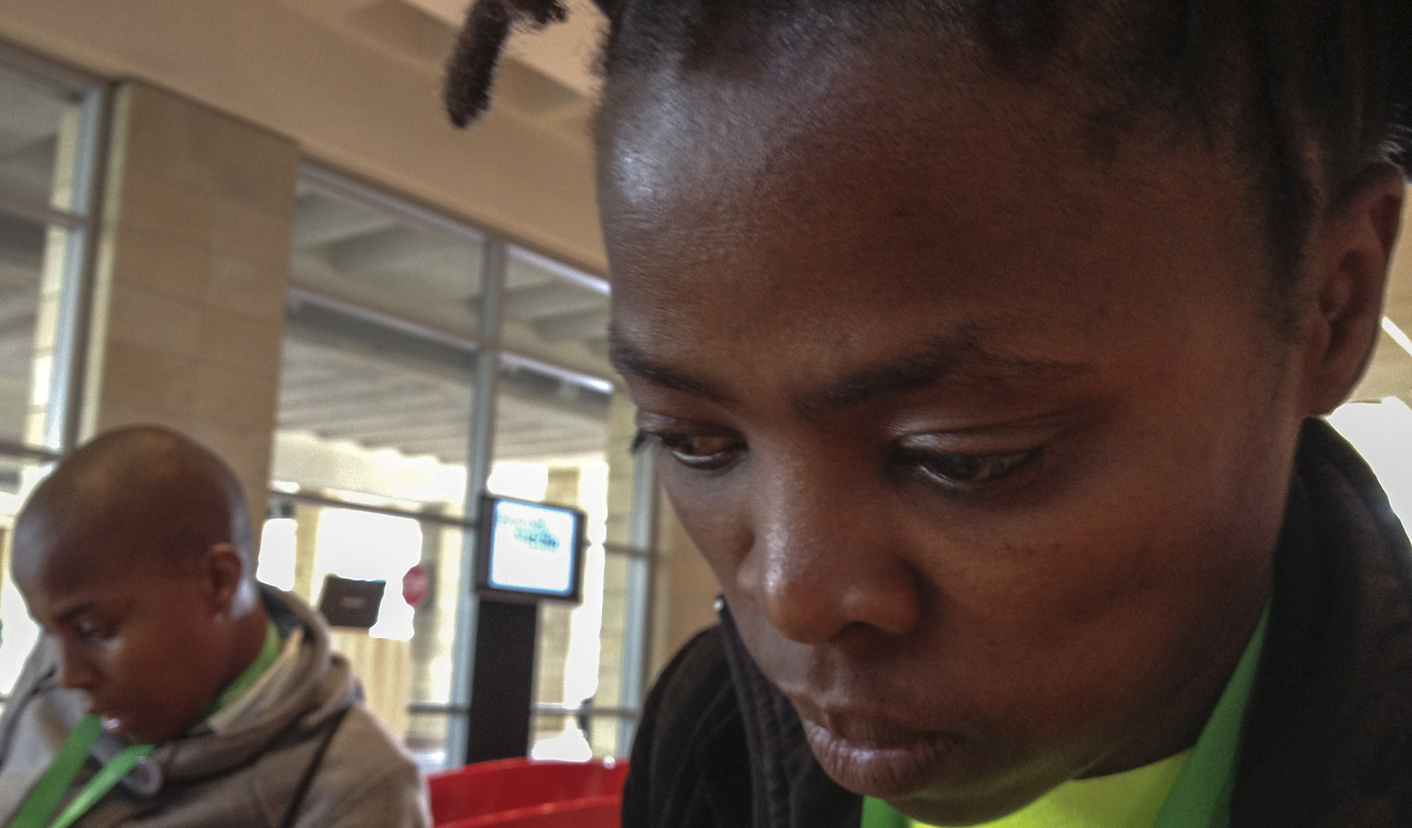 There might well be a correlation between the defacement of The Spear in Johannesburg and a burglary in Cape Town. In the latter, five years of photographs have been stolen. But they are no ordinary photographs, for they depict naked black women being in love – with each other.

Zanele Muholi’s works feature prominently at the Open Forum conference on ‘Money, Sex & Power’ in Cape Town. A wall of black and white prints of naked African women sharing moments of love enliven the atmosphere as an internationally renowned Egyptian feminist, Mona Eltahawy, speaks about feminism in a time of revolution. (Eltahawy was sexually assaulted and had both her arms broken by the police after being arrested at Tahrir Square). She is passionate about combating not just the fascism of the military dictatorship but also Egyptian misogyny.

Just then, a loud clatter drowns out her voice. One of Muholi’s mounted prints has fallen down, breaking the image. Eltahawy repeats herself, and the discussion moves on to the contradiction of women claiming their full rights but having to be protected against assault and rape in a public place by a ring of decent men. On the wall, the absence of the missing photograph seems to speak of the gap between a world we would like to live in – where freedom of choice and preference are not an issue – to the reality outside the conference walls, where some are willing to kill people for their intimate choices.

Muholi, a tiny woman with dreads and big, round brown eyes, sits on the floor in one of the corridors, leaning back against the wall. She is surrounded by friends and young gay women whom she had trained and mentored in documenting their lives.

Muholi’s work and activism have challenged the stereotypes of lesbian life, in an African environment. Her photographs and commentary make many people uncomfortable, even angry. Sexuality in Africa is a thorny topic. For many, gay female love is positively radioactive. It seems to make the more conservative among us incandescent with rage.

The South African traditional leadership body – Contralesa – is lobbying hard to have the Constitution changed to once again disallow gay marriage. They want a referendum, and are sure South Africans will reverse the right of gay folks to a legally binding partnership. That is, marriage.

In this heated atmosphere, Muholi’s images stoke the flames of prejudice among many. Her images of love, some might say forbidden love, really provoke the majority of people.

She spoke at the conference about the importance of art in raising awareness around lesbian and issues and giving a different view of black women in general. Ten days before the conference, her Cape Town apartment was burgled and all her hard drives were stolen. Twenty hard drives, her back-up and archive. Five years of photography and writing lost. Nothing else – including jewellery, TVs, clothing – was stolen. “I’ve dedicated my entire life to documenting queer lives and now my projects are gone.”

Muholi is devastated, the raw take of her life’s work is gone: “I feel like a breathing zombie right now. I don’t even know where to start. I’m wasted.”

Richard Lee, Open Society Initiative for Southern Africa’s communications manager, says: “This is obviously a huge personal loss to Zanele, but also to SA’s cultural heritage. Her work is unique. People in SA should be as upset about this as people in Europe are when a Picasso is stolen from some museum in Vienna.” Among her body of work is that of a young woman killed for her sexual orientation: “Last year, there was a young woman killed in KwaThema, her name was Noxolo Nogwaza, and it happened. I was in Johannesburg that week, and I stayed until the funeral. I documented all of that work. All those pictures were stolen.”

Work from all over Africa was lost, including a project called Queer Malawi. She often gives cameras to young lesbians to document their own lives. Another body of work was a deep engagement with a lesbian couple in Zimbabwe, where the couple really poured out the depth of their love for each other to Muholi. She decided to hold the work until Zimbabwe had a constitution more like our own, for the couple’s safety. Now those photographs are out of her control.

The nature of the theft also raises a lot of red flags. It appears the thieves knew what they wanted. The drives were hidden in different parts of her apartment, but all were found. Even her camera data cards were stolen. Yet valuable equipment like a top-of-the-range Canon XF100 camera was left. A data projector in its box was ignored. Her partners’ hard drives were not taken, though they were in open view.

Tears slide unnoticed from the corners of Muholi’s eyes, and she slumps further in a chair, “For me this is work, it is our history and we need it.”

It is not as if the unassuming Muholi is a controversial, in-your-face activist, “The work is treasured by me. This work is not about Zanele, it is about a community. It has people in it. I just live my life as a simple life, nobody knows who Zanele is, because I don’t live a shiny kind of life, I just live my life.”

Was Muholi’s work indeed targeted? Did it so offend some in our society that they decided to rid their world of it? Was one small woman’s work too powerful for them to handle? As she says, “Why are queer lives such a threat in a democratic country?” DM

For anyone wishing to assist Muholi and our society regain the work, please contact [email protected] or go to a website set up to raise money and awareness.

Her work can be seen at Zanele Muholi.