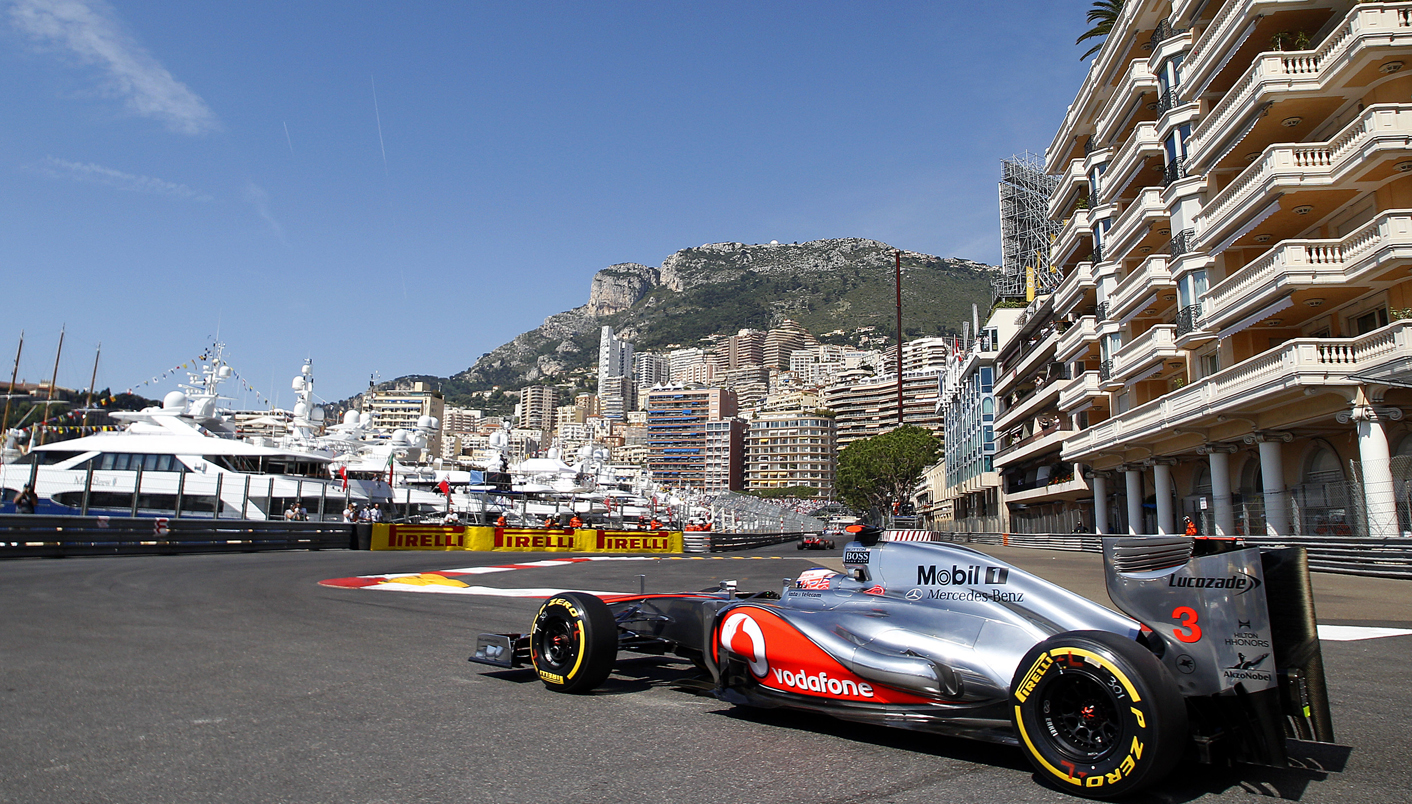 McLaren's Jenson Button set the pace in practice for the Monaco Grand Prix on Thursday after morning sunshine gave way to afternoon showers. By Alan Baldwin

Button, a winner around the treacherous metal-ringed street circuit in his 2009 title season with Brawn GP, skimmed the barriers and roared past the luxury yachts bobbing in the harbour with a fastest time of one minute 15.746 seconds on super-soft tyres.

“We have not done a lot of running for a Thursday at Monaco so hopefully Saturday will be a bit better,” he said looking forward to qualifying, with Friday a rest day in the principality.

Button’s time was set in the dry as drivers got in quick laps in the first 15 minutes before the rainclouds darkened the skies and made conditions slippery.

Ferrari’s Fernando Alonso also showed his Monaco mastery with a pace-setting 1:16.265 in a morning session cut short in a cloud of smoke when Heikki Kovalainen’s Caterham blew its engine in the tunnel.

The Spaniard, twice a winner in Monaco with Renault and McLaren, was fourth in the afternoon.

Romain Grosjean burnished his hopes of becoming the first French Formula One winner in Monaco since Olivier Panis’s unlikely victory in 1996 with the second-fastest time in both sessions.

“I like Monaco, it’s good fun. The car is going well at the moment so let’s see what we can do later on. It’s important to have a car that you are confident with and work every single detail because it makes such a big difference,” said the Lotus driver.

Ferrari’s Brazilian Felipe Massa, under intense pressure to deliver after scoring just two points in five races, was an encouraging third in the second session.

Mexican Sergio Perez, returning to the scene of his big accident in qualifying last year, had been third in the morning for Sauber with race favourite Lewis Hamilton fourth for McLaren.

The largely incident-free first session was red-flagged with just over nine minutes to go when Kovalainen’s car blew its engine and filled the tunnel – the fastest point of the circuit – with smoke.

Kovalainen parked up at the tunnel exit as drivers threaded their way through the smoke.

With oil also deposited on the track, organisers decided not to re-start the session.

That left Grosjean’s team mate and 2007 champion Kimi Raikkonen at the bottom of the timing screens after the Finn completed an installation lap but failed to set a time.

He sat out the rest of the session as mechanics worked on his car, returning in the afternoon with the 19th fastest time.

Venezuelan Pastor Maldonado, surprise winner for Williams at the last race in Spain but now among the favourites at a track he loves, was again among the frontrunners with the fifth fastest time in both sessions.

Five-times Monaco winner and seven-times world champion Michael Schumacher damaged his Mercedes’s front wing when he rode the kerbs at the swimming pool complex in the morning. He was 11th then and ninth in the afternoon. DM

Photo: McLaren Formula One driver Jenson Button of Britain takes a curve during the first practice session of the Monaco F1 Grand Prix May 24, 2012. REUTERS/Max Rossi