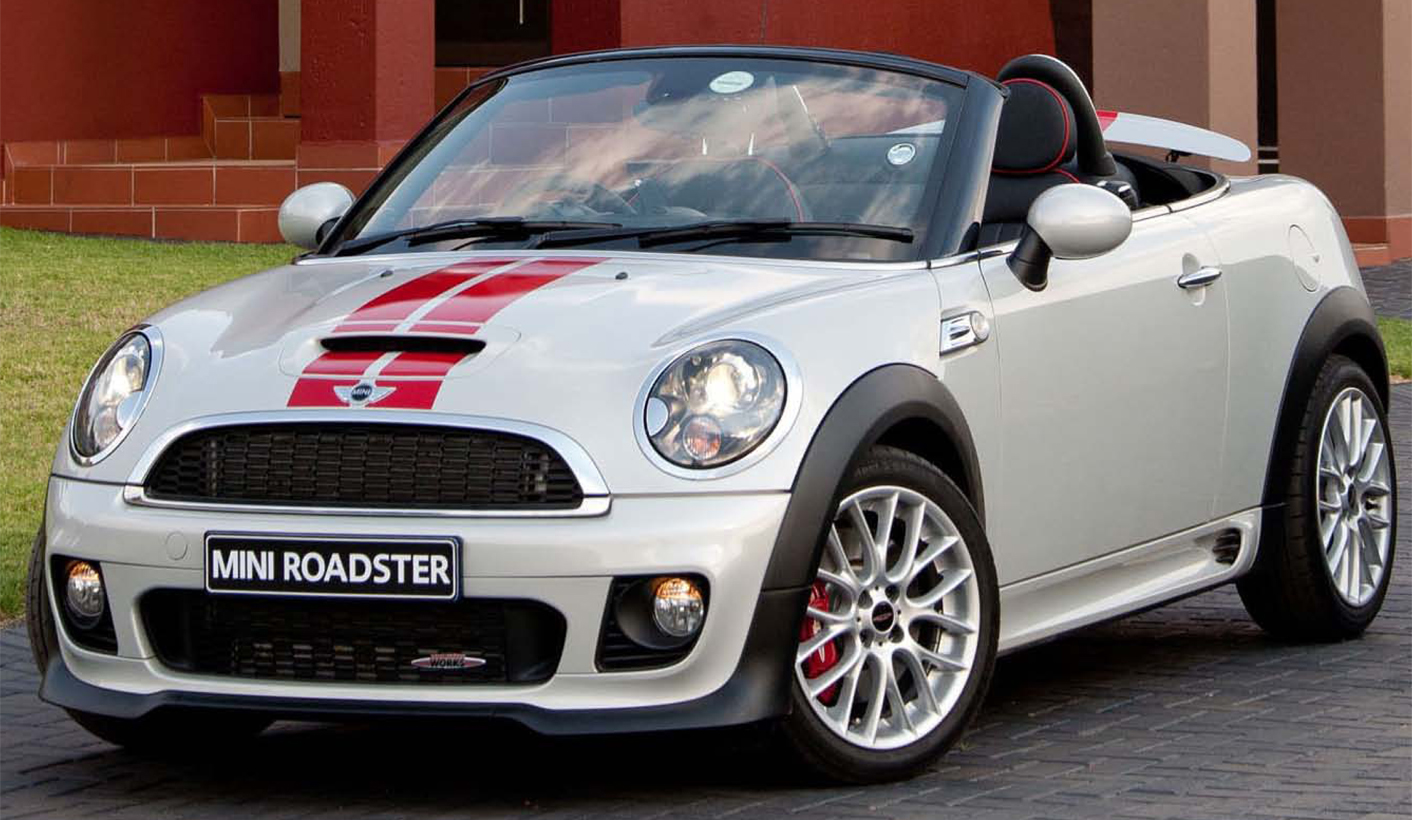 Take a shorter, lighter version of the current-generation Mini. Slice off the roof and replace it with a minimalist canvas hood. Next, squeeze a turbo engine with some serious muscle under the bonnet. Garnish with stripes, big wheels and fat rubber. The result? Mini’s outrageous Roadster John Cooper Works.

There seems to be no limit to the Mini team’s imagination when it comes to creating niche models. Take the two-seater Mini Roadster, for instance. It combines the wieldy manners of the cheeky and chuckable Coupé with the open-top appeal of a purist convertible.

The result is a niche derivative of what is already a niche model. And in no-holds-barred John  Cooper Works form, its appeal is even more restricted. But that didn’t stop Mini from making what must be the most outrageous member of the clan to date.

Mini fans already know that only the hottest-performance models in the Mini line-up get to wear the JCW badge. The Roadster, on the other hand, is all about wieldy handling, agile road manners and overall motoring fun.

Mixing JCW muscle with the Roadster’s light-hearted demeanour could either be a stroke of genius or a case of serious overkill. Either way, it’s certainly a head-turner.

The Mini brand has become strong enough not to have to stick to the rules. In fact, the marque’s ability to flout convention, and to bring unusual and even eccentric models to market, is one of its core characteristics.

While the Mini Coupe’s styling has polarised opinion (not everyone likes a car with a roof that looks like a baseball hat worn the wrong way round), the Roadster is less likely to offend the aesthetic sensibilities of potential buyers. It looks sexy and sassy, while the JCW kit adds a healthy dose of aggression, too. The only visual bone of contention here is the pop-up wing.

Sprouting from the rear deck, the offending appendage may be a mechanically sophisticated way to create some welcome downforce at higher speeds, but, when extended, it looks like a hot-rod afterthought.

The rest of the aesthetic package suits the swift and cheeky character of the car, while those big wheels, the shortened rear, the bug-eyed headlights and the high waistline add the kind of cartoon-character eccentricity that Mini fans find so endearing.

The Roadster swaps the Coupé’s oddball roof for a lightweight fabric hood that’s manually operated and can be effortlessly raised and lowered with one hand. It’s a welcome riposte to the overly complicated, heavily articulated, all-metal hoods that have become the modern cabriolet norm. However, the rear, roll-over loops confirm that safety still comes first.

That the Roadster is shorter than the standard Mini is obvious and, in many ways, that brings the two-seater ragtop closer to the essence of the original, Issigonis-designed Mini. Of course, Sir Alec would have raised an eyebrow at the thought of shoehorning so much power into such a compact machine!

By now, the turbo-charged 1600cc engine employed in Mini’s JCW models is a well-established mill, with a deserved reputation for ample zip and response. Maximum power is a healthy 155kW, combined with a 260Nm torque peak that can be pumped up to 280Nm for short bursts. Given the car’s power-to-weight ratio of 131kW/ton, there’s more than enough muscle on offer here.

In fact, the real challenge is to make full use of all that urge, considering that drive remains to the front wheels only, via a short-throw six-speed gearbox.

While a mechanical limited slip diff would be one solution, Mini has opted for a less brutal electronic differential lock control, together with dynamic traction control, and stability control, to ensure that taming the Mini isn’t the preserve of brawny racing drivers only.

In fact, for all its minimalist intentions, the Roadster JCW isn’t short of features, even if stretch-out space doesn’t count among them. This is strictly a two-seater, and luggage capacity isn’t particularly generous, either.

That said, the cabin looks and feels the sporty part.

As expected, the interior execution faithfully toes the Mini line. In any other car, the detailing would have been considered fussy and contrived, but in the context of this brand, the bright colours, the dish plate-sized central instrument display, and the aviation-inspired switchgear are true to form.

In ergonomic terms, it’s not the most intuitive arrangement, although one does get used to the layout. But the key components – steering wheel, pedals and gear lever – are exactly where they should be.  Add snug, supportive bucket seats to the equation, and the Roadster emerges as a more serious driver’s car than its cheery looks would suggest.

In straight-line terms, the Roadster JCW is no slouch, stopping the clocks at 6.5sec for the zero-to-100km/h dash, and posting a top speed of 237km/h. The combination of a smaller-capacity engine and lots of turbo boost means there is a measure of lag at the bottom of the rev range, but once on song, the four-cylinder mill pulls like a steam train. In-gear tractability is especially impressive, too.

Like the Mini Coupé, the shorter dimensions of the Roadster make for zippy and responsive handling. It’s at its best being hammered through a tight and twisty mountain pass. But at speed, wind noise becomes intrusive, and the rock-hard suspension compromises comfort on all but the smoothest road surfaces.

The electrically assisted power steering still feels a little light, but the taut chassis makes up for it, so that communication between car and driver remains a direct affair. Grip is astounding, and cornering speeds are almost sinfully high.

Those looking for a comfortable ride should look elsewhere, though. On undulating surfaces, or roads where potholes lurk, the Mini quickly feels out of sorts. The ride becomes too bumpy and crashy for comfort, and keeping it pointed in a straight line is a challenge, let alone negotiating corners with any measure of accuracy.

Of course, die-hard enthusiasts will argue that the unforgiving ride suits the gung-ho character of the car, and that softies not up to the driving challenge should stick to the more forgiving (and cheaper) Roadster versions.

But then, the Mini Roadster JCW was never meant to be a volume seller. This car’s virtues lie in the rather specialised combination of rapid, responsive road manners, and that wind-in-the-hair motoring experience South Africans love so much.

So, you need to be a bit of a hooligan – or a very committed Mini lover – to live with the Roadster JCW. More than any other Mini, this one breaks the rules. Which is exactly why, almost against my better judgement, I like it so much. DM