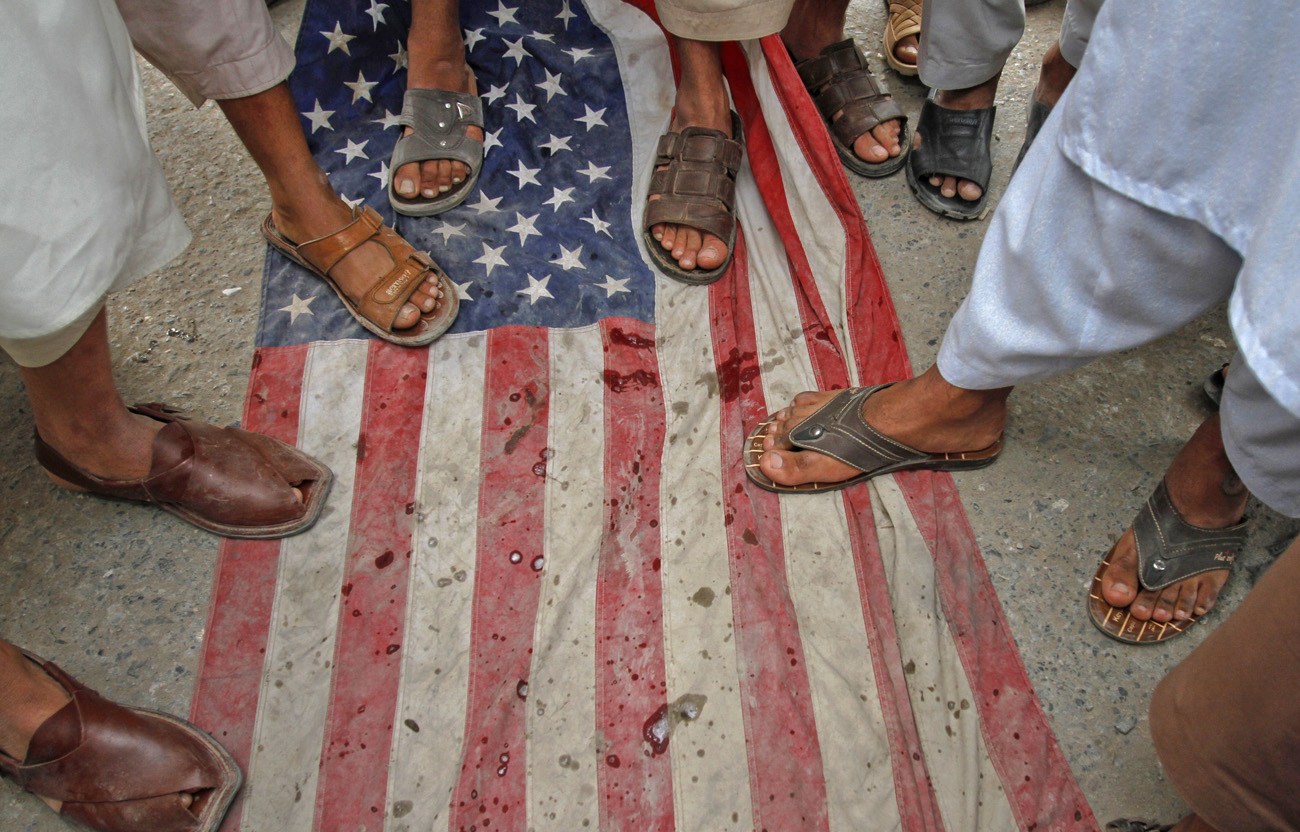 Intelligence officials told Reuters that US drone strikes killed 10 suspected militants in north Waziristan in the northwestern part of Pakistan early on Thursday. This will likely further hurt fragile negotiations between the US and Pakistan over supply routes into and out of Afghanistan, particularly through the port at Karachi.
Reuters, Xinhua

A Tunisian prosecutor called for the death penalty for former president Zine al-Abidine Ben Ali for his role in the deaths of more than 300 demonstrators during the country’s Arab Spring protests last year. Ben Ali, who now lives safely tucked up in Saudi Arabia after his 23-year reign, has already been sentenced, in absentia, to bucketloads of jail time on charges relating to activities when he was running the country, such as corruption and torture. He still faces further charges which can carry the death penalty, although Tunisia rarely uses it.
Al Arabiya, CNN

A report released by the Brazilian sports ministry said on Wednesday that 41% of the planned infrastructure projects related to the 2014 Fifa World Cup have not yet seen spade in ground. Allegedly, stadiums are all progressing as expected, but airport upgrades and other less than adequate transport facilities are stagnant – some remain in the planning stage. Sports minister Aldo Rebelo said on Wednesday, however, that in spite of all the regulation concerning government projects “nothing will be left undone due to [legal] requirements”.
Bloomberg, AP

Ernie Els was one of 24 golfers to earn full exemption to the US Open next month due to their world rankings. Els won the tournament in 1994 and 1997, and should be pretty chuffed to make a return to the majors after missing The Masters at Augusta National earlier this year. Other confirmed entries announced on Wednesday include Paul Casey, Thomas Bjorn, Miguel Angel Jiminez and Robert Karlsson.
AFP, Sport24

England batsman Kevin Pietersen was fined an undisclosed amount by his country’s cricket board on Wednesday for disparaging comments he made on Twitter about commentator Nick Knight. This sadly sets a precedent, and most likely means New Zealand cricketers will have to stay mum on precisely what they think of Danny Morrison. Pietersen’s offensive tweet, which we will publish in all its glory, so skip to the next story if you are easily offended, was “Can somebody PLEASE tell me how Nick Knight has worked his way into the commentary box for Home Tests?? RIDICULOUS!!” We assume the fine was for his use of random capital letters and multiple punctuation marks.
Telegraph, BBC

Brett Murray’s “The Spear” (now known as “The Smear”), a painting of President Jacob Zuma with his penis hanging out, will see its day in court in spite of being defaced on Tuesday. The ANC has filed an application to have the painting removed from the Goodman Gallery, and have a picture of the work deleted from the City Press website.

Moeletsi Mbeki will deliver a lecture at Wits at 17:00 entitled “What has the ANC achieved in nearly two decades?”. There will be headlines.

The South African Reserve Bank’s monetary policy committee will announce the its repo rate decision which will be carried live from 15:00 on SABC3, eTV and CNBC Africa.

Remember Damien Hirst’s diamond encrusted skull that sold for a reported £50-million in 2007? Well, a sketch of it, by the artist, doodled on the back of a poster is going under the hammer in the UK today, and is expected to go for at least £6,000.

The Democratic Alliance will present its position on the Traditional Courts Bill in Parliament at 12:30.

Three men were charged with malicious damage to property at the Goodman Gallery on Tuesday. Two were charged for defacing the controversial painting of President Zuma. One was charged for his unfinished graffiti on the gallery fence. What followed was a bizarre attempt to deceive journalists and co-opt the suspects.

Egypt: All hail the Arab Spring

When Egypt goes to the polls to elect a new leader, it will be a triumph for the Arab Spring. It will be a victory for the sheer will of a people. Yet, even as Egyptians enjoy the fruits of their spring, however bitter the fruits may yet be, what exactly did happen to the great promise of the Arab Spring?

Youth employment in South Africa is a powder keg, and the sense of amonie felt by youths as a result of joblessness could prove the spark that sets it off. While key decision-makers recognise the problem, much of the wrangling has been over what to do about it. A programme run by the Western Cape economic development and tourism department appears to provide a sound example.

The trial has reached its inevitable conclusion. The killer will be sentenced. His young accomplice will walk away. The victim’s wife and followers will mourn. And we will never know exactly what happened.

There’s no doubt that the majority of the Netanyahu administration’s policies with respect to the Palestinians in their midst are unconscionable. But to effectively attack the Israeli government, the mainstream media in this country – and the left-leaning media in the West – need to be consistent. Unfortunately, the media’s double standards sometimes smack of the very racism of which they accuse others.

Billionaire philanthropist George Soros’s Open Society Foundation is hosting a pan-African conference in Cape Town this week aimed at tackling Money, Power & Sex: The paradox of unequal growth. The message coming out of the Money session was focused heavily on African self-reliance, and suspicion of others.

Brainstorm: The state of income inequality in South Africa

As a developing country, South Africa looks to the developed world for ideas of how to grow. It’s important, then, that when the developed world realises and admits it’s made mistakes, we adjust what we do. That was economic development minister Ebrahim Patel’s reasoning in convening a panel on income equality.

Publishers are looking for new ways to package content to appeal to mobile consumers, while newspapers want to turn print into digital for tablet and mobile users. Made by locals, Snapplify has stepped into this breach with a turnkey content solution that’s getting noticed globally by venture capitalists and larger, acquisitive players in the content industry.

On Monday morning, things were looking up for Mali. By Monday night, the interim president Dioncounde Traore had just been beaten up in his office after a massive and genuine public demonstration in favour of the military junta, leaving the country more confused and unstable than ever before.

DRC: Not much has changed in the east

Deals have been made between President Joseph Kabila and the CNDP rebel forces, but their integration into the army hasn’t worked. Some are unhappy about the slow process, others have broken into splinter groups. And those on the ground continue to suffer.

The Global Alliance for Clean Cookstoves showed off some of its latest products in Johannesburg recently. Daily Maverick reporter J BROOKS SPECTOR took a look-in at some of these new stoves designed to help save the planet – at least according to their manufacturers and sponsors.

For the West Indies, failure to get over the line has been synonymous with success for too long. They need some serious changes, fast, and they can start by accepting their shortcomings publicly, writes ANT SIMS.

Jacques Rousseau: ‘I see a red door and I want it painted black’

Released almost 50 years ago, the Mick Jagger/Keith Richards song Paint It Black was “cut as a comedy track” said Richards. In the breathless shoutathon about the now-defaced painting of Zuma (the black guy) by Murray (the white guy), almost every facet of South Africa’s kaleidoscopic cacophony of opinions has been defaced in some way. We are not the better for it either.

Photo: Men step on a U.S flag during an anti-American rally organized by Shabab-e-Milli, the youth wing of the Jamaat-e-Islami party, in Peshawar April 13, 2012. Pakistan’s parliament on Thursday unanimously approved recommendations from its national security committee on ties with the United States, including a demand to end drone strikes. REUTERS/Fayaz Azi.