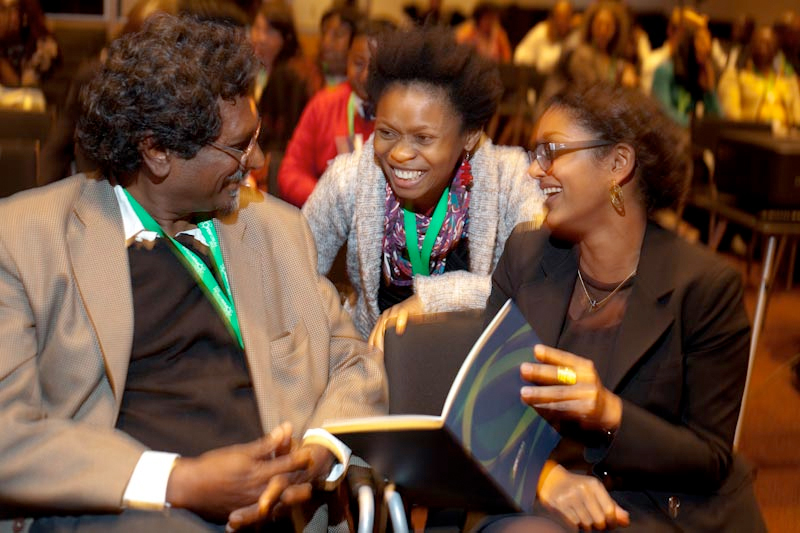 Billionaire philanthropist George Soros’s Open Society Foundation is hosting a pan-African conference in Cape Town this week aimed at tackling Money, Power & Sex: The paradox of unequal growth. The message coming out of the Money session was focused heavily on African self-reliance, and suspicion of others.

The money, power and influence behind Soros’s foundations has managed to pull a truly mouth-watering roster of speakers to Cape Town for this week’s Open Forum 2012. It’s a who’s who of African activists, artists, academics and political figures, with everyone from ex-Mozambiquan President Joaquim Chissano to Nigerian singer Femi Kuti scheduled to take the microphone at some point.

The way the programme is laid out requires you to make some fairly agonising decisions: do you want to hear discussions about the genocide against the San, West African civil society, or students and sexual consciousness? It’s like a Utopian vision of the African Union.

But the feel-good Pan-Africanist philosophy that seems to underpin proceedings, as appealing as it is, becomes conceptually confusing at points. Especially in the context of the first day’s topic, ‘Money’, it became increasingly clear that to talk about economics or development in a way relevant to the entire continent meant talking in exceedingly broad brushstrokes.

Sisonke Msimang, executive director of the Open Society Initiative for Southern Africa, stressed in her welcome address that there was no hidden agenda to the talks and that discussions would be open-ended: “We resisted the urge to tie this meeting to a particular outcome,” she explained.

The results were a day of conversations ranging from the extremely invigorating – such as the opening plenary session on financing Africa’s development – to the more tepid: a second plenary on the involvement of global institutions in Africa.

But it was also a day of grappling with the question of what was meant by ‘Africa’, probably the most frequently used word of the day. A Pakistani questioner in the first plenary summed it up: as a South Asian, she said, she was intrigued by the presentation of a “homogenous geography” to Africa. Was this merely an “imagined” geography?

The answer to that would surely have to be yes. Delegates from South Sudan sat next to Nigerians while Egyptians rubbed shoulders with Tanzanians. Present in the room were representatives from dictatorships, theocracies and liberal democracies. What held them together, beyond a shared landmass?

London School of Economics academic Thandika Mkandawire took a stab at answering that early on. “There is no continent that I know about that is painted, sung, drafted as one in the way that Africa is,” he said. “Emotionally, the sense of the continent is strong, but we have not been able to translate that into institutions.”

Later in the day, the question would be raised about how South Africa fitted into this mythologised continent – in particular, how South Africa’s often white-driven capital investments within Africa matched the template of Pan-African aims.

The picture painted throughout was of a continent gaining confidence daily, but struggling to reconcile its newfound global economic clout with growing inequality continent-wise.

“Today Africa is a place where you make money, you don’t lose money,” said Graca Machel over video link. “But Africa’s growth over the last decade has not resulted in equity.”

The spectre of the heroes of African independence was raised several times – in particular the figure of Julius Nyerere, Tanzania’s first president.

Charles Abugre, regional director of the United Nations Millennium Campaign, suggested that the independence pioneers were focused on the eradication of three social ills within Africa: “hunger, ignorance and disease”. They were not business people, Abugre said. But the role of the state has changed.

Some potential keys to fully unlocking Africa’s potential were identified variously as beefing up the agricultural production sector, expanding public-led investment, and strengthening democratic structures. “Dictators in Africa don’t do well economically. We have enough evidence of this,” said Mkandawire wryly.

One of the strongest themes throughout was a mixture of pride at Africa taking its place on the global stage, and suspicion of those who sought to do business with the continent. In terms of the first, a running leitmotif was a collective nose-thumbing at The Economist, the publication which in 2000 published its infamous “Africa, the hopeless continent” issue. But the pride of being able to do business on a global stage was repeatedly tempered by the question of whether Africa should be engaging with the global stage as much, or at all.

Mkandawire was particularly wary on the subject of foreign investment in Africa, sounding a note of caution: “Democracies which rely on external funding are choiceless democracies. No representation without taxation!” He also pointed out that the “rebranding” of Africa carried its own dangers, since it appealed to the “herd instincts” of investors who might pull out of Africa as suddenly as they arrived, spooked by what he calls the “CNN factor” – the impact of the image of Africa presented by international broadcasters.

Nkosana Moyo, vice president of the African Development Bank, was more obdurate on the topic. “We are letting ourselves by defined by others. Why do I care what the Economist thinks about me?” he asked. Moyo also suggested that the West’s concerns about China’s activities in Africa were extremely hypocritical given the West’s history on the continent, but seemed to hint that China’s intentions were just as harmful: “Africans don’t seem to realise that there is no difference between China and the West,” he said.

The issue of China in Africa came up repeatedly in general discussion, but was dealt with specifically in a session on ‘Exploding the Myths: China & India in Africa’. The title might strike you as somewhat tendentious, and indeed it appeared that the speakers’ aims were to quell any African fears by putting to bed all neo-colonialist portraits of the Asian giants.

Pang Zhongying, Professor of International Relations at Ranmin University of China, sung a particularly soothing song on the topic of China, saying that “today’s China is not yesterday’s China”. Today’s China is apparently all about human rights and modulating its foreign policy in response to international reaction.

“China learned a lot from responses from the West to China’s role in Africa,” Pang claimed. But even if it hasn’t, his position was that there was nothing to be worried about. “China’s power is exaggerated by the international community, including Africa.”

Africa-China expert Buddy Buruku pointed out that while it’s difficult to get exact figures from the Chinese government about how much business they do with Africa, it’s a fact that the bulk of these figures are from trade rather than investment, and only a tiny proportion has any job-creation potential.

Buruku urged Africans to “leverage the AU to give us the information that will help us get better deals”, saying that the asymmetry of information is what leaves Africa shafted. But her view was also pragmatic in terms of the impact of cheap Chinese goods flooding African markets. “A lot of our populations are poor. For the first time they have access to stuff,” she reminded the audience. “That’s bittersweet, but it’s something tangible.”

Session moderator Deprose Muchena pointed out that it is usually China fingered as the African bogeyman, rather than India: the common understanding of Chinese and Indian investment in Africa is that “China is bad, India is good”. But India’s influence on the continent is also growing – Buruku brought out the statistic that, in 2010, a third of the highest value acquisitions on the continent originated from Indian capital. Why don’t we worry about India the way we worry about China?

“India has a softer image because of the role it played in leading the anti-colonial drive,” posited Aniket Alam, an editor on India’s Economic and Political Weekly. “India tries to use the legacy of political friendship with ex-colonies.” Alam claims there is zero interest among the general public in India about India’s interests in Africa. “We’ll deal with any regimes,” said Alam. “Uber-realism defines Indian foreign policy.”

But he too was at pains to stress that the rumours of India’s importance in Africa were greatly exaggerated. “The first myth to explode is the importance of China and India in Africa,” Alam maintained. “They’ve only been involved for one or two decades. The big elephant in the room is the 150-year history of the West in Africa, and that the economic and political importance of the West is declining.”

That may be so, but judging from the first day of Open Forum, a preoccupation with the West – and the West’s view of Africa – is still a prominent feature of contemporary African discourse, continent-wide. DM