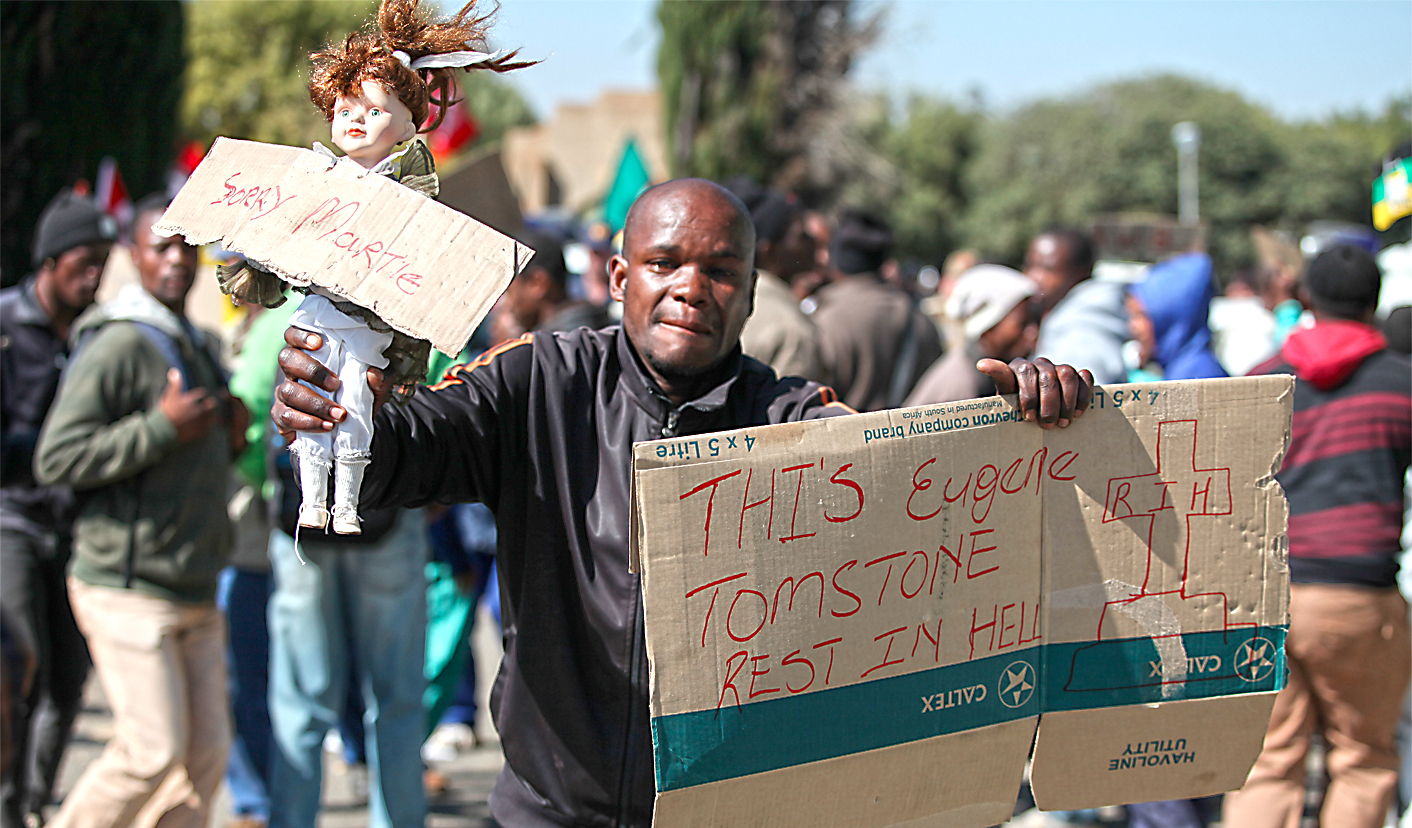 The trial has reached its inevitable conclusion. The killer will be sentenced. His young accomplice will walk away. The victim’s wife and followers will mourn. And we will never know exactly what happened.

It ignited the fears of hundreds of right-wing white supremacists, who were convinced that the brutal killing was part of a political plot aimed at decimating white Afrikaners in a racial genocide.

They drove in their bakkies, flying old South African and AWB flags, tears streaming down their faces as they watched Terre’Blanche’s coffin lowered into his grave. They arrived in droves at the first court appearance of Terre’Blanche’s accused killers, screaming vengeance at the black members of the Ventersdorp community – who screamed back at them across barbed-wire barriers erected by police.

Two years later, the hundreds have dwindled to dozens. They stand outside the Ventersdorp Circuit Court on Tuesday dressed in military uniforms, half-heartedly chanting “AWB, AWB, AWB”. They occasionally scuffle with the black supporters of Terre’Blanche’s accused killers. But, mostly, they look. Lost. Photo: Members of the Afrikaner Resistance Movement (AWB) react as supporters (not pictured) of the two men accused of hacking South African white supremacist leader Eugene Terre’blanche to death, chant slogans outside the South African court where the verdict of the case was being heard, in Ventersdorp, in North West Province May 22, 2012. (REUTERS/Siphiwe Sibeko).

The man who killed Terre’Blanche, Chris Mahlangu, wasn’t a genocidal monster or a politically driven assassin. He was a half-starved farm worker who, in the end, chose not to explain why he beat Terre’Blanche to death.

Instead, he said he was sorry.

“Eugene Terre’Blanche? I’m feel bad. I feel very very sad, I feel sorry. I’m feeling say sorry,” he says when I ask him about how he feels about his dead boss. Photo: Chris Mahlangu during a verdict hearing of the case at a South African court in Ventersdorp, May 22, 2012. (Jordi Matas).

He repeats those words, saying he will “feel very bad” if judge John Horn imposes a life sentence for his brutal murder and robbery of Terre’Blanche. But he shrugs when I ask him what sentence he hopes the judge will give him.

“I don’t know,” he says, after telling me “my life has changed, you can change a life. I can change life now”.

His words strangely echo those of his teenage co-accused, Patrick Ndlovu, when I ask him what he wants to do with his life following his acquittal.

“I want to change my ways and be a good boy,” he says, in apparent reference to his previous and current house-breaking convictions. Photo: Attorney Zola Majavu (R) gestures to Patrick Ndlovu, one of the accused in a murder case of white supremacist and Afrikaner Resistance Movement (AWB) leader Eugene Terre’blanche, during a verdict hearing of the case at a South African court in Ventersdorp, May 22, 2012. (REUTERS/Siphiwe Sibeko)

Horn found that Ndlovu had broken into Terre’Blanche’s farm house with the clear intention of stealing from him, but he could not find that the then 15-year-old was an active participant in Terre’Blanche’s murder. Crucial to that finding was the complete absence of Terre’Blanche’s blood on Ndlovu’s clothes, which, according to blood-spatter expert, Captain Ian van der Nest, would have been spurted with Terre’Blanche’s blood if he was in the crime-scene bedroom.

Ndlovu’s decision to remain silent in the aftermath of the murder – and his defence’s carefully crafted attack on the way in which police had obtained a highly incriminating statement from him – arguably saved the angel-faced youngster from a murder conviction. As did Mahlangu’s decision not to testify and potentially implicate the teenager.

While the National Prosecuting Authority says it is bolstered by Ndlovu’s house-breaking conviction, it seemed to be of little comfort to Terre’Blanche’s family. His widow, Martie, appeared close to tears as Horn delivered his verdict against the two workers she claimed her husband had loved and cared for.

She may have been heartened by Horn’s finding that Mahlangu’s sodomy claims against her husband were “absurd”. But she, like everyone who watched this strange and tragic case unfold, still has little sense of what drove the killing. And she probably never will.

I ask Mahlangu how prison compares to life on the Terre’Blanche farm.

Prosecutors maintained throughout this trial that a pay dispute drove Terre’Blanche’s murder, calling witness after witness to testify about how Mahlangu would tell anyone who would listen that he had killed his boss over money.

He was paid R650 a month, the state argued. Witness evidence suggested that he wanted the money so that he could go home for Easter. When he didn’t get it, he unleashed his rage on his boss – and ignited fear and loathing on the quiet town of Ventersdorp.

It’s a beautifully simple narrative. If you can believe it.

The first time I saw Mahlangu, he desperately tried to hide his face. He cowered in the dock, pushing his head between his legs. Now, two years later, he looks straight at me when I ask him if he’s happy.

Dressed in clean clothes, well-nourished and clear-skinned, he smiles and shrugs.