'X' marks the blot as Zuma painting defaced in front of... 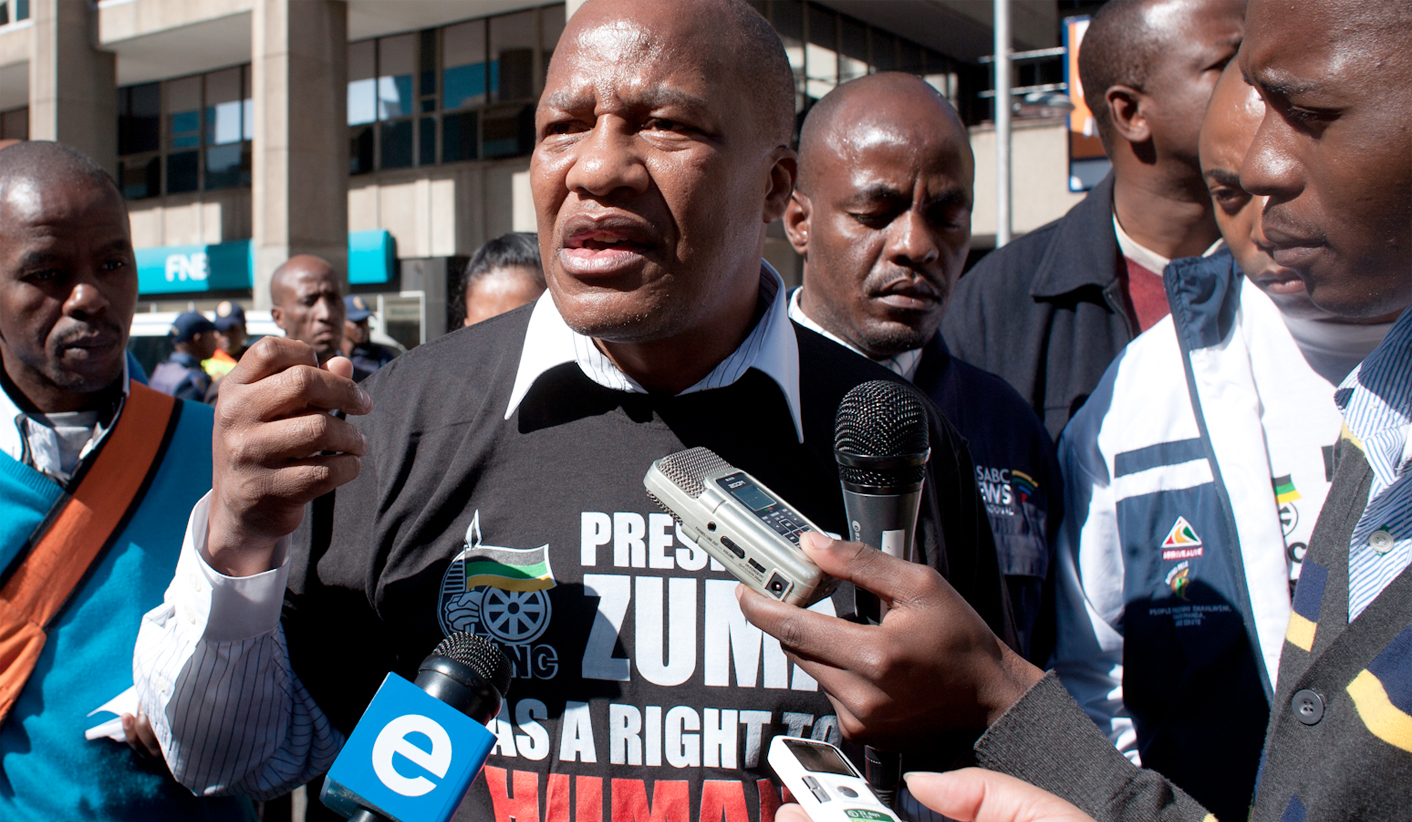 After captivating the country’s imagination, Brett Murray’s Spear painting of President Jacob Zuma was dramatically defaced on Tuesday – while the ANC gathered a few kilometres away in Johannesburg to have the painting banned.

A group of Grade 11 pupils from the My Tutor Centre, Johannesburg, entered the Goodman Gallery like everyone else. They were divided into small groups and let in at a trickle. Security was heavy in the car park, but they say only one guard was at the door and one guard inside the gallery.

The guards glanced into their schoolbags and frisked the boys. Their teacher had a water bottle in her handbag, which was no problem to get in. It wouldn’t have been hard to smuggle something in, she told Daily Maverick after the incident.

The kids saw a middle-aged white man (an art professor from Tshwane University of Technology) walk up to The Spear of the Nation, Murray’s contentious and revealing painting of Zuma. He drew a red cross over Zuma’s face and another cross over his genitals.

“Is he supposed to be doing this?” wondered the teacher. The man was so calm it looked as if his actions could have been a part of the show, she thought. He stepped aside and no one stopped him. With a shirt and suit jacket he looked like any other resident of Parkwood, the Johannesburg suburb where the Goodman Gallery is located.

“How could you do that? Who are you?” came a voice from the back.

A younger black man then stepped up to the painting and threw black paint over the canvas, leaving black and red paint smeared over the image of Zuma depicted in the imitation of Joseph Stalin, but with his genital revealed.

Some attendants tried to stop him before security guards finally arrived, and manhandled the young man who put up no real resistance. Nonetheless, one of the guards head-butted him and then body-slammed him to the ground.

The teacher said, while the guards were attacking the young man, the first defacer simply stood quietly by, watching and acting as if he wasn’t part of the crime. Members of the media were visiting the gallery by chance.

eNews senior anchor Iman Rappetti grabbed hold of the older man and asked him why he was there, where he was from and what was he doing. Blankly, he told her, “I’m not going to tell you.”

Security personnel eventually took both men to the guardhouse until police arrived and took them to the Rosebank Police Station.

The media flocked to the scene from the South Guateng High Court and a debate started outside the gallery. A man with an ANC flag said South Africans had too many freedoms and didn’t know how to handle them. Another disagreed.

Riot police cordoned off the High Court as about 100 ANC supporters gathered while the party filed papers to have the Goodman Gallery remove the painting and City Press withdraw it from its online site.

“We say no to abuse of artistic expression,” read the official placards. Some handwritten signs demonstrated how racialised the issue has become. Another read, “That was below the belt. Apologise. He is a father, husband and leader. Respect or go!”

Facing media wearing a “President Zuma has a right to human dignity” T-shirt, the ANC spokesperson Jackson Mthembu said it was wrong that the painting depicting Zuma’s genitals had been seen by children and showed a lack of respect. He said he even heard that some white parents had been at the gallery laughing at the painting.

After hearing that it had been defaced, ANC secretary general Gwede Mantashe addressed the crowd. He disapproved of the criminal action, but said they had never liked the artist’s depiction. The ANC would continue with its case on Thursday despite what had happened at Goodman. DM

Photo: ANC spokesman Jackson Mthembu called on SA to respect the president and said white parents had taken their kids to view the painting of Zuma and were laughing as a family.