‘The Second Sexism’ – discrimination against males 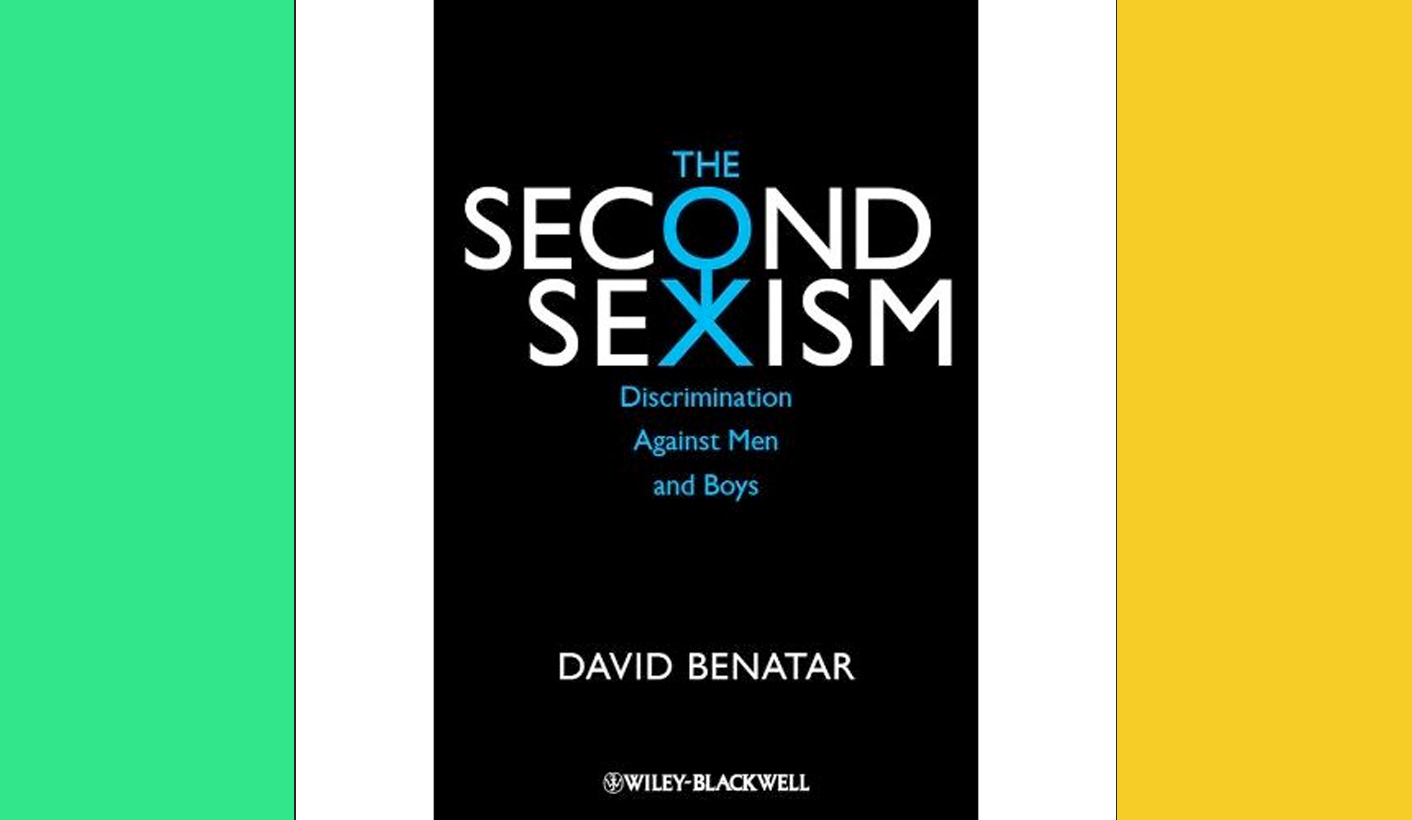 Philosopher David Benatar is a victim twice over. For starters, he is a man – and the thesis of his latest book, The Second Sexism, is that males are subjected to “many and quite serious forms of sex discrimination”. Secondly, there’s the fact that he says his book keeps being wilfully misunderstood by the media.

Professor David Benatar, head of the Philosophy Department at UCT, is no stranger to controversy. In fact, judging by the topics of his books, he actively courts it.

In 2006 he brought us Better Never to Have Been: The Harm of Coming into Existence, a highly provocative work which argues, as is suggested by its title, that it is preferable for individuals not to have been born.

This year sees the publication of The Second Sexism: Discrimination Against Men and Boys, which is barely available anywhere and is already causing a massive stir.

Benatar takes the title for his work from French existentialist Simone de Beauvoir’s The Second Sex (1949), one of the most important works in feminist philosophy. It’s probably safe to say that De Beauvoir wouldn’t be greatly chuffed about the hat-tip. Throughout her book, De Beauvoir wrestles with the question of why men and women are the way they are, but concludes that no matter which group is inherently superior, it is quite clear that the situation for a man is “infinitely preferable”.

Admittedly, that was over half a century ago, but Benatar doesn’t agree. His thesis holds that, although women are discriminated against and sexism against women is widely acknowledged, few people take seriously the possibility that men are also discriminated against – which Benatar sees as fact.

As evidence for sexism against men, he advances a number of different examples. One of his strongest ones is the issue of military conscription: it is virtually unheard of for women to be forcibly conscripted into a country’s armed forces, whereas this is common for men.

“Men are also more often the target of aggression and violence of a non-sexual kind,” says Benatar. “In experimental studies, they’ve found that both males and females are more likely to inflict violence on males than on females. There are less inhibitions about inflicting violence on males.”

More men are murdered and assaulted than women, and most war-related deaths are male, he says. At South Africa’s Truth and Reconciliation Commission, there were six times as many male victims as females.

What about the idea that men are better able to protect themselves against violence? Again, Benatar’s not biting. “Even if you think that’s true on average, it’s not going to be true in all cases.” He points out that in the case of murder, the male victims were clearly not able to defend themselves sufficiently.

Benatar thinks there are other spheres in which men get sacrificed and women get protected – such as in the old adage of ‘Women and children first’, when it comes to shipwreck etiquette, which he finds “inappropriate”. When it comes to capital punishment, he says there is “clear evidence of bias” towards putting men to death but not women. He cites the state of Virginia, where no women has been put to death in 100 years, despite the state having the second highest capital punishment rates in the US.

Then there’s the issue of sexual assault. While he acknowledges that women are the primary victims of sexual violence, Benatar says men are nonetheless subject to discrimination in this area as well. He gives as an example the fact that some countries do not acknowledge the possibility of male rape under law. In other countries, penalties for sexual assault of males are less serious than female assault, and he cites studies which show there is less sympathy available for male sexual assault victims. (It’s hard not to think of South Africa’s infamous Pappa wag vir jou drunk-driving ad in this regard.)

All these examples seem like strong evidence for Benatar’s thesis. Others he advances are more contentious, however. He finds it hypocritical that people get “very exercised” about female circumcision, but the decision to circumcise baby boys, often without anaesthetic, is uncontroversial. It was pointed out at Monday’s seminar that the two are virtually incomparable in terms of pain, scale and long-term effects, but Benatar says he addresses this argument in more detail in his book.

He also points to the fact that more boys drop out of school and fail to graduate than girls as evidence of some discriminatory elements in the education system. Again, this point is likely dealt with in fuller detail in his book, but a whole platter of statistics would seem to counter the idea that boys are disadvantaged within education – not least the fact that, according to a World Bank study from last year, 66% of the world’s illiterate adults are women. The same study found that “in many countries of South Asia and sub-Saharan Africa, girls are still much less likely than boys to attend, much less complete, basic education”.

Benatar also seeks to use the discrepancy between the treatment of gay men and lesbians as evidence for discrimination against men. He says there are many jurisdictions in the world that criminalise male sexual acts but not lesbian sexual acts. He also contends that there are more acts of “gay-bashing” perpetrated against gay males than lesbians. While this latter statistic may hold, in both cases the reason for the alleged preferential treatment meted out to lesbians is surely also because they are simply less visible, not necessarily more accepted.

The Torah, for instance, prohibits man-on-man sexual relations without a comparable proscription against lesbian sex – not because women were allowed to have sex with women, but probably because it takes for granted that men are the principle actors during sex.

Benatar’s argument also seems frustratingly divorced from economic and political realities in some ways. In an interview with the Observer, he said: “It’s true that in the developed world the majority of economic and political roles are occupied by males. But if you look at the bottom – for example, the prison population, the homeless population, or the number of people dropping out of school – that is overwhelmingly male. You tend to find more men at the very top but also at the very bottom.”

For a start, that very fact surely suggests a social and economic mobility unavailable to women in the same way. Secondly, if Benatar is saying that the fact that some men are better off than some women is not enough evidence to prove that women have it worse, then the opposite has to hold too – the fact that some men have it really, really bad, by that logic, doesn’t prove a wider disadvantage either.

Taken on average – a viewpoint which Benatar seems curiously allergic to – the fact still remains that women produce 66% of the world’s work in exchange for 10% of its income, and own only 1% of the world’s property. Call me a “partisan feminist” – Benatar’s term for feminists only concerned with women’s rights, not equal rights – but it’s hard to see a whole heap of generalised male disadvantage in those figures.

Benatar says that The Second Sexism has been “wilfully misunderstood” by some commentators thus far. Guardian columnist Suzanne Moore was particularly scathing about the idea advanced by the book, calling it “tripe”. Benatar, she wrote, “ends up asking if we need affirmative action for men. We already have it. It’s called the status quo.”

British feminist Julie Bindel was also uncompromising in her response, labelling the notion “total and utter bullshit. There are areas where men are paying the price that male supremacy gives them – there’s absolutely no doubt about that… The reality is that the public domain belongs entirely to men and the disadvantages they face are just the price they pay. It’s tough cheese.”

If all Benatar is arguing is that some men experience discrimination in some ways, however, that seems relatively uncontroversial. He makes the point that his argument should even be “congenial” to feminists, since it highlights the fact that current constructions of gender roles limit and oppress men as well as women. His views do seem to have been misconstrued in a tendentious way, since Benatar does acknowledge that women still experience greater general discrimination.

But it’s easy to see why his ideas would cause anger from women. It’s still a world where being disadvantaged by virtue of gender may be sewn into the fabric of a woman’s everyday reality, as opposed to part of a philosopher’s thought experiment.

That was 1949. More than 60 years later, none of those rights are yet universally enshrined. So perhaps it’s premature to start worrying too much about the “second sexism” when the first one seems so prevalent still. DM

Photo: The cover of The Second Sexism.