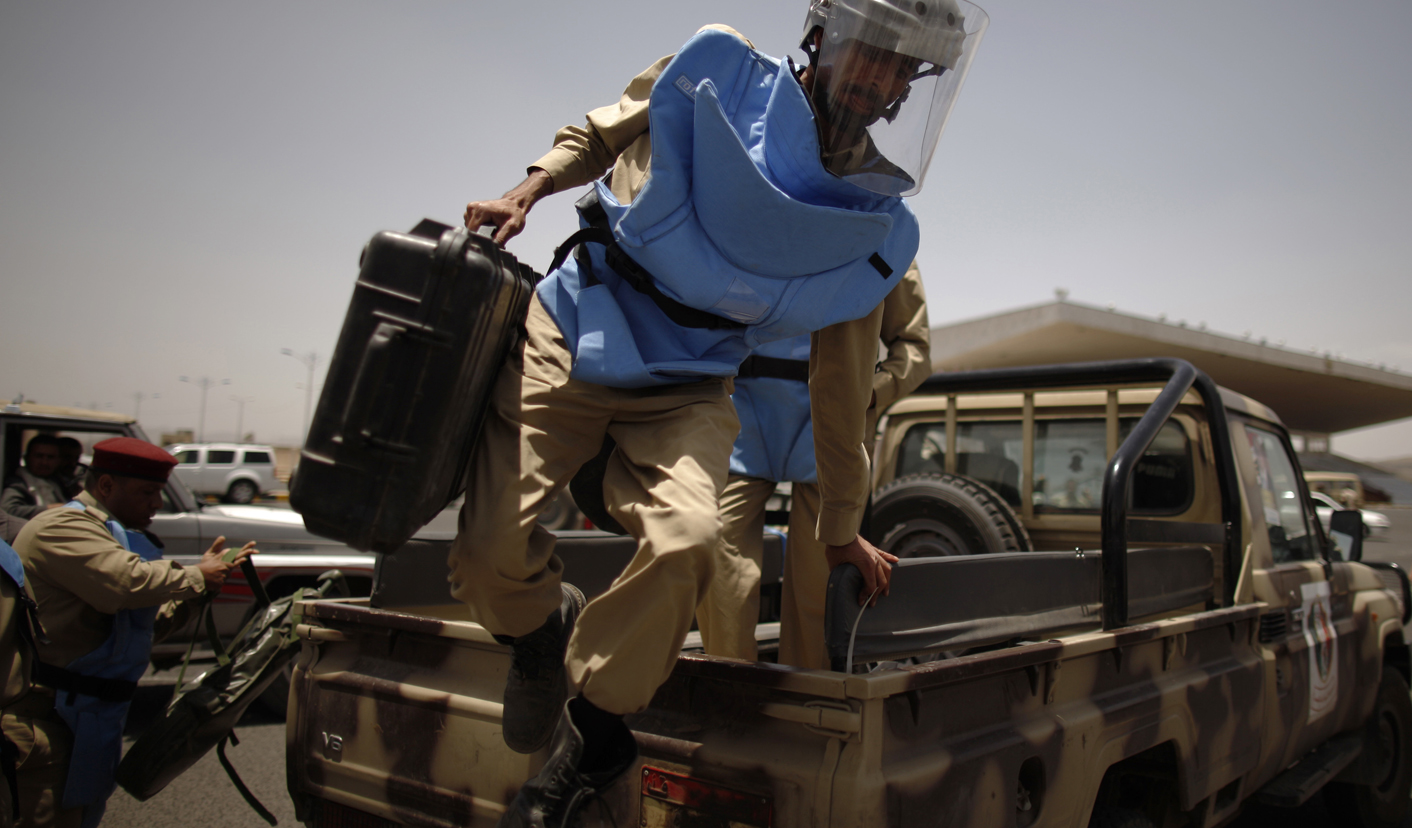 A suicide bomber in army uniform killed more than 90 soldiers in the heart of the Yemeni capital on Monday and an al Qaeda affiliate threatened more attacks if a U.S.-backed campaign against militants in the front-line state did not stop. By Mohammed Ghobari and Tom Finn

The bombing, which wounded more than 200 people, underscored the dangers Yemen faces as it battles Islamist militants entrenched in the south and threatening shipping lanes in the Gulf of Aden and the Red Sea.

It left scenes of carnage in Sanaa’s Sabaeen Square, where the military had been rehearsing for a parade. Body parts lay strewn across a 10-lane road not far from the presidential palace.

“We had just finished the parade. We were saluting our commander when a huge explosion went off,” said soldier Amr Habib. “It was a gruesome attack. Many soldiers were killed and others had their arms and legs blown off.”

Hadi, who took over after Washington and its Saudi-led Gulf Arab allies persuaded his predecessor to step down to prevent an uprising spreading anarchy in Saudi Arabia’s neighbour, vowed to step up the fight against militant strongholds in the south.

“The war on terrorism will continue until it is uprooted and annihilated completely, regardless of the sacrifices,” Hadi said, according to a text published by the state news agency.

One investigator said preliminary findings suggested the bomber was a rogue soldier who had somehow evaded security checks rather than a man in a disguise.

“The suicide bomber was dressed in a military uniform. He had a belt of explosives underneath,” said a man who identified himself as Colonel Amin al-Alghabati, his hands and uniform flecked with blood.

The defence ministry said at least 90 soldiers had been killed and 222 people wounded. The al Qaeda affiliate said it had targeted the defence minister and army commanders.

The defence minister and chief of staff were both at the rehearsal for Tuesday’s National Day parade — meant to celebrate Yemeni unity – but neither was hurt. Yemeni officials said Hadi had moved Tuesday’s parade to a military academy.

The wounded were ferried to hospital in taxis.

“Most of the injuries are to the head, we have dozens paralysed. We expect the death toll to rise. Most of the injured here are boys in their teens. Sanaa’s hospitals are overwhelmed,” said doctor Mohsen al-Dhahari.

Washington is increasing its military support for Hadi’s government and the U.S. military has targeted militants in Yemen with drones, which have frequently killed civilians and are deeply resented by Yemenis, even the many who abhor al Qaeda.

Medical aid charity Medecins Sans Frontieres (MSF) said many civilians had been hurt in the latest fighting in the south.

A U.S. military instructor was seriously wounded in an ambush on Sunday claimed by militant group Ansar al-Sharia (Partisans of Islamic Law), which is affiliated to al Qaeda in the Arabian Peninsula (AQAP).

The AQAP also claimed responsibility for the military parade suicide attack, saying it was in response to the “crimes” of the security forces in Abyan.

“We will take revenge, God willing, and the flames of war will reach you everywhere,” it said.

In response to the violence, Hadi sacked two senior commanders and allies of Saleh, whom he replaced in February. One of them, a nephew of Saleh, was the head an intelligence gathering unit that works closely with the CIA.

The army splintered into pro- and anti-Saleh camps during last year’s revolt, hampering the campaign against militants.

“Hadi is serious about the confrontation, but he does not have a grip on the whole security apparatus, security services and the army in order to succeed,” said Saeed Obaid, a Yemeni researcher of Islamist groups.

Monday’s bombing was the most deadly in a spate of attacks in the impoverished state since Hadi, Saleh’s deputy, took over from him in a process meant to end in democracy.

Analysts said it was hard to see how one attacker could have caused so many casualties.

“The scale of the carnage certainly raises many questions … but this is clearly a major security breach and I suspect this attack took a long time to prepare,” said Henry Wilkinson, head of analysis at the Risk Advisory Group consultancy.

Saudi intelligence services said earlier this month they had foiled a plot by al Qaeda’s Yemen-based wing to arm a suicide bomber with an improved version of an “underwear bomb” of the type that failed to explode on a 2009 U.S.-bound flight.

One analyst said the device used on Monday is unlikely to have been a version of the underwear bomb, which appears to be a comparatively small, high-tech device intended to cause a puncture in the body of an airliner.

Jeremy Binnie, Middle East/Africa editor of Jane’s Defence Weekly, added that the high death toll on Monday may have been due to the fact the troops were in ranks, not crowded together.

At least seven militants and seven soldiers were killed on Monday when Islamist fighters attacked an army position near the southern town of Zinjibar, residents and an official said.

Yemeni troops closed in on the southern militant-held town of Jaar on Sunday in heavy fighting, part of a new U.S.-backed offensive launched earlier this month to regain control of territory and towns seized by Ansar al-Sharia. DM

Photo: An explosives expert jumps from a military truck as he arrives at the site of a suicide bomb attack at a parade square in Sanaa May 21, 2012. A uniformed man blew himself up in the midst of a military parade rehearsal attended by senior officials in the Yemeni capital Sanaa on Monday, killing at least 41 people and wounding more than 60, a police source said. REUTERS/Khaled Abdullah