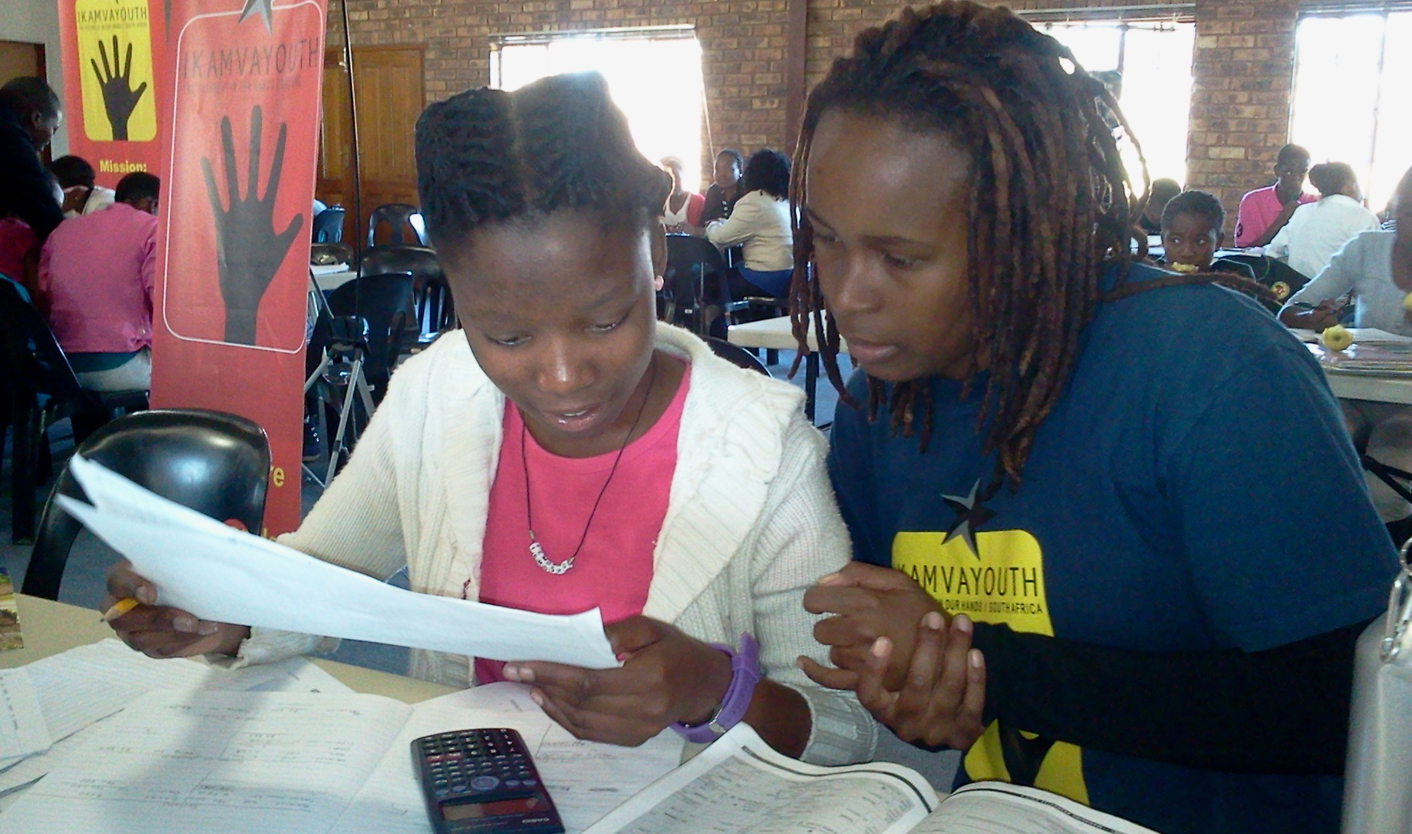 If you are a pupil who is going to sit for the matric exam in Tembisa near Midrand, the odds of getting into university are stacked against you. Fortunately, there’s an organisation that’s changing the fortunes of hundreds of youngsters in Tembisa and beyond. It’s called IkamvaYouth and they’re teaching pupils to work hard, take responsibility and start believing in themselves.

The year was 2010 and teachers, most dressed in trademark red Cosatu T-shirts, took to the streets of Johannesburg with vuvuzelas blaring. Police fired teargas and rubber bullets, while teachers threw rocks and stones. This was the beginning of the South African Democratic Teachers’ Union’s “full scale indefinite strike” over wages, which brought a total shutdown to local schools. The result for pupils was devastating.

“My marks were very low. I was getting between 30% and 50% – which was my highest mark – when the teachers’ strikes were on,” says Tembisa pupil Shelton Chadya, who realised he needed helped fast or he wouldn’t make it through Grade 11. Photo: Shelton Chadya, a student at Wits who now tutors for IkamvaYouth.

He asked around and found out about a programme run by IkamvaYouth that assists pupils in Grades 10, 11 and 12 to do better at school so as to gain university access.

“I started at Ikamva in Grade 11, right in the middle of the strikes. At the end of the same year, after joining Ikamva, I wrote my exams and I got 96% for accounting,” says Chadya.

“What changed for me is the willingness of the people at Ikamva to help and the extra work that I was willing to put in. You can take your academic problems to these people and they teach you how to solve it for yourself – how to come to the solution on your own,” he says.

Chadya’s story is typical of most people who aren’t in an expensive private school, or who aren’t lucky enough to be born in an area where a school is very good.

Only “5% of South Africans will get an education as good as anywhere else in the world,” says Andrew Barrett of IkamvaYouth, who adds: “15% is satisfactory and, if you are on your game, you will still do well. The remaining 80% is dysfunctional and we see the results of that in communities like Tembisa.” It is a chilly Saturday and Daily Maverick is at a Methodist hall in Ebony Park, Tembisa, to find out how IkamvaYouth is able to work with students like Chadya. We are here to see how this non-profit helps students radically increase their grades so that they are able to gain access to university or colleges that help them get better jobs and contribute more actively to this country’s economy.

Research released earlier this year by the South African Institute of Race Relations showed that only 1 in 3 pupils who were in grade 10 in 2008 (about 34%), went on to pass matric. Of that 34%, only a third gained admission to university. The institute says one of the biggest problems affecting the local schooling system is pupil retention, with pupils dropping out because of a lack of funds, because of family commitments or because there is a belief that school isn’t relevant. Most youngsters who drop out never return.

Against this bleak research one needs to wonder what kind of magic wand IkamvaYouth has used to get pupils to not only stay in school, but to do well enough to gain access to university.

“IkamvaYouth is a value-based organisation, so everything is based on our values,” says Barrett, who adds: “Our values include things like taking responsibility for yourself and others.”

“We take in learners every year, but to stay on the programme you have to attend at least 75% of the sessions. If you fall below the minimum 75% requirement you get kicked out. We do a big kick-out ceremony, and usually that is more for the people that are still on the programme than the people who leave. It is the hardest thing to do – no question about it. But it is really about focusing on the kids that make the commitment,” Barrett explains.

Sounds like tough love, and perhaps it is, but pupils who enrol with IkamvaYouth’s tutoring programme and who don’t shape up are given plenty of warnings. There’s a series of cautionary advisories and then comes the yellow ticket, which is basically a pupil’s last chance. If you don’t perform after that, you’re out the programme.

“What happens is that the learners really get a sense of ownership – they feel that they have earned their place on the IkamvaYouth programme, and that really speaks clearly to our culture. There are no handouts here… in any way, shape or form,” says Barret, who oversees the co-ordination of IkamvaYouth’s Gauteng programme.

“What we have been able to achieve is a culture where the people who come here realise that getting good results means a lot of hard work and dedication. That’s key to the success of the programme,” he adds.

“The learners bring the work that they need help with, rather than us working through the curriculum. The tutors are all volunteers and are people who are here because they want to be involved and to make a difference. The combination of people who are interested in these learners and of the learners themselves taking responsibility goes a long way to achieving results.”

Another aspect key to IkamvaYouth’s success is its commitment to building a democratic organisation, which saw it becoming the first South African and African organisation recognised on the WorldBlu-accredited list of the “World’s most Democratic Organisations”.

Based in the US and UK, WorldBlu specialises in organizational democracy and maintains the annual democratic workplace list, which this year has 48 companies and non-profits around the world who were honoured for unleashing human potential in the workplace through freedom, rather than fear.

Founded in 2003 by a group of UCT students who went into a Khayelitsha library to start tutoring township kids, IkamvaYouth has spread to Nyanga and Masiphumelele in the Western Cape, Ivory Park in Gauteng, as well as to the greater Cato Manor area and Molweni in KwaZulu-Natal. Each branch tutors between 90 and 100 pupils, and between 60 to 70% of the learners tutored by IkamvaYouth gain access to tertiary education.

The “success” figures given by IkamvaYouth are under-reported, says a paper conducted by the University of Stellenbosch Economics Department’s Nic Spaull and Servaas van der Berg, among others. Called Against the Odds: An evaluation of the IkamvaYouth programme it says 66% of students who get tutoring from Ikamva gain access to tertiary education, and 77% get access to post-school opportunities. The report marvels at how IkamvaYouth does what it does. “This is not an easy task, since almost all students enrolling in the programme bring with them a variety of deficits, some more severe than others,” the report reads, listing the four most common constraints as financial, social, psychological and linguistic or academic.

“Most Ikamvanites (pupils) come from township areas beset with a variety of social problems, including gang-related violence, peer-pressure, broken homes, teenage pregnancy, crime, and unemployment. All of these factors contribute to an unstable, uncertain, and unsafe environment. This instability and uncertainty means that students have many concerns other than simply succeeding in their academic careers,” the report states.

“Often there is little support from the family unit, which is in many cases all but disintegrated, and the cumulative effect of persistent crime and violence (particularly sexual violence) on the emotional well-being of children and young adults cannot be overstated. On top of these pervasive problems are placed the hopes and dreams of frustrated parents, leading to additional pressures to succeed and find a good job.”

IkamvaYouth mitigates education deficits by making up for the shortfall that’s inevitable in this kind of socioeconomic background. Most importantly, the programme provides structure and re-engineers pupil’s understanding of what is possible in their lives.

“Ikamva participants not only outperform their counterparts in matric, but do so by a considerable margin,” reads the Stellenbosch university report. “Ikamva’s short-term impact is considerable. This lies not only in the improved matric performance, but even before that in helping to create an environment where children from often very disadvantaged circumstances feel a sense of belonging and that someone cares about their needs and ambitions.”

Certainly it has changed Chadya’s life and future prospects. “Since being here I have been exposed to a lot of different career opportunities, and I decided to become a chartered accountant. I also got access to scholarships and I am now in first year at Wits University. At first I did struggle for a couple of weeks, but after that I settled down,” says Chadya.

“If I didn’t get help I wouldn’t be at university now. Education is very important. Without education we wouldn’t be able to think and to differentiate between right and wrong. To access opportunities you obviously have to be educated. At high schools the levels are very, very low and there’s very little access to information. But things are different for me now. I feel now that I believe in myself and that I am ready for anything. I feel now that I can meet any challenge,” he says.

And with that Chadya returns to the hall where about 100 Tembisa students have spent the morning studying with volunteers, just like him. DM

All photographs by Jon Pienaar.