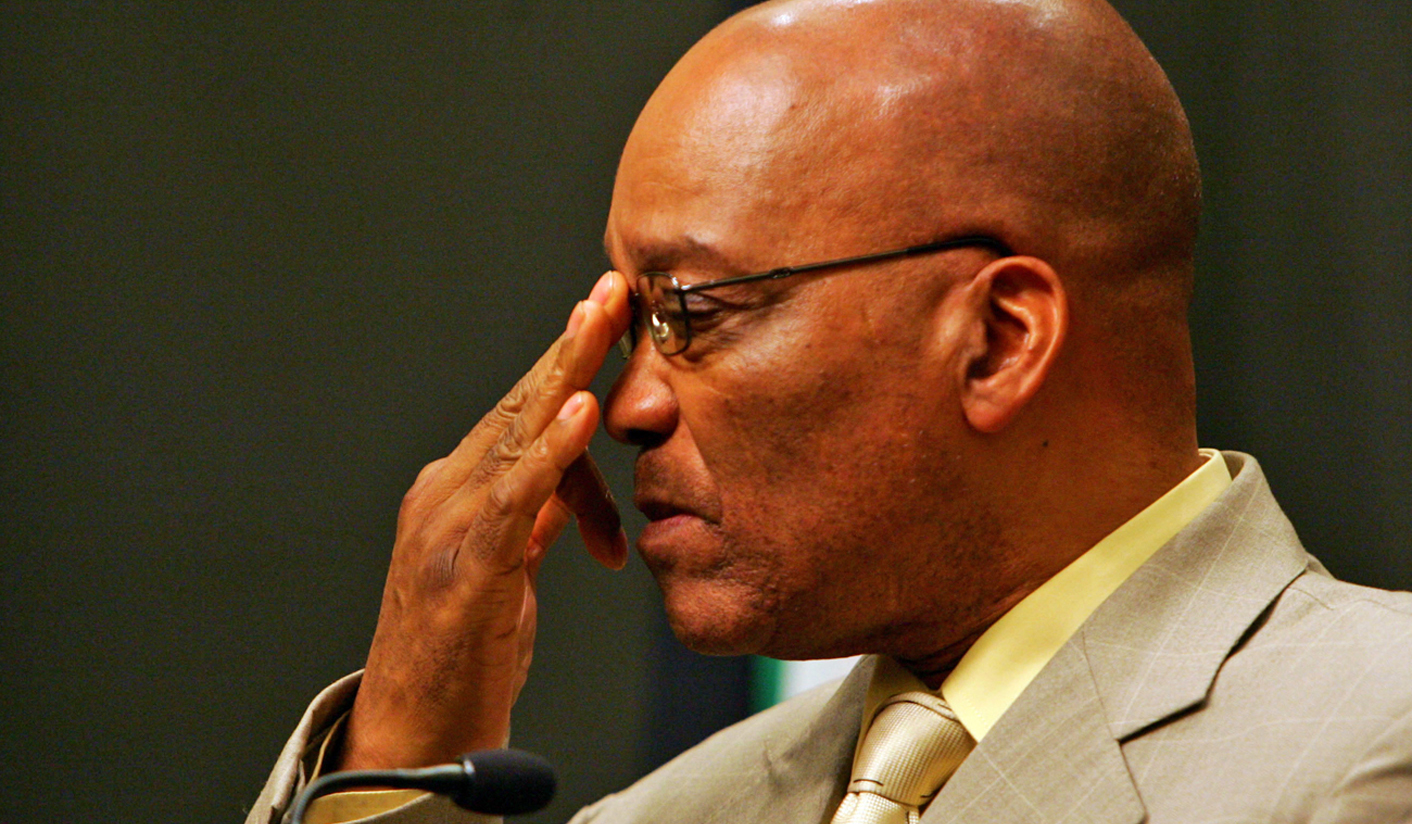 For a week, South Africans have been huffing and puffing about the president’s depiction in Brett Murray’s artwork, The Spear. Tomorrow, the matter comes before a judge and one of the houses – freedom of expression or the right to dignity – has to crumble. ALEX ELISEEV explores a case which has divided a nation.

Tomorrow, President, Jacob Zuma is due to ask a court to force an art gallery and one of the country’s leading newspapers to remove a painting that shows him with exposed private parts.

At first, one is tempted to snigger and utter something like: “Only in South Africa”. But at the heart of this legal battle lies a search for that invisible and evasive line between freedom of expression and its ability to damage a person’s right to dignity and privacy. It is a search – and a possible court order – with far-reaching consequences for a country battling to shake off a dark past and find a new identity.

The debate has splintered along racial and cultural lines, sucking in and spitting out opinions like a furious vortex. For a week now social media platforms like Twitter and opinion pages of newspapers have been ablaze with analysis of the controversial painting and what it means.

Then, late on Friday, Zuma filed an affidavit to support his urgent court application to have the painting – and all versions of it – removed from the Goodman Gallery and the City Press website.

In the court papers, Zuma speaks as a citizen and president of both the ANC and the country. He claims the painting depicts him “in a manner that impugns my constitutionally enshrined right to dignity and privacy”.

The court order sets out to have the portrait declared an “unlawful violation” of a section of the country’s Constitution. He wants the court to force the gallery and the newspaper to remove all forms of the picture – be they physical or virtual.
Zuma claims the artwork has “overstepped the mark and acceptable levels” of freedom of expression, which is guarded by the same Constitution.

The president says he is portrayed as a philanderer and a womaniser who demands no respect. He goes on to suggest the picture sends the following message: “I am an abuser of power, corrupt and suffer political ineptness”. He even suggests the ANC’s reputation as a liberation movement has been tarnished while his office has been mocked in the eyes of all who see the picture, both locally and abroad.

He ends off by saying that he was shocked and “felt personally offended and violated” by the depiction.

Pre-empting the legal argument from the other side, which is that the horse has bolted and the picture has been seen by millions of people, Zuma says a court order would “limit the harm already caused by the portrait”. In his view, the damage will then be contained to only those who had access to it.

Over the weekend, Zuma’s children weighed into the debate, saying the depiction of their father is “vulgar and lacks any trace of humanity”. Their public letter goes on to say: “The painting is really just the straw that broke the camel’s back in this notion that a black man who is associated with African cultures and traditions, and who does not fit the perfect mould of Western values and beliefs, is less human than the next person”.

If you had any doubt of how colossal this issue is, that last sentence should put it into context. It’s clear that we have moved beyond the painting and have sailed into turbulent waters, swimming with the sharks that have followed us throughout our journey as a nation.

This application has the potential to become a landmark case, in which we should all take great interest. Here is a president of a country flexing his legal muscles to, basically, have an offending artwork erased.

While some of the country’s top politicians, prosecutors, trade union bosses and even artists echo Zuma’s outrage, those opposing the action are predicting a slippery slope of crushed voices and expression, and ultimately a weakened democracy.

There are warnings of the dystopian future Ray Bradbury wrote about in Fahrenheit 451, with squads of firemen torching books to censor dissent.

“It is a sad day for South Africa when creative production is being threatened with censorship from our ruling party,” the Goodman Gallery is on record as saying. “We support our artists’ freedom of speech and expression and encourage them to show work that challenges the status quo, ignites dialogue and shifts consciousness.”

It points out that both the gallery and the artist, Murray, have a long history of fighting apartheid through art.

“Freedom of speech and free political dialogue are central to our democracy, and South African artists will hopefully continue to participate in our society in this way.”

City Press editor, Ferial Haffajee, puts it another way: “I’m tired of people who desire to kill ideas of which they do not approve.” Novelist and poet, Zakes Mda agrees: “As a person whose work was banned by previous oppressors, I’m against censorship even for those works that are not to my taste”.

Naturally, cartoonist Zapiro has not shied away from the controversy, using his Sunday Times spot to recreate Murray’s painting, but replacing Zuma’s penis with a long showerhead. The caption reads: “Want respect? … Earn it!”

In the same newspaper, Mondli Makhanya writes that Zuma will leave behind a sexual legacy that will eclipse everything else he has achieved. He called the country’s first citizen a stud, who “unzips a lot and is proud of it”.

Makhanya reminds us that Zuma has been married six times and has fathered more than 20 children. The president has also stood trial for rape (and was acquitted), caused outrage by claiming he took a shower to lower the risk of getting HIV/Aids and impregnated the daughter of a close friend. It is in reference to all these scandals that Zapiro calls on Zuma to earn the respect he claims to have been robbed of by Murray’s work.

Our courts have been busy, especially over the past few weeks, untangling the frayed edges of our democracy. The e-tolling case rages on while the Richard Mdluli one seems to have sparked the right action.

But what will the courts make of this case, being called on to balance two fundamental rights so deeply enshrined in our Constitution?

Look across the ocean and you will see much older democracies wrestling with the same issues. Canadian Prime Minister Stephen Harper has been painted in the nude, lying on a recliner with a dog at his feet. Ex-Italian prime minister Silvio Berlusconi has been depicted standing next to Napoleon Bonaparte and Benito Mussolini with a giant erection.

But South Africa’s example is messier, because of the role race and culture play, along with the scars of colonisation and apartheid.

So where will this road lead? Is South Africa ready for this fight? And will it leave us more divided or will it help us unite?

Already, the debate has driven a wedge between people who simply cannot step into the shoes of those arguing against them. Few remain on the fence, while the majority of South Africans have found themselves on either side, hurling what they believe to be sacred facts into the opposite garden.

If some have voiced their opinions in a dignified way, most have used emotive words, while many slip into outright abuse.

We also need to guard against the issue being hijacked by the populists, who use words like “disgusting and sadistic” to describe the painting but don’t examine the real issues behind it.

Any way you look at it, this is a crucial and difficult test for our young democracy. We must start thinking about how we’ll emerge from it. DM