DA: The march was just the beginning

DA: The march was just the beginning 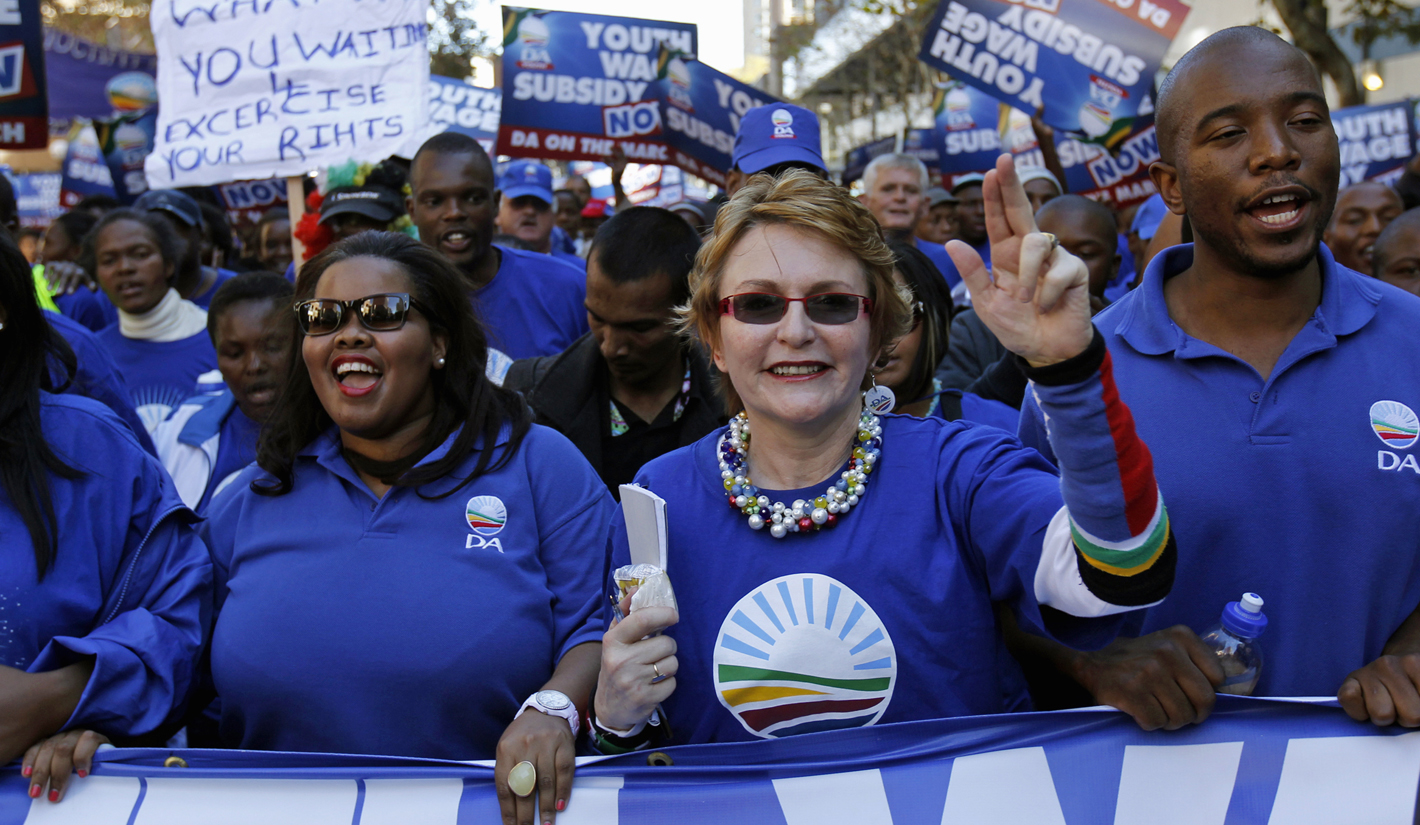 In the wake of Tuesday’s march to Cosatu House, the issue of violence against DA marchers seemed to overshadow any other concerns. But by Thursday it was back to business as normal for the DA as they announced their intention to push harder than ever for the youth wage subsidy. By REBECCA DAVIS.

Tuesday’s violence was barely given a mention at Thursday’s top brass DA press conference, with the focus firmly back on the youth wage subsidy. Nonetheless, the DA’s frustration with Cosatu was palpable throughout, as was their desire to use Tuesday’s events as evidence that it is the DA, rather than Cosatu, which really has the interests of South Africa’s poor at heart.

“What happened in the Joburg CBD on Tuesday will come to be seen as a turning point in South Africa,” Helen Zille promised. “Every South African now knows that the DA stands up for the unemployed, and that Cosatu opposes their interests, even violently”.

The point of Thursday’s briefing was to detail the next steps the DA will be taking in its attempts to force the implementation of the youth wage subsidy. Zille announced she will be seeking an audience with the National Economic Development and Labour Council to press home the “need for urgent progress” on the issue, and to point to the experiences of the Western Cape in the implementation of the DA’s version of a wage subsidy scheme.

Zille was referring here to the province’s Work and Skills for 100,000 programme, which is similar to what is proposed by the youth wage subsidy, though it differs in certain aspects.

Under the DA system, businesses are encouraged to take on unemployed young workers for a variable period of months. Those businesses which sign up to the scheme get about R1,000 per month to give these workers, but are encouraged to top this up from their own resources. Under a memorandum of understanding, they are also asked to train these workers up so that they are employable by the end of it – either to be retained by the company, or taken on by another business.

Treasury’s proposal for the youth wage subsidy, by contrast, incentivises companies to take on young workers in order to qualify for a tax credit for the business.

Zille says the private sector take-up of the programme has been so enthusiastic that they now find their budget slightly overstretched. Of the young people who have so far passed through the programme, she claims, 70% have found permanent employment without displacing another older employee  – this being one of Cosatu’s primary objections to the idea of the youth wage subsidy.

Shadow finance minister Tim Harris dismissed this argument as holding little water. “There will be some substitution effects, of course,” he said, but points to existing labour laws as a sufficient deterrent to prevent businesses sacking existing employees willy-nilly in order to take on young workers.

The DA accuses Cosatu of having stalled the youth wage subsidy within Nedlac for two years, claiming that Cosatu refused to discuss the policy there. President Jacob Zuma said on Thursday, however, that the subsidy was currently being looked at within Nedlac and that the body would be making final recommendations to Cabinet. If they delay further, Zille warned that she would ask Zuma to proceed without waiting for Nedlac’s consensus, given the body’s status as a “consultation chamber” rather than a decision-making body.

Parliamentary leader Lindiwe Mazibuko said the party will be using “every parliamentary mechanism available to pressurise the government”, including calling for a debate on the subsidy, submitting a question to Zuma and attempting to summon Cosatu general secretary Zwelinzima Vavi before the Finance Portfolio Committee and Labour Portfolio Committee to “engage him on his concerns”.

When asked how the DA would compel Vavi to appear before these committees, given that he is not an ANC MP, Mazibuko replied that parliamentary committee chairs are entitled to ask any member of the public to appear if the matter is of national importance. “I also don’t think Cosatu, given the vociferousness of their position, would turn down this offer.”

The DA youth wing will also have its part to play in the heightened activity around the party’s campaign. They see part of the problem as a lack of public knowledge about the subsidy: DA youth leader Makashule Gana said a recent poll had determined that 88% of respondents did not know what the youth wage subsidy was. When it was explained to them, however, almost 68% said they thought it would lead to more employment. The DA is thus planning to go all “Kony 2012” on the matter, with a public education blitz involving pamphlets, SMSes, emails and an online campaign.

“We will continue the campaign as long as it takes,” said Gana. “We’ll keep on fighting and we’re not going to stop at anything.” Despite Tuesday’s violence, Zille has also not ruled out the possibility of future marches. “Protest remains a legitimate and appropriate method of stating our case,” she said.

Of course, it’s hard not to dwell on the slightly surreal side of this all: the DA ploughing resources into winning support for a policy already endorsed by the ANC. When asked if the DA was trying to hijack the policy from the ANC, Zille’s response was to cite some of the policies the ANC has borrowed from the DA in the past, including the National Development Plan. “We have no allergy to the source of a policy,” she concluded.

One of the most evident outcomes of the current situation, though, is the DA’s growing dissatisfaction with Cosatu’s influence on the ANC.

“So we have a profound question about using a platform which favours the youth wage subsidy to get elected, and then opposing it as part of the alliance. There is a fundamental problem in a democracy when people, through entry-ism and not through election, can block key government policies.” DM Photo: Helen Zille (C), leader of South Africa’s main opposition party Democratic Alliance (DA), gestures during a march in Johannesburg May 15, 2012. The march by South Africa’s main opposition party on the headquarters of leading union federation COSATU descended into chaos on Tuesday, with police firing tear gas to disperse crowds of rock-throwing protesters. About 1,000 members of the opposition Democratic Alliance marched through downtown Johannesburg in support of a government plan to subsidize the wages of young people in a bid to ease chronic unemployment among the unskilled youth.The group was met by angry COSATU members who blocked the streets, sparking a violent confrontation that had to be broken up by police. REUTERS/Siphiwe Sibeko.