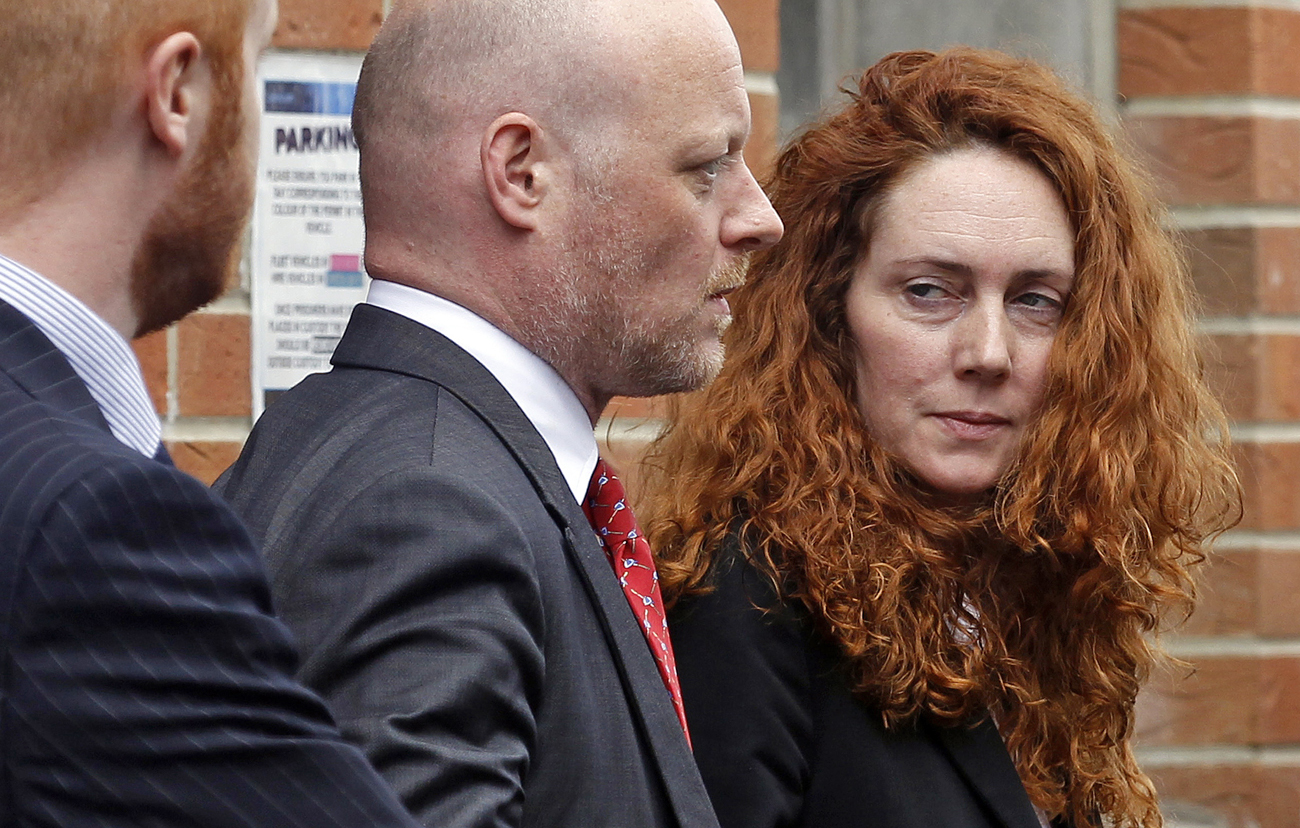 Rebekah Brooks, a close confidante of Rupert Murdoch, was charged on Tuesday with interfering with a police investigation into a phone hacking scandal that has rocked the tycoon's empire and sent shockwaves through the British political establishment. By Michael Holden and Kate Holton.

Brooks, 43, was charged with conspiring to remove boxes of archive records from Murdoch’s London headquarters, concealing material from detectives and hiding documents, computers and other electronic equipment from the police. If found guilty she could face a prison sentence.

The charges are the first since police re-launched an investigation into alleged illegal practices at Murdoch’s British newspapers following accusations the extent of wrongdoing had been covered up.

The news is a personal blow for the world’s most powerful media boss and also embarrassing for British Prime Minister David Cameron, who was close friends with Brooks and sent her text messages of support when the alleged offences took place.

The action against the woman who was one of his most trusted lieutenants comes as Murdoch faces increasing pressure in Britain. He has been forced to close one newspaper, withdraw a major takeover bid for a lucrative TV group and been described in a parliamentary committee report as someone who is not fit to run a major international company.

Murdoch’s closeness to Brooks, instantly recognisable for her mane of flame-red hair, was highlighted last year, when the mogul flew into London to tackle the hacking scandal, put his arm around her and declared that she was his top priority.

The charges relate to those frenzied days last July, when Murdoch shut the 168-year-old News of the World, a top-selling Sunday tabloid, and Brooks was first arrested.

Police said “unemployed” Brooks would face three charges of conspiracy to pervert the course of justice.

“I have concluded … there is sufficient evidence for there to be a realistic prospect of conviction,” said Alison Levitt, Principal Legal Advisor to Britain’s Director of Public Prosecutions in a rare televised statement.

“All these matters relate to the ongoing police investigation into allegations of phone hacking and corruption of public officials in relation to the News of the World and The Sun newspapers,” Levitt said.

Also charged were Brooks’s racehorse trainer husband Charlie Brooks, her secretary and other staff including her driver and security officials from News International, the British newspaper arm of Murdoch’s News Corp media empire.

They will all appear in court in London on June 13.

“We deplore this weak and unjust decision,” Rebekah and Charlie Brooks, who was at school with Cameron at the exclusive Eton College, said in a statement.

Photographers surrounded the London police station where Brooks was questioned on Tuesday, and chased her limousine down the street as she was driven away – something her newspapers routinely inflicted on others while she was in charge.

The maximum sentence for the offence is theoretically a life prison term although that would be unlikely, with a sentence of between a few months and three or four years years more common.

A spokesman for Cameron said the prime minister had not been informed in advance of Tuesday’s announcement, and would not be commenting further.

“This is a symbolic moment for British media and politics,” Ivor Gaber, professor of political journalism at London’s City University, told Reuters.

“This yet again raises questions about the prime minister’s judgment, that he chose to associate both professionally and socially with somebody who is facing charges which could result in imprisonment.”

The phone-hacking scandal first broke six years ago when the royal correspondent from the News of the World and a private detective were arrested and later jailed for hacking the phones of aides to the royal family.

News International maintained the practice was limited to one rogue reporter until that defence crumbled last year as detectives reopened their investigation amid claims their initial probe had been insufficient.

About 160 officers are examining claims that journalists at the News of the World routinely hacked into the phones of hundreds of celebrities, politicians and victims of crime to generate front-page stories.

They are also investigating whether staff hacked into computers and made illegal payments to public officials, including the police, to get ahead in their reporting.

Almost 50 people have been arrested, with a tax official and a woman the latest to be held by detectives on Tuesday morning.

“HORSEGATE” AND THE PYJAMA PARTY

The explosive saga has shone a light on close ties between the media, British politicians and the police, with Brooks one of the central characters.

Ministers who previously overtly courted Murdoch and the backing of his papers turned on him last year, forcing the 81-year-old to withdraw a $12 billion bid for British pay TV group BSkyB.

Under pressure, Cameron admitted he had ridden a horse given to Brooks by police with her husband, an incident which critics dubbed “horsegate” and seized on as evidence as an overly cosy relationship. He also attended a Christmas party at the couple’s house in 2010, at a time when the government was deciding whether to approve the BSkyB deal.

Dubbed by some Murdoch’s “fifth daughter”, Brooks edited the News of the World from 2000 to 2003 and went on to become the first female editor of the Sun daily tabloid, Britain’s most widely read newspaper, for six years.

With her close links to the upper echelons of the British establishment including a string of prime ministers and senior police officers, Brooks was promoted to run Murdoch’s British newspaper arm from 2009 to 2011.

She had close ties with Cameron’s predecessor as prime minister, Gordon Brown, whose wife Sarah hosted a ‘pyjama party’ in 2008 that was attended by Brooks and Murdoch’s wife Wendi and daughter Elisabeth. And she was also close to Tony Blair.

But Brooks was forced to stand down last July under a tide of revelations, and was arrested two days later over allegations of phone hacking and corruption.

She was detained again in March this year, along with her husband, on suspicion of perverting the course of justice. Detectives have not concluded their investigations into the other potential offences.

During day-long questioning at a public inquiry into media ethics last week, Brooks said that she and Cameron had frequently exchanged text messages and would occasionally sign them off “LOL”, by which he meant “lots of love”.

Cameron is already facing questions over why he hired Andy Coulson, Brooks’s successor as News of the World editor, as his media chief. Coulson, who quit that role in January 2011, is amongst those to have been arrested.

“I fear the prime minister will have some questions to answer about the kind of company he has been keeping,” Chris Bryant, an opposition lawmaker and hacking victim, told Reuters.

The others charged on Tuesday were Cheryl Carter, Brooks’s personal assistant, Mark Hanna, the Head of Security at News International, Paul Edwards, her chauffeur, and Daryl Jorsling, who provided security for Brooks.

Photo: Former News International chief executive Rebekah Brooks (R) leaves Lewisham Police Station in London May 15, 2012. Brooks, a close confidante of Rupert Murdoch, was charged on Tuesday with interfering with a police investigation into a phone hacking scandal that has rocked the tycoon’s media empire and sent shockwaves through the British political establishment. REUTERS/Stefan Wermuth.