Palestinian prisoners on hunger strike: Who exactly represents them? 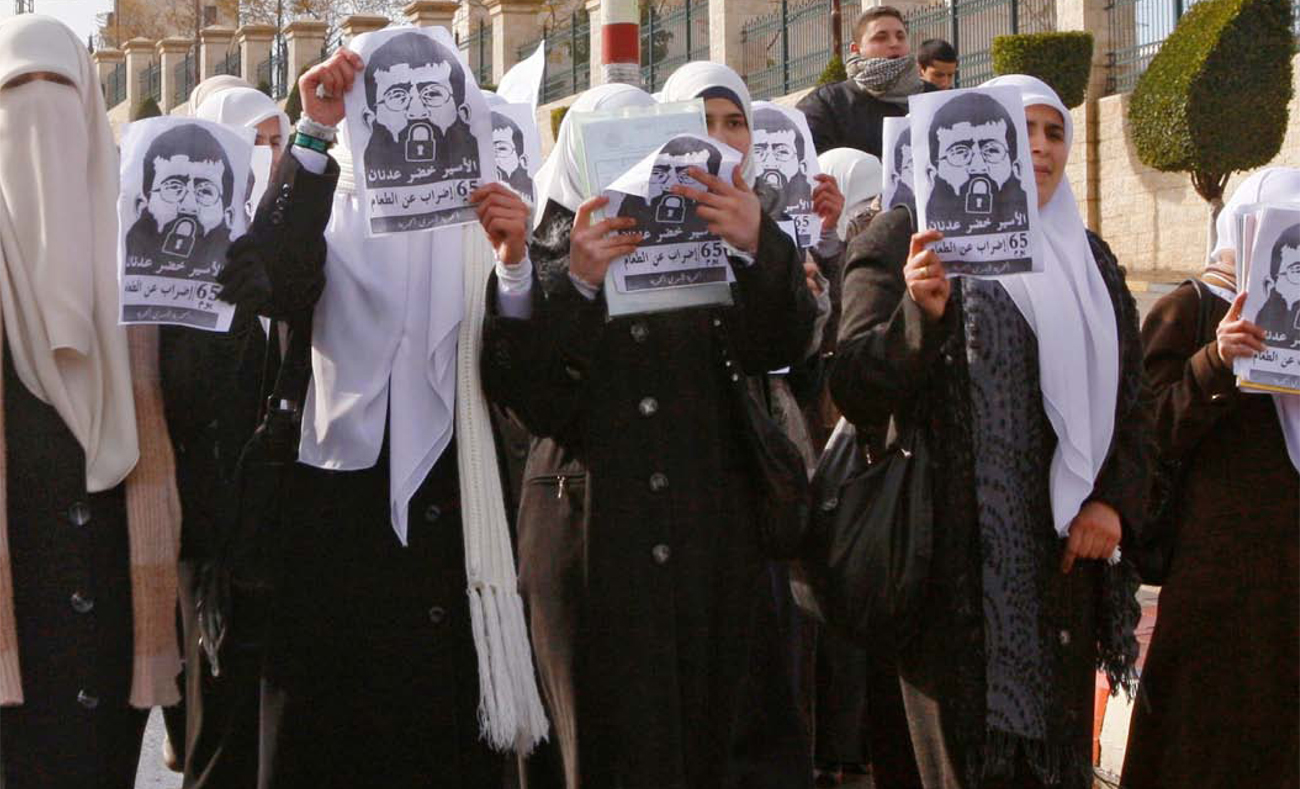 First a Palestinian minister announced that a deal had been reached with Israel to end a weeks-long hunger strike by hundreds of prisoners. Then, various activists countered assertions of the reported deal, claiming the Palestinian Authority actually did not represent the hunger strikers and had no right to make such announcements on their behalf. The only certainty is that there is a crisis in the Palestinian leadership. By KHADIJA PATEL.

Hours of uncertainty, especially telling of the mistrust in which the official Palestinian leadership is held, followed the announcement of a “deal” struck between Palestinian prisoners on hunger strike and Israeli authorities. The Palestinian minister of prisoner affairs, Issa Qaraqe, claimed on Monday evening that the higher committee of hunger strikers agreed to break their fast, but for many Qaraqe’s word was not enough.

Speaking to Daily Maverick late on Monday, Lina Al-Saafin, a Palestinian writer and activist from the West Bank, was reluctant to accept the minister’s announcement of a successfully completed deal. “So far there’s a lot of rumours flying about regarding a deal, but I’m trusting only Addameer for this and they just posted that the mass hunger strike which began April 17th is still on until the higher committee for the hunger strikers release a statement.”

“The PA is trying to take credit for any deal that happens, but it’s almost midnight here and the hunger strike is still going on,” Al-Saafin told Daily Maverick over IM.

Ali Abunimah, Co-founder of The Electronic Intifada and author of One Country: A Bold Proposal to End the Israeli-Palestinian Impasse, is especially sceptical of the reports of a deal.

“I don’t think anyone can say they represent or speak for Palestinian prisoners,” he said, echoing Al-Saafin’s sentiments. “The PA, Mahmoud Abbas and his cronies have set out to sabotage the success of these hunger strikes and, failing that, they seek to co-opt its success for their own advancement.”

On Tuesday, as Palestinians commemorate the Nakba – the exodus of hundreds of thousands of Palestinians following the foundation of the Jewish state in 1948 – attention will be focused on the Ashkelon prison.

Have Israel and the PA succeeded to stem a swelling resonance with the hunger strikers, in time to thwart unrest? “(Tuesday) will be a crazy day,” Al-Saafin adds before logging off.

If a deal has indeed been reached, it will be the first time that more than 1,000 Palestinian prisoners eat after refusing food for nearly a month. A smaller core of about 10 prisoners has refused to eat for periods of 50 to 76 days. Many of the longer-fasting strikers have been receiving liquid infusions to keep them alive.

An Egyptian official involved in the talks between prisoners and the Israeli authorities, quoted by Al-Jazeera, has revealed some details of the purported deal to end the strike.

The light of day is set to shed as well more clarity on the details of the purported deal as well as the administrative detainees’ reception to it.

In recent weeks, the fate of the prisoners, always an emotive issue in Palestinian society, has become a rallying point for a deeply fractured Palestinian society. The decision of these men to forego food and drink to demand better conditions inside the Israeli penal system has succeeded to unite Palestinians towards a common goal. The Higher Arab Monitoring Committee, representing Arab communities in Israel, announced that this year’s Nakba events were also in solidarity with the “struggle of our brave prisoners in the Israeli prisons”.

Omar Rahman, a journalist based in Palestine, believes prisoner strikes have certainly struck a chord with the Palestinian people. “Prisoner issues have a special resonance in Palestinian society. No issues touch the lives of all Palestinians across all the divides like the issue of Palestinian prisoners.

It (has been) an amazing display of collective action. It has been inspiring, no matter your vantage point. It is an incredible display of personal courage,” he said.

Abunimah notes: “These hunger strikes have demonstrated the importance of recognising the legitimacy and authority Palestinian prisoners hold with everyone. These strikes, as acts of resistance, have been directed more towards Israel than the PA. The situation the PA now finds itself in is that is has to answer to people who are actually taking action, doing something while the PA does nothing. There is a sense that an alternate form of leadership is being born. Meanwhile, the PA looks ineffective.”

Historically, deaths on hunger strike have been rare. Not quite a suicide mission, the real power of the hunger strike is derived from a striker’s sworn intent to a slow death in public view. The most intractable hunger strikes have been carried out by people in the custody of a state, in prisons or detention centres. Within the past few years there have been well-publicised hunger strikes for various causes in many countries, including the United States, the former Soviet Union, China, South Africa, Sudan, Poland, the former Yugoslavia, Bangladesh, France, Egypt, Canada, Israel, the Netherlands and Northern Ireland, where notably 10 strikers died in 1981.

“More than 1,600 people have been on strike and for the greatest part of this strike there has not been a peep from the media or foreign governments. This lack of attention feeds into the Palestinian impression that the world does not care no matter what Palestinians do,” Rahman notes.

Sahar Francis, the Director of Addameer. also lamented the lack of support the hunger strikes received from the international community. “It has been too little too late,” she said.

Abunimah, however, is especially scathing of the lack of a South African response to the recent hunger strikes. “International silence does not surprise us. The US and the EU, we expect them to be silent, but what about South Africa?” he asks.

Abunimah notes that the strikers believe this particular mass-hunger strike by Palestinian prisoners should evoke memories of the South African struggle against apartheid. “Hunger strikes played a huge role in the struggle in South Africa,” he says.

In 1989, the largest ever protest by detainees  began with 20 state-of-emergency detainees at Diepkloof prison. They began an “indefinite” hunger strike demanding the immediate and unconditional release of all detainees. The action sparked off a national wave of hunger-strike protests by detainees and solidarity action by people and organisations across South Africa and around the world.

“The hunger strikes undertaken by South African detainees during the struggle has actually played a formative role in the way in which medical associations now approach prisoners on hunger strike,” Abunimah adds.

“South Africa is a world power with the moral authority to speak against injustice,” he continued. “The South African government should know that the PA are effectively leaders of a Bantustan,” he punched out. “If you claim solidarity to the PA then you are not with the Palestinian people.”

Spokesman for department of international relations and co-operation Clayson Monyela reiterated the South African government’s commitment to the Palestinian cause: “We consistently support the cause of Palestinian self-determination. We are very sympathetic to their struggle.”

Without commenting on the hunger strikes themselves Monyela said: “Any acts taken by Palestinians towards earning their right of self-determination is consistently supported by the South African government.”

But “solidarity”, as one official said during commemorations of the UN’s International Day for Palestinian Solidarity held at the department last year, “should not be politicised.”

And though the South African government is not likely to give up its unflinching, if couched, support of the PA, these hunger strikes have exemplified the crisis of leadership in Palestine. DM