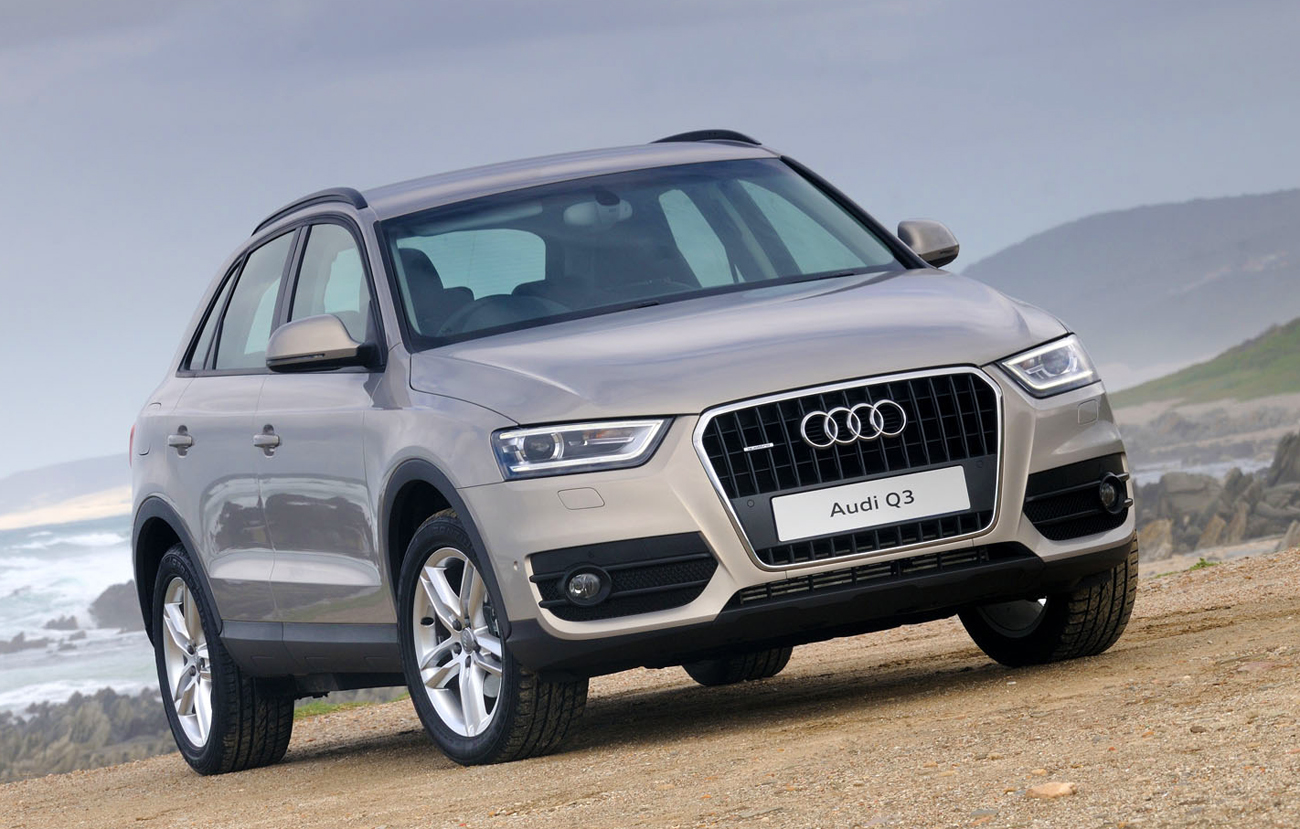 Two of the most telling trends in the new vehicle market at present are the growing popularity of crossover vehicles and SUVs, and increasing demand for more compact, more efficient cars. The new Audi Q3 addresses both in a premium package that also promises comfort and performance. But price may prove to be the most important factor of all. By DEON SCHOEMAN.

The Audi Q3, launched locally a few weeks ago, is the baby brother of the mid-sized Q5 and the juggernaut Q7. In that context, one would have expected the newcomer to be compact and nimble, with more emphasis on crossover versatility than all-terrain capability.

It’s the approach BMW adopted when it created the low-slung, almost estate-like X1, which competes directly with the Q3. But as it turns out, the Q3 looks very much like a scaled-down Q5, complete with the raised stance and robust presence of a gung-ho SUV.

Audi points to the steeply raked front windscreen and the rounded rear tailgate as proof that the Q3 is sportier and wieldier than its larger Q-range siblings. And yes, it’s certainly more compact. But that doesn’t make it small or svelte: at 4.4m long, 1.83m wide and 1.61m tall, Ingolstadt’s latest has a resolute and robust presence. It stands to reason then that, in pure aesthetic terms, there aren’t too many surprises. The front is dominated by Audi’s trademark single-frame grille, while the headlights incorporate LED-powered strips for daytime running lights. The effect is certainly striking, but also instantly familiar.

The side view shows off a profile that flows smoothly from front to rear, with the raked windscreen and that curved rear suggesting a more dynamic, almost coupé-like personality. Big wheels, a raised stance and a wide-opening tailgate confirm the Q3’s SUV credentials.

But for all its apparent bulk, the newcomer’s kerb mass is trimmer than you’d expect. Depending on model, the Q3 weighs little more than 1,500kg, thanks to the strategic use of aluminium and high-tensile but lightweight steel.

As a result, even apparently modest powertrains provide ample get up and go. Our test car was powered by a turbocharged two-litre four-cylinder engine, rated at 125kW and 280Nm of torque. The seven-speed S-tronic dual-clutch gearbox is an extra cost option, but quattro all-wheel drive is standard.

Other engine options offered in the Q3 line-up include two 2.0-litre turbodiesels, with 103kW and 130kW respectively, and a 155kW version of the 2.0-litre turbo petrol engine. All but the entry-level 103kW TDI boast quattro, while there is a choice of manual or S-tronic dual-clutch gearboxes.

In the case of the example under scrutiny here, the combination of relatively low mass, a willing engine and the S-tronic transmission’s rapid-fire gear shifts creates a much sportier package than expected. The four-cylinder quickly comes on song with little lag to speak of.

Add a steering system that feels crisp and nicely weighted, a suspension more concerned with response and control than with comfort, and a set of well-judged ratios, and the result is an involving drive – and a thrilling one.

The Q3 certainly isn’t scared of gravel, but it’s also no slouch on the black stuff. Audi claims a zero-to-100km/h sprint time of 8.2 seconds, and a top speed of 212km/h. Fuel consumption varies between 6.1-litres/100km on the open road and 9.5-litres/100km in the urban jungle. But our test average came to just under 12-litres/100 km. And no, we weren’t racing around town – at least not all the time.

Of course, the problem is that the Q3 always feels nimble and athletic, making it difficult not to explore the urge on offer. For all its SUV traits, this is a vehicle that enjoys being thrashed through corners, regardless of the terrain. And that isn’t exactly conducive to a thrifty appetite for premium unleaded.

Talking of terrain, the Q3 is tall enough to clear fair-sized obstacles when venturing off the beaten track, while the quattro all-wheel drive system virtually guarantees traction on compromised surfaces. However, because the standard tyres are on-road biased, don’t expect the Q3 to cope too well with mud or deep sand.

It shines on gravel, with the quattro system’s extra traction and the subtle but precise intervention of the traction control allowing a smooth and unfussed ride, and loads of confidence-boosting control.

However, it’s fair to say that the Q3’s natural habitat is very much on tar, be it in the hustle and bustle of the concrete jungle, or the big skies and quieter roads of more rural settings. Driven with intent, the Q3 does show off its unexpectedly sporty character to full effect.

While it feels cohesive and convincing, thanks to its robust construction and tactile quality levels, it’s the composure of the Q3 and its ability to tackle curves and corners with confidence that impress most.

Of course, the quattro all-wheel drive provides loads of traction on tar too, but the taut suspension also contributes to an overriding sense of poise. The downside is a ride that might be considered too uncompromising for some, especially on our often-crumbling road surfaces.

Even so, the interior proves to be a comfortable place. The Q3 may be the smallest member of the Q family, but there’s plenty of room front and rear and the fit and finish is to Audi’s usually high standard. That also goes for the ergonomics, which link a nicely elevated driving position and clearly legible instruments to well laid out controls. The interior’s appeal extends to space and practicality. The rear accommodation is more than sufficient for two or even three occupants, while the bench seat is split 60:40, and can be folded forward in part or completely, to create a versatile mix of cargo space and seating.

Audi claims a luggage compartment capacity of 460-litres with the seats in place, but this can be enlarged to 1,365-litres with the bench seat folded flat. The downside is a space saver spare wheel – something no vehicle with even mild all-terrain pretentions should have to rely on.

Standard equipment is adequate, if not full house. For instance, you get remote central locking, a decent sound system, electric windows and mirrors, a multifunction steering wheel and comprehensive instrumentation as standard.

However, niceties such as electric seat adjustment, cruise control, satnav, park distance control and Xenon headlights cost extra. Most buyers will end up spending at least R30,000 on optional extras.

Which brings us to the small matter of price. This two-litre TFSI S-tronic version of the Q3 carries a R421,500 price tag. Add some must-have extras, and the price quickly jumps to R450,000 or more. While that may be competitive in the premium compact SUV segment, it’s hardly cheap. Audi, of course, will argue that you get what you pay for.

That aside, the Q3 ticks all the right boxes. It is everything one would expect of a premium product, a luxury SUV – and yes, of an Audi.

The more compact size will suit many would-be buyers better than some of the 4×4 barges currently populating the SUV domain, and it’s good enough to tackle mild off-road terrain with confidence. Add its comfort, quality and dynamic talents, and that eight-month waiting list for a Q3 becomes easier to understand. DM