Make no benefit great countries of South Africa and Kazakhstan 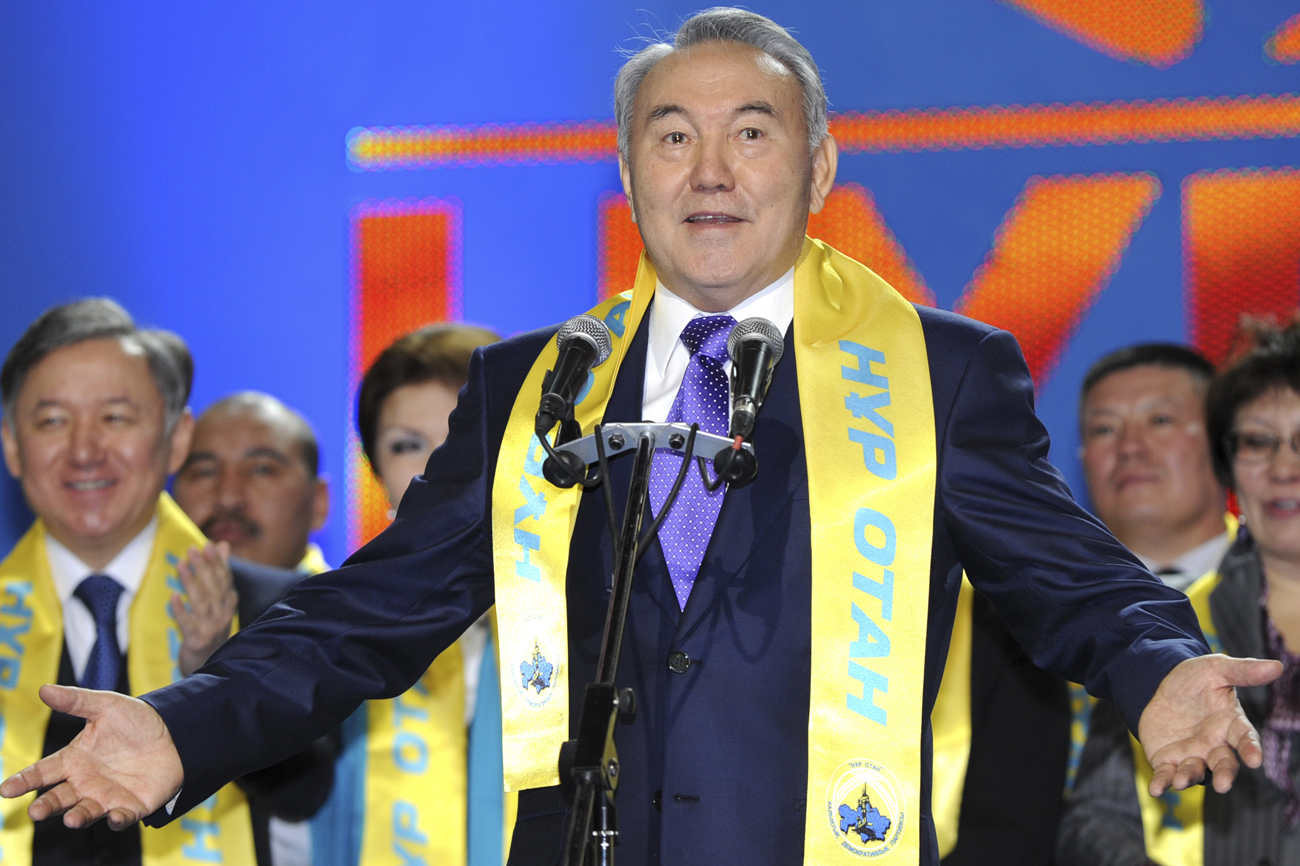 It shouldn’t be hard to find Kazakhstan. It is a really big country of over 2.7-million square kilometres, more than 15 million people live there and it fills up a really big space on the map between the Caspian Sea and Siberia. And with a South African deputy minister’s visit to Astana, Kazakhstan’s new capital, a few days earlier, the country had even briefly made the local news. Well, sort of, anyway. By J BROOKS SPECTOR.

While on his trip, deputy minister of the department of international relations and co-operation Ebrahim Ismail Ebrahim and his Kazakh counterparts had talked about Kazakh president for life (that last bit isn’t in his official job description, but it probably should be) Nursultan Nazarbayev’s upcoming visit to South Africa. They also talked about some good old-fashioned bilateral cooperation in mining, industry, agriculture and tourism development.

According to a functionary of the Kazakh government in a story in the country’s not-quite-free press:

“South African President Jacob Zuma personally invited Nursultan Nazarbayev to visit our country. The final decision on the visit will be made at the level of heads of state and presumably the visit may take place during the second half of the year.”

Nazarbayev has been president of the place since it declared its independence from a dissolving Soviet Union in 1991. And every time the country has had one of those sometimes-tricky things called an election, Nazarbayev has beaten his previous record for a winning margin.

Judging from the last time around, he’s now closing in on being the preferred choice on every ballot cast, every time the Kazakhs vote. A US State Department report, discussing a typical Nazarbayev victory at the polls several years ago, reported: “Official results gave the president 91% of the vote, although independent exit polls found this figure to be somewhat inflated.” In the April 2011 election, Nazarbayev did even better, receiving 95.54% of the vote, and 89.9 % of registered voters participated in this election.

It turns out, of course, that Kazakhstan is not just a picaresque set-up for Sasha Baron Cohen’s comic alter ego of Borat, the confused but sly traveller and would-be video journalist. Kazakhstan is the world’s leading producer of uranium and a major petroleum and natural gas producer. In fact, industry analysts believe that with the planned expansion of oil production, along with the opening up of new fields, the country should be able to produce 3-million barrels a day by 2015.

Should this happen, it would catapult Kazakhstan into the ranks of the world’s top 10 oil-producing nations. Petroleum and other strategic mineral production make for real reasons why a country like South Africa – or, say, China or the US – would find Kazakhstan to be a really good partner to expand and deepen trade relations with for the future.

Besides, it has had a largely admirable economic record since independence and, since 1993, Kazakhstan’s extractive industries have attracted well over $30-billion in foreign direct investment.

There are lots of other interesting things about Kazakhstan. It is the site of Russia’s space programme launch complex at Baikonur and, until a joint US-Russian project finished decommissioning a reservoir of leftover Soviet missiles and warheads, Kazakhstan had become a weird kind of nuclear power-by-inheritance from the remnants of a now-defunct Soviet Union.

The lands that eventually became Kazakhstan are historically and archeologically important as well. Some scholars say its vast, wide-open steppes are where humankind first domesticated horses thousands of years ago. These same lands later became the site for a northern route of the fabled Silk Road of caravans from the Mediterranean lands to the Indian subcontinent and then on to China and back again.

Kazakhstan was also the locus of Nikita Khrushchev’s “Virgin Lands” agricultural development plan. The failure of that little adventure contributed mightily to his downfall.

The late writer, Alexander Solzhenitsyn, had served both political imprisonment and internal exile in Kazakhstan – and his hospitalization while there became the inspiration for his novel The Cancer Ward.

Back in the 1800s, the various Kazakh khanates came under Russia rule during Russia’s diplomatic and military competition with Britain in “The Great Game” over who would control the borderlands between Russia and India. In the 1980s, during the last years of Soviet rule, there were growing pressures for major political and economic reforms. Then, in December 1986, ethnic Kazakhs carried out mass demonstrations in Almaty (the former capital) to protest Moscow’s instalment of a non-Kazakhstani First Secretary as the region’s new political leader. Soviet troops suppressed that unrest and arrested dozens, but in the final months of Soviet rule, discontent continued to grow, now encouraged by then-Soviet leader Mikhail Gorbachev’s reform policy of glasnost.

With growing demands by all of the non-Russian republics for greater autonomy, Kazakhstan declared its de facto sovereignty within the USSR. Then, after the August 1991 abortive coup attempt in Moscow by the military and the subsequent dissolution of the Soviet Union, Kazakhstan took the gap to declare full independence on 16 December 1991.

And so, taken together, there were all kinds of reasons to keep an eye out for any signs of a flowering in the relationship between South Africa and Kazakhstan – and a look for chances to learn more about the place.

Years before, I had already become captivated by the region after watching a gorgeous, year-long TV series about the ancient lands and civilizations along the Silk Road, including the historical Kazakh lands. With its vast, unlimited landscapes, complex history and, now, its almost under-the-radar, growing relationship with South Africa, I was completely hooked when I received an invitation to attend a special briefing on Kazakhstan.

Sent from the department of international relations on behalf of Kazakhstan (their nearest embassy was in Abu Dhabi), the tempting invitation read: “The Embassy of Kazakhstan invites members of the media, including advertising executives/officials, to a meeting to discuss (1) Kazakhstan’s plans for improving bilateral relations with South Africa, (2) a sponsored media tour to Kazakhstan and (3) plans to promote Kazakhstan through advertisements in the South African media.”

Here was a chance to learn what Cohen’s alter ego’s real home would be like. “Absolutely, is exactitude for learnink” I found myself unconsciously parodying in the Borattian vein.

And so it was off to a hotel in Johannesburg’s Sandton business centre at the time and date specified.

But then things got weird. Walking into the hotel, there was no sign of anything resembling a special invitational meeting to learn more about Nazarbayev’s playground. The desk clerk knew “nodthink”, neither did the concierge, the bellman, the three nervous people standing around waiting for their overdue taxi ride to the airport, the parking guy, a man delivering satellite TV dish parts – or anybody else who could be buttonholed in the lobby for directions. “Odd, this thinkink.”

So a call to the number on the invitation and there is an embarrassed sigh and a pause. Then: “The Kazakh ambassador’s schedule changed and so we’re going to reschedule this for tomorrow. We’re very sorry for this inconvenience.” And so, on to the next day, armed with new instructions, I’m back on the road again when I get an SMS: “Cancelled.” Hmm, another call to an increasingly flustered, nonplussed departmental staffer to learn the Kazakh ambassador has discovered his party’s plane reservations mean he must drop any media briefing if they want to fit in those meetings with energy and resource groups like Sasol.

Damn, no chance for that tantalising media invitation to tour sunny, scenic, historic Kazakhstan. No chance to see what might have inspired Cohen to become Borat. No chance to go to Baikonur. No chance to find out what those former missile silos are being used for now. No chance to learn first-hand about “Kazakhstan’s plans for improving bilateral relations with South Africa” and working more closely with the press.

But, along the way I gained an insight about what happens when a country’s leadership believes it doesn’t really have to pay any attention to the media and can simply wave them away to focus on important stuff like meetings with a big corporation or two. There is a lesson here for yet another country as well… DM Kazakhstan’s President Nursultan Nazarbayev, wearing a scarf of the Nur Otan party, delivers a speech during a “Forward, Kazakhstan” forum organised by activists and supporters of the ruling party in Astana January 16, 2012. Three parties won entry to Kazakhstan’s new parliament by securing more than 7 percent of the vote in an election offering a small concession to democracy in the Central Asian country, the Central Election Commission said on Monday. REUTERS/Mukhtar Kholdorbekov.