Joseph Stiglitz: Austerity is not the answer 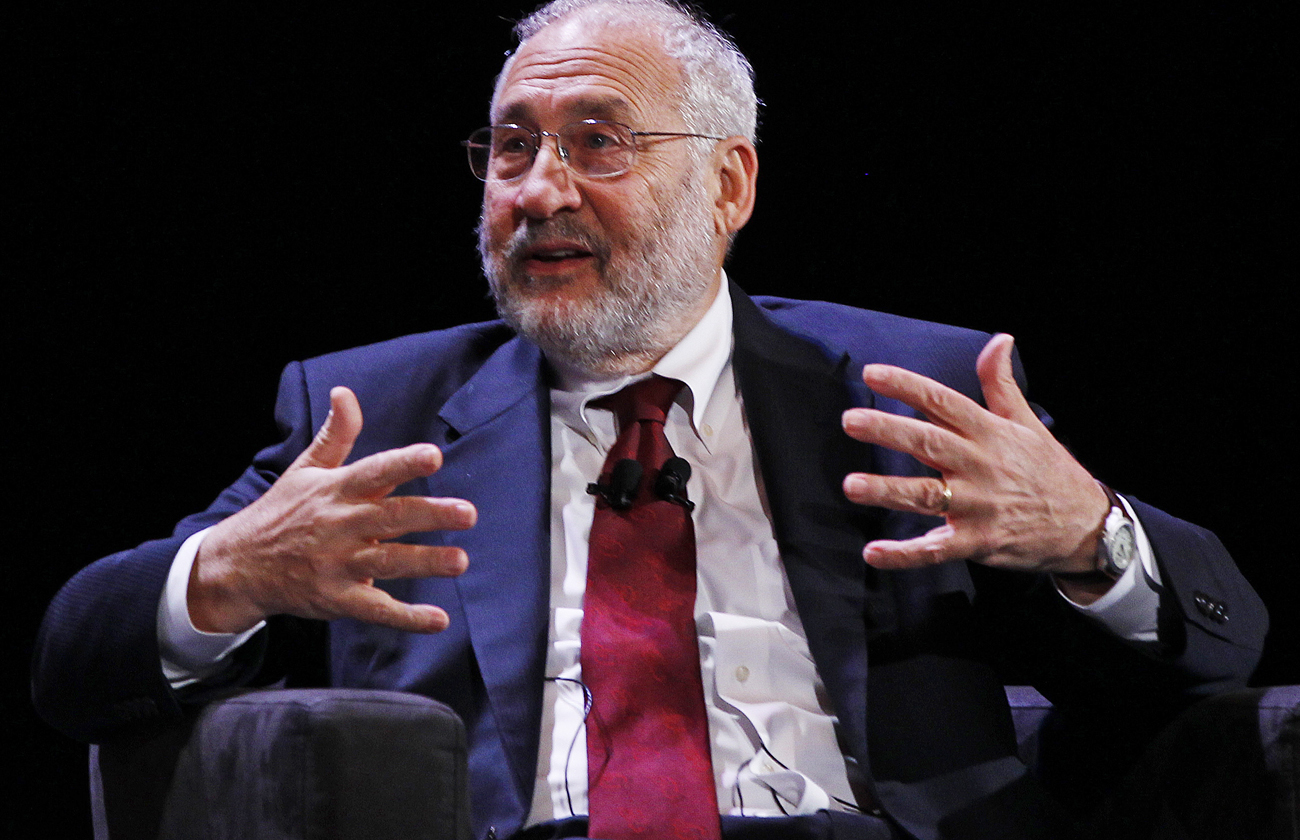 The Nobel Prize-winning economist is in town for the Absa Capital Markets conference. His view of the world’s advanced industrial nations is bleak, to say the least. But the good news is that he’s much more upbeat about the prospects for emerging markets like South Africa – as long as we watch our exchange rate. By REBECCA DAVIS.

It’s Monday morning in an unseasonably sunny Cape Town, and Joseph Stiglitz is in a feisty mood. This is nothing new: he is used to speaking his mind, regardless of the consequences.

Stiglitz occupies an unusual space somewhere between the Establishment and the fringe. The former World Bank chief economist has built a career out of opposition to many of the fundamental tenets of current Western economic policy, upsetting many while being embraced by others with equal fervour.

For years he has been an outspoken critic of free-market economics, rating agencies, globalisation, the Iraq war and, particularly, the International Monetary Fund. In his best-known work, Globalization and its Discontents, he slammed the IMF’s policies as disastrous to the developing world.

Despite this maverick reputation, he is still one of the most respected economic minds in the world. “I was in discussion with (Italian Prime Minister) Mario Monti last week,” he mentions in passing.

Governments want to harness Stiglitz’s brain, and South Africa is no exception: the South African government has chosen him to be their eyes and ears on the Walmart-Massmart merger. In this capacity, he will join representatives of Walmart and the affected SA unions to produce a study on the deal.

At the time that this was announced last month, the department of economic development released a statement saying Stiglitz was the obvious choice because “His work has shown the value of smart government action to promote social equity, growth and economic development.”

The topic of Stiglitz’s media briefing on Monday was ostensibly “Prospects for Africa and the world”, but his focus was more on the latter. That’s unsurprising, given the weekend that’s just passed in Europe.

In France, voters said a conclusive “non!” to incumbent Nicolas Sarkozy in favour of socialist candidate Francois Hollande. In Greece, the majority centre-left parties were shunned by voters in favour of extreme left or right-wing political groups. Even in comparatively stable Germany, Chancellor Angela Merkel’s party got battered in the polls on Sunday. The message is clear: European voters are unhappy with the status quo.

Stiglitz thinks they are right to be. Time and again, he comes back to one basic point: Austerity is not the answer. “No large economy has ever recovered through austerity. Growth won’t come just from austerity, nor just from structural reforms,” he says.

Okay, but what’s the alternative? That depends which country we’re talking about. Stiglitz says the difference between the US and most of Europe is that the US still has access to funds, so it can afford to take a different approach.

“We [the US] can still borrow at 1% and long-term at under 3%,” says Stiglitz. “And fortunately for decades we have under-invested in infrastructure, technology, education, so we have lots of opportunities for high-return investments.”

Stiglitz maintains that spending money on high-return public investments improves the national balance sheet, because the returns are higher than the cost of funds. “So in the US the answer is easy.”

In most of Europe it’s a different picture, however, because of borrowing constraints. What then? Raise taxes, says Stiglitz. “The view that you should not increase taxes is just wrong.” He says governments should implement the tax hike and then spend the proceeds on high-return investments. “Then the net effect is to stimulate the economy and create employment.”

If he says European solidarity could make a difference in ameliorating Europe’s prospects, he is dubious about the euro’s chances of survival. “The euro was designed to bring Europe together, but it seems to be dividing it.”

If the end of the euro is coming, though, Stiglitz believes it will be as much down to political factors and decisions as economic.

“The creation of the euro was political. Europe was not an optimal currency area, and they knew that,” Stiglitz says. “I like to say that America is a single currency area, and we work. That’s because if California has high unemployment, the federal government pays for it, not California.”

This brings him to what he sees as a major flaw of the EU framework: “Debt is associated with particular territories, but EU citizens have free mobility. If young Irish people don’t want to pay for the mistakes of their parents in allowing the real estate bubble to grow, all I have to do is move to the UK and I don’t have to pay for any of their debts. So there’s a framework in which you can escape national debts, but this causes a downward spiral in the national economy.”

It also leads to a situation where “migration is motivated by how we can escape past mistakes”.

Stiglitz’s euro-scepticism is what leads him to advise Africa against any similar systems. “Should Africa have a common currency? The lesson from Europe is clearly no.”

What about Brazil, India, China and South Africa creating a common currency? Stiglitz thinks it’s more important for a single global reserve currency to be established, to reduce dependence on the dollar. “The dollar is an anachronism in the 21st century,” he says. “If South Africa is trading with India, why do we need to trade rupees to dollars to rand?”

He does think the BRICS initiative to create a new bank, discussed at the body’s meeting in Delhi in March, is important. In his view, new economic realities need to get translated into new geo-political realities, and with Europe going to hell in a handbasket, it’s time for emerging markets to take a much more active role in global governance. He points out that BRICS countries now have a higher combined income than advanced industrial nations did at the time of the founding of the World Bank.

Stiglitz is sombre about the economic futures of Europe and the US. “Economics is called the dismal science, and at the moment we’re having a field day, because things are really dismal. We don’t have to make things up, it’s the way they are.”

But this cloud has a silver lining, and it’s found in the emerging markets.

Africa in particular is showing the fruits of improved governance, and Stiglitz is especially heartened by a reduced dependence on natural resources in favour of a more diversified economy.

The transfer of manufacturing jobs from Asia to Africa provides great potential for job creation, and the expansion of the new African middle class is also good for growth. He points out that Africa now has more middle-class households, defined as those with incomes of $20,000 or above, than India.

It’s not all plain sailing, of course. Africa will have to deal with the “youth bulge” – the fact that most of the future world population growth will take place on this continent. This poses both opportunities and challenges – the former because a youthful labour force makes for a dynamic economy, but the latter because all these new youngsters will need to be educated and given jobs.

There are other risks: a huge hike in the oil price would dent African prospects, as would increasingly erratic weather patterns, given the agricultural dependence of many African countries.

To ensure continued South African growth, Stiglitz identifies the key issues of unemployment, re-industrialisation and creating a dynamic economy. To this end, he considers a more competitive South African exchange rate to be absolutely critical.

“Do not let exchange rates continue to appreciate,” he warns. “You are going to have to intervene. Direct intervention in the exchange rate is not costless, but it is less costly than letting your exchange rate appreciate.” This effectively spells doom for the country’s export sector.

Stiglitz doesn’t believe it’s useful for countries to be hung up on the idea of a strong currency, and thinks governments often become fixated on the notion for reasons which are more symbolic than economic. “People get confused between the notion of currency as a symbol of a country’s strength, and the notion of currency as a price,” he says. “I don’t like to use the word ‘strong’ about currency. We don’t say ‘a strong price of oranges’.” There are a large portfolio of currency-control instruments countries now know they can use, Stiglitz says, so use them.

Time is up. As Stiglitz prepares to leave, someone shoots a last question at him: will Barack Obama take the US presidential elections?

“Probably, but it’s going to be close. The one big thing he’s got going is that Romney doesn’t pay taxes,” he says, and chuckles sardonically. DM