There’s something about Boris 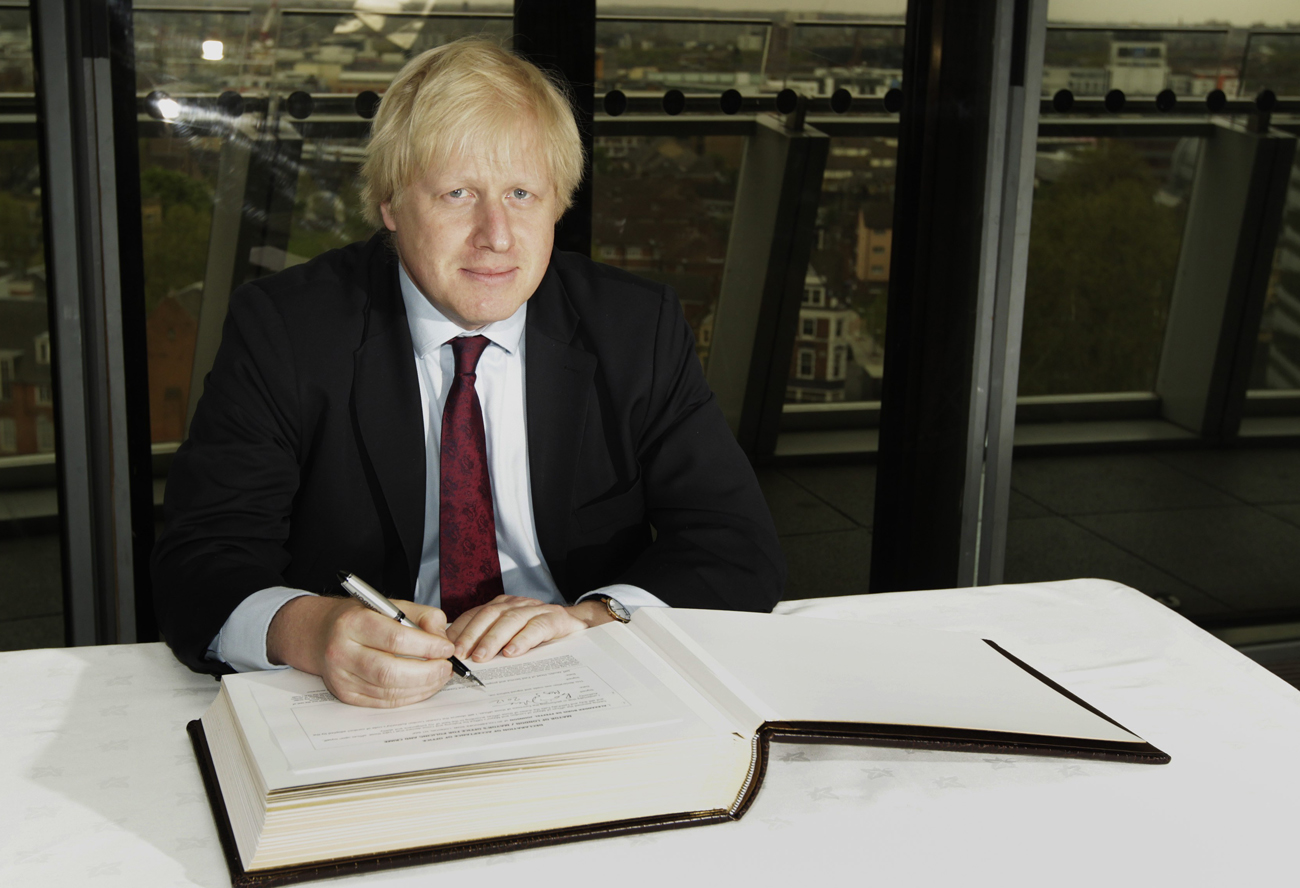 London mayor Boris Johnson, a true-blue Tory, defied the Conservative Party’s waning popularity to be voted in for a second term. While the Tories must be relieved, you can bet leader David Cameron has mixed feelings. By REBECCA DAVIS.

For many years people saw Alexander Boris de Pfeffel Johnson as being as ridiculous as his name and his hair. He was fired from his first job as a journalist on the Times for falsifying a quote. He was fired from the Conservative front bench by Michael Howard in 2004 for having an extramarital affair and lying about it.

Since then there have been disasters aplenty for Boris Johnson, mainly along the lines of spectacular gaffes or politically incorrect quips. But there has also been a rapid ascendancy, over the past five years, to take on the mantle of Britain’s “Best Loved Politician”. It is revealing that Johnson is the only major UK politician routinely referred to simply by his first name – an indication of the sense of familiarity the public feels with him. Yet in many ways it is bizarre that Johnson would have succeeded in winning the hearts and minds of the UK rank-and-file, given that the man is as posh as they come in a country where class tensions still run deep.

Educated at Eton and Oxford, Johnson has a cut-glass English accent and an encyclopaedic knowledge of Classics (his Oxford major), which he puts to use in political speeches at any opportunity. Johnson’s Oxford days were chronicled in highly entertaining fashion by a 2009 Channel 4 docudrama called When Boris Met Dave, focusing on the relationship between Boris Johnson and David Cameron. Part documentary, part fictional reconstruction, the film charted their meeting at Oxford and shared membership of the Bullingdon Club, the gentleman’s drinking society for Oxford’s richest and rowdiest young bucks.

The film takes as its starting point the now infamous photograph of the bowtie-and-tailed members of the Bullingdon Club in the mid-80s, which the Labour Party has tried to disseminate as widely as possible because, in prominent place, are a floppy-haired young Johnson and young Cameron. The film’s thesis (other than the idea that David Cameron was never really that cool, but had no trouble “pulling birds”) was that the rivalry between Boris Johnson and David Cameron was inculcated very early, and has now been brewing between the two for nigh on three decades.

Yet while David Cameron and chancellor George Osborne have tried (quite unsuccessfully) to de-stigmatise their wealth and posh roots, it seems Johnson couldn’t give a toss. He described the £250,000 he earns a year writing columns for The Telegraph as “chicken feed”. His entire public schtick is anachronistic, built around the image of the bumbling aristocrat, a sort of Hugh Grant writ large. And the UK public loves it.

Why? The simple answer is: the man is funny. He loses no opportunity to make a joke. A press conference with Johnson is akin to a stand-up comedy routine. He never walks away from an interview without dropping a few good lines. “The thing about two pints at lunch is that you don’t feel drunk, you just feel ever so slightly superb,” he earnestly told The Guardian in an otherwise serious interview in 2009. In a 2008 speech to mark the official handover of the Olympics from Beijing to London, Johnson went all out: “And I say this most respectfully to our Chinese hosts who have excelled so magnificently at ping pong. Ping pong was invented on the dining tables of England in 19th Century. It was, and it was called ‘Whiff Whaff’. And there you have one of the essential differences between us and the rest of the world. Other nations – the French – looked at a dining table and saw an opportunity to have dinner. We looked at a dining table and saw an opportunity to play Whiff Whaff.”

In his columns for The Telegraph, while he espouses extremely conservative views, he does so with witty good humour. In a recent column, discussing the question of why Britain has yet to produce a Mark Zuckerberg-style tech billionaire, he wrote: “It is not as though we lack potential Zuckerbergs. Our universities are pullulating with brilliant young men in T-shirts who like playing Call of Duty and have slight difficulties with girls.”

But to read him purely as such is to dangerously underestimate the man. Under the jocular posh-boy act lies a steely intellect and a sharp ambition. Pair that with his widespread popularity, and you have a figure who may start giving David Cameron sleepless nights.

It wasn’t all plain sailing for Johnson in this year’s mayoral campaign, however. It came as a surprise to many when Johnson made it through the first time round, taking up the mayoralty in 2008. In his four-year term, he has made some unpopular moves: Labour has repeatedly painted him as putting the needs of big business and the rich above those of the average Londoner. Under Johnson, public transport fares (every Londoner’s biggest bugbear) have risen, while he has made it easier and cheaper for the wealthy to drive within London. He championed the idea of adding a third runway to Heathrow Airport, in the face of stiff opposition.

Johnson has also been tainted by the Murdoch scandals. At the end of April he was accused of having courted News International for sponsorship at the same time as the corporation was being investigated for phone-hacking. At this juncture, in terms of his position as mayor of London, Johnson had constitutional responsibility for Scotland Yard. Johnson also initially dismissed the rumours of phone-hacking taking place at News International as “codswallop”.

In his mayoral campaign he was aided, however, by being up against Labour’s candidate Ken Livingstone, Johnson’s predecessor as mayor. Because Johnson beat him last time around, Livingstone was widely seen as an old, tired option lacking fresh options for London. The death-knell for Livingstone, however, was probably when the politician they dubbed “Red Ken” for his alleged socialist agenda was found to have ducked on a £50,000 tax bill by routing funds through a company owned by his wife.

Aware that Livingstone probably didn’t have the necessary pizzazz to win the electoral contest on his own merits, Labour sought throughout to play up the ties between Boris Johnson and the unpopular coalition government, printing posters displaying Johnson, Cameron and Osborne as blue-faced aliens from another planet.

But this tactic simply didn’t work, partly because Johnson himself was at pains, at every stage, to play up his independence from the Tory top brass. It was a shrewd move. As the local election results proved, England is growing ever more gatvol of the Conservatives. As of the end of last week, Labour gained more than 800 seats and several key municipalities. David Cameron apologised for his party’s disastrous performance.

But Boris took London. Not by very much – 62,000 votes, a drop in the ocean considering that 2,2 million votes were cast by Londoners in total. It is speculated that the fact that Johnson did not win by a wider margin was due to many supporters assuming his victory was certain and their votes unnecessary.

After the results had been tallied, and Boris Johnson was confirmed as mayor of London for four more years, Johnson joked: “We survived the rain, the BBC, the Budget – and the endorsement of David Cameron”.

There is now more incentive than ever to take Johnson seriously. Betting agency Ladbrokes is giving him 3:1 odds on being the next Tory leader. London government expert Tony Travers told the Evening Standard: “There’s no doubt that Boris has proved in this election that he does not just walk on water, but walks on stormy water.”

Is David Cameron feeling Johnson snapping at his heels? Of course, he can’t admit to that, and has denied feeling threatened by Johnson’s popularity. “Boris is his own man. We are in the same team, in the same party. When I see Boris succeed I think, ‘good’.”

That’s almost certainly a bit of a fib. The two politicians are very different. Cameron is all smooth, slick business, whereas part of Johnson’s appeal lies in his supposedly unpolished, “authentic”, often off-message presentation. Then there’s the fact that people associate David Cameron with austerity cuts and a double-dip recession, whereas Johnson is like the fun uncle who brings a hipflask to church.

For now, though, Johnson is brushing aside claims he has designs on leadership of the Tories. He told the Evening Standard: “If I am fortunate enough to win, I’ll need four years to deliver what I’ve promised. And having put trust at the heart of this election, I would serve out that term in full.”

He has said in the past that the chances of him becoming prime minister were equivalent to his “being locked in a disused fridge or decapitated by a Frisbee”. Elsewhere he has compared the likelihood of his assuming the Tory leadership to “as good as being reincarnated as an olive”. Neither of these outlandish analogies are likely to stop David Cameron looking over his shoulder. DM Photo: London’s Mayor Boris Johnson poses for a photograph as he signs the declaration of acceptance of office for the Mayor of London at City Hall in central London on 5 May 2012. Johnson, whose popularity is largely down to his comic talent and colourful past, won a second four-year term as mayor of London on the same day that his Conservative Party suffered heavy losses in nationwide local elections REUTERS/Luke MacGregor.