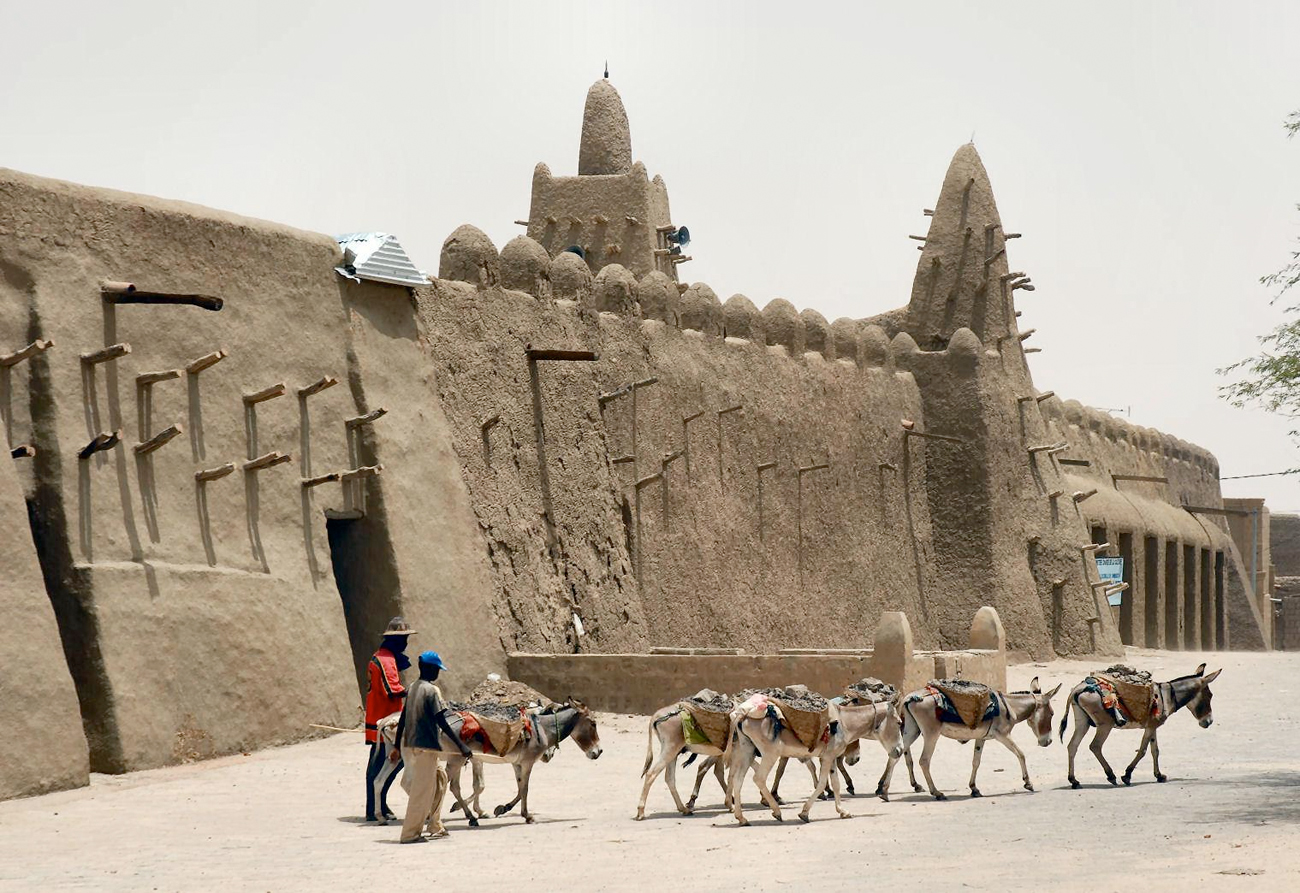 Historians’ worst fears are coming true as Timbuktu’s new rulers set fire to an ancient tomb, just one of the city’s many World Heritage sites. And this is just the beginning, says Ansar Dine, the Islamist group whose fundamentalist dogma threatens to destroy Africa’s most fabled city. By SIMON ALLISON.

They call Timbuktu the city of 333 saints. That’s how many holy men have wandered its dusty streets, according to locals, who swear they can list them all. Others are more prosaic, acknowledging that the number is but a symbol in a place with such a long and spiritual history, the real number is far more, they argue.

Sidi Mahmoud Ben Amar was one of the saints, a 15th century Islamic judge and scholar who was buried in the city. His tomb became a holy place, venerated by pilgrims and, a few decades ago, by Unesco, which added it to its long list of World Heritage sites in Timbuktu.

The city is arguably the most historically important city in Africa. Tourists, scholars and pilgrims alike marvel at its immense mosques, built of earth and straw and looking for all the world like giant sandcastles in the desert; at the shrines of the saints; and at the wealth of ancient letters and documents that have been preserved for centuries and together make up the largest collection of written artefacts in Africa, testament to the refined and sophisticated culture that flourished on the continent long before colonisers arrived on their civilising missions.

Not everyone is so impressed with Timbuktu’s unique heritage. The city’s new government – if we can call it that – is a rag-tag bunch of rebel militia who seized control of the city in the aftermath of the military coup that unseated Mali’s president and, at a stroke, destroyed the country’s promising but fragile democratic development. Ironically, the coup-leaders justified themselves by blaming the government for being too soft on the rebels that now hold Timbuktu and all the other major cities in Mali’s sparsely populated northern region. As it turns out, even a weak government is more effective at containing a rebellion than the anarchy precipitated by a coup.

Timbuktu itself is held by a faction of the rebels known as Ansar Dine, although their control is not absolute. Like the other main rebel faction, the People’s Movement for the Liberation of Azawad (MPLA),  it is led and dominated by Tuaregs, a nomadic tribe that has never recognised the authority of the Malian state. Unlike the MPLA, which defines itself as secular, Ansar Dine is explicitly Islamist, and wants to create an Islamic state across the whole of Mali. Theirs isn’t the rather loose, spiritualist interpretation of Islam usually found in this part of the world. Ansar Dine subscribes to a particularly harsh and dogmatic set of beliefs, having much more in common with other radical groups such as Al Shabaab in Somalia, the Taliban in Afghanistan and the ruling family of Saudi Arabia.

One of these beliefs is that the worshipping of shrines is idolatrous and haram – forbidden. This is bad news for Timbuktu. The 16 WH sites are now 15 after Ansar Dine militants destroyed the tomb of Sidi Mahmoud Ben Amar.

Reports from the city indicate the militants broke off doors, windows and wooden gates from the grave and burned them and then set fire to the tomb itself. An official, speaking to AFP on condition of anonymity, feared Ansar Dine would not stop here. “They promised to destroy other tombs, Timbuktu is in shock. Now they want to take and control other tombs and manuscripts.”

There is a long and ignoble history of iconoclasm for millennia, but in recent times Muslim iconoclasm has been grabbing all the headlines. It’s forbidden to depict the Prophet Mohamed in any way, be it in a painting, a sculpture, or – most controversially – a cartoon. Particularly conservative branches of Islam argue against any depictions of humanity, which is why so much Islamic art is based on geometric shapes and patterns rather than portraits and landscapes. And to fundamentalist groups such as the Taliban, and Ansar Dine, shrines and monuments that inspire worship of someone other than Allah are sacrilegious in the extreme. The Taliban were guilty of causing the most grievous damage to our global heritage when they blew up two massive and ancient statues of the Buddha in the area of Bamiyan.

Now it’s up to the ordinary people in Timbuktu to protect our shared heritage. The Malian army is in no shape to re-take the city, and it will be months before any outside force can be assembled – not that Timbuktu’s delicate buildings will fare very well with all the mortars and bullets a battle for a city entails.

Already, reports have suggested that portions of the Timbuktu manuscripts and precious artefacts have been removed from museums and stored in people’s homes for safekeeping. But the best hope for Timbuktu is some kind of negotiated settlement, a political compromise that protects Timbuktu’s history and its people. Given that former president Amadou Toumani Touré was ousted by his impatient military because he pushed for just such a settlement, it is an unlikely solution, leaving priceless though shared history in the form of Timbuktu’s monuments and manuscripts more vulnerable than ever. DM