Mdluli’s off the Madonsela hook – for now 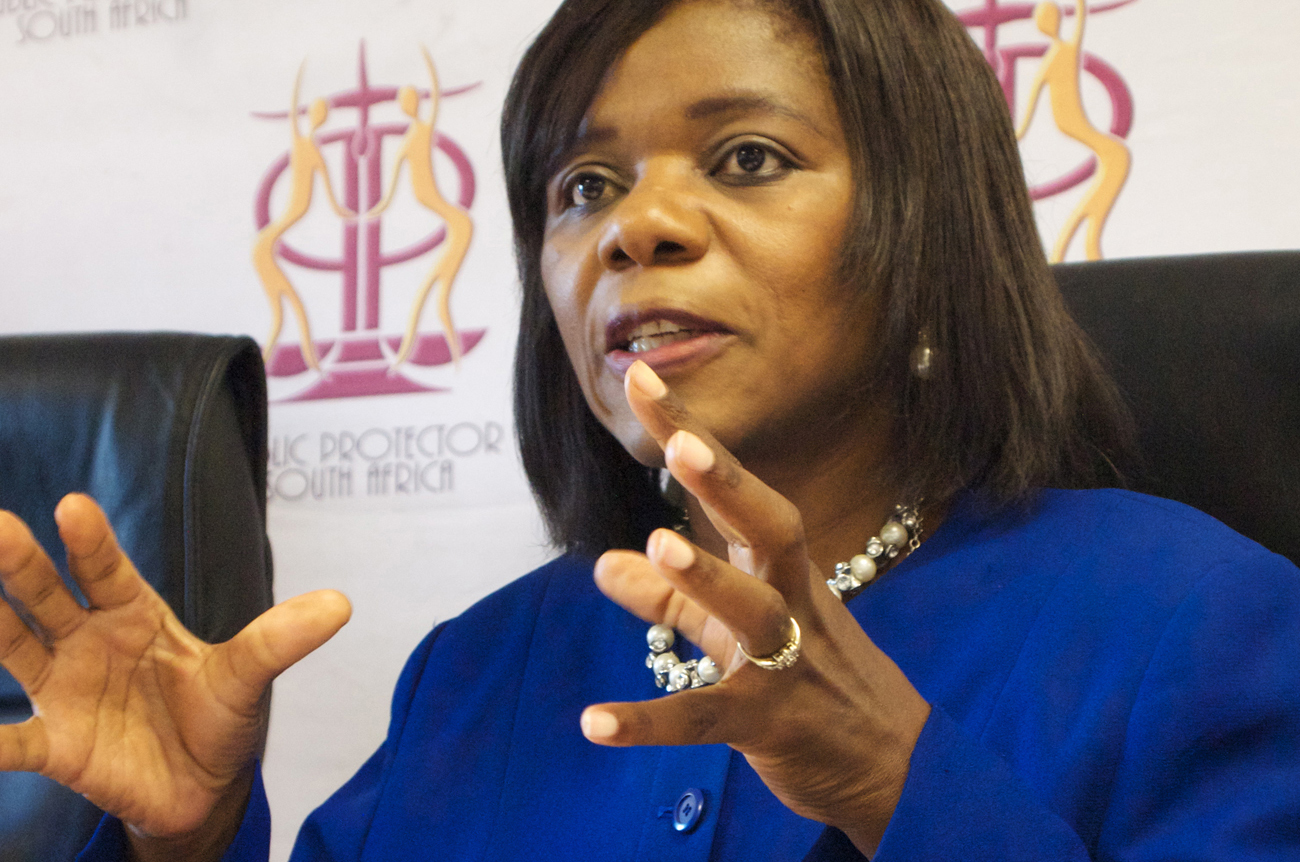 Who’d want to be the Public Protector? You hold your first media briefing of the year to discuss some of your successes thus far, and all anyone wants to talk about is why you won’t investigate the police spy boss. REBECCA DAVIS made sure she listened carefully.

Tuesday morning saw public protector Thuli Madonsela make her budget presentation to Parliament. The picture it painted was of an ombudsman doing a lot with relatively little.

Over the past year, the protector’s office has investigated more than 26,000 complaints, with over 50% of these finalised within three months. For the next financial year, their requested budget is about R3 per South African citizen, amounting to just over R174-million.

Their greatest challenge, Madonsela said, is the average workload of investigators, with each one processing an average of 254 complaints per month. She asked Parliament to increase their investigation capacity and establish a call centre with a fully staffed complaints hotline.

They also hope to increase accessibility by rolling out mobile public protector offices to all provinces, and establish profiles on Twitter, Facebook, YouTube and MXit to reach the youth.

The protector’s office is an interesting body, in that their job is not primarily to adjudicate what constitutes legal or illegal action by those in power.

“Our approach as an ombudsman is that our jurisdiction is not legality, it is proper conduct,” Madonsela explained. “Our scrutiny of state action goes beyond lawfulness: conduct must satisfy our sense of what we believe is right.”

What the body looks for is evidence of improper conduct, or maladministration, defined as “when public power is exercised outside the boundaries of (the) Constitution or law”.

As examples of the kinds of investigations the protector has undertaken over the past year, Madonsela described three cases. The first was a complaint lodged by a Dutch national about the failure of Home Affairs to process his family’s applications for work and residence permits dating back to 2003.

The protector’s investigation found that the family had been “severely prejudiced” by Home Affairs’ handling of the matter, and advised that “the minister must exercise her powers… to provide a remedy to the complainant and his family in relation to permanent residence”.

The second complaint discussed by Madonsela was lodged by DA MP David Maynier, regarding minister of defence Lindiwe Sisulu’s appointment of Paul Ngobeni as special advisor. Maynier alleged that Ngobeni was a fugitive from justice in the USA, where he had practised law in Connecticut, and was facing charges of unethical conduct. Maynier asked the protector to investigate whether Sisulu’s appointment of Ngobeni under these circumstances was in order.

Madonsela explained their investigation confirmed that Ngobeni was indeed a fugitive from justice in the US. However, the vetting of Ngobeni prior to his appointment by Sisulu had been carried out in accordance with regulations and, as such, Sisulu was not guilty of maladministration in appointing him. All the Public Protector could advise in this instance was that “the department of defence and military veterans must take the necessary steps to tighten its vetting processes”.

Madonsela’s final example related to the municipality of Moqhaka in the Free State, where the former municipal council was accused of having granted R500,000 to political parties in the council for electioneering in the run-up to the 2009 elections.

The protector’s investigation found that this grant was “unlawful, unconstitutional and therefore invalid”, and that the municipal manager should take “urgent steps to recover the unauthorised and fruitless and wasteful expenditure incurred in terms of the grant from the political parties who benefited from it”.

But everyone knew that the journalists present weren’t there to hear about the municipality of Moqhaka. They were there to receive an answer to the question on everyone’s lips: Would the public protector investigate the head of police crime intelligence, Richard Mdluli?

One of the Mdluli complainants to the protector was DA shadow minister of police Dianne Kohler-Barnard, who said on Monday there were “at least 15 reasons” why an investigation against Mdluli was warranted. The alleged rap sheet on Mdluli is now longer than President Jacob Zuma’s Valentine’s Day shopping list.

The claims include that Mdluli used a secret police slush fund to carry out renovations amounting to R200,000 on his home in KZN; that seven members of Mdluli’s family received jobs as secret agents, and luxury cars, after his appointment; that Mdluli bribed journalists to garner positive coverage for the SAPS; and that a fraudulent shortfall of over R90,000 occurred when one of Mdluli’s cars, a 7-Series BMW, was traded in for a 5-Series.

Then there’s also the 13-year old rumours that Mdluli had a part to play in the kidnapping and murder of Oupa Abel Ramogibe, the husband of his former lover. Murky stuff, indeed.

Speculation that Madonsela’s office might step up to investigate Mdluli has been growing since his mysterious reinstatement in March, following his suspension last year pending fraud investigations.

Earlier in March, inspector general of intelligence Faith Radebe had ruled that the National Prosecuting Authority should reinstate criminal charges against Mdluli. Her decision in this regard was allegedly questioned by both police minister Nathi Mthethwa and Zuma. Mthethwa went on to defy this by lifting Mdluli’s suspension.

A statement from the SAPS at the time simply read: “A decision was taken to lift the suspension of Lieutenant General Richard Mdluli. The resolution is with effect from 27 March 2012. This will not be discussed further in the public domain.”

The DA thus turned to the public prosecutor for help, causing higher education minister Blade Nzimande to claim last week that Madonsela was becoming the puppet of the opposition. Nzimande demanded to know why Madonsela seemed to be leaping on the Mdluli case with such alacrity when she had not yet taken action on a complaint about the SABC dating back two years.

At Tuesday’s briefing, Madonsela scoffed at the notion that she was playing favourites, saying the SABC case was taking longer because more elements kept being added to it, and that her office simply didn’t have enough resources to handle everything at once.

But anyone hoping that Madonsela would ride in on a noble steed to cast some light on the Mdluli issue was left disappointed.

“I have made a decision not to proceed with a full-scale investigation into Mdluli and the police minister,” said Madonsela. She explained that her office’s preliminary investigation had revealed that Radebe had not yet concluded her investigation.

Madonsela said it made sense to allow Radebe to finish because it would avoid “duplication of work” and “wasteful use of resources”. If, after Radebe’s investigation, the original complainants were not satisfied, Madonsela said her office could re-visit it. “We are a complaints body of last resort.”

That was a valid point, Madonsela said: the two bodies do have “different operational parameters”. But she stressed that she would be given access to Radebe’s findings.

Will she have access to every document Radebe looks at? “We didn’t discuss that,” Madonsela admitted. But, she added, perhaps as a tacit rebuke to journalists showing clear scepticism about Radebe’s capacity to carry out a full investigation: “The spirit in which it was discussed was that of assuming hers is a competent institution who will do the right thing and find out what actually happened.”

The Daily Maverick asked the DA’s Diane Kohler-Barnard for her reaction. She stressed the DA’s “100% support” for the public protector and said she ascribed Madonsela’s caution about getting involved at this stage to her characteristic respect for people in equivalent positions.

Kohler-Barnard said, however, that she considered the inspector general of intelligence to be “completely compromised” and that any investigation emanating from her office is unlikely to “cover all the bases”.

“I believe I will not be satisfied with the findings,” she concluded. At which point, we can assume, Thuli Madonsela’s phone will start buzzing again. DM