Being a moffie from Zeerust in libertine lanes of Amsterdam 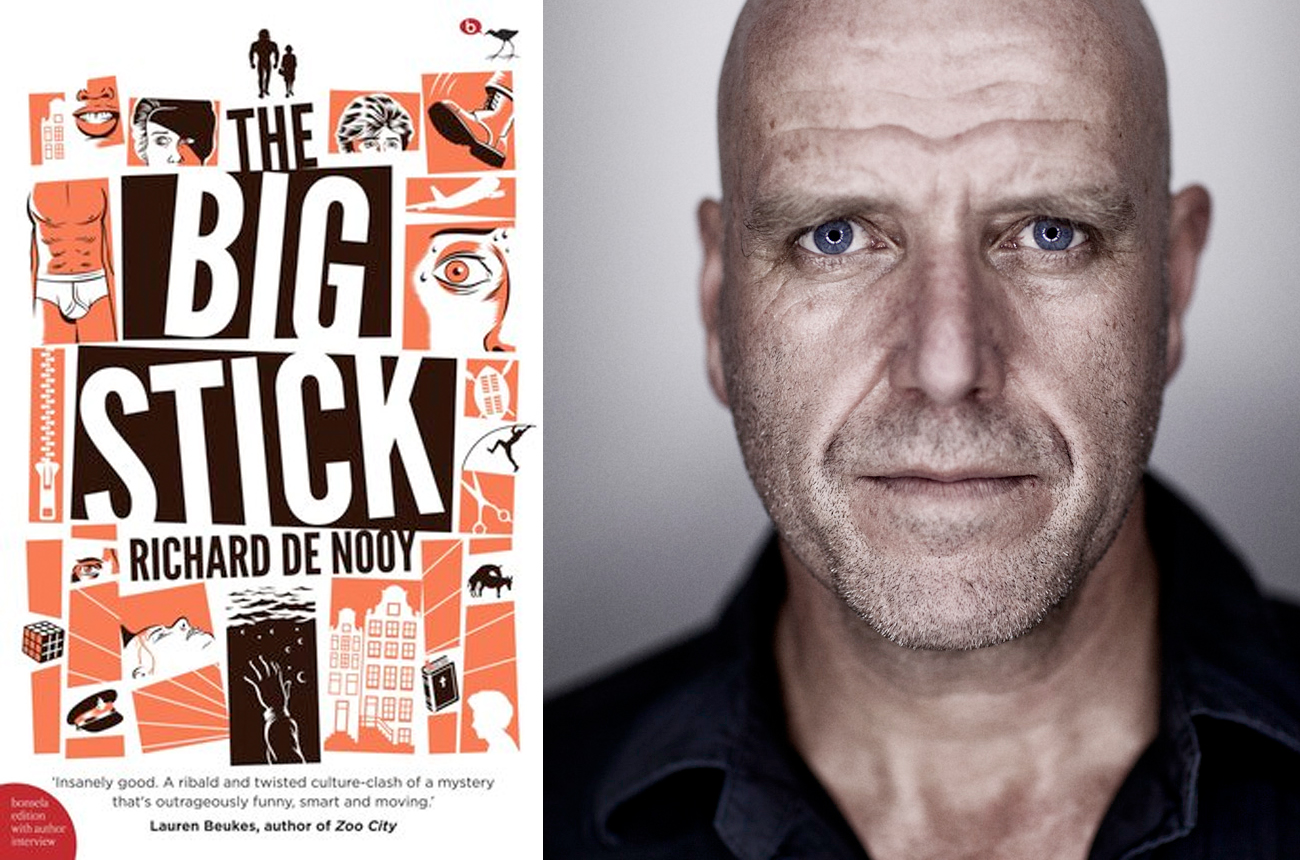 The Big Stick is Richard de Nooy’s second novel. In it, Alma Nel, bereaved and bewildered battleaxe, journeys from Zeerust to Amsterdam to investigate the circumstances surrounding the death of her gay son, Staal.

De Nooy doesn’t think of his work as the product of a particular literary tradition: “I made no conscious effort to place the book within a certain track or frame, although I fully understand that it is likely to be considered within certain traditions and compared to precursors. If anything, I hoped that the book would give straight people – people who might never pick up a book from the ‘Gay’ section of the bookstore – greater insight into various aspects of gay lives, by weaving various issues into a story that readers would find interesting and entertaining… I set out to tell a story, not to write a controversial novel.”

Be that as it may, The Big Stick does deal with some of the concerns specific to “queerlit”, and Staal’s evolution from mere moffie to twink is the central preoccupation of the book. His sudden and unexpected happiness makes the circumstances of his death all the more poignant.

With the exception of Mark Behr, South African writers have tended to approach the subject obliquely. Michiel Heyns’s Lost Ground and The Reluctant Passenger, and Damon Galgut’s In a Strange Room do not locate homosexuality as their central theme, however much that informs the work. Similarly, De Nooy’s speciality is the history of underdogs, outsiders and rogues. In places The Big Stick intersects with the gentle humour of Heyns and the precision and elegance of Galgut. That said, De Nooy’s fiction diverges from its predecessors’ because it is so brash and electrifying. His protagonists are bourgeois picaroons, men who find themselves compelled to reject the known – largely because they have, as children, been rejected by it.

Received notions make a simple distinction between good and evil: in De Nooy’s fiction, that binary is less clear. The criminal or deviant mind is also the mind that questions authority, morality, purpose. De Nooy likes to speculate: he turns over the idea of “how different things might have been… What if I had been gay and my mother had been forced to come to Amsterdam to retrieve my body?”

The Big Stick invokes the oppression of the universal small town, where your business is everybody’s business and you can have any colour you like as long as it’s khaki. In 1980s Zeerust, tolerance of non-conformity is at an all-time low and the lonely and protracted suffering that underpins the homosexual childhood ranges from the usual viciousness of the locker-room all the way to the screaming, hardcore torture of “corrective” electro-shock “therapy”.

Initially addressed to the dead Staal himself, the work rapidly concertinas into multiple points of view, the plurality of voice mimicking the ubiquitous mirrorball of the gay clubs he discovers – the very antithesis of Zeerust, where there is a single master narrative and no goddamn dancing in front of the mirror. “Deo”, the quasi-omniscient narrator, presents the accounts as pieces of the larger tale, a nod to the detective who gathers all the characters in the library and proceeds to explain whodunit. The Big Stick, however, is only nominally a mystery. The book is an elegy to homo paradiso, a way of life that existed briefly and then only in societies populous enough to contain diversity in all its forms.

De Nooy is especially adept at inhabiting the minor characters. The changes in voice are superlative, and some of the best writing in the book is the verbatim interviews with and transcripts of various experts and relatives – because they are utterly believable.

The major characters are less credible, largely because they are hamstrung by their dialogue. The words of Staal himself; the pilgrim Alma, his confused “mudda”; and her dreadlocked guide, Sheikh, are rendered phonetically. This interferes with the pace and timing of the novel, and is unnecessary as a device. De Nooy relates that the original Dutch version, which he wrote first, focused on the interplay between two completely different languages – Afrikaans and Dutch – while the English version relies on idioglossia. Both versions necessarily set language up as obfuscatory: the most basic elements of meaning must be negotiated as the preface to communicating significantly about larger lifestyle choices. (This sharing of meaning is the very opposite of Polari, Gayle, or isiNgqumo – the gay slang which is intended to exclude outsiders, as all dialect and jargon does.) The jokes and misunderstandings are integral to Alma’s awakening, but they are heavy going.

In terms of style, De Nooy speaks softly, but carries the titular. His trademark is the juxtaposition of vulgarity and lyricism, the entertaining fusion of African and European sensibilities. This idiosyncrasy – the literary flasher in the raincoat – is what makes him such an exciting writer.

The sex in the book is pretty pervasive, a feature common to any writing about homosexuality. De Nooy seems puzzled that, while no Dutch readers and reviewers commented on its regularity of occurrence or stylistic handling, it’s all we South Africans are talking about. He explains that “it serves almost as a rite of passage for the characters. I therefore opted to describe it in somewhat mythical terms. I also believe my readers are perfectly capable of joining the dots for themselves… The sex scenes in my book [describe] an integral part of the interplay between characters, their developing relationships, their needs and desires, the assignment of roles and status. They describe the oft unseen fantasies and behaviours that are an essential part of human existence. That is what makes novels so powerful: they go where we dare not tread in everyday life.”

There are lots of dots there for the joining. The cheerful, stereotypical filth of Dirk and Martyn, the symbolic baptism of Staal in a session of stranger-led Soggy Biscuit, the sexual awakening of the repressed Alma all feed into the mythology of gay-ness that Amsterdam ostensibly allows. The Big Stick is also a love song to that city, where sexual freedom mirrors the apparent permissiveness of liberty in its other forms. Here, on its streets and in its bars, Staal can live according to the Homo Code and feel that he has come home at last.

Except, of course, that he hasn’t. Amsterdam is home to more libertines than libertarians, and the novel is bookended with Staal’s death, far from his birthplace. Both times the scene is a shock to read, bothersome and powerful stuff.

The best fiction works because it bleeds into the real, and The Big Stick reminds us that we still live in dangerous times. “Fascism” is a word you don’t hear much in South Africa: when you live with it daily it’s just the way things are. But when gay women are at risk of gang-rape and murder, it’s fascism that’s alive and well and we could do worse than remember that.

The Big Stick celebrates a particular brand of camp and promiscuous homosexuality, but it is really a book about homecoming, about belonging, about a sense of place. That it is hardly ever a geographical construct is De Nooy’s point. The quest for identity is always fraught: we find ourselves at our peril. DM